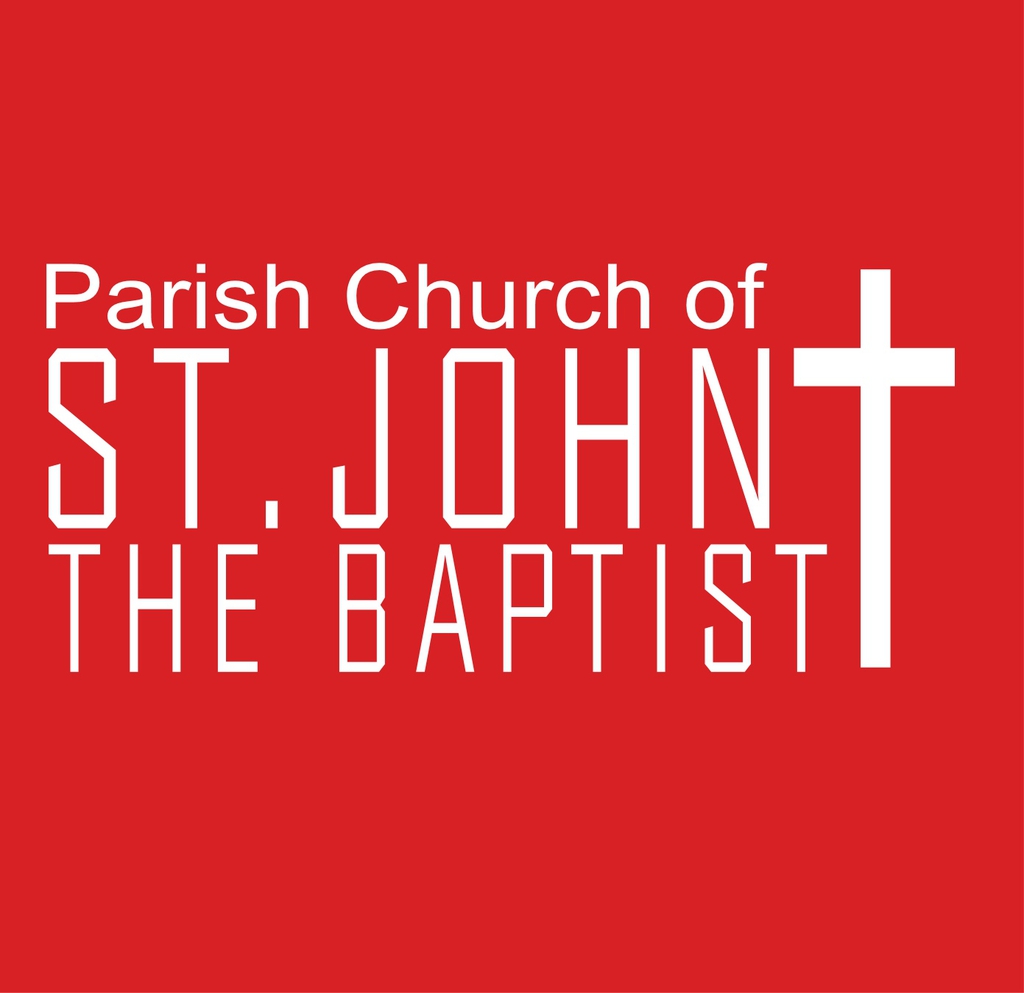 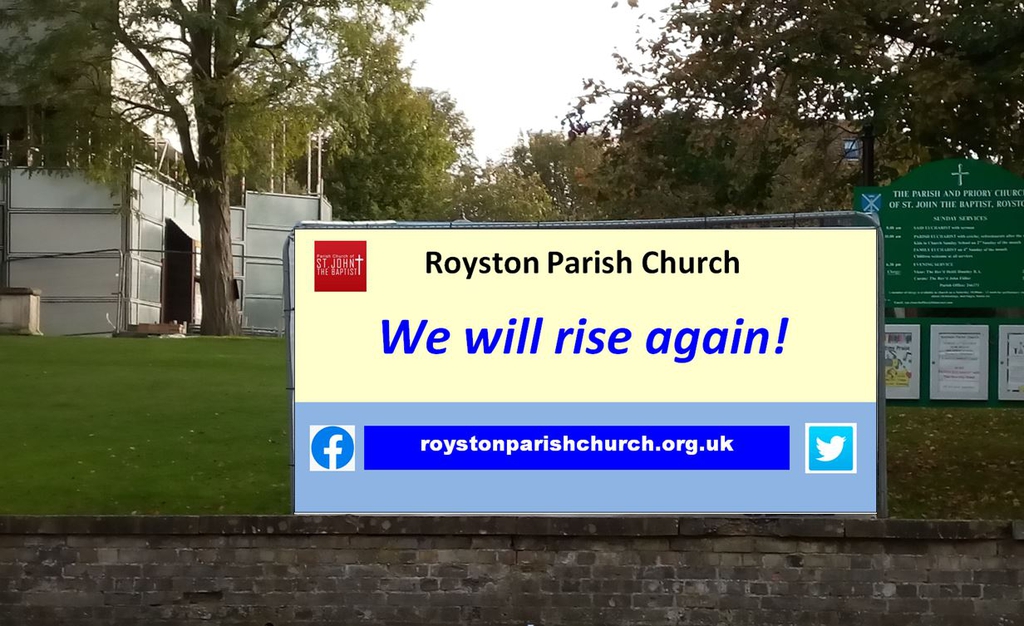 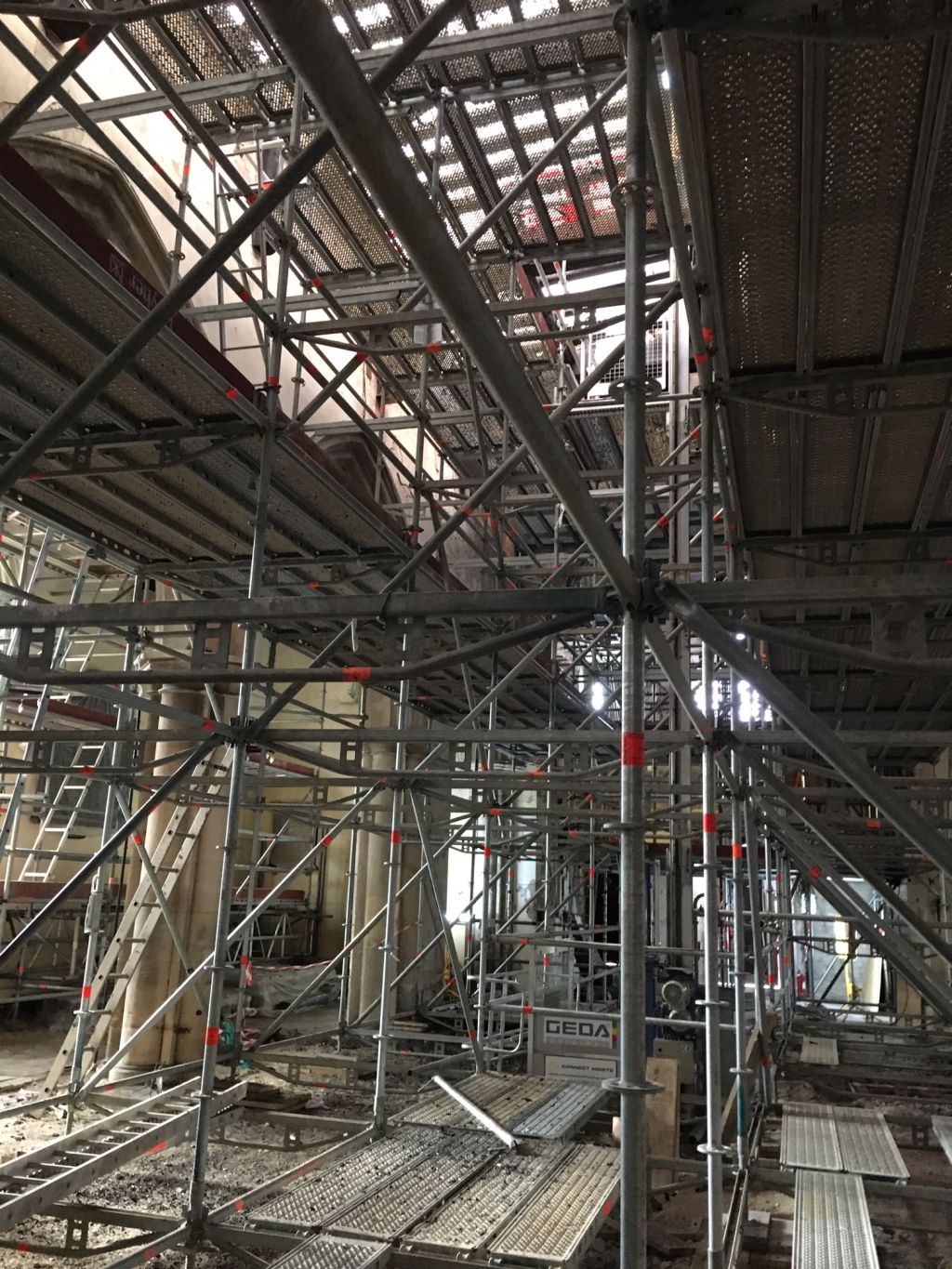 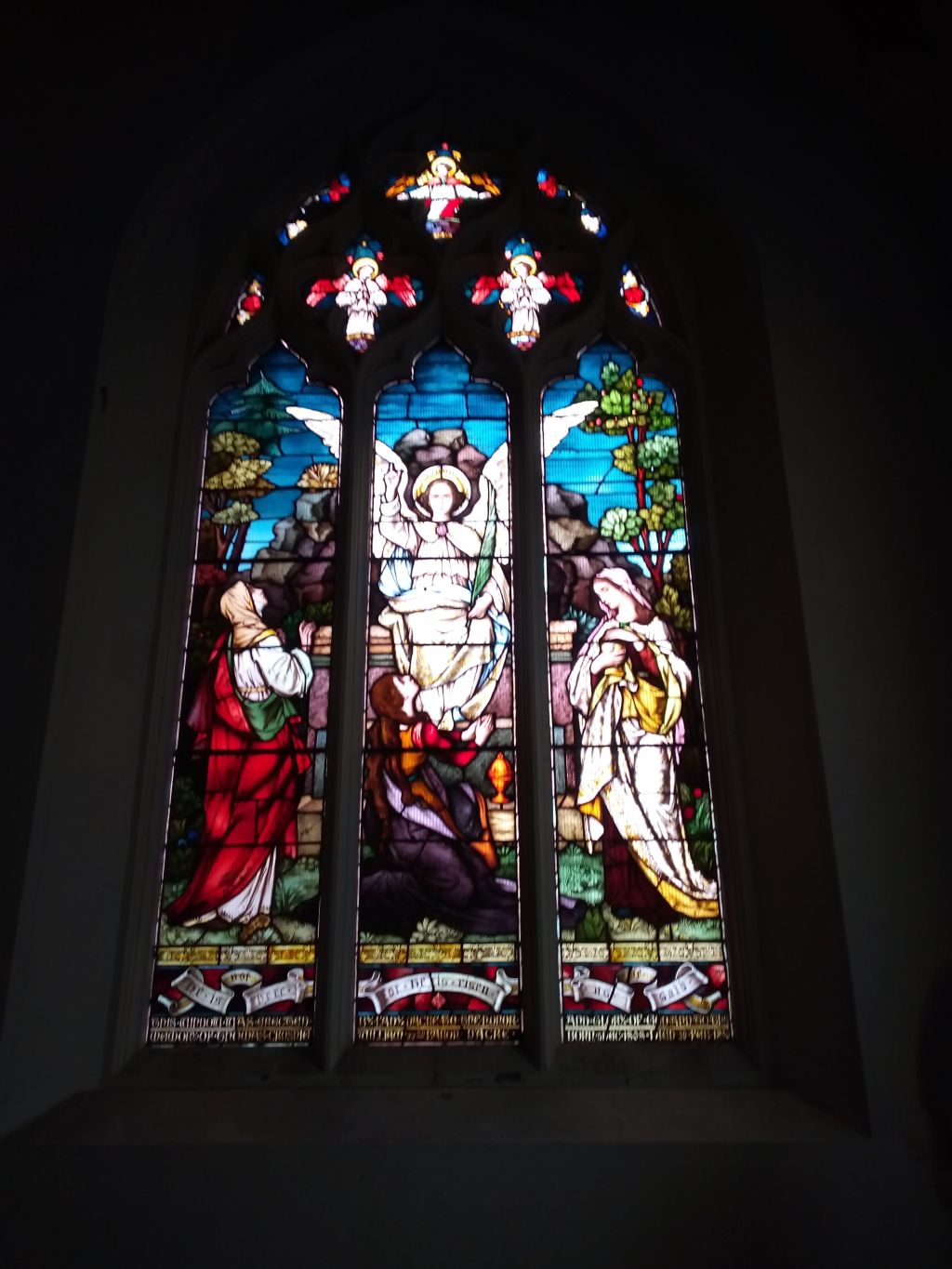 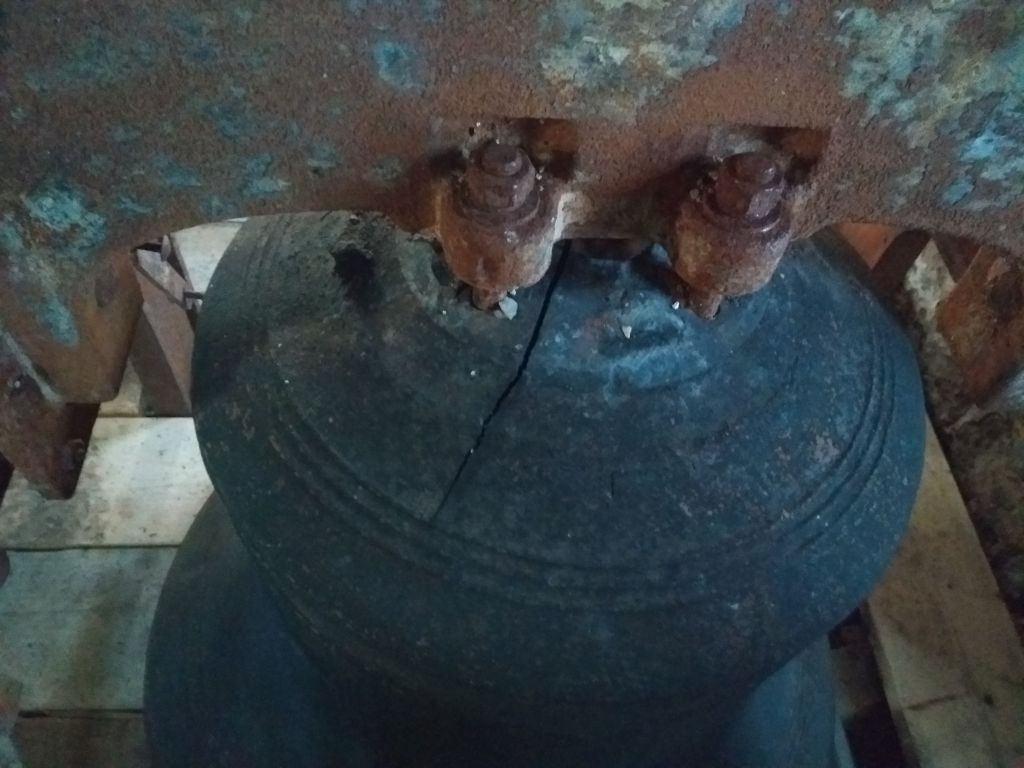 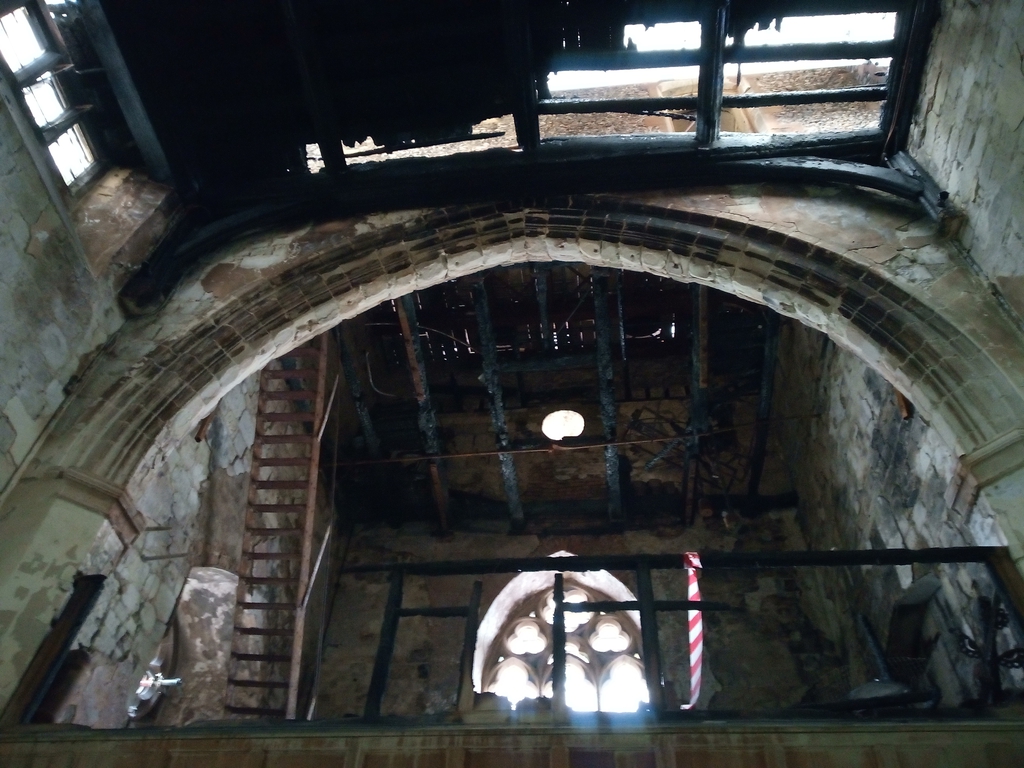 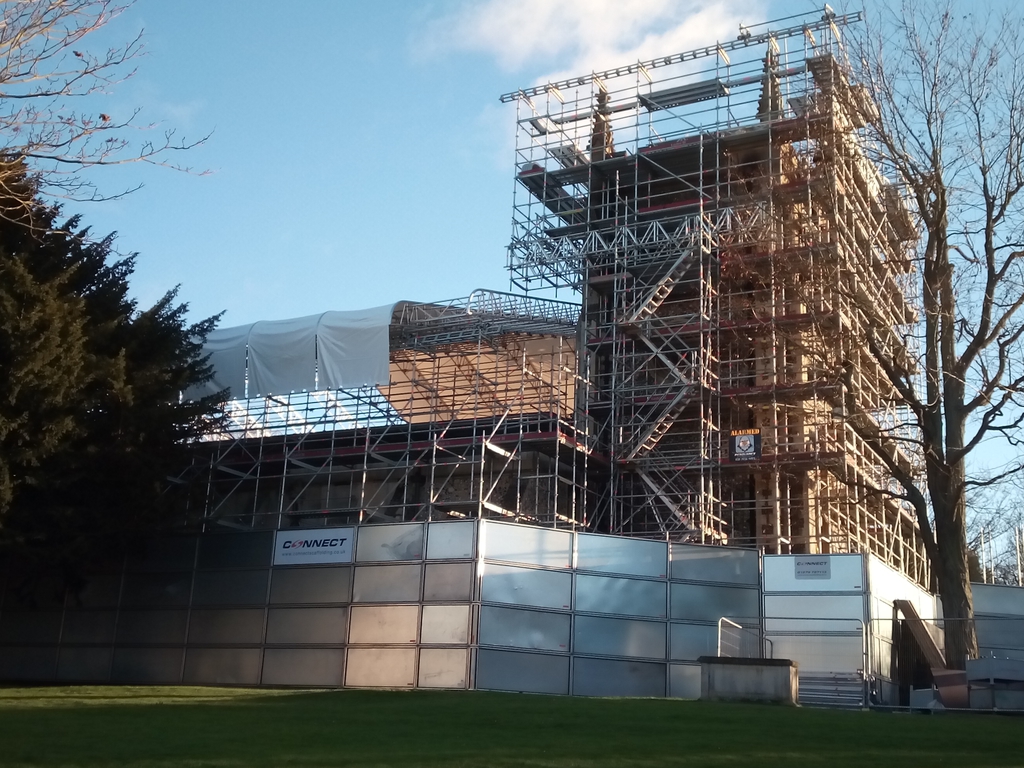 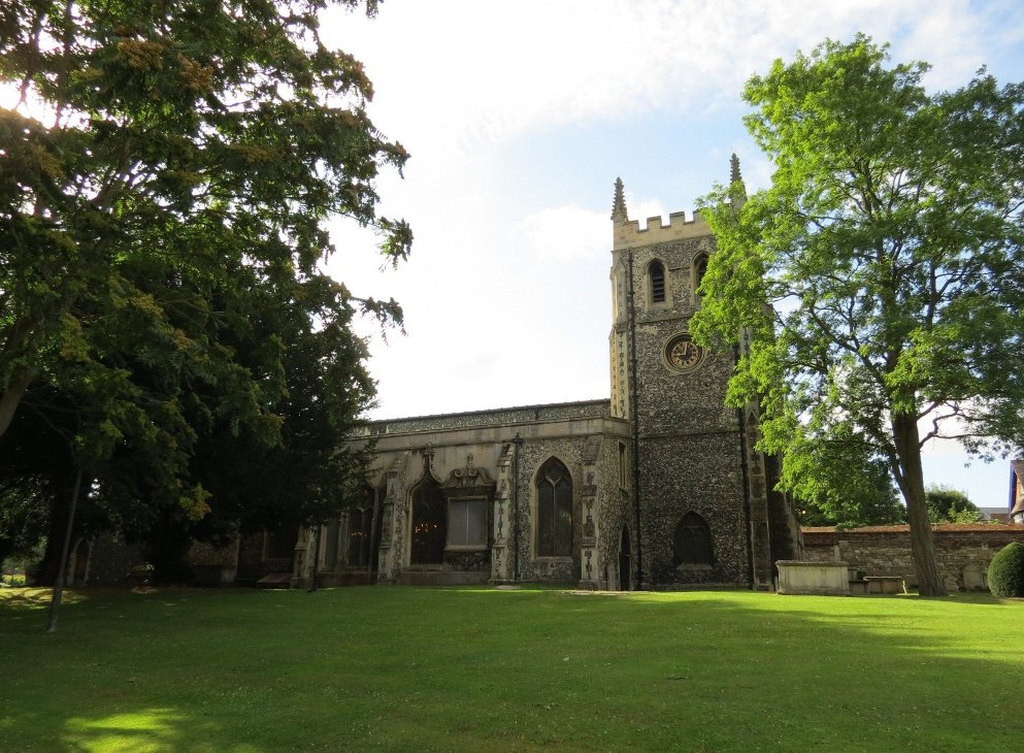 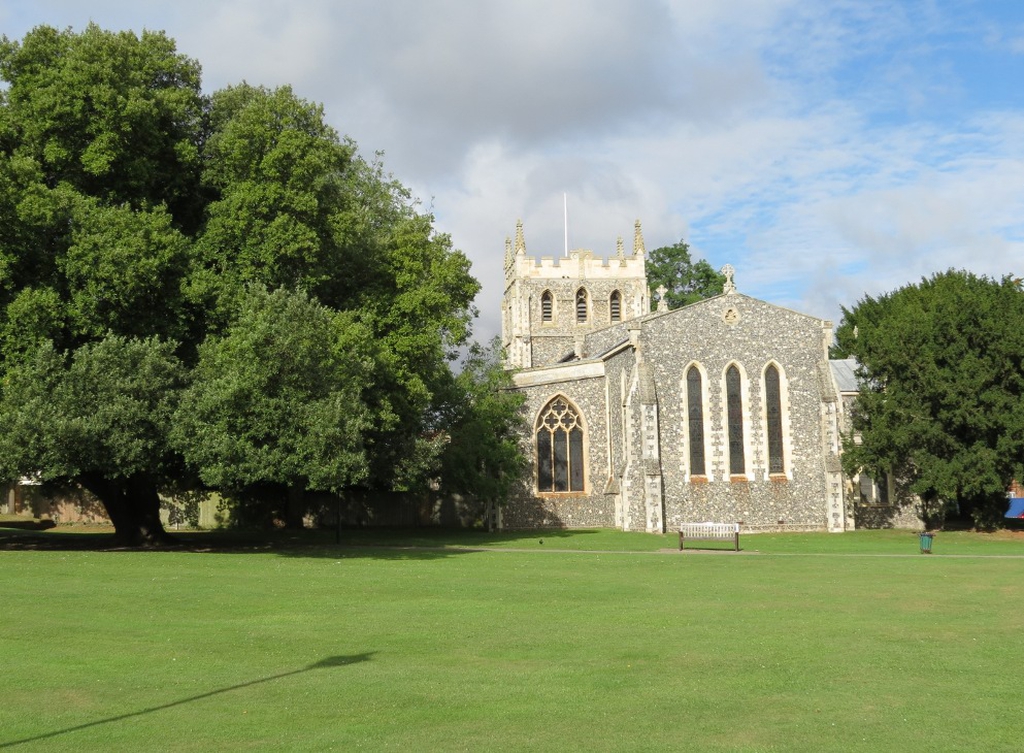 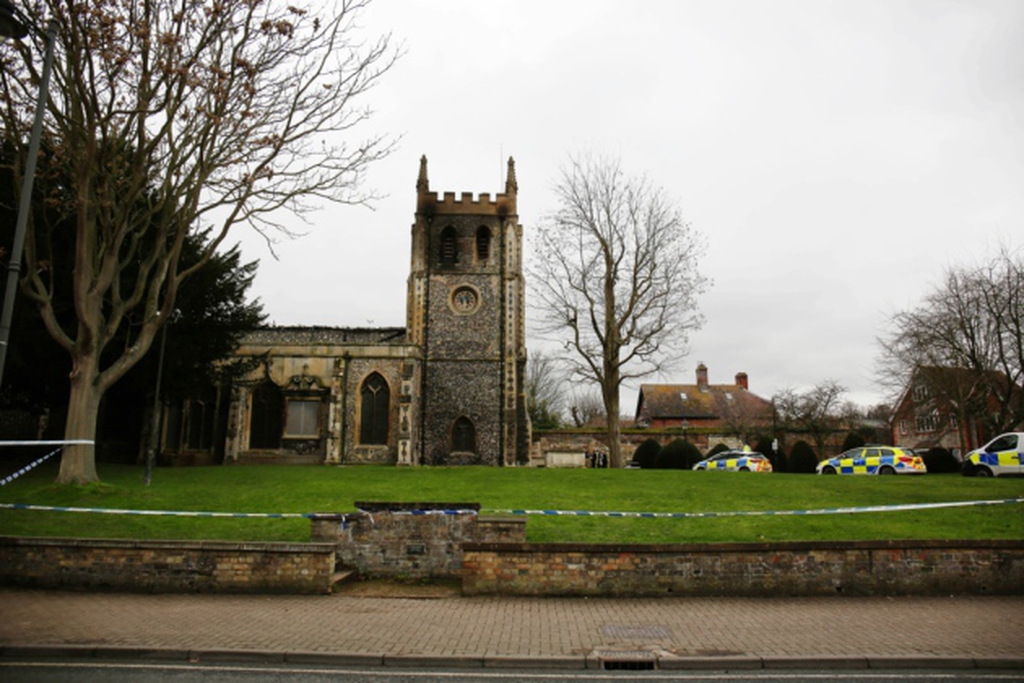 St John the Baptist
Services and events
News and notices
About us
Online Service
Safeguarding
Sign up for regular news
Website
Find us
Get in touch
07935 774633
Facilities
More information
Social
Edit this Church
Church of England Diocese of St.Albans Royston

Since the fire, a few of us have been inside the church; during those 21 months it has been in varying stages of recovery, and more recently we’ve seen photographs taken by the builders which are showing their great progress. One could say we’ve been privileged to see the church in this state, but it’s actually been quite traumatic at times seeing our glorious House of Prayer reduced to such a sooty wreck. After the initial phase of clearing away all the debris and damaged pews, and all salvageable items such as the altars, pulpit and statues either removed or covered, what struck me was just how big our church is. With the nave completely bare of all furnishings, one could see the true scale and it’s huge! I’m not daft enough to think it’s a small building, but I’ve somehow become acclimatised to its size in the time I’ve been here, and it was only seeing it empty that I saw it through fresh eyes. The size of the stones used when the church was built are enormous and I have nothing but admiration for the dedication of those who literally took a lifetime to create such incredible buildings to the glory of God. When I now read Jesus’ words about him being the cornerstone, and I remember the size and strength of the stones of our church, it’s a visual reminder of how strong and vital he is to each of us.

In our Gospel reading set for today (Matthew 21:33-end), Jesus has just arrived in Jerusalem for the last chapter of his earthly life. He knows his path is leading to the cross, although no-one else knows this yet. Jesus has told the Chief Priests another parable which basically seals his fate. Why? Because he says that he is God’s son; that was blasphemy and was punishable by death. He tells them the parable of the vineyard and is undeniably referring to the prophet Isaiah (5:1-7). Here Isaiah names Israel as God’s unsatisfactory vineyard, and Jesus clearly presents himself as the Son who the tenants kill. I wonder if any of those Chief Priests remembered Jesus’ words as he was crucified and his prophecy was fulfilled. Jesus completes this part of the parable with a stark warning, “The owner will put those wretches to a miserable death, and lease the vineyard to other tenants who will give him the produce at the harvest time” (v.41). Once again, Jesus is saying that God’s love is for all who love him, not just through some misguided sense of entitlement.

Jesus then quotes Psalm 118 as he says, “The stone that the builders rejected has become the cornerstone; this was the Lord’s doing, and it is amazing in our eyes” (v.22). Jesus knew he was going to die, but he also knew he would be triumphant. Despite his approaching suffering, Jesus knew he would become the keystone, the most important stone of all - the stone that so many were about to reject in the last days of his life on earth. Only after his death did people come to realise their grave mistake, such as the centurion who was guarding Jesus’ body who said, “Truly this man was God’s Son!” (Matthew 27:54). The people rejected Jesus and ultimately sought to eliminate him, but in time many must have come to realise he was the most important person in the world, and again his prophecy about being the cornerstone was correct. We know from the Acts of the Apostles that many turned to Christ, such as, three thousand on the day of Pentecost (2:41), Saul’s conversion (Ch.9), some Athenians (17:34) and many Corinthians (18:8).

That was then, what about now? Many still reject Jesus and seek to eliminate him from their lives and the lives of others. Some may just not have heard about him yet, or may have heard about him in a damaging way by outdated doctrine and man-made rules, instead of the true message of God’s overwhelming and unconditional love. It’s why we must never judge people who struggle with faith; so often there are horror stories of pain and abuse hidden behind their lack of faith or commitment. It’s only by our love and patience, revealing God’s love and patience, in words and actions that we will bring them to the Lord.

And what about us? Do we reject Jesus? I don’t mean a complete turning away, but micro-rejections where we prioritise things over him? Are we taking this cornerstone seriously enough in our lives? Have we yet realised that Jesus is the most important person in the world? If not, what shift do we need to make in our minds to make that so? Jesus would have suffered and died for any one of us, never mind the whole world, and he still longs for us to be in a deep relationship with him. So, let’s take a good look at our priorities and see if they need a sort out this autumn.

Despite his suffering, Jesus, as our cornerstone, knew he would be triumphant. Despite our suffering of being displaced from our beautiful church, we will return and it will be triumphant, because with God, all things are possible!