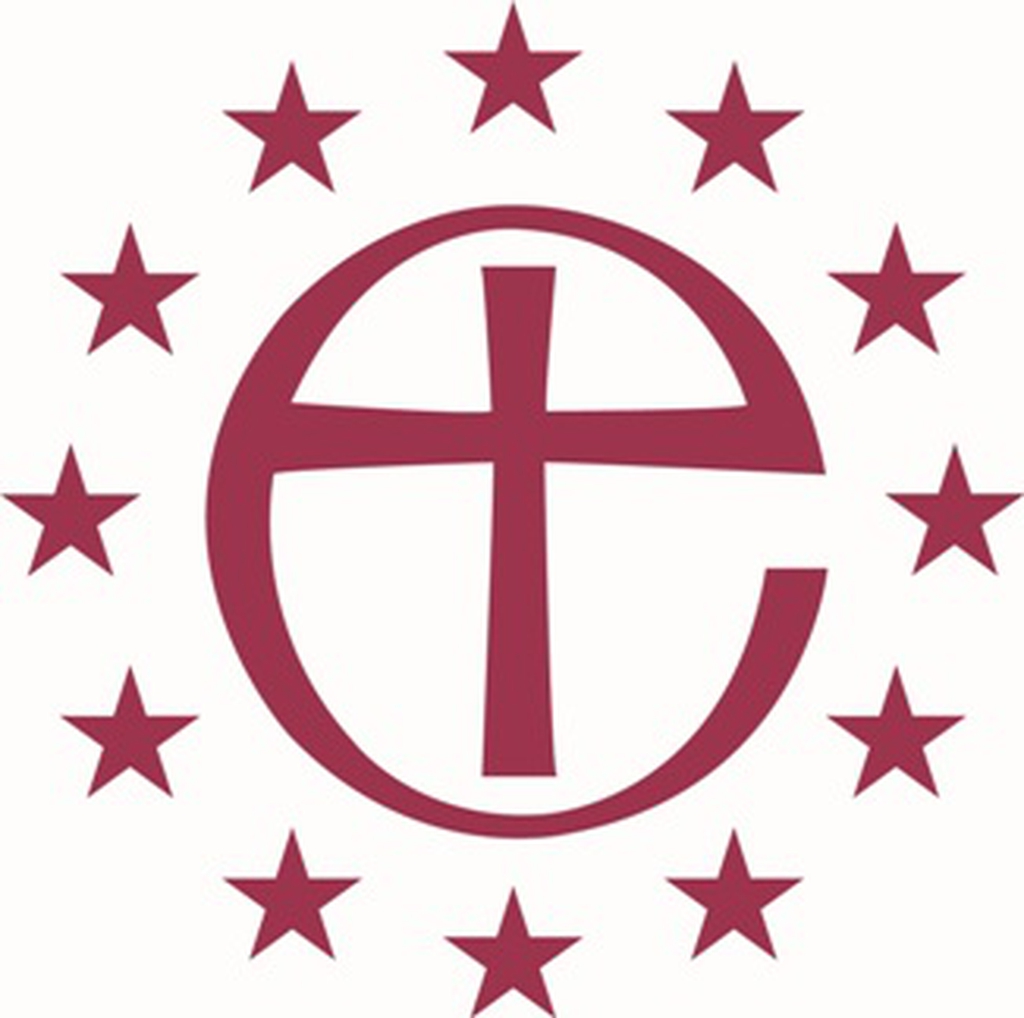 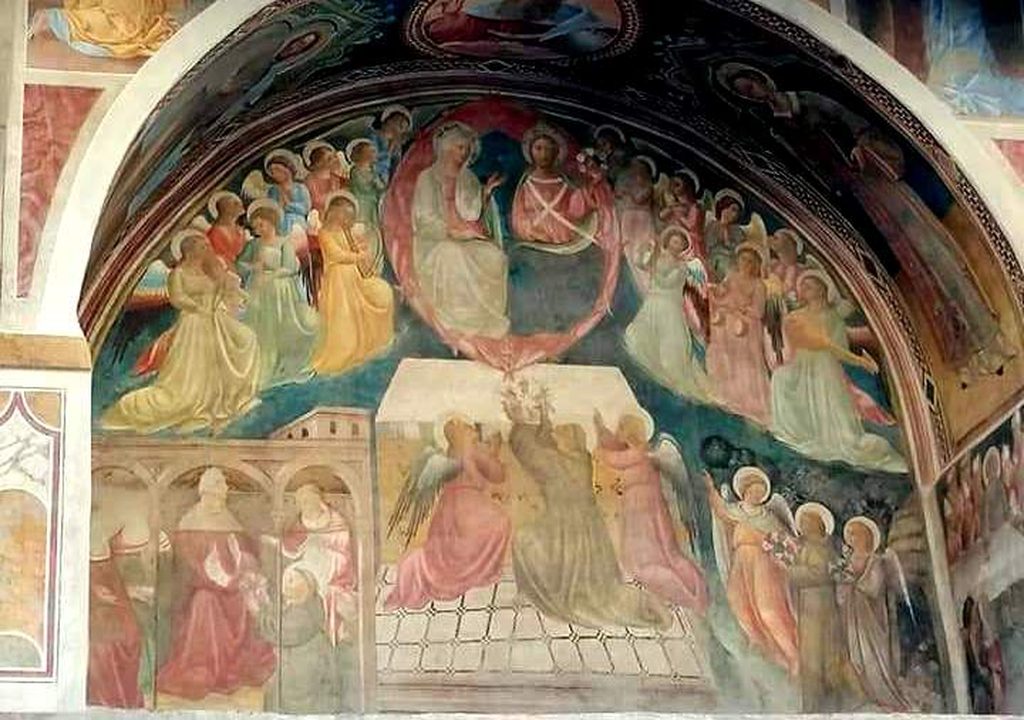 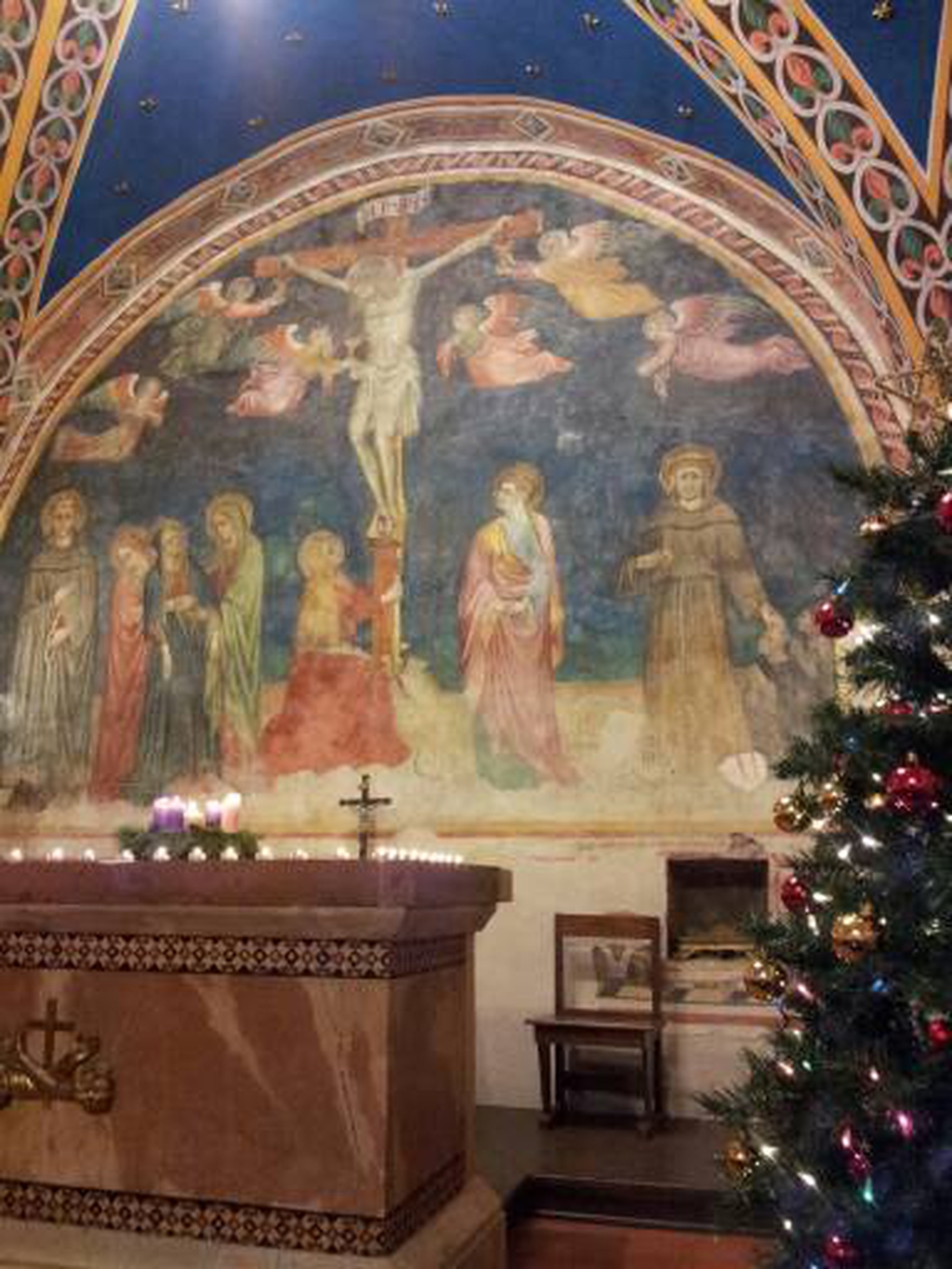 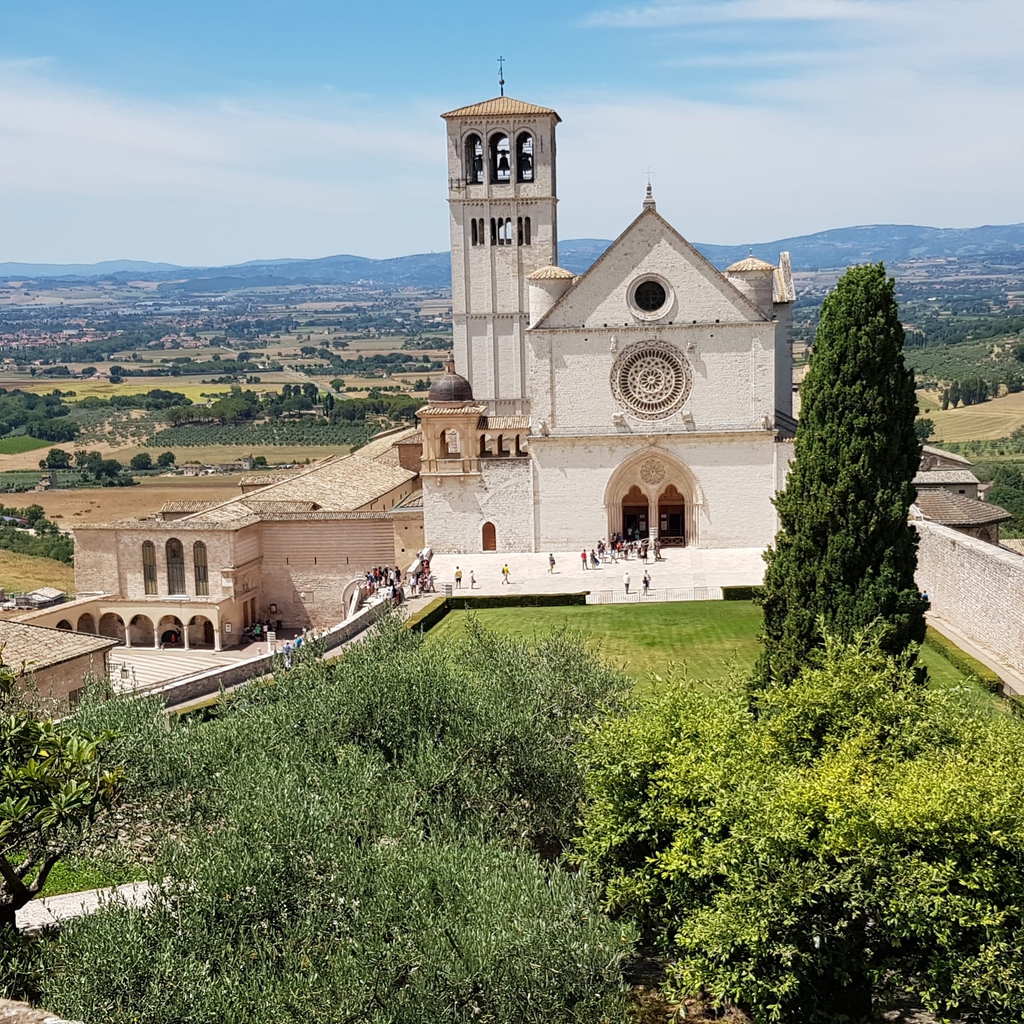 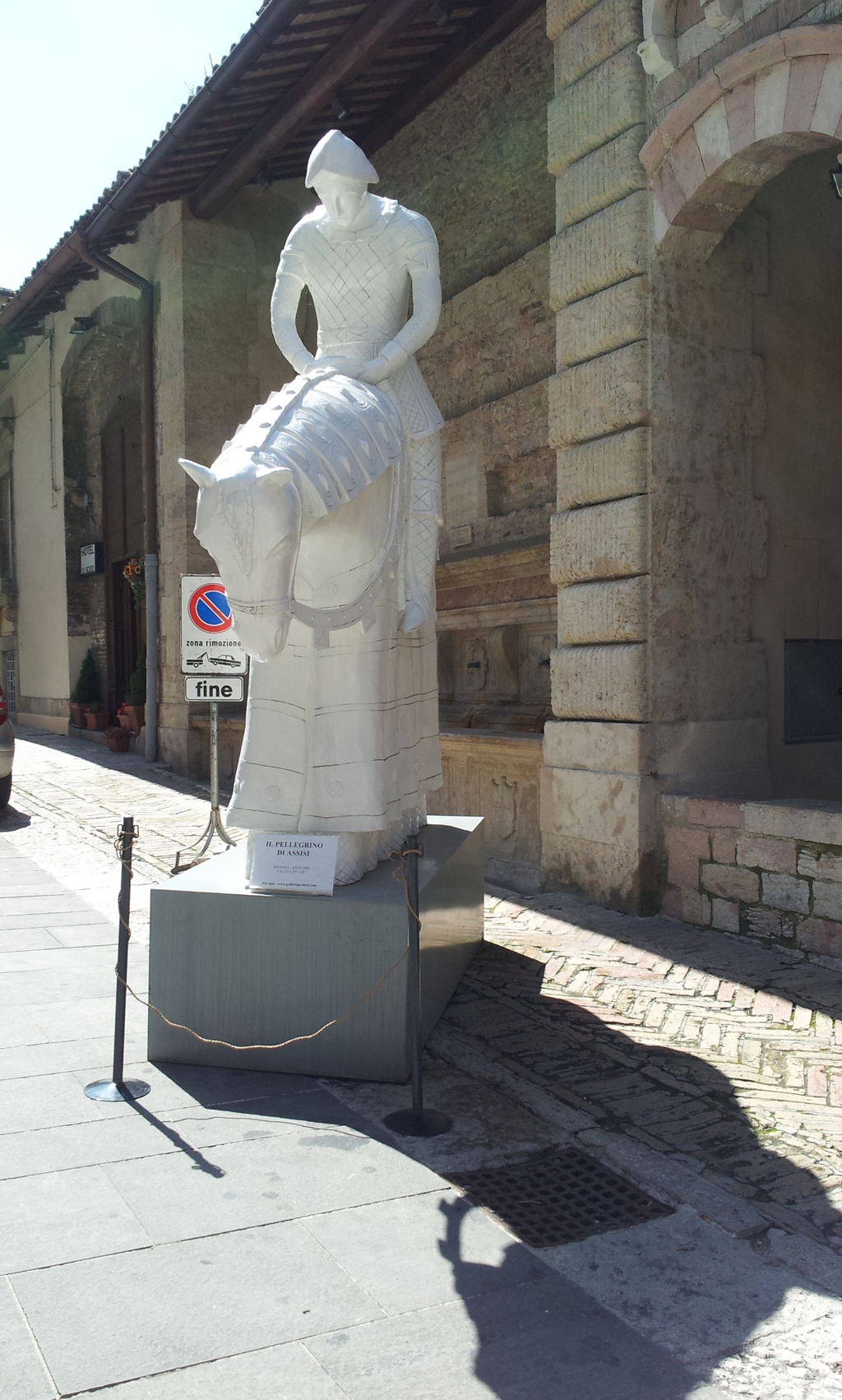 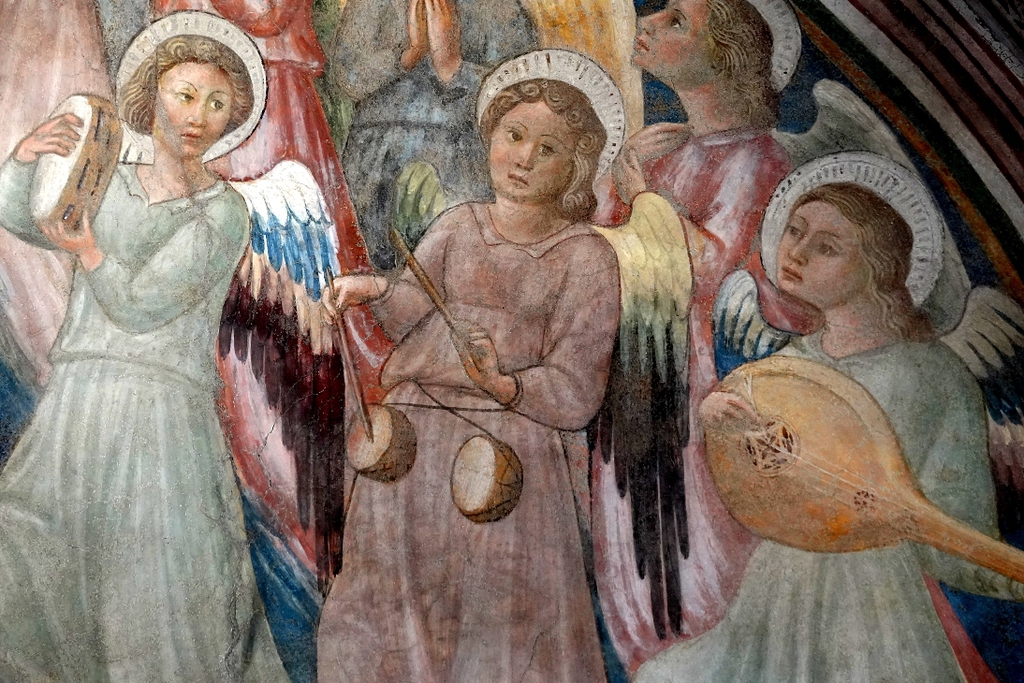 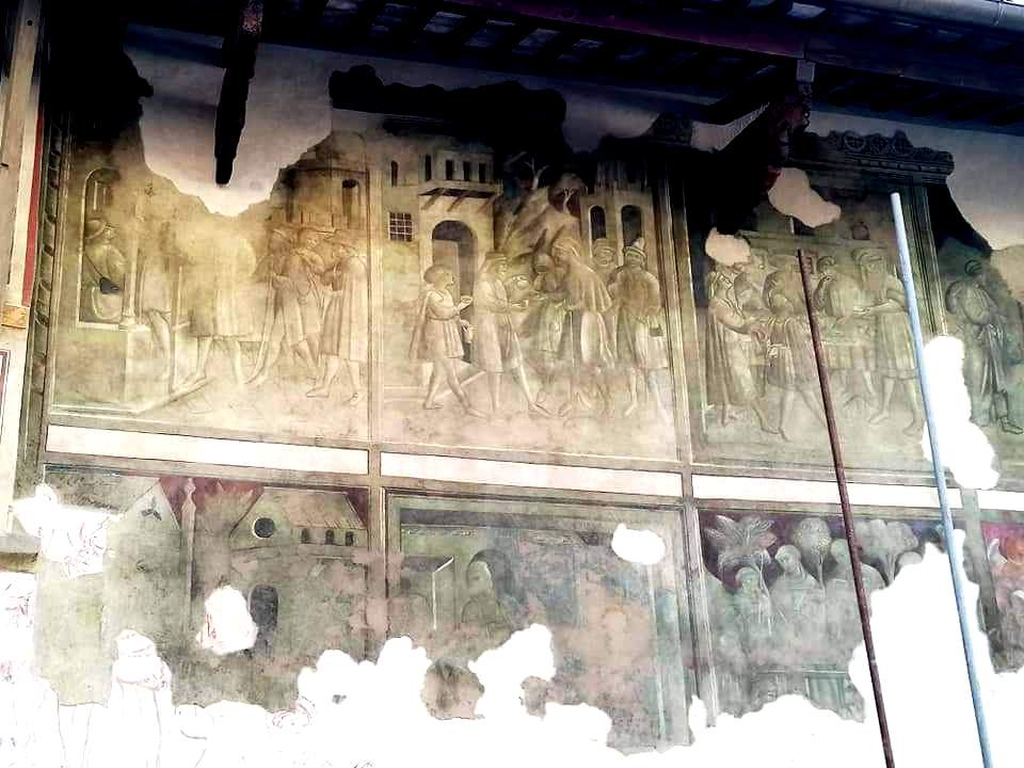 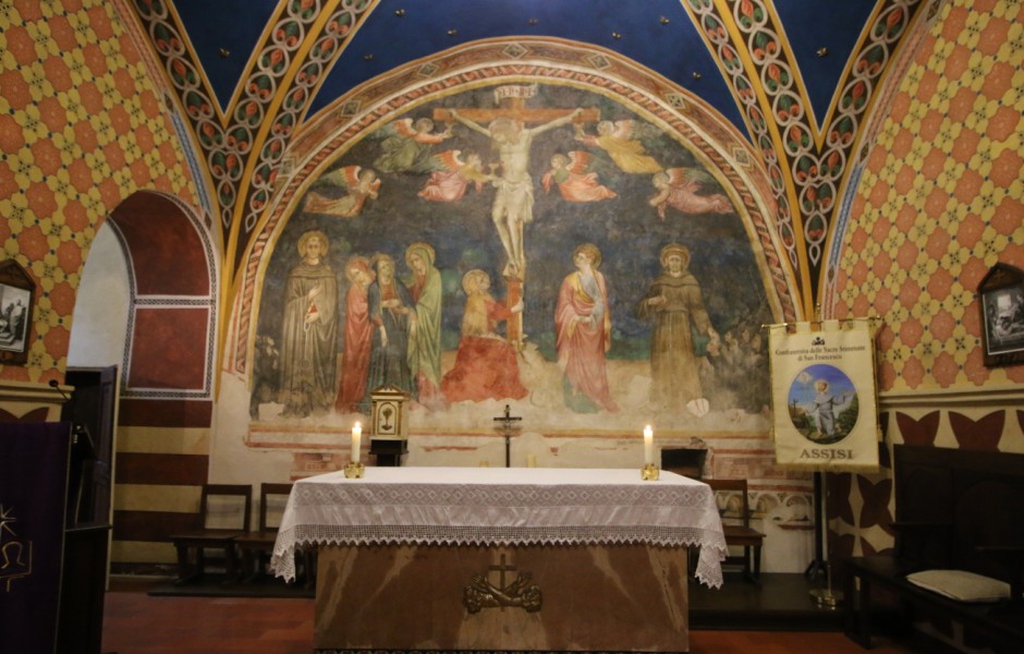 The church, dedicated to St Leonard, is used by kind permission of Bishop Domenico Sorrentino, the Roman Catholic Bishop of Assisi.

The Confraternita di San Francesco, which was first documented in 1330, own the church and adjoining buildings.  To complicate matters slightly, this oratory is also known by three other names:

¨ di San Leonardo, the name of the now-demolished church near Porta San Giacomo in which the confraternity originally met;

Today the buildings are owned by the confraternity, which is devoted to good works; there have been, and are, several confraternities in Assisi, as in many Italian cities.

As Francis became more popular after 1226, and perhaps came to be perceived as a better model for their charitable work and their devotion, the brethren gradually changed their 'allegiance'. The altar fresco was painted during this time of transition, and therefore shows both Leonard and Francis.  Both are shown with identical groups of penitent followers.  The members started to refer to the confraternity as the Confraternity of St Francis, or of the Stigmata. The chapel's nickname San Francescuccio (Little St Francis) can be explained from this development. The Confraternity itself is often referred to, even by members, as La Confraternità di San Francescuccio.

Behind the church there is a hall which leads onto a small garden which overlooks the Spoleto valley to the west.  The views from the garden are quite spectacular and the garden itself has the traditional olive tree and one large walnut tree.  It must be remembered that in Roman times, the Spoleto valley was a lake!  Whether this was a seasonal lake is unknown but it certainly was not a deep lake.

Gentile di Bernardo Fiumi gave the confraternity the land next to his family residence for the present oratory in 1428. The Fiumi continued their support into the 16th century.  Count Giacomo Fiumi was appointed to the confraternity by acclamation in 1490, and Count Alessandro Fiumi was its prior in 1510.  The current prior is Alviero di Cavallucci who lives in Ponte San Vittorino, just below the Basilica on the road which leads from Assisi to Bastia.  It is worthy of note that the tremendous personal assistance of Alviero has made it possible for the Anglican congregation to worship regularly in Assisi.  We cannot thank him enough.  His heart is huge and all those who meet him will understand the admiration we have for him and his confraternity.

A processional banner (1378) by the so-called Maestro del Gonfalone di San Leonardo that once belonged to the confraternity is now in the Cathedral Museum.

The entrance wall (which is a sidewall of the oratory—see picture on first page) contains a number of interesting but damaged frescoes:

Annunciation (ca. 1439):  This heavily repainted fresco to the right of the entrance has been attributed to Pietro di Giovanni Mazzaforte da Foligno.

Granting of the Portiuncula Indulgence (early 15th century):  This damaged fresco is in the lunette above the entrance.  In the main scene, Christ and the Virgin appear to the kneeling St Francis, who is surrounded by angels.  Saints Francis and Leonard stand to the sides, with God the Father above.

Seven Works of Mercy (early 15th century):  These monochrome frescoes are on the exterior wall to the right of the entrance.

The main fresco behind the altar depicts the crucifixion of Christ and is medieval in origin.  It is painted in the style of Giotto (Ambrogio Bondone, detto, 1267 – 1337). It has been authenticated as being painted by Giovanni di Corraduccio during the period from 1428 to 1436.  Giovanni di Corraduccio (c. 1370-80 to ca. 1440) was born in Foligno (20 kms south of  Assisi) and spent most of his working life in central Umbria.

The central part of the fresco bears a remarkable similarity to a wooden panel painted by Giotto, The Crucifixion (München, Alte Pinakothek).  The main figures in the fresco show Mary Magdalene at the foot of the cross with Mary, the mother of Jesus, at the left of the cross being supported by two women (one of which is probably Mary, mother of James) and to the right, St John the Evangelist.  To the far right of the picture is St Francis clearly showing his stigmata.  To the far left is St Leonard with shackles in his hands, indicating his link to prisoners.  At the top of the fresco are six angels, three of them holding chalices catching the blood of Christ from each of His three wounds.

A full restoration of the fabric and decorations of the church was undertaken in the second half of 2010.  During the work, the marble altar was moved forward to reveal a small 19th century stone altar.  In addition, removal of wooden panelling behind the altar revealed some unknown frescoes.

In the Hall behind the church there are many frescos which date back to the sixteenth century; each depicting an aspect of the history of Assisi.

There are seven St Leonards recognized by the church but it is the first to whom our church is dedicated.  There is little known about St Leonard of Noblac as most sources are unreliable.  He was thought to be a wealthy Frankish noble who was converted to Christianity in 496 by St Remigius, the Bishop of Reims.  At his conversion Leonard was granted the right to liberate prisoners at any time, if he thought them worthy.   He was offered a bishopric due to his noble background, but he refused and became a recluse at Micy, France.  He then lived at Limoges, France where he attracted a number of followers.  Through his prayers the queen of the Franks safely delivered a male child.  In recompense Leonard was given land by the royal court on which he founded Noblac Abbey, later called Saint-Leonard.  He is the patron of women in labour and prisoners of war (nowadays more widely interpreted as ‘prisoners’).  St Leonard’s feast day is 6 November.

The Anglican Congregation in Assisi

The Anglican church in Assisi is a part of the Anglican Diocese in Europe.  The Diocese stretches from Finland in the north, to the Canary Islands in the south, and from Vladivostok in the east to Portugal in the west.

The cathedral for the Diocese is Holy Trinity Cathedral in Gibraltar.  In addition, there are two Diocesan Pro-Cathedrals, St Paul’s in Valletta, Malta and Holy Trinity in Brussels, Belgium.

The Anglican church in Assisi comes under the administration of the Archdeaconry of Italy and Malta.

Up until the second half of 2005 the services in Assisi were held by visiting clergy or clergy who had retired to the area.  However, in October 2005, the Society of St Francis (SSF) agreed to provide a Priest-in-Charge as part of a strategy of maintaining a presence in Assisi.  As a result of the great involvement of the SSF it has been possible since 2005 to hold services on a weekly basis as well as other special occasions and feast days.

Owing to the increase in strength of the congregation it was agreed that the Anglican Congregation should become a congregation in its own right within the Diocese and separate from the congregation in Citta della Pieve which was the first Umbrian Anglican church in the 1980s.  In June 2009 the inaugural meeting was held in Assisi and a constitution agreed; it was subsequently approved by the Bishop.