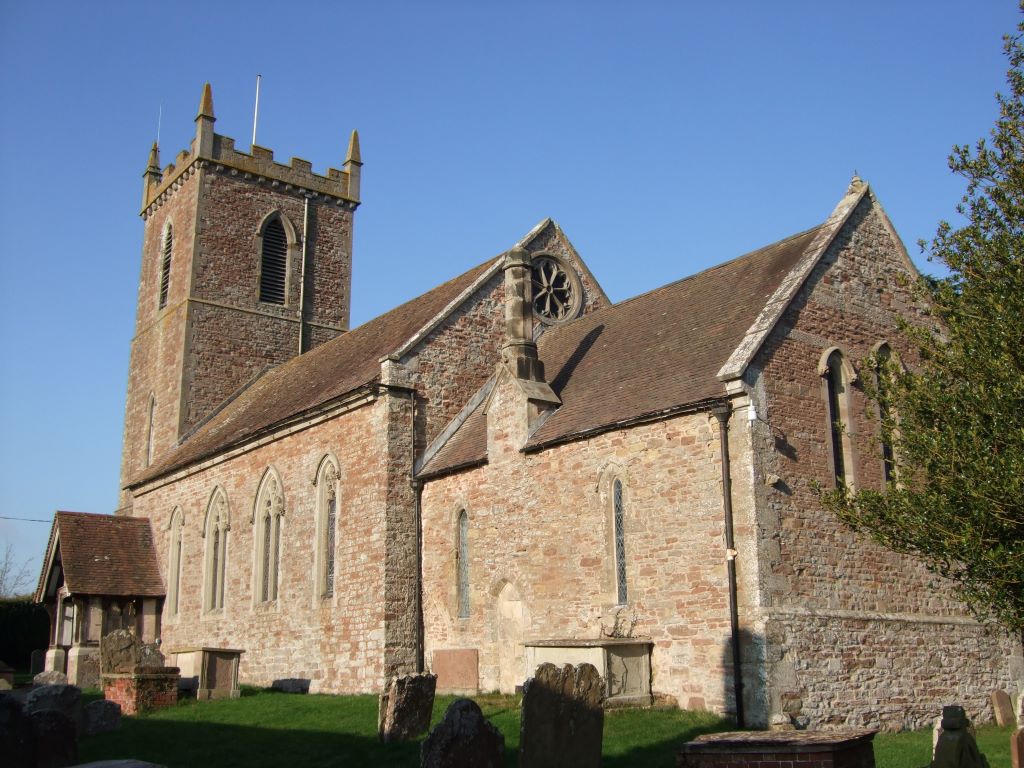 It is widely accepted historically that the Saxon Manor at Chetton was owned by Lady Godiva, wife of Leofric, Earl of Mercia. She was an ardent Christian and possibly established the ‘Preaching Cross’ which now stands in the churchyard close to the porch. It is not known whether there was ever a cross on top, but there was certainly a sundial at some time. These ‘preaching crosses’ were usually used as outdoor preaching places by itinerant preachers. It is however recorded in the Domesday Book that there was a Priest in Chetton. Could it be that Lady Godiva built a Saxon Church here?

Whatever the speculations, evidence shows that the Church is probably of late 13th or early 14th century. The general plan of the Church is typical of that period, having a West tower and a South door. The door shows Early English features of bold roll mounting on the arch and slight water hollows at the base. The hood moulding ends in a mask, which is typical of the 13th century.

The Chancel is medieval; featuring a timber arched roof with collar beams and purlins, resting on stone corbels. Directly below these are two female masks on the north side and two male masks on the south side. The central purlin rests on plain mouldings. The four lancet and arched windows are all medieval, although the south­west one is somewhat more rounded, but of the same date. The large East window is divided into lancets, which are modern, each one dedicated to a Saint; the southern one to St. Paul, the central to St John the Baptist and the northern to St. Peter. The north west window in the Chancel is of Ruth (in memory of Helen Caroline, daughter of the Rev’d I.S. Purton). The Chancel arch has the sunken quarter-round moulding which probably dates from the end of the Early English period. On the south side is the male head with a chain and strap around the top. On the north side is a female head with a pedimental head-dress.

The Ambrey is set deep in the wall of the Chancel. You can still see remains of medieval ironwork. The Altar and carved Reredos are 19th century. The Piscina, on the south wall of the Chancel, has a large square-headed recess and the jambs are chamfered, according to the Early English style, ending in small leaves.

The medieval Font stands on a stone platform. It has a 20th century cover, given in memory of the Rev’d R.B.Southwell.

In the churchyard there is reputed to be a mass grave, which denotes a plague at some time. The seven yew trees standing around the edge of the churchyard are meant to protect the Church from gales and storms from all angles. The two beautiful cedar trees must be at least 200 years old.

In 1976, at the instigation of the Rector, the Rev’d Preb. R. Dore, the south side of the nave roof was re-lathed and made weatherproof; the north side was completed in 1977. Money was raised to buy the necessary materials and the work was carried out by the churchwarden, Mr. Doug South, with the help of volunteers from the Parish. This Voluntary help resulted in a very considerable saving on the-conservative estimate of £10,000 quoted in the architect’s original quinquennial report.

Chetton Church is dedicated to St. Giles. Legend has it that St. Giles of Provence, as he was often called, lived and roamed in the forests of Southern France. He dressed in the robe of an abbot and had a pet hind, which kept him supplied with milk. One day a huntsman appeared and took aim at the hind. St. Giles placed his hand across its heart and the arrow pierced his hand. He refused to be cured of his injuries in order that he might more completely mortify his pride. He therefore became the guardian of cripples and beggars. He died in the year 712. The festival of St. Giles is on September 1<sup>st</sup>.