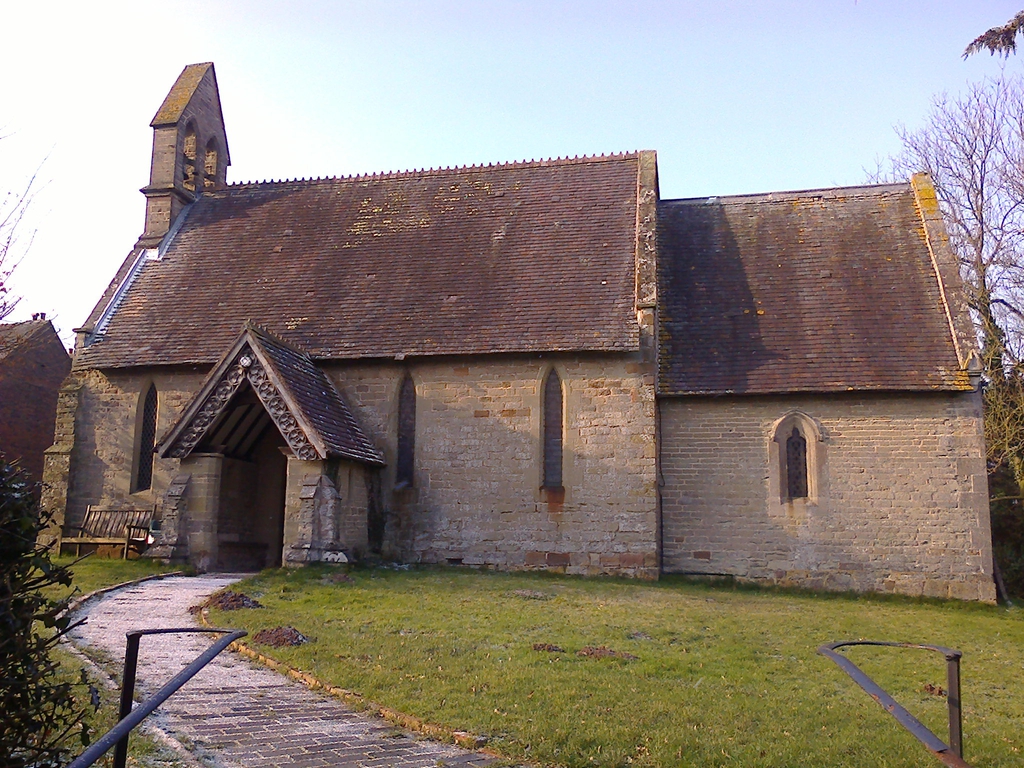 Middleton Scriven lies amongst the compexity of lanes south of Bridgnorth, with the church of St John the Baptist at its centre. An original mediaeval church was rebuilt in 1845-6, almost completely replacing it with a Victorian building. As is the case with such structures, the style is still Gothic, with an 'Early English' nave and 'Decorated' chancel. There is something rather fine about using two periods in a single rebuild!

The stained glass windows are lovely for they tell stories of past inhabitants of the parish. In the west wall of the nave is a window depicting 'Suffer the little children to come unto me', commemorating June Margaret Beasley, who died at the age of two in 1930. Opposte is a pair of windows showing the Good Shepherd and Dorcas, commemorating Revd Simmonds Attlee, Rector, who died in office in 1918 at the age of 82, and his wife (or daughter?) Helen Attlee, who died in 1898 on the Mount of Olives - what a loving tribute to a couple who clearly gave their lives to their parish. The west window is dedicated to the patron saint, John the Baptist; and the east window in the chancel is per crucem ad coelum: 'Through the cross to the heavens'.

The church has been considerably re-ordered over the last twelve months. The (very uncomfortable) pews have been removed, a new floor put in, a kitchenette and store constructed at the west end, and the font relocated to where the work on the floor showed it to have originally been. The nave now provides either worship space for the main festivals, or community space for events that have so far included Harvest Supper, coffee mornings, a quiz night, several celebratory lunches  and a very welcome tea reception at the end of the 'Ride and Stride' benefice pilgrimage. The chancel remains unaltered, an ever-present sacred space alongside community fellowship.

As well as the main festivals, the church has a monthly service on the first Sunday at 10:30 am, alternating between Holy Communion and Morning Prayer. Both services use the Common Worship liturgy, and hymns are sung.