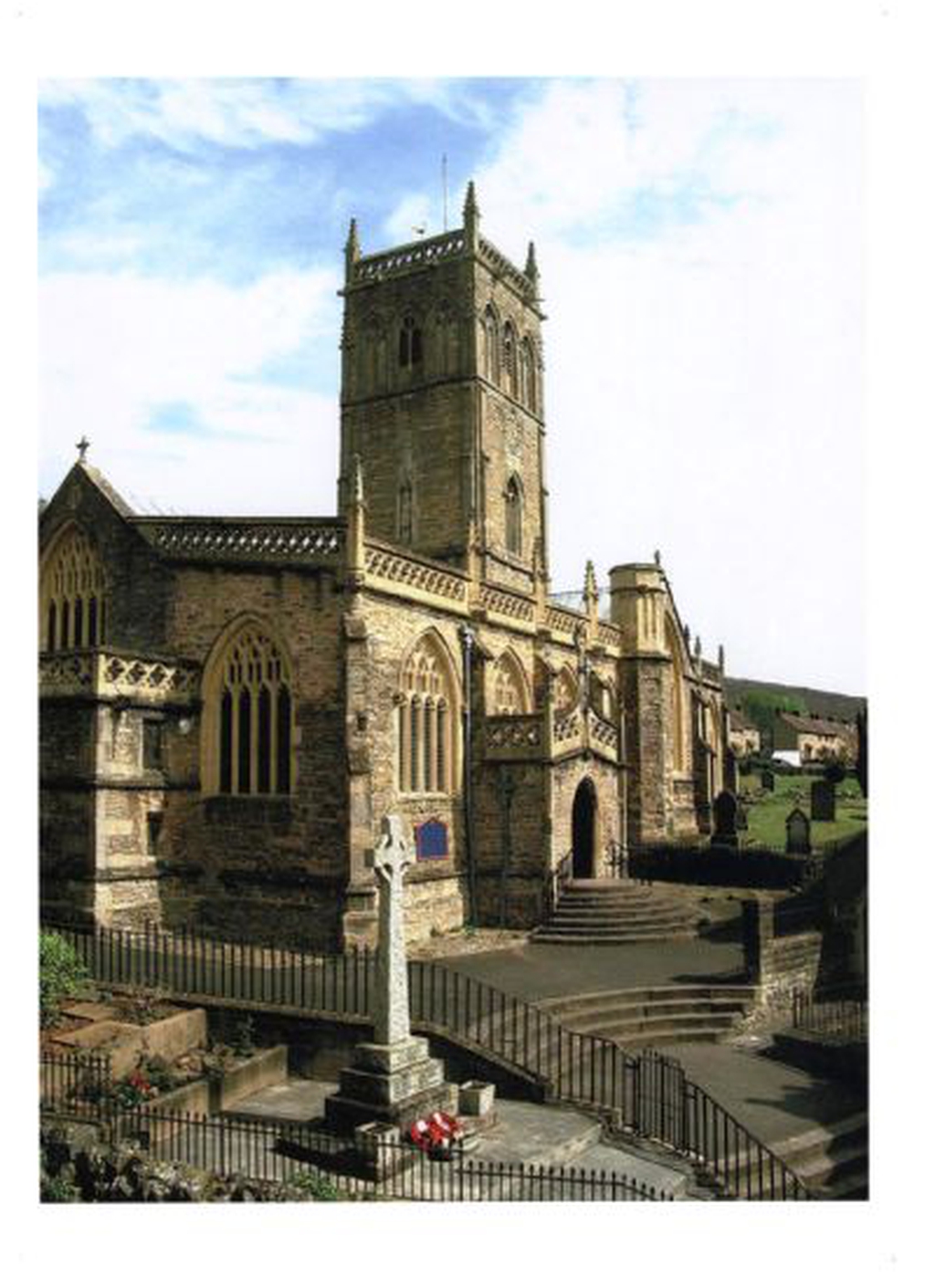 Work on the current building began in the early 1400s, and grew from an earlier building dating back to about 1230. (the earliest recorded Rector's name dates from 1264). It is strikingly placed on its small hill, dominating the town square, which itself still keeps its medieval shape. The entrance up the church steps is narrow, so that the full beauty of the building is only gradually revealed as you approach. The church is built of limestone and decorated with Doulting stone, while the steps are an interesting example of Dolomitic Conglomerate (pudding stone). The pierced parapets are an attractive feature.

The crossing tower is over 100 feet high, and holds six bells. The statue on the East side is that of St John the Baptist. On the West side is a king - perhaps Henry VII - which would place it after 1485. You will see plenty of evidence of recent cleaning and restoration, and these statues are good examples of that work.

Enter through the South porch, with its stone panelled roof and sadly disfigured statuette of the Madonna. The first impression on entering the church is of light and space. The nave is tall, the windows large, and the glass clear or tinted, rather than stained. The church was fortunate that its Victorian restoration came late, in the 1880s, and was at the able hands of the Diocesan architect, J. D. Sedding, who may have designed the glazing patterns himself. He also organised the appeal for funds, so we have much to thank him for.

The elaborately plastered nave ceiling dates from 1636, and a local man was paid ten guineas (£10.50) for the work. It presumably replaced a decayed wooden roof. The chancel ceiling was

similarly plastered, but was replaced as part of the Sedding restoration. The North aisle ceiling retains some mediaeval painted panels, and amongst the carved bosses is the head of a Green Man, with leaves sprouting around his face. At the south east end of this ceiling is a very fine plaque of the Madonna with lilies.

At the head of the North aisle stands a case containing the altar frontal embroidered by Abigail Prowse. She was the daughter of Dr George Hooper (Bishop of Bath and Wells 1704 - 1727) and widow of John Prowse (who died of smallpox on 1710). The frontal depicts the altar furnishings of that time and took her ten years to embroider.

The pews are Victorian, and the end designs include an alarmingly lifelike head of St John the Baptist on a platter.

The Lady Chapel and Crossing

At the end of the South-East Chapel (the Lady Chapel) is a remarkable monument of 1668 to Anne Prowse. The figure has recently been restored and is now close to its original colours, but the rash of cherubs and angels (or are they mermaids?) is quite overpowering. The angel on top has lost his trumpet. The window above was given in memory of Ann Hippisley in 1897. The three panels depict the Annunciation, the Adoration of the Magi and in the centre the Presentation in the Temple.

The pillar in the chapel is pierced by a squint. In the 13th century building this would have given a direct view of the altar from outside for those, such as lepers, who were not allowed inside the church.

The Lady Chapel is used regularly for weekday services and acts as a focus for the Mothers' Union.

In the crossing is a fine fan-vault, with a circular opening through which the bells can be passed for repair. The ringing chamber is immediately above. The eighteenth-century ironwork cross suspended there used to support a brass chandelier - sadly, this was stolen some years ago. Notice the repaired chip on the chancel step - apparently the result of some careless handling of a bell after recasting!

The Sanctuary and Vestry

The parclose screen (on either side of the sanctuary) is another part of the Sedding restoration. It shows some remarkable lettering (look for the word "Acknowledge" on the North side just inside the altar rail) and many small animals. The Altar rail itself repeats the names recorded on the War Memorial outside.

The big East window was dedicated at the time of Queen Victoria's Jubilee in 1887, and also celebrated the completion of the restoration.

In the North-East chapel, now the vestry, are several more monuments to the Prowse family, and a more humble one to one of their servents. The long epitaph to Thomas Prowse claims, perhaps a little too late, that "no flattery shall stain his monument".

Just by the curtain into the nave is a fine monumental brass of Roger and Joanna Harper. The inscription describes Roger as a "merchant of this town", so he may well have lived in a house similar to King John's Hunting Lodge, which is actually a merchant's house of that period.

The West End and Spearing Bequest

The font is a fine fifteenth-centry stone example. Apparently it was plastered over, perhaps to save it from damage during the Commonwealth, and only rediscovered when someone idly picked off a bit of plaster during the 19th century.

Two doors lead to tiny rooms beside the West Porch. These may have been possibly Priests' rooms.

Over the South door is a bread box, and an inscription recording the Spearing Bequest of 1690. This bread is still distributed, three centuries on. The Second Poor were those who, while poor, were not quite poor enough to be "on the Parish". Spearing's memorial is in the Lady Chapel.

Finally, on either side of the South door are small stone carvings. On the right is the Lamb and Flag symbol of St. John the Baptist. On the left, more difficult to make out, (she has lost her head) is the Pelican, with her chicks feeding on the breast - an image of the Body of Christ.

The beautiful glass doors are recent, designed and engraved by Tracey Sheppard. They concern our Patron Saint, St John the Baptist; he referred to Jesus as the Lamb of God, and the Holy Spirit descended upon Jesus as he was baptised by John in the river Jordan.

A virtual tour of Axbridge Church is available on Google Maps.