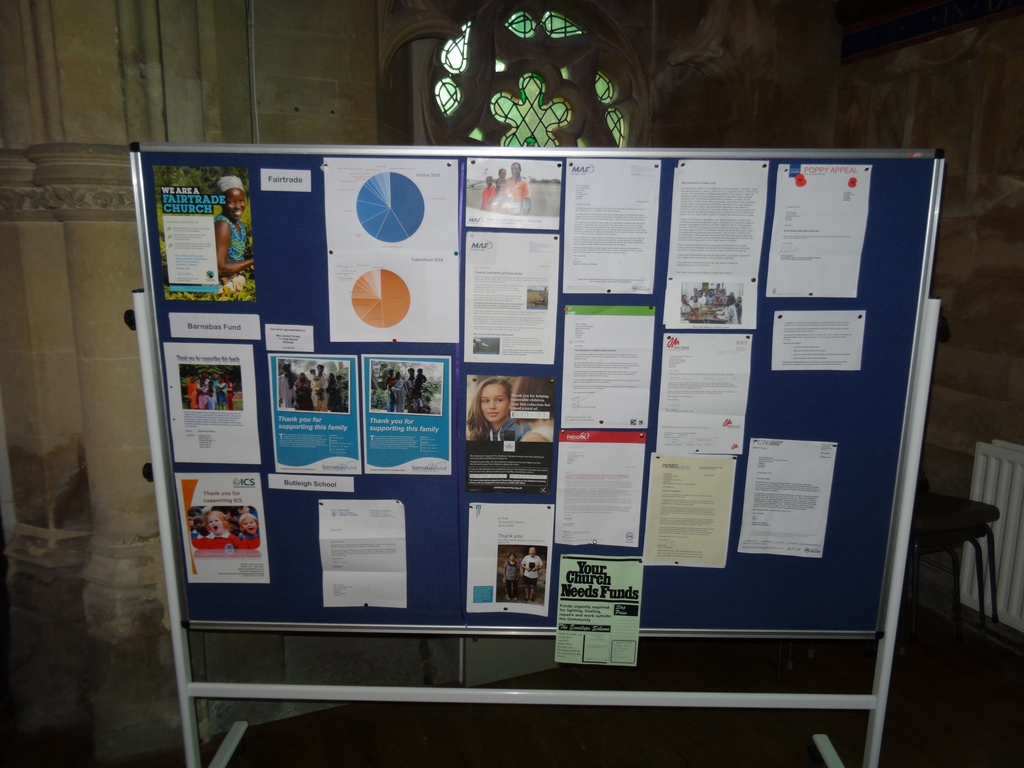 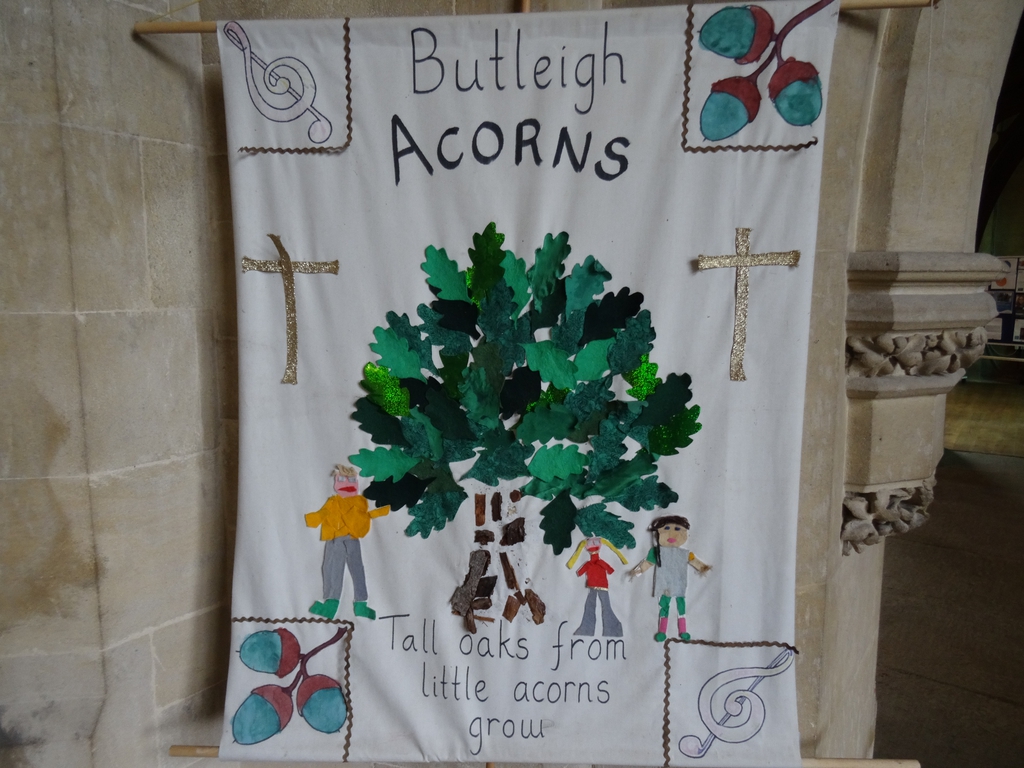 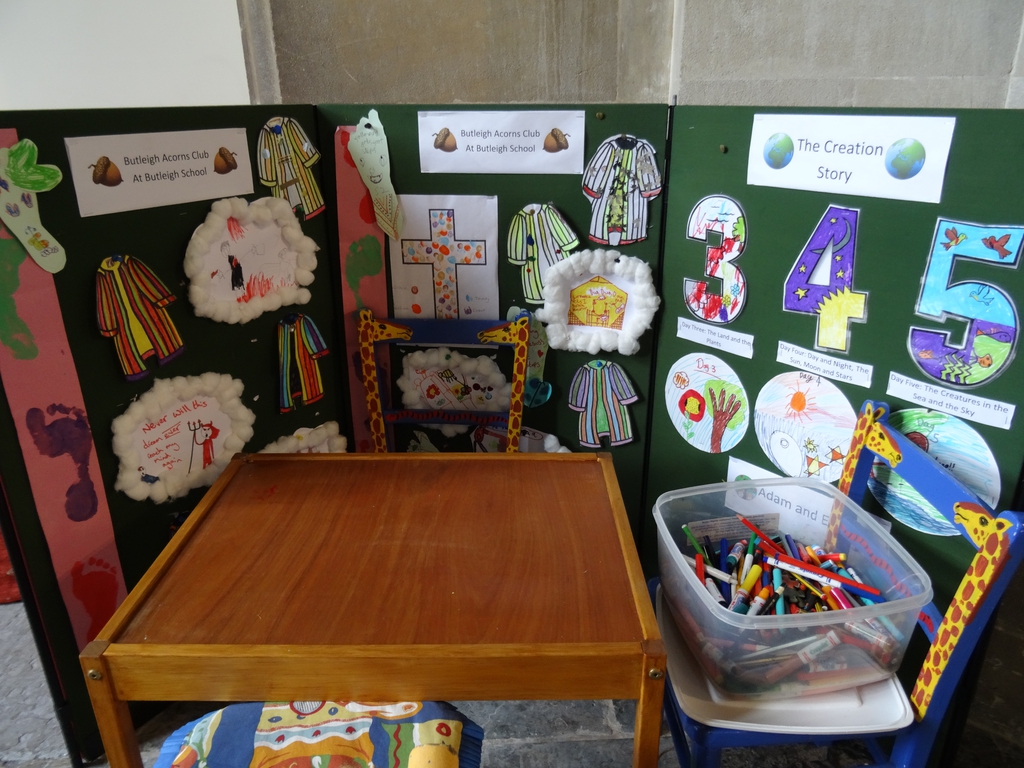 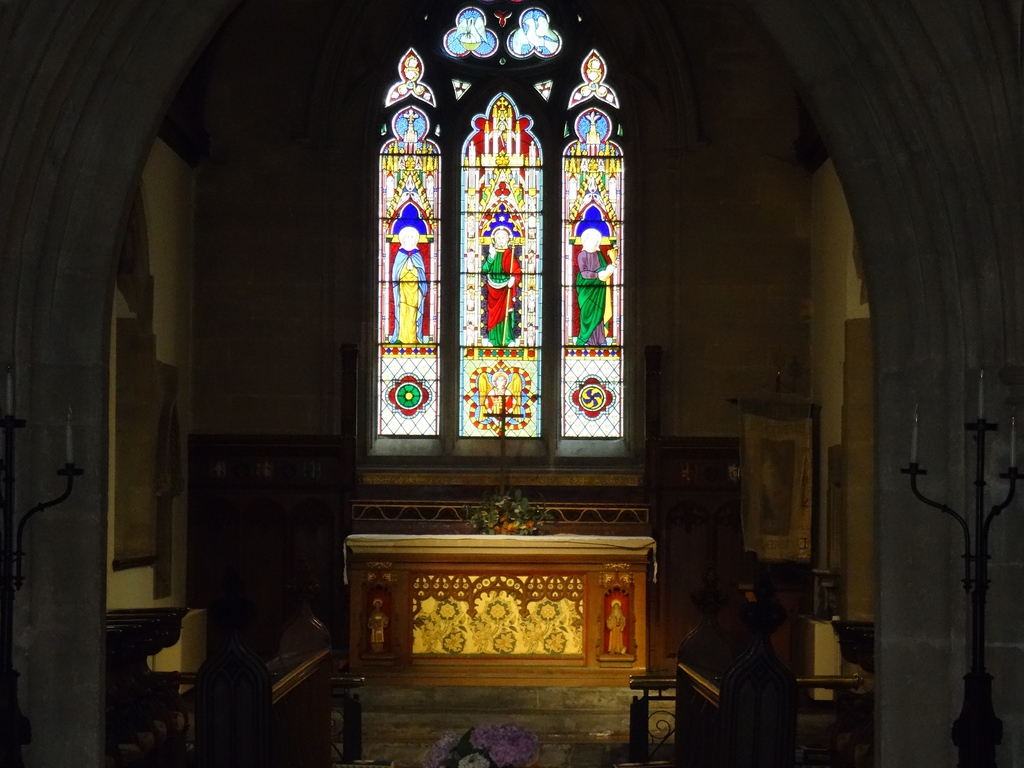 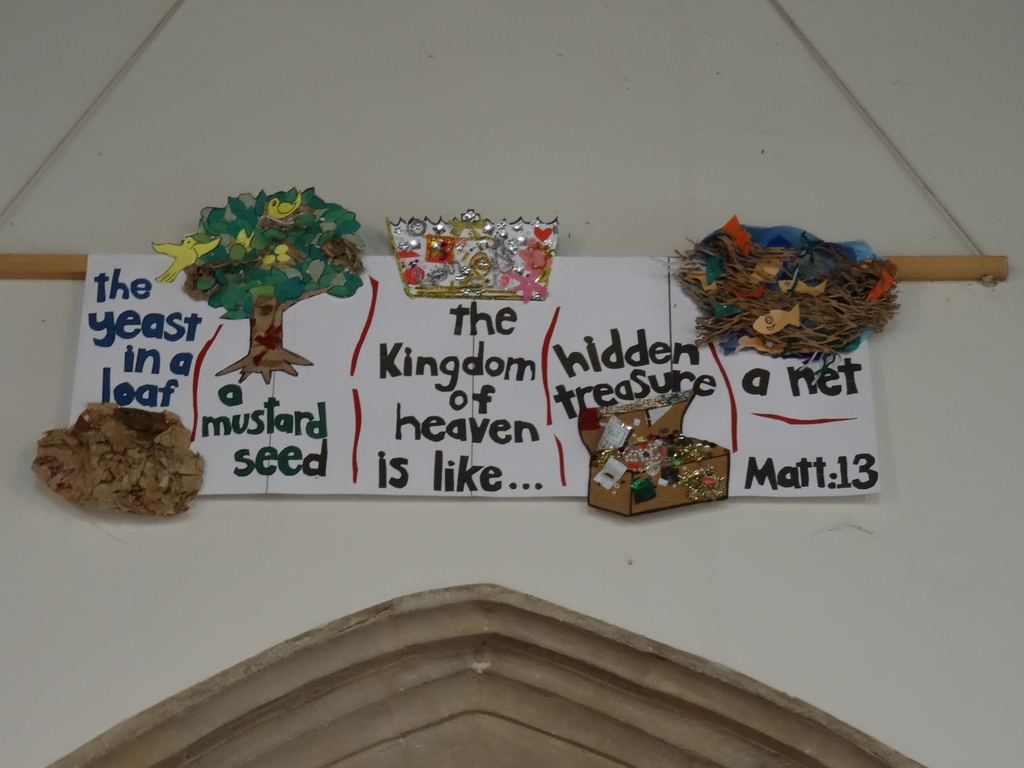 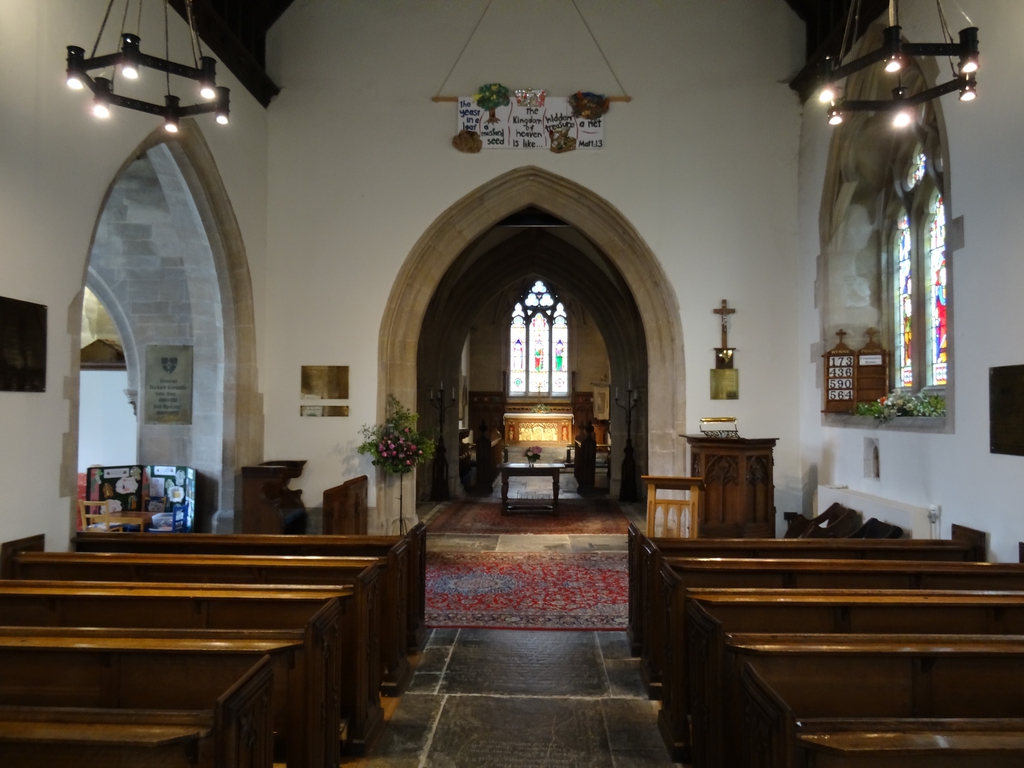 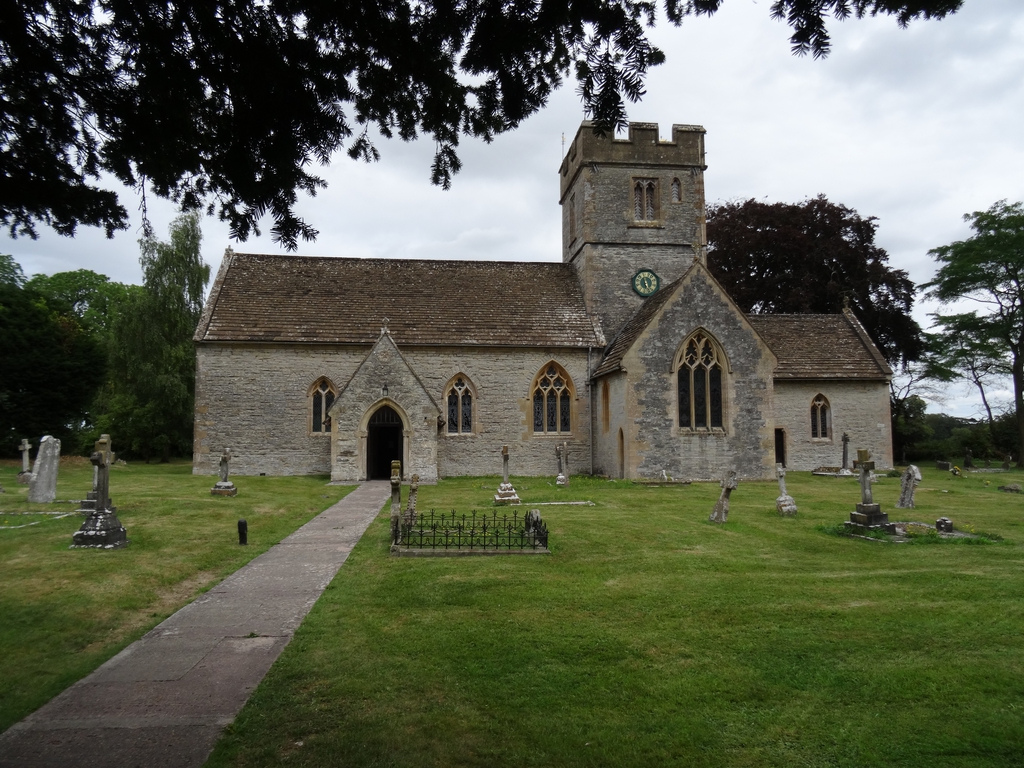 Our vision at St Leonard's is to be a church which shows God's love at work in our rural community.

Butleigh Church is part of a joint benefice with Baltonsborough, West Pennard, West Bradley and Lottisham. It is the Chritian centre for a busy and thriving community of seven hundred people. The Christian worship within the fabric of the church continues and changes as it has through the centuries, as we seek to be relvant to today's society with the good news of the gospel of Jesus Christ.

A Jacobean Communion table which stands in the North aisle is often put underneath the tower so that the Communion is shared in closer proximity by the Priest and the congregation.The configuration and appearance of the present stone building of St. Leonard's dates from the mid-nineteenth century, but there has been a church on this site since Saxon times. The oldest parts of the church are the jambs to the outer door. These are thought to be Saxon and may have been part of the early chancel arch then removed and re-used. In Norman times Butleigh was recorded in the Doomsday Book as Boduchelei, belonging to the Abbey of Glastonbury to which the church at Butleigh was attached for hundreds of years.

During the fourteenth century the church was largely rebuilt, not in the usual medieval cruciform plan, but as a long narrow structure with an aisle-less nave, chancel and a central tower as wall and pillar masonry and a gargoyle on the South West corner of the outer testifies. The windows to the nave and chancel are elegant late fourteenth century with internal decorated cusping that is rare for Somerset. The fine South porch is of the decorated style of the late fourteenth century. The old gable cross still remains with an elegant carved boss in the gable.

Outside, on the West side of the South porch, there are two scratch dials, one with a noonline at 1 metre 20 centimetres from the ground, and another 1 metre 72 centimetres. These stones are thought to be a Saxon sun-dial re-used like the jambs in the building of the porch.

At the time of the first Tudor King there was an insertion of the fine six light West window which is in the English perpendicular style. Now, only a little of the original painted glass remains to give us a glimpse of how the church was elaborately decorated during the Middle Ages. In the upper portion there is the Glastonbury Arms and the lower parts of four figures; St. James with a pilgrim's staff, St. Thomas with a lance, St. Bartholomew with a large blue knife, and possible St. Paul with a short similar shaped sword. This tracery light glass is unlike any in the country.

In 1608 the church was given the addition of the North transept where the organ now stands. It was built by the Simcox or Symcocke family who were the then Lords of the Manor, probably as a burial place for the family. A little later a memorial was erected in this chapel to Thomas Simcox. It was later moved to the chancel then partially destroyed.

In the nineteenth century the monument with the remaining figures of Thomas, his wife and son Christopher were replaced on the instruction of George Neville-Grenville.

In 1750 there was a need to renovate the roof. The lead was replaced by Ham Hill tiles and the timber rebuilt in elm because of the scarcity of oak at the time. In 1758 a one handed clock was purchased from Glastonbury and put into the tower.

Extensive alterations and renovations were undertaken in the mid-nineteenth century largely as a result of the Churchmanship and restoring zeal of the Victorian Lords of the Manor.

In 1829 Thomas Willement, the heraldic artist to George IV, was commissioned for the East window. It is an early example of his work. The colouring of the stained glass is crude, but the choice of subject matter and the general layout of the window show that he was trying to follow in the way of medieval tradition. The window near the porch is by Pugin but it is not a fine example; its date is not precise but it was not present in 1833.

In 1851, Mrs. Alexander Hood of Butleigh Wootton was permitted to make an addition to be called the South transept. It contains an elaborate monument to the sea-faring Hood brothers with a poem in blank verse by Southey.

The major changes to the church, which give it the appearance it has today, were carried out lovingly by George Neville-Grenville, formally Dean of Windsor, and his family. In 1850 the North transept was added, which today is the vestry. The beautiful hammerbeam roof was designed by John Buckler as were the chancel stalls complete with misericords. The chancel roof was restored altering the exterior line of the roof. Inside it is a good coved and boarded ceiling with its Eastern bay richly painted. In 1859 the North aisle was built. The good quality furnishings are all of this period. Other general restoration to the windows and masonry was carried out at this time.

In recent times, there have been periods of repair. The present organ was installed in 1965. Three years later new lighting was installed, the font moved and pews rearranged to give a more spacious appearance. The six Bells were rehung on ball bearings in 1969. The clock was restarted in 1976, after not working for seven years. In 1983, work was carried out on the church path and an entirely new clock face was made, although the single hand is original. The harvest coloured carpet was laid in 1987 bringing added warmth to the church.