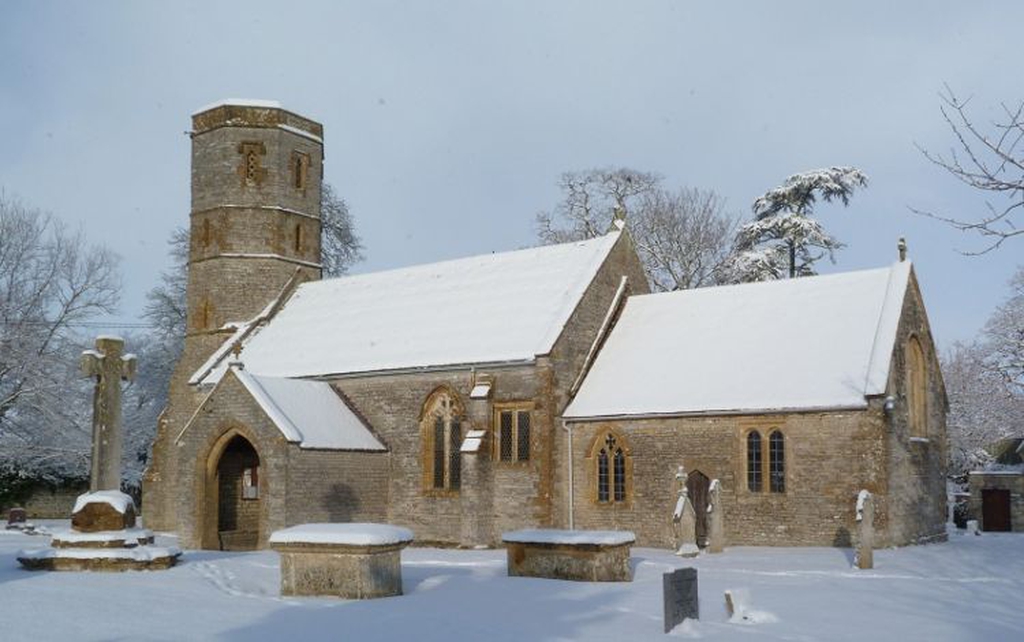 For many centuries the people of this village have cherished this little church and welcomed visitors.   We hope you will enjoy your visit and find the following information interesting.

This church dates back to the 13th or 14th Century and has been in use for some 800 years.   But we know there was a building here at the time of the Doomsday Book, in the year 1087, and it was already linked to Glastonbury Abbey, whose monks were Lords of the Manor down to the 16th Century Reformation.

The present altar is only Victorian; but the pavement on which it stands is mediaeval and the altar rails date from the Restoration of King Charles 11 in the late 17th century.   Our east window probably dates from the 1490’s and retains a little of its original glass, including a piece in the tracery painted with ears of barley.   This is thought to be a pun on the name of Abbot Richard Beere, who died in 1525, and probably gave the window on behalf of his Abbey of Glastonbury, who were patrons of the living until the reformation.

The ‘List of Rectors & Patrons’ in the church makes interesting reading at the time of the reformation and commonwealth.   When Rad Clerk was appointed rector in 1514 the patron was still Glastonbury Abbey but by the time William Osborne was appointed rector in 1543 Henry VIII was patron reflecting his break with Rome in 1534 and the subsequent dissolution of the monasteries.   When John Swaledale became rector in 1554 John Horner de Cloford was patron.   He was related to the John (Little Jack) Horner who lived at Mells and was assistant to Thomas Cromwell the chief architect of the dissolution of the monasteries so it would seem that John Horner de Cloford would have been well placed to obtain the estate of Podimore when it was confiscated from Glastonbury Abbey.

Recent renovations to the east end of the church when the plaster was removed revealed the remains of niches on either side of the window which would have contained statues of saints (probably St Peter and the Blessed Virgin Mary).   These were probably removed and the niches filled and plastered over following an injunction of July 1559 under Elizabeth I which ordered the abolition of images.

The stairs in the north wall would have given access to a rood screen depicting the crucifixion which would have been removed at about the same date.

In 1641 William Kemp was appointed rector.   There is then an interesting note ‘J Wyat, a schismatic, invaded the Benefice during the Commonwealth (1649 – 1660) after the deprivation of Prebendary Kemp but was ejected after the restoration’.

The figure of Christ over the chancel arch was carved by a local G. P. Dr N Burrell in the early 1990s.

The roof is of simple construction, but notice some mediaeval bosses.  Can you see the double-headed eagle and our green man?

Now look at the back of the Church, briefly glancing at the ancient pews and pulpit, dating perhaps from the 15th century and providing the latest comfort and convenience for the preacher and congregation of those days, though the old pews now strike us as rather on the narrow side.   Under the tower arch, we see the font which dates from the 13th or 14th century and possibly stands on the lower part of a Roman column.

The tower is octagonal, which seems to be a feature of churches in this part of Somerset.   From the inside we can see with what cunning arches the builder has fitted eight sides to a square base.   It contains a single bell dated 1633 said to have been cast by Robert Austen of Sherborne with the appropriate inscription; -

Repent I Say Be Not To Late.  Thyselfe At Altimes Ready Make.

To learn more about the church watch our video on YouTube  http://www.youtube.com/watch?v=sFhCd__P8xk&feature=youtu.be

St. Peter’s Church in Podimore has received initial support, a first-round pass for a project totalling £100,000. As part of the first-round pass, the church has been awarded a development grant of £10,000 to help work up the plans further in order to come back and apply for the full amount from the Heritage Lottery Fund (HLF) for repairs to the stonework and roof of the tower.

The condition of the tower is very poor and the project will carry out essential conservation work.   It is built of blue lias and hamstone which has seriously deteriorated over the centuries and is now considered by English Heritage to be ‘at risk’.

St. Peter’s is a quintessential Somerset church with an unusual hexagonal tower.   Much of the fabric is medieval altered in the 15th and 16th centuries, but spared over restoration in the 19th century.   Podimore is a tiny village where the church has been the focus for important events for many centuries and this work and the support of the Heritage Lottery Fund and the local community will ensure that it continues to be so for many years to come.

Using money raised through the National Lottery, the Heritage Lottery Fund (HLF) aims to make a lasting difference for heritage, people and communities across the UK and help build a resilient heritage economy.   From museums, parks and historic places to archaeology, natural environment and cultural traditions, they invest in every part of our diverse heritage.   HLF has supported almost 35,000 projects with more than £5.6bn across the UK.  for more information visit www.hlf.org.uk