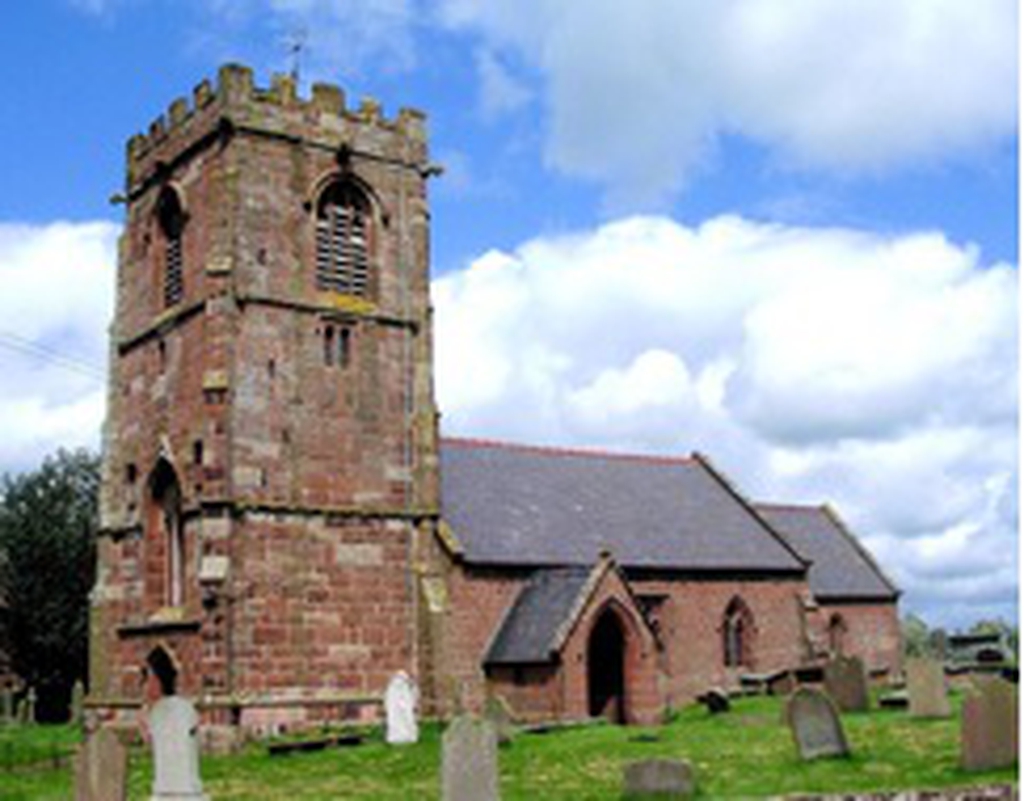 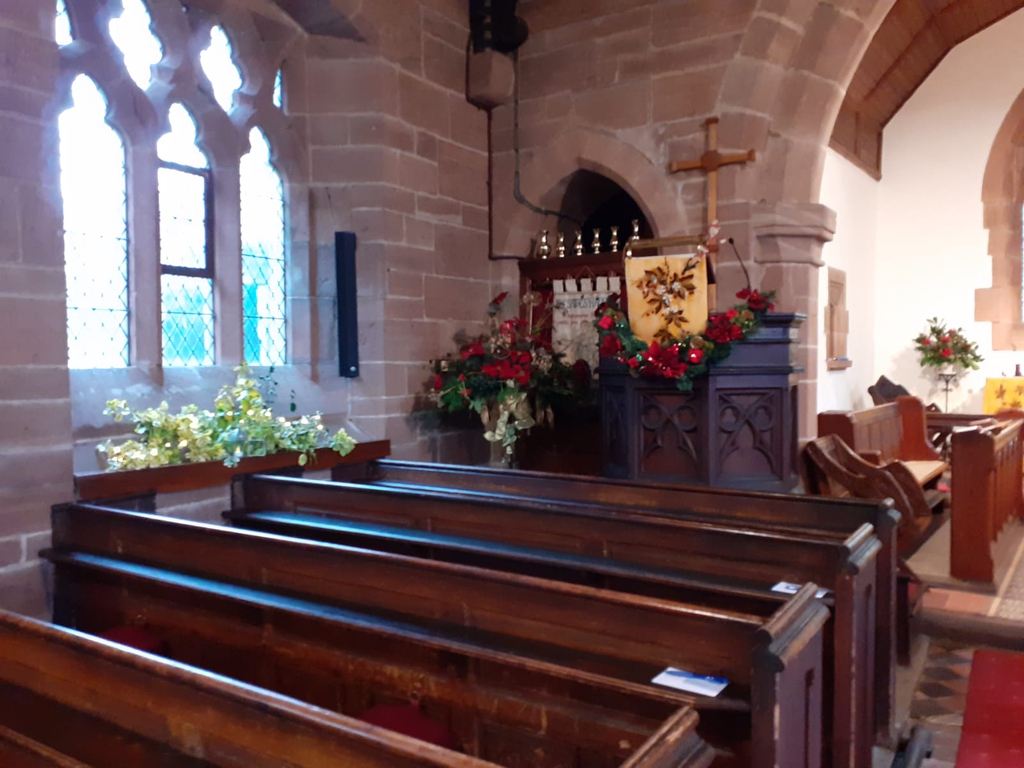 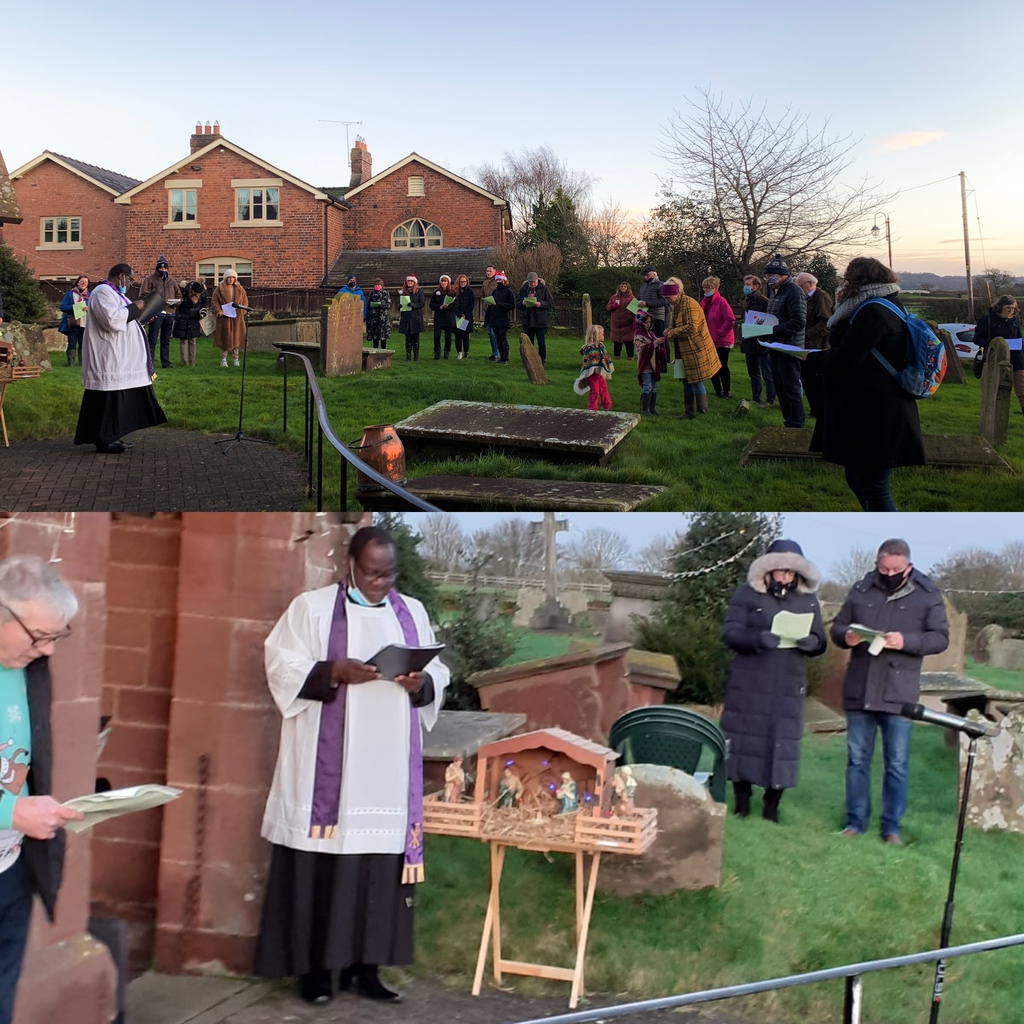 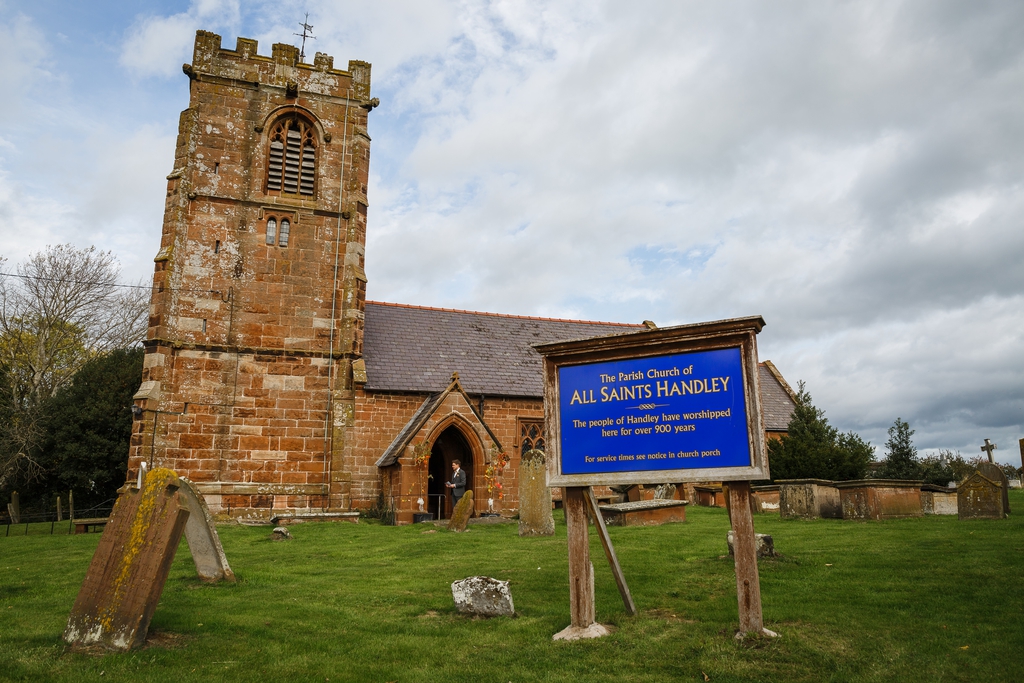 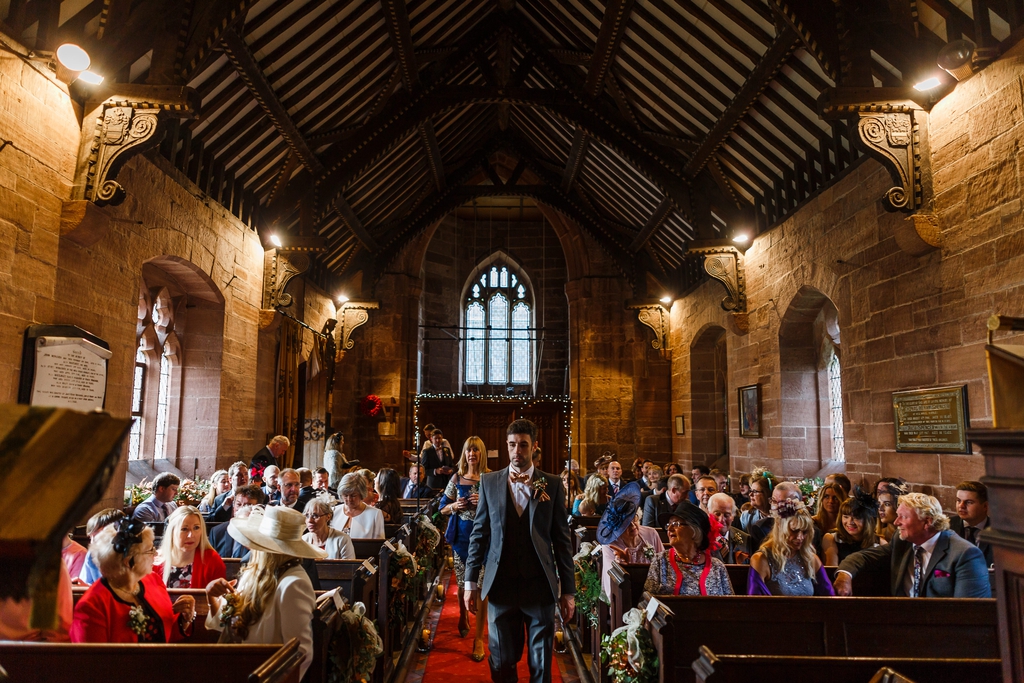 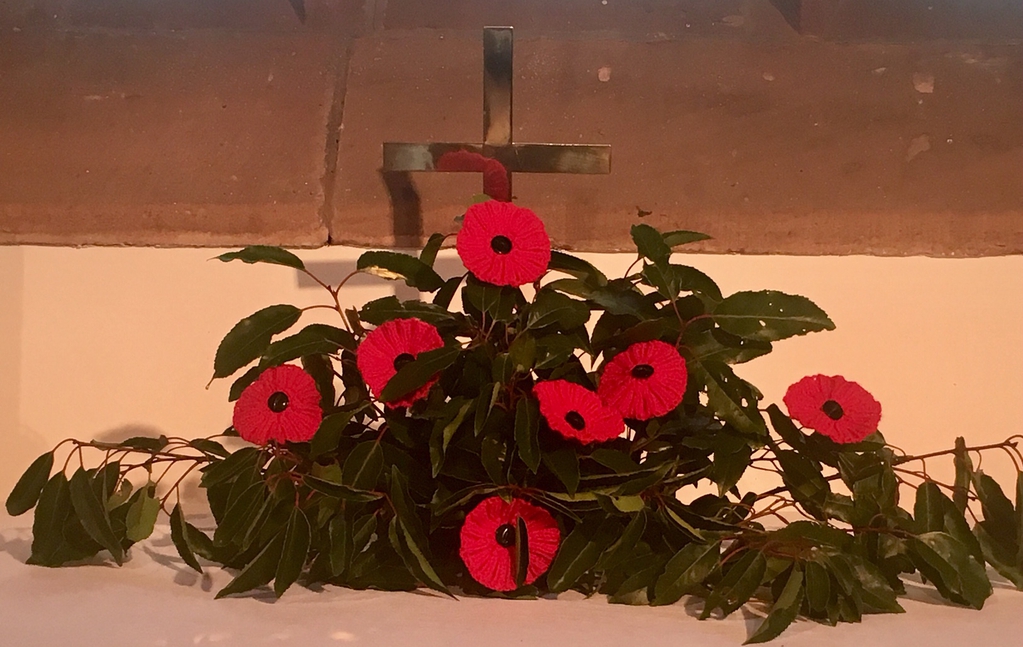 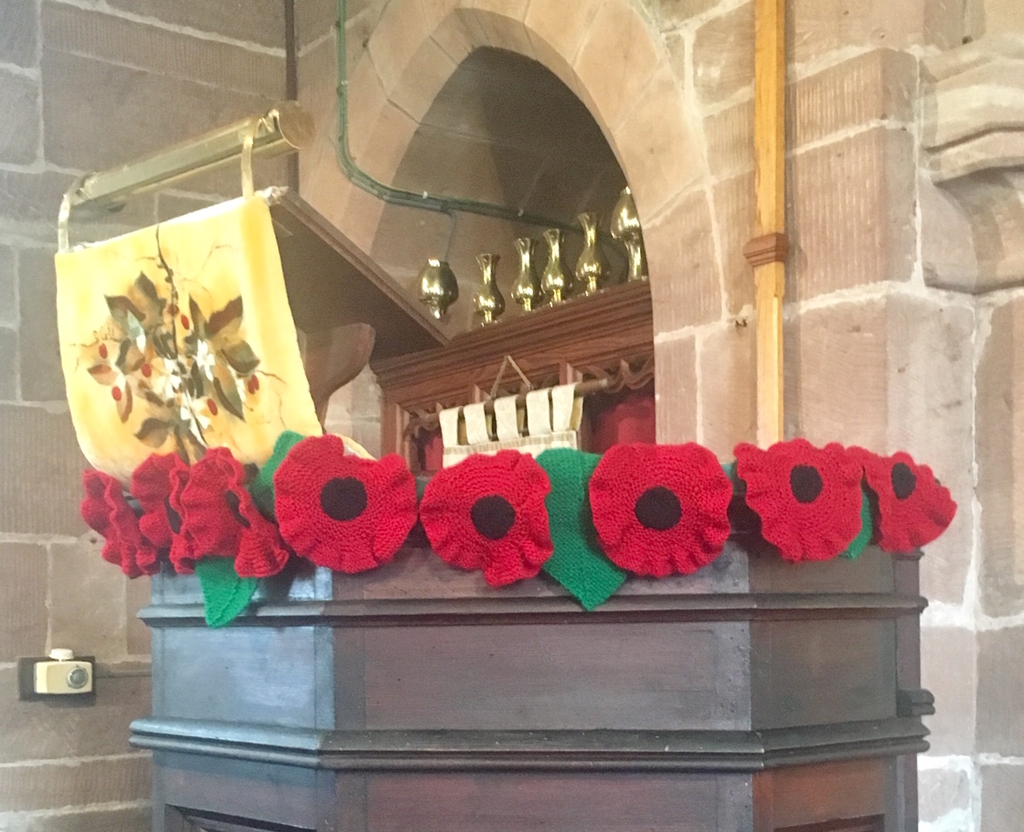 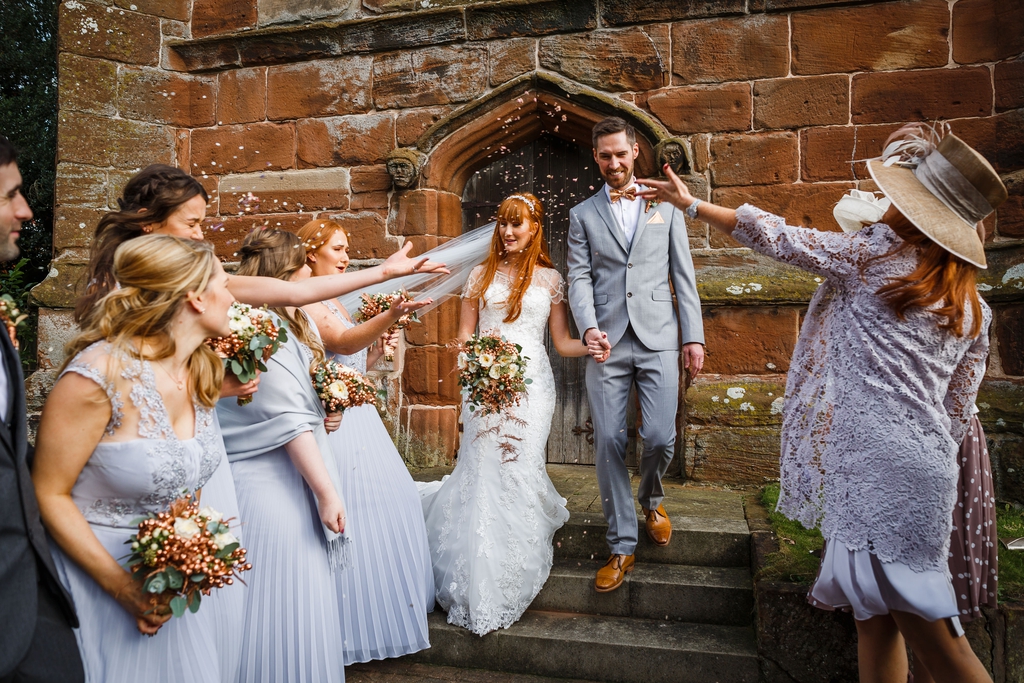 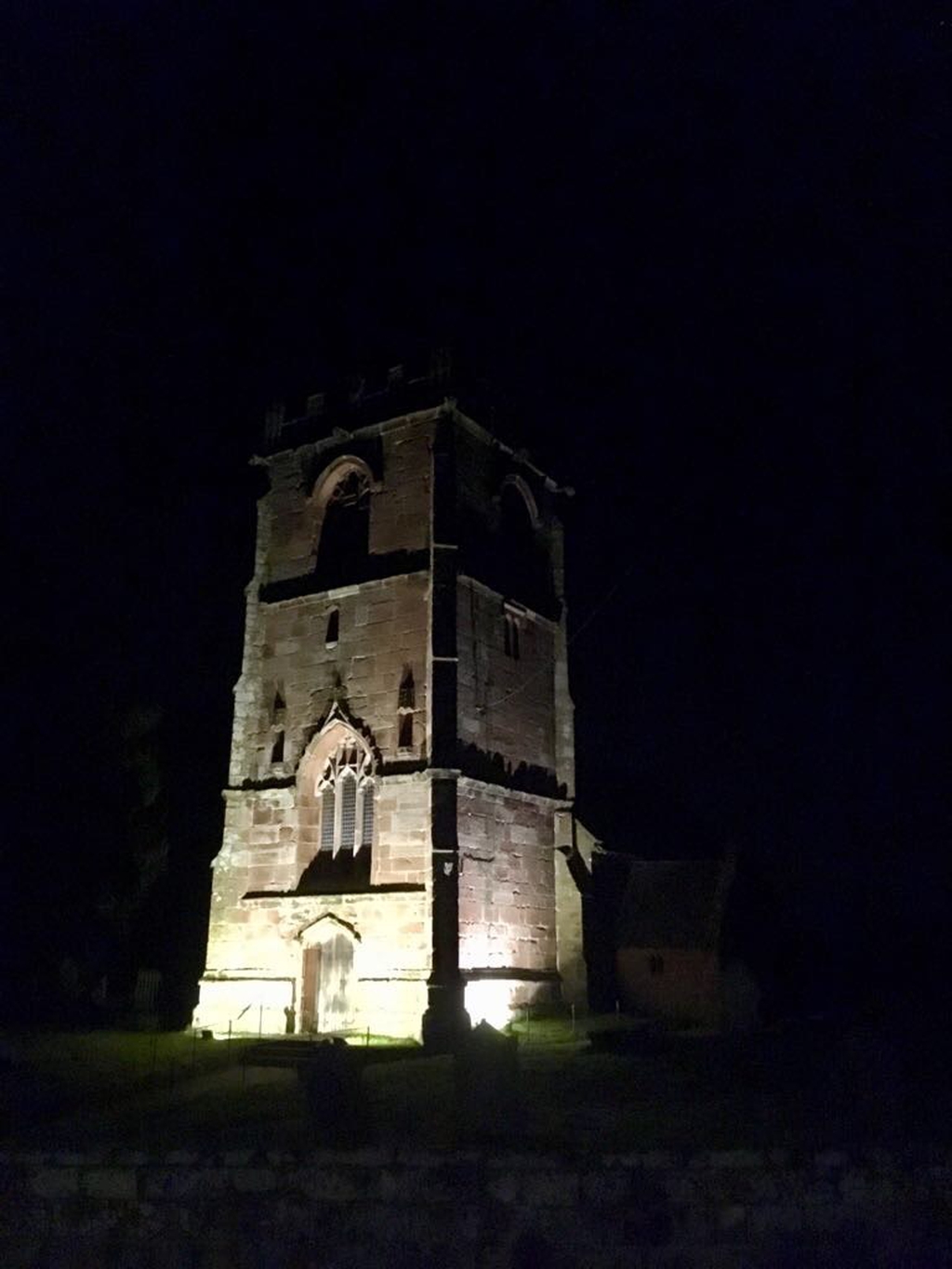 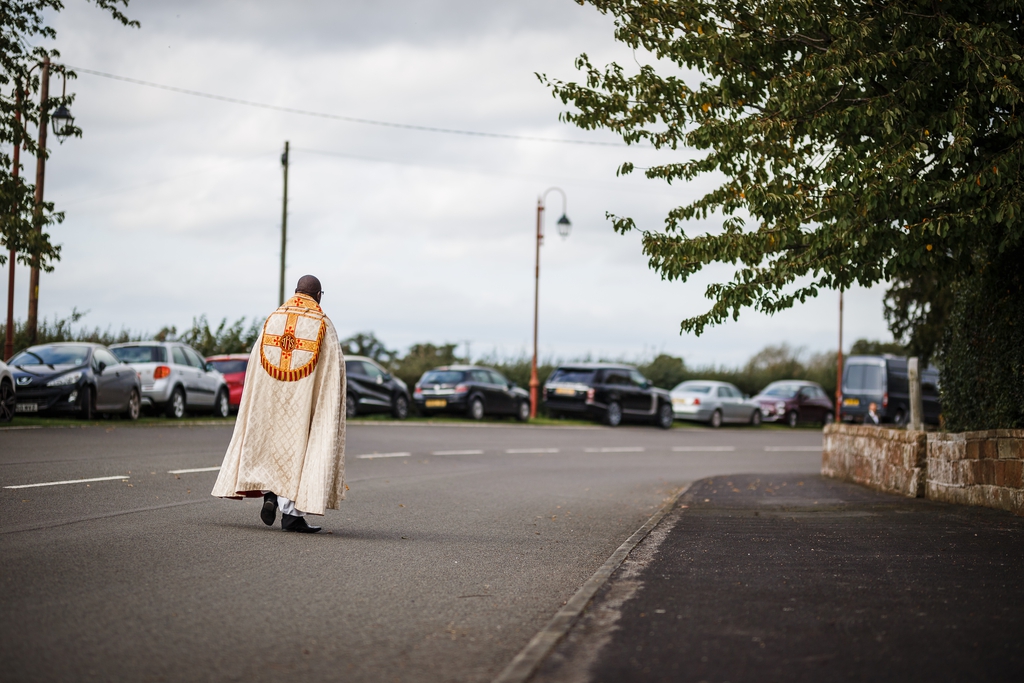 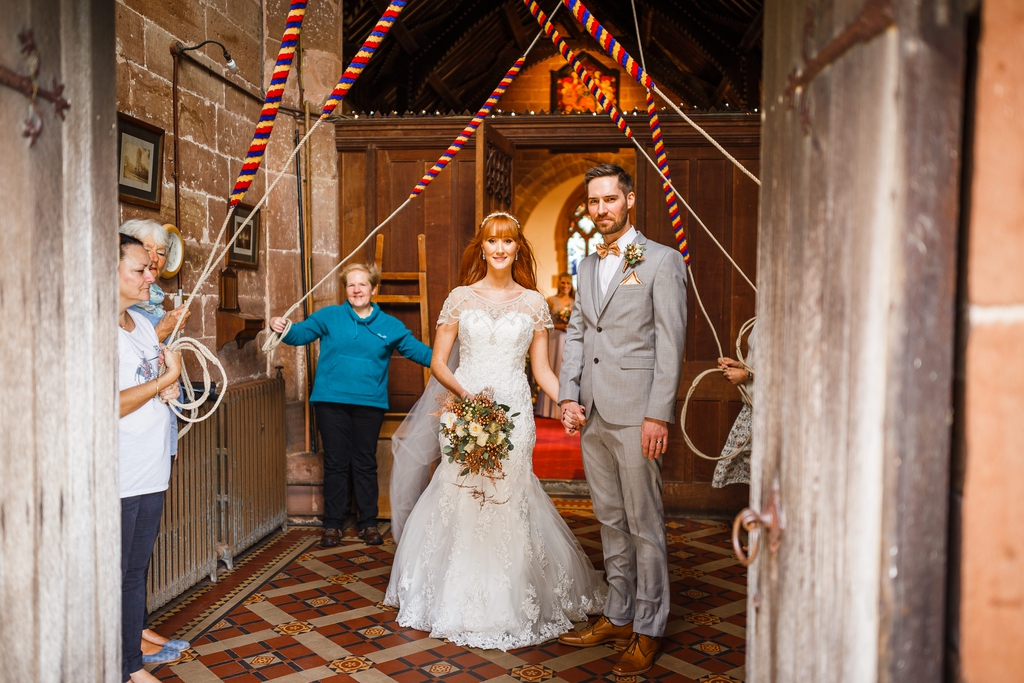 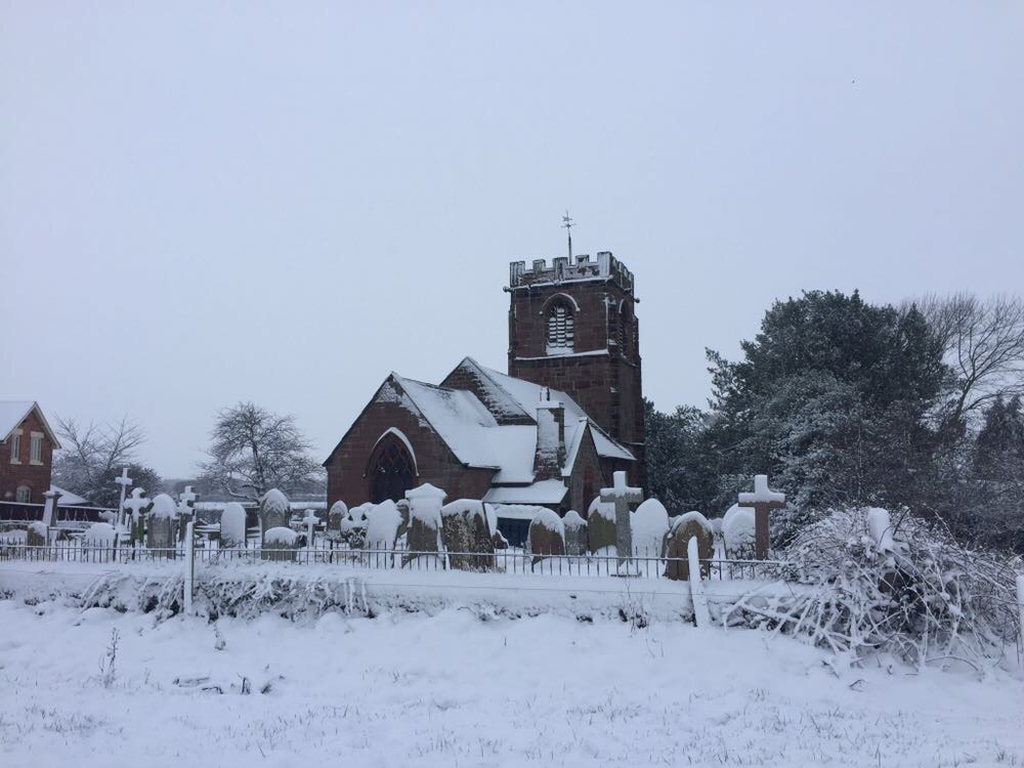 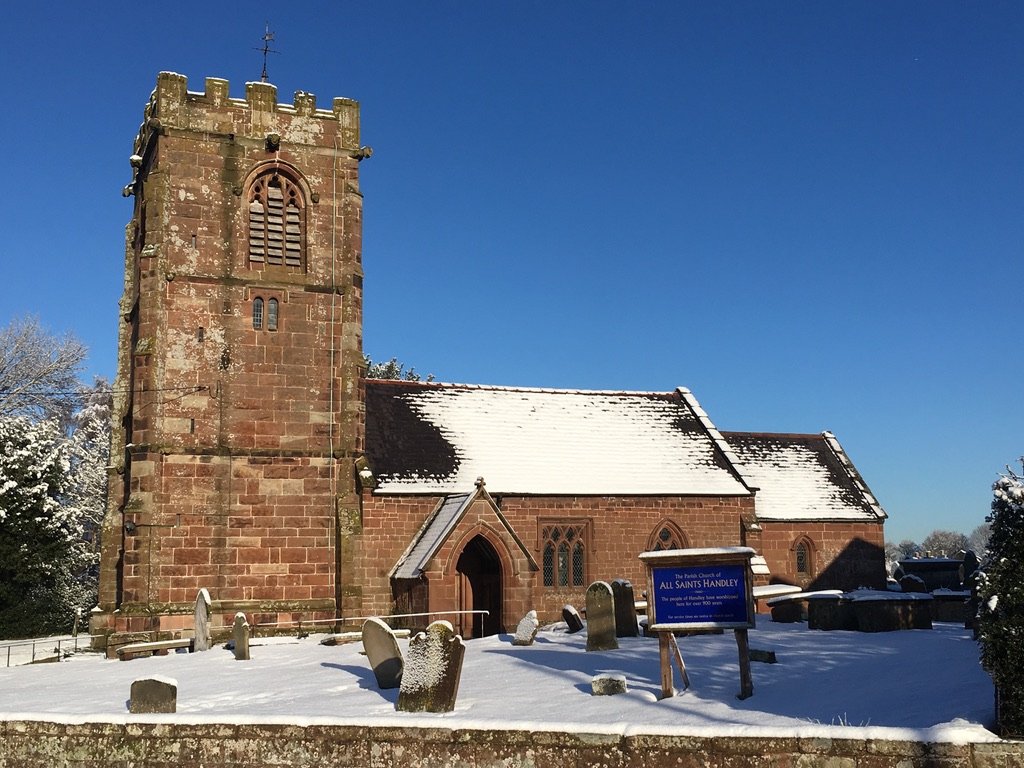 All Saints is rural village church with a rich history ( see below).  We have two services per month on the first and third Sundays.  We have an extremely friendly congregation who would welcome new parishioners and visitors alike.

The Church stands in a commanding position on the Old Whitchurch Road, overlooking Handley village. There was a church on this site in medieval times, which bears out the claim on the notice board that the villagers have worshipped on this site for 900 years.

The present building, apart from the tower, is mainly 19th century at which time it was restored by James Harrison, nephew of Thomas Harrison, the architect responsible for the castle and other buildings in Chester.

In 1200 the Church was given by Allan de Boydell, the then Lord of the Manor, to the Abbey of St Werburgh. After the dissolution of the monasteries the Advowson (the right in English law of presenting or appointing a nominee to a vacant ecclesiastical benefice) was passed to the Dean and Chapter of Chester Cathedral, who are still patrons, with the addition of the Bishop of Chester. Today, the benefice, jointly with Tattenhall, is held by the Reverend Lameck Mutete. At one time All Saints had a Rector and a Curate.

The Church of sandstone, probably quarried locally, now consists of a nave, chancel, vestry, tower and south porch. A Cheshire Gazeteer, dated 1860, refers to a beautiful doorway in the Norman style on the North side of the Church. This last remaining example of the original building was destroyed in the restoration work carried out in 1854. Only the 16th century tower roof, window tracery, mouldings and arches, survived the restoration. On the South wall of the 156 feet (47.5 metre)high tower is an inscription in Latin which reads:

"This tower was erected in the Year of our Lord 1512 in the time of Richard Raulinson, Rector. Pray ye now for (him) and all the benefactors thereof".

History has it that at the time of the Civil War parishioners took refuge in the tower. There, they were besieged by Cromwell's cavalry, then stationed at nearby Tattenhall. The Parliamentarians, in an effort to dislodge the refugees, set fire to the main body of the Church. When Charles II gained the throne, Handley villagers lost no time in restoring their Church and the handsome hammer beam roof bears the date 1661and several sets of initials.

It is interesting to note that the Masons marks on the stone are identical to those on Tattenhall and Backford Churches. The dog chasing the hare, visible on the South East corner of the tower, is also a sign used by this mason.

The west doorway has an obtuse arched head with deep moulding and hood terminating in carved heads. Above is a three-light window and at either side niches with richly carved canopies, now empty.

The tower is embattled with gargoyles and carved heads.

The actual West door is very thick. When the outerboards were removed it was found that they had been fastened on to cover holes in which large lead bullets still remained, possibly dating back to the attack on the Church during the Civil War.

The six bells, re-hung over 50 years ago when the tower was strengthened, are of fine quality and are an attraction to teams of visiting bell-ringers from a wide area. The inscriptions on the bells indicate their age:

A brass plaque in the belfry indicates that the last two bells were given by C.B. Toller of Hawarden as a thanksgiving for the recovery of his son, who had been seriously injured in a hunting accident at Milton Green in 1906. Unfortunately these bells were hung cross -wise in swing to the existing bells and the strain caused structural damage to the tower. This was only recognised when the Reverend Steedman Davies, an architect before his ordination, came to Handley in 1948. For about two years the bells were silent until the tower could be strengthened and the bells re-hung. The work cost £2000, which was raised by local parishioners. During the repair work, charred timbers, believed to be associated with the Civil War, were exposed. A tablet in the belfry marks the completion of the repairs in 1952.

THE ROOF AND OTHER 17TH CENTURY FEATURES

All Saints most outstanding feature may be the beautiful hammer beam roof which is unusual for such a small Church.

"Whenthebodyofthechurchwasrebuilt,this17th centuryroofwasspared.Indesignit is an arch braced with collar and hammer beams, the whole being divided into three bays. The hammer beams rest upon wall posts now fixed upon new stone corbels. The brackets are vigorously carved and bear initials and shields together with the 1661date" (from "Old Cheshire Churches" by Raymond Richards).

The octagonal sandstone font and the oak chest both date back to the 17th century. The chest is inscribed "T.E. 1677 I.E." and originally had iron strap hinges and three locks so that it could only be opened in the presence of the Rector and the two Churchwardens. The chest is still in regular use.

Above the font hangs a Cartouche or Wooden Scroll memorial, treated 20 years ago by the Cheshire Record Office to halt disintegration due to dry rot. The inscription reads:

"Underneath in ye Isle lye the body of Johannes Edge, late of Golbourne and of Elizabeth, his wife, he died on October ye 20th 1684 and she April ye 16th 1704".

There are many references to this family. The initials J.E. appear on the church roof; Thomas Edge on a bill and the two sets of initials carved on the oak chest.

An old brass, which came to light during work on the vestry in 1890, hangs on the same wall near to the chancelarch. It reads:

"Memorandu that Mr Thomas Venables, first sonne of Thomas Venables, Esquire of Kinderton withen the Countie of Chester, begotten on the bodie of Elizabeth, daughter of Sir William Breerton, Knight, within the saide countie, dyed in his minorite in the lifetime of his sayd father and was buryed here in Handley Church, in the saide Countie of Chester, the XIII day of October 1572".

THE CHANCEL AREA
This suffered to some extent at the hands of the Victorian restorers.

The choir stalls may have replaced earlier oak stalls as all the pews in the nave are of old oak. The East Window is of stained glass and is the work of a firm of high repute. It is a memorial to "Howard Comber of Bombay and Liverpool, 28th February 1914".

Alterations to the chancel floor, carried out in the 1980's, were made when steps to a small altar were removed to allow the introduction of a larger altar at floor level. This has a very attractive frontial and reredos.

Over the chancel arch hangs the Royal Arms Board, restored in 1985 by a specialist from the Walker Art Gallery in Liverpool.

The lectern, date unknown, is attractively carved and was probably the work of a local craftsman.

The vestry and organ (which is still in use)were added in 1889.

There is seating for about 120 in the old oak pews which are similar in design to the pulpit. On the North side is a 19th century stained glass window placed there by the Sandbach family, local landowners who also built the village school. This area is dominated by the beautiful hammer beam roof previously described.

Probably a 19th century addition, the South Porch has chains that used to be hung across the entrance. These were apparently installed by the Reverend William Paull, Rector 1850-1883, to keep his sheep out of the Church when they were grazing in the churchyard which was then part of the glebe.

In the churchyard all the oldest gravestones are on the South side. There was less space provided to the North side because it was considered to be the devils side, and the idea of being buried there was not popular. For this reason old churches are very seldom found in the middle of the churchyard. Bodies were always carried clockwise, with the sun, round the Church. This was because it was considered unlucky for the deceased to go "Withershines" against the sun. There were extensions made to the churchyard in the last century, the most recent being on the North side.

Although the Church was dedicated to All Saints on1st November,it was agreed by the Parishioners in 1726 that the "Wake" festival (to commemorate the dedication of the Church)would be held on the Sunday nearest to July 21st. This meant that it would coincide with "Rush-burying", a tradition of Northern churches, where fresh rushes were strewn on the stone floors of the Church. The Wake festival was still being celebrated towards the end of the 1900's.

Interesting Church plate and a set of hand bells at one time used in carol singing around the parish are worthy of mention. There is also a fine Elizabethan chalice said to be a Parker chalice and one of few such chalices made to commemorate the 16th century Archbishop Parker. Some experts hold that it is of medieval origin and that it is the work of a local craftsman. Both claims may be correct. Apparently some Parker chalices were "Made-Up".

An authority on church silver from the Victoria and Albert Museum has suggested that the chalice be sent to the Museum to gain an expert opinion on its origins.

Thesilvercommunionplateincludesan18th centuryflagoninscribed"1747,gift of the Reverend Thomas Ince", and a paten, made by Lowes of Chester in 1889. The collection plates are of Sheffield plate.

The more valuable records are kept in the County Record Office. A list of Rectors shows that the first, about 1200, was William de Boydell. The last before the joint benefice was one William Alexander Laing. There were altogether 41 holders of the living.

The parish registers begin in 1570 and Churchwarden accounts date from 1710. Early entries in the accounts show that in May 1710 2s 6d was "spent upon ye Irish parson; 2d given to two cripples; 3d to five seamen; 6d to a poor woman with a letter of request which ensured that she would not be whipped as a vagrant; 2s 0d to a poor clergyman and 2s 0d spent at agreeing about ye Clock and setting it up".

The name Handley is a corruption of "High Lea", meaning high pasture. The traveller climbs up to Handley from the low lying Dee Valley area. Some little distance away on the side nearer to Milton Green is a spinney known as "the Govahs". There was believed to be a camping ground nearby that was used by Roman soldiers when marching from Chester to the South. It is said that the soldiers erected an altar to Gove in the spinney, hence the name. Locals feel that the area is sinister and many dread to walk by the area at night.

On the village side is the school and school house now converted into a private residence. The school was built by Samuel Sandbach in 1841and closed in the early 1970's.

Since the 1960's the village has undergone many changes. The village shop and then the Post Office were closed and converted into private houses. The Calverley Arms, a coaching inn dating back to the 1600's has remained open and is a well known local landmark now known as The Calveley Kitchen.

The village originally contained many workers cottages owned by the neighbouring Bolesworth or Aldersey Estates. Few of these original cottages now remain, some having been destroyed and others converted into larger privately owned homes.

In the early 1990's a bypass was built, taking the A41out of Handley and giving this beautiful conservation village the air of peace and quiet that it has today.