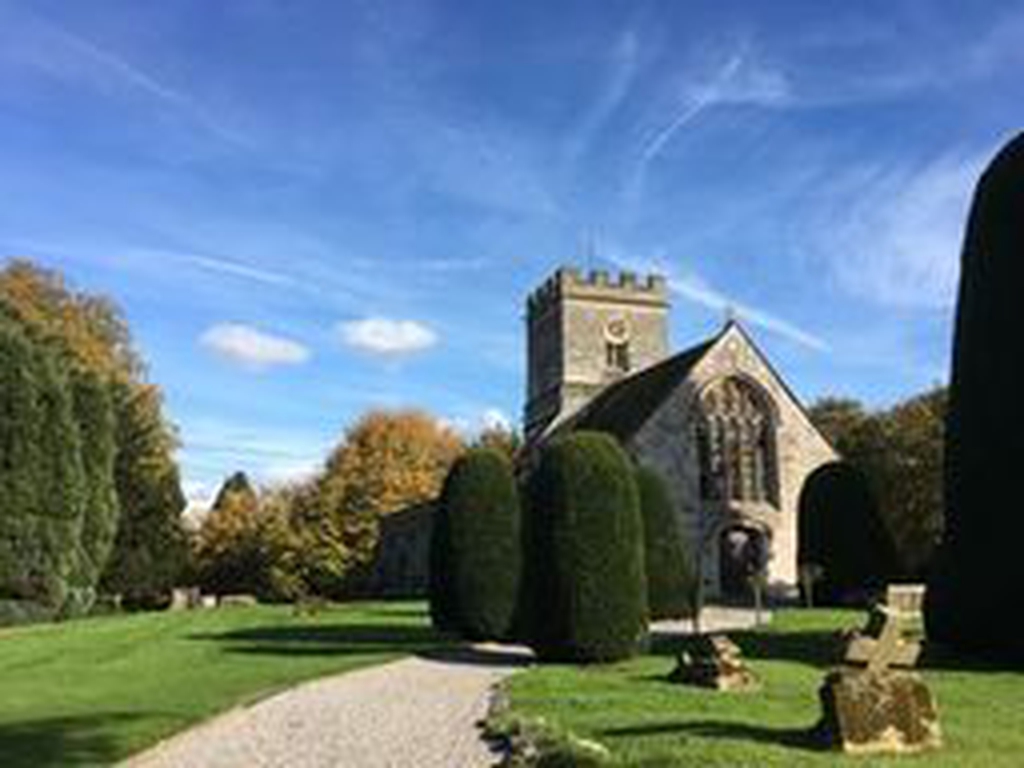 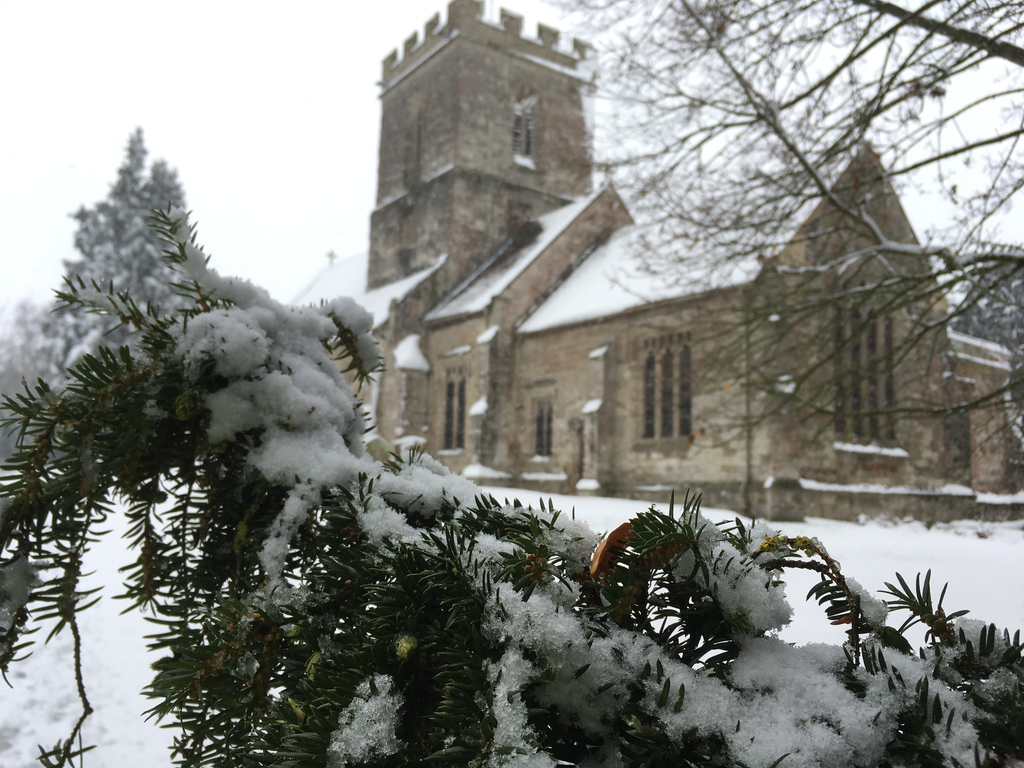 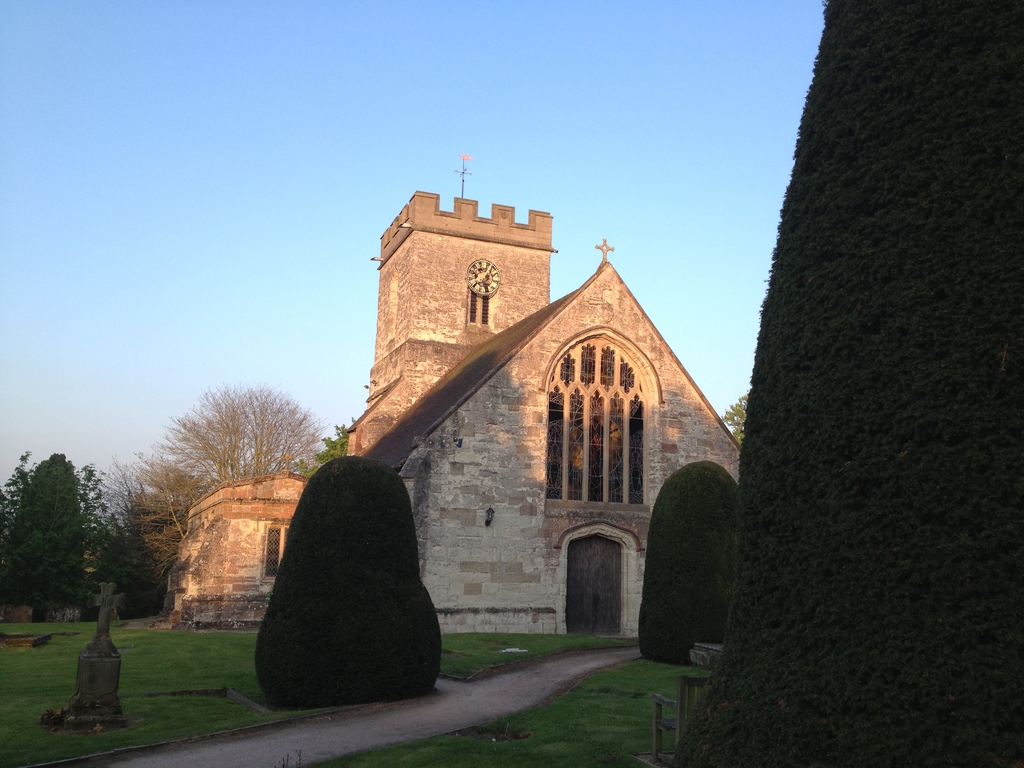 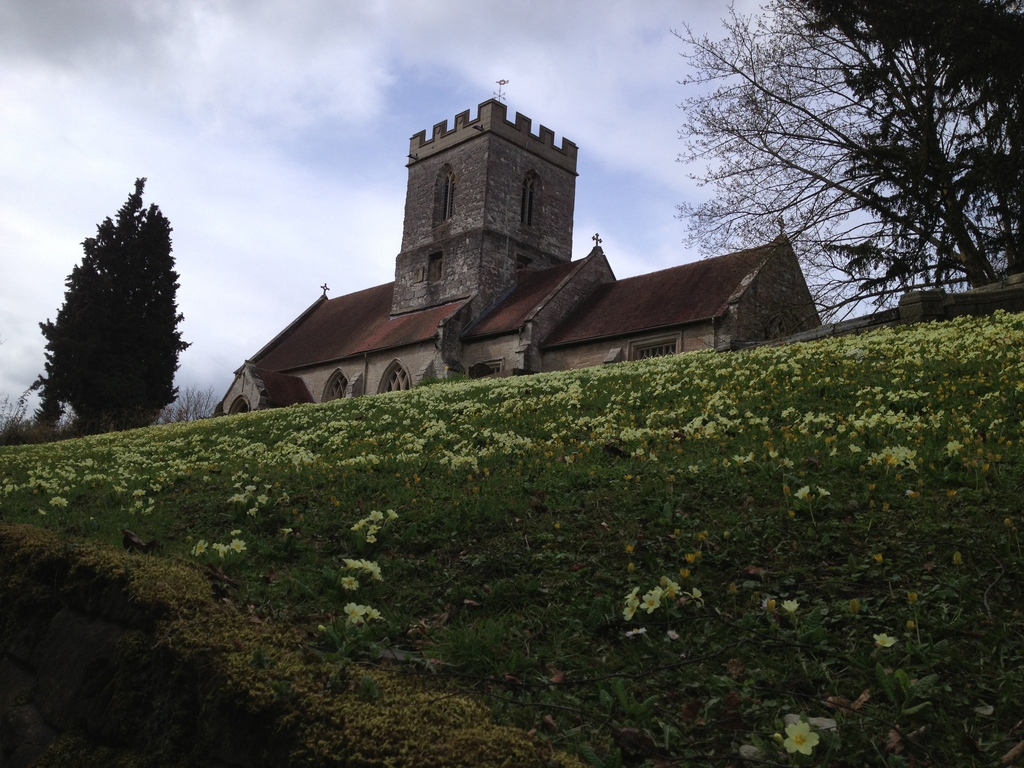 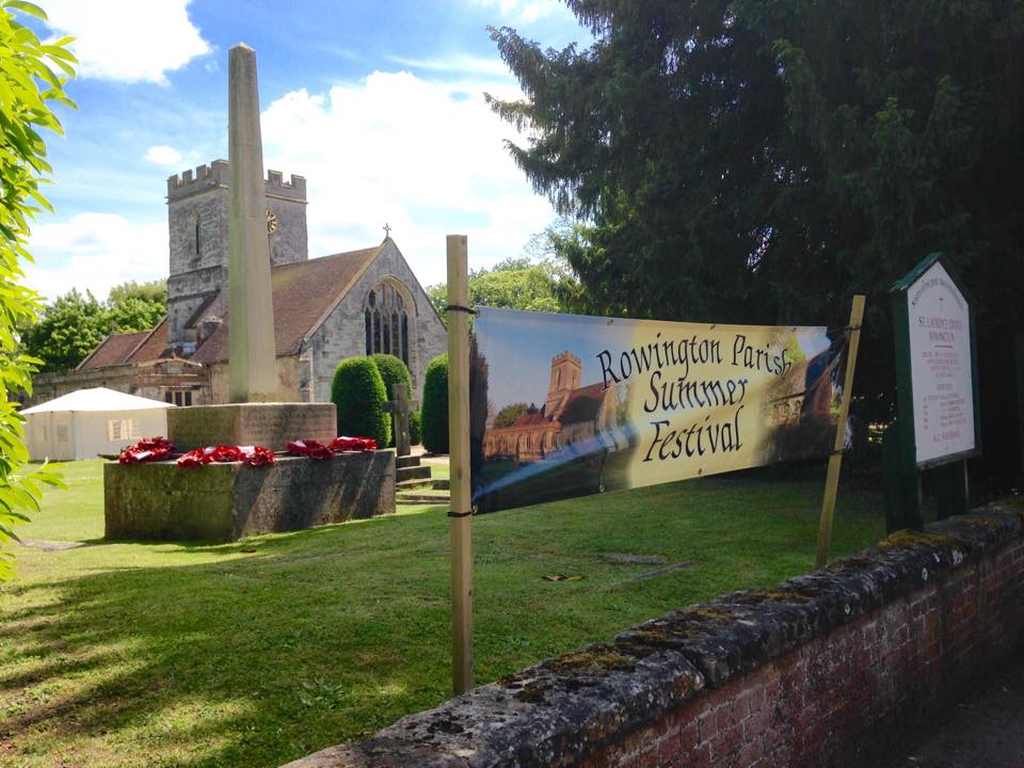 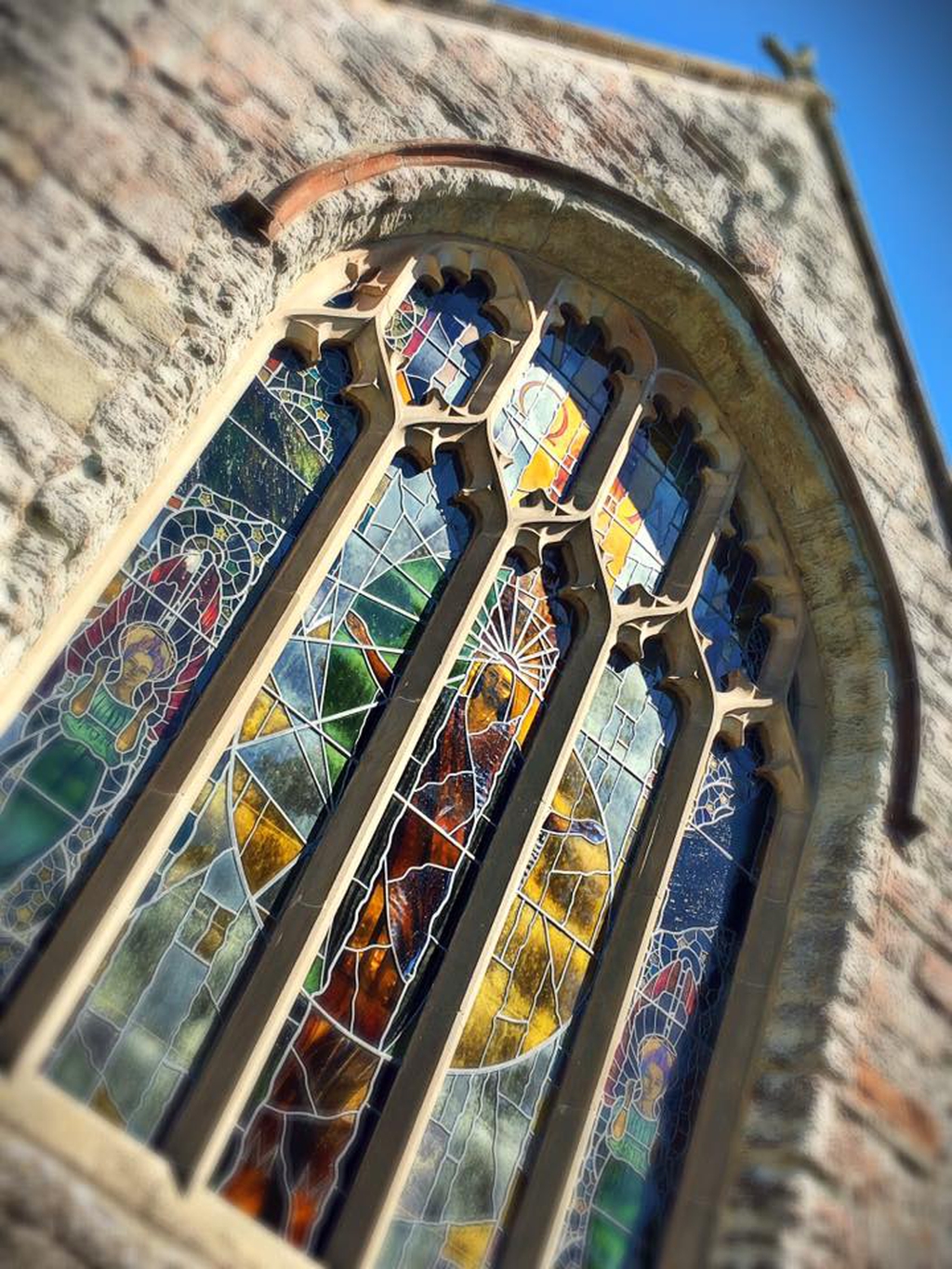 The entrance to the churchyard is on the west side by single and double gates, which were late Victorian but have recently been replaced in the same style and design. The parish war memorial stands on the west boundary, but there are no memorials or graves of note. The dominant feature of the entrance is the yew trees which have been clipped into the shape of domes.

The architecture of the church has developed over the centuries. It probably dates from the early 12th Century, with the first written record of a church at Rowington contained in a deed of 1157. The nave north wall is Norman; in the 1280s it was given a new west wall and considerably widened southwards. The tower was built in c1300 followed shortly after by the Chancel which in 1490 was given new south windows. A Chantry Chapel was added on the north side of the Chancel in the 1400s, this was incorporated into the north aisle in 1554. The Lady Chapel was created in 1960 when the Chancel screen was moved across to the north aisle.

In 1872, the interior of the church was given a complete restoration by GF Bodley. Much of the early work and fittings were removed, though some of the furniture remains: a medieval alms box carved from a single piece of oak; a Norman tub type font; a rare 15th century stone pulpit; the communion rail dating from 1682 and on the high altar, a refectory table derived from the original Elizabethan. The body of the church also contains a small altar with a fossil marble top, given by Reverend G Weale in 1797.

The pews, lecterns, screen, vestry and altar cross all date from the restoration. The painted ceiling of the north aisle is all that remains of the highly decorative work.

A prayer corner was set up next to the Lady Chapel in 2011, in memory of John Hibbs, a member of the congregation. Here you may light a candle, remember, pray for and talk to loved ones and friends who have died.

The church is notable for its central tower and the ‘Christ in Glory’ stained glass window which dominates the west end of the church. The modern porch was added on the south side in 1906, replacing the brick and timber porch which was demolished during the restoration in 1872. Also on the south side is a small door which leads into the Chancel. The red sandstone on the top course of the stonework was a gift from Mary 1 and came from Kenilworth Priory. Beside the north door is a holy water stoop.

There is some lovely stained glass in the windows which include two designed by William Kemp. The east window dates from the 1872 restoration and on the south side of the chancel is a small window filled with fragments of medieval glass.

The stained glass in the west window was commissioned to celebrate the new millennium in 2000. The subject is ‘Christ in Glory’ which was designed and executed by the artist Graeme Wilson, to reflect something of the spirit of the Church and the local area, known as the Forest of Arden.

The window is dominated by the central figure of the Risen Christ. Unusually, he is depicted within a double ‘aureole’ – that of the perfectly circular, rising Easter sun, together with a geometric spiral formation based on the pentagon. Also in this composition, the spiral formation, with its so-called ‘Divine Proportion’ is a symbol of spiritual growth and rebirth both in mankind and throughout creation. There is much reference to nature, flowers, foliage and the night sky bringing together the local – Shakespeare, Flowers, Forest of Arden, and St Laurence interior - with the universal.

The tower holds six bells in a steel frame. The oldest dates from 1609 with the newest added in 1959. It also houses a clock, with works which date from about 1756. On the top of the tower is a weather vane consisting of a copper fan in the shape of a boar’s head, which may date from about 1700.

The bells of St Laurence are now rung regularly by the Rowington Band of Bell ringers for special church services and weddings. The band meets every Wednesday and Friday evening and is always looking for new ringers. No experience is necessary, expert teaching can be arranged.

FIRST SUNDAY of the month

6.00pm Evensong – a traditional service from the Book of Common Prayer

SECOND SUNDAY of the month

FOURTH WEDNESDAY of the month

FOURTH SUNDAY of the month

FIFTH SUNDAY of the month

8.30am Holy Communion from Common Worship