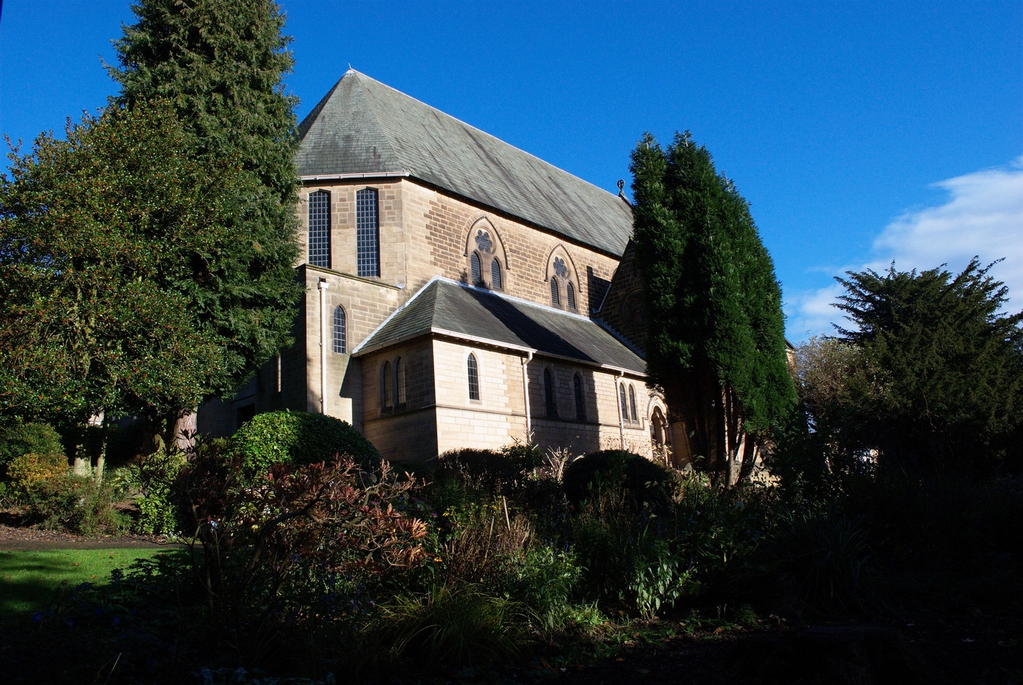 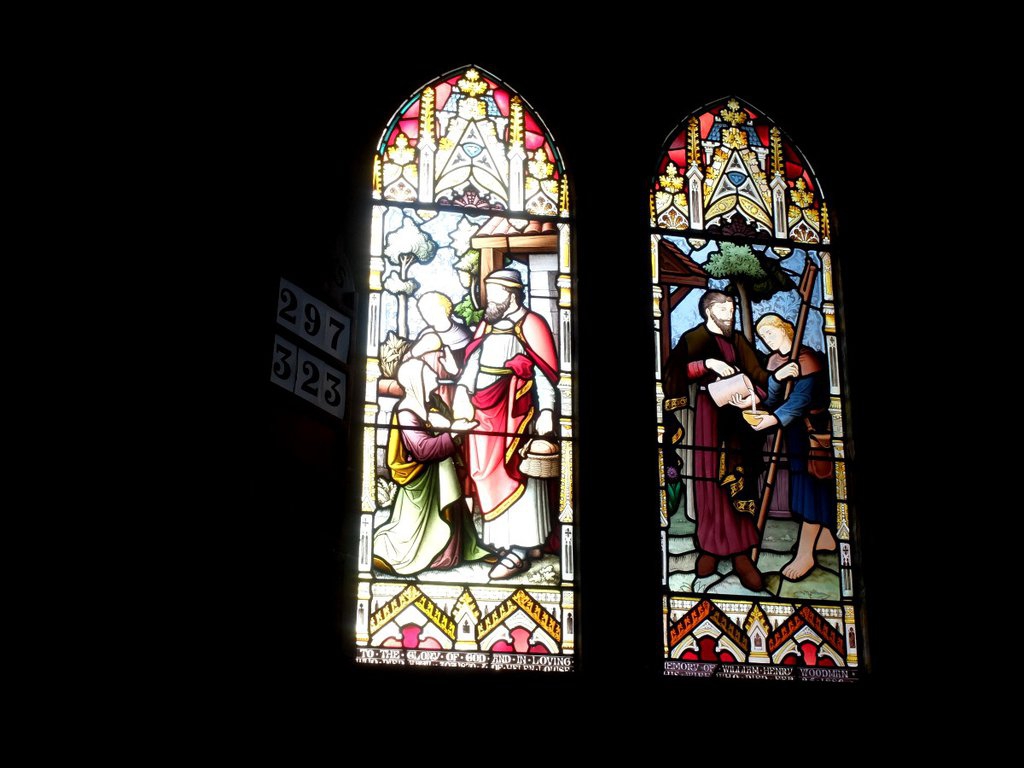 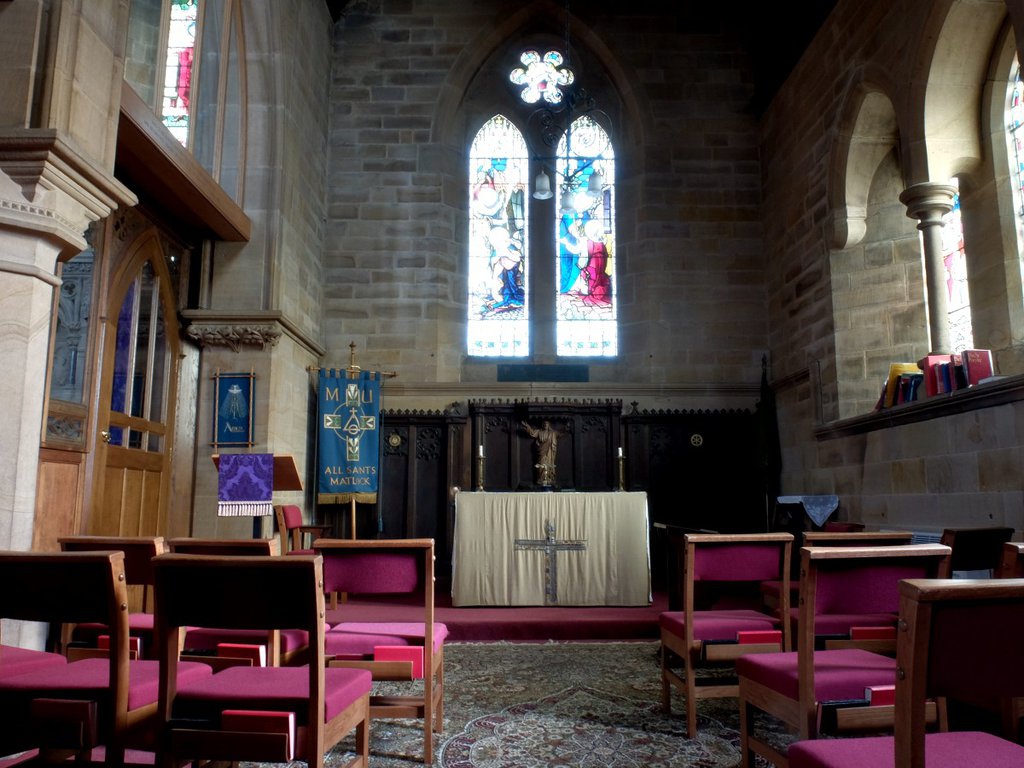 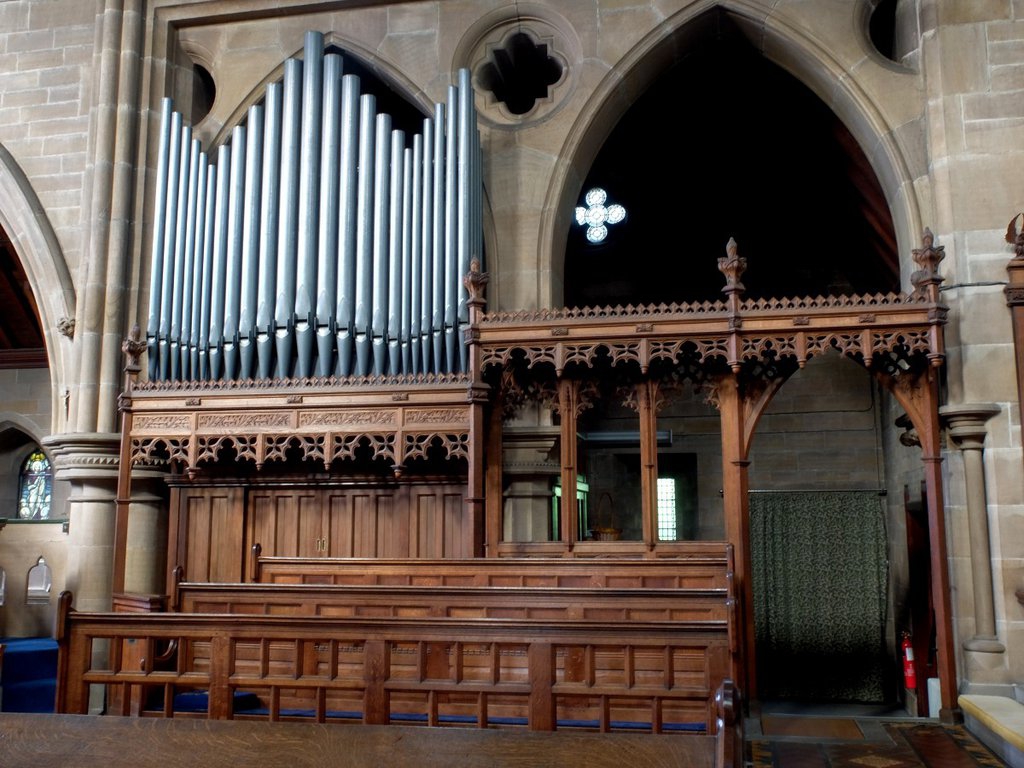 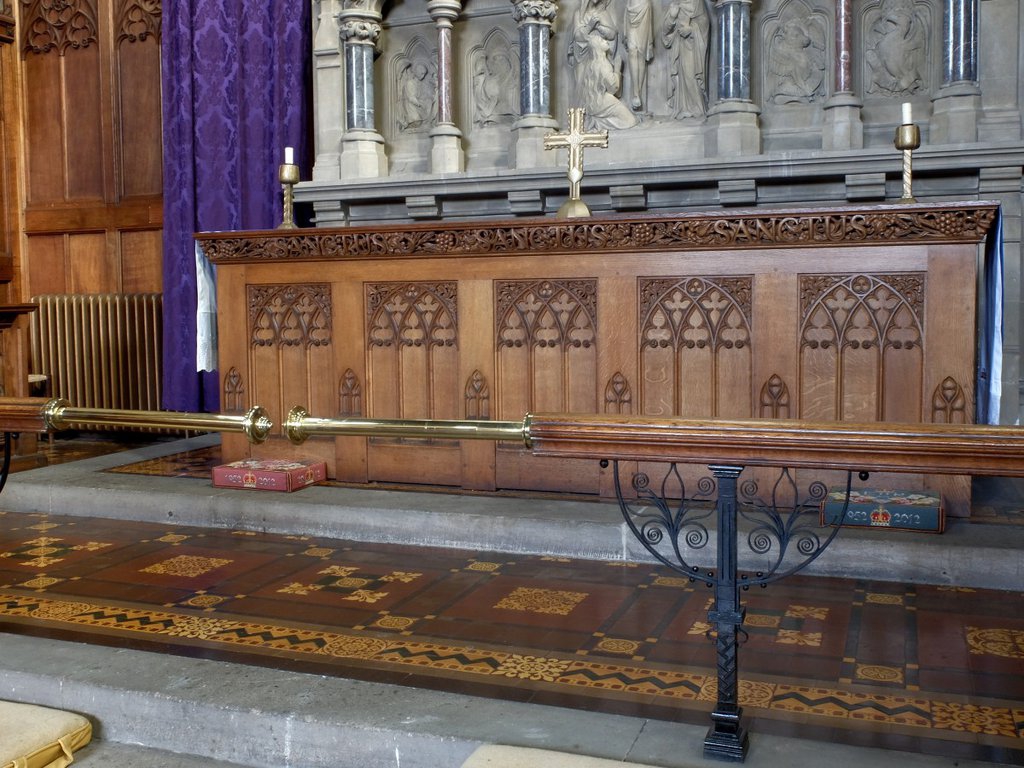 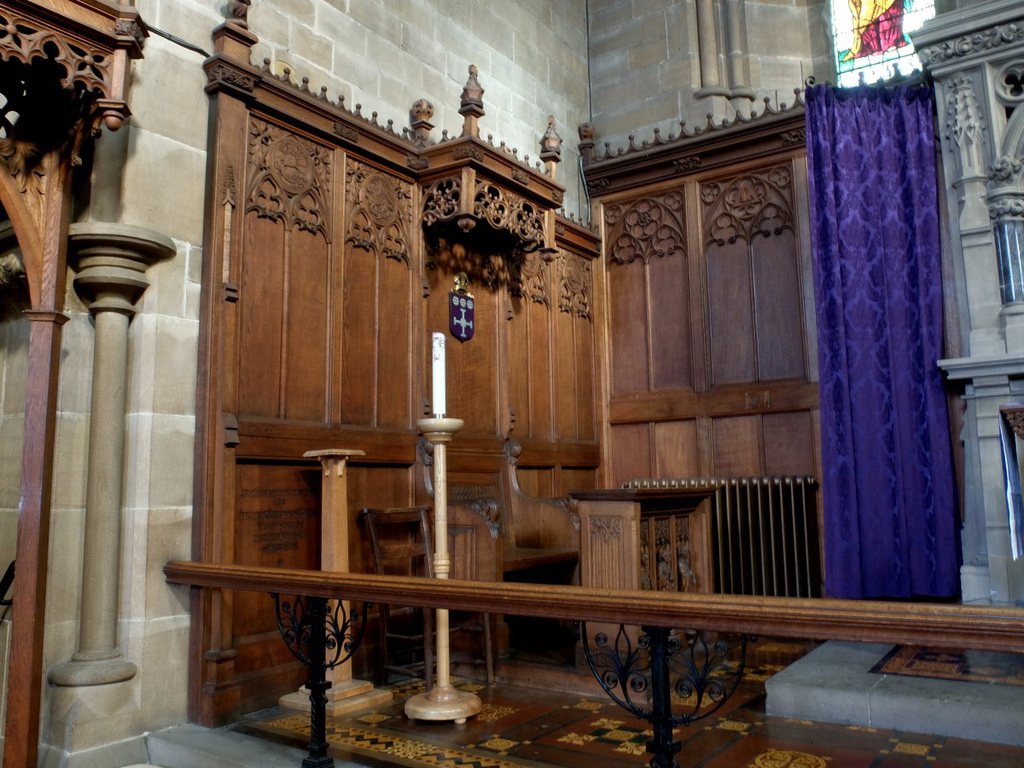 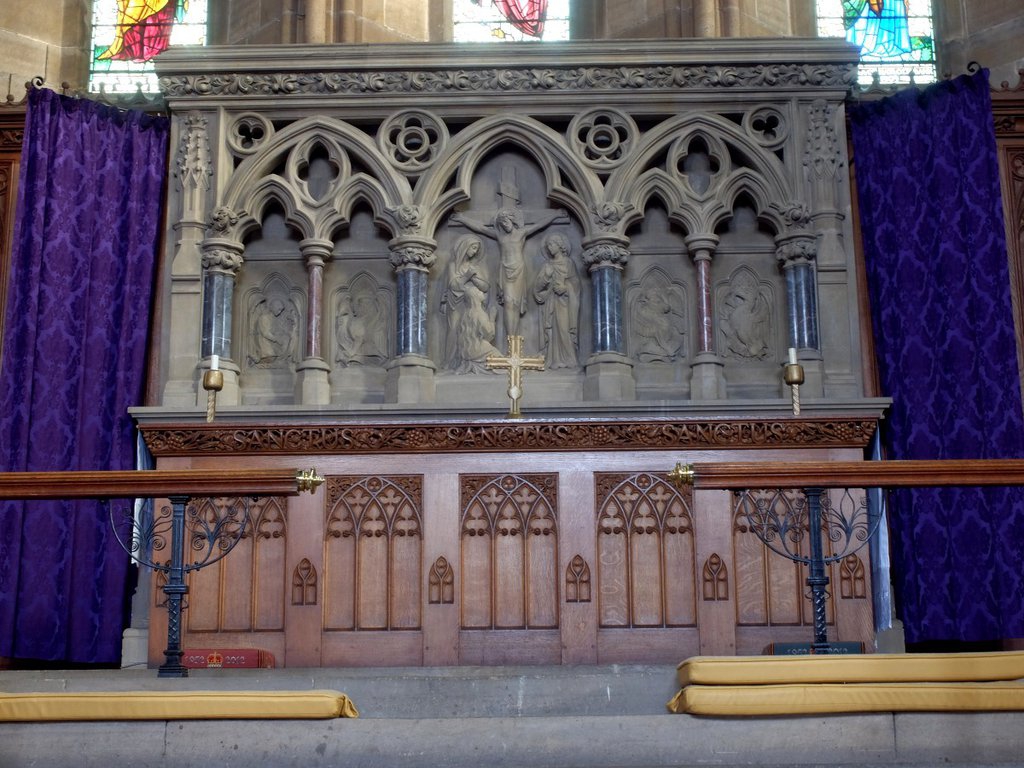 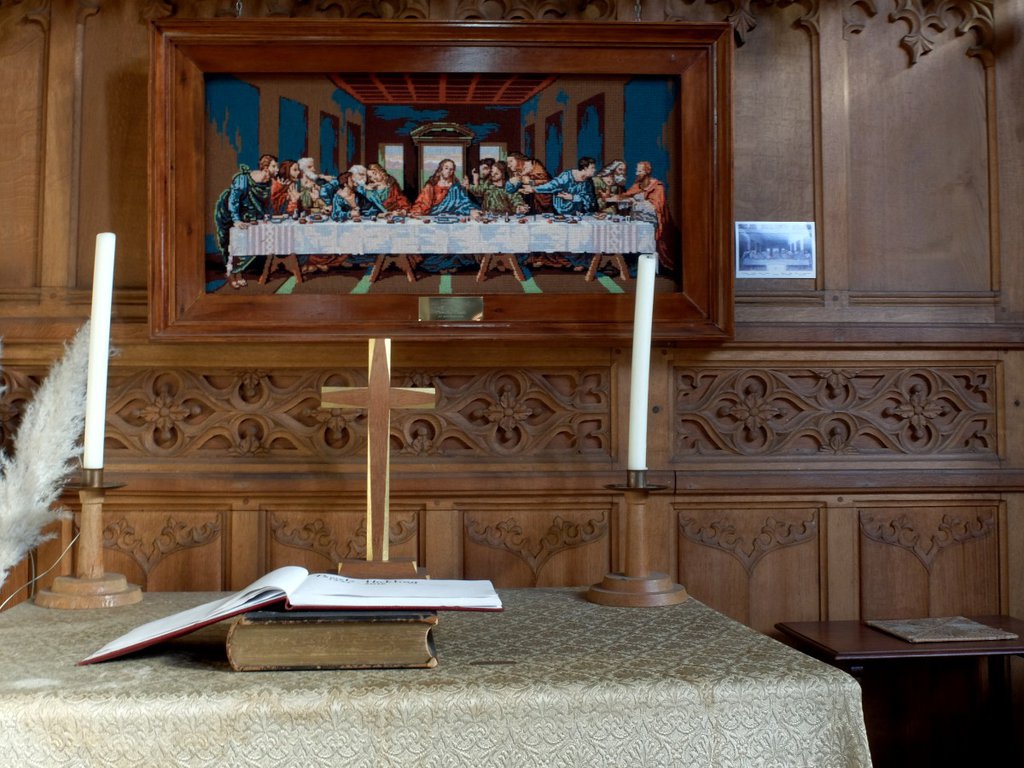 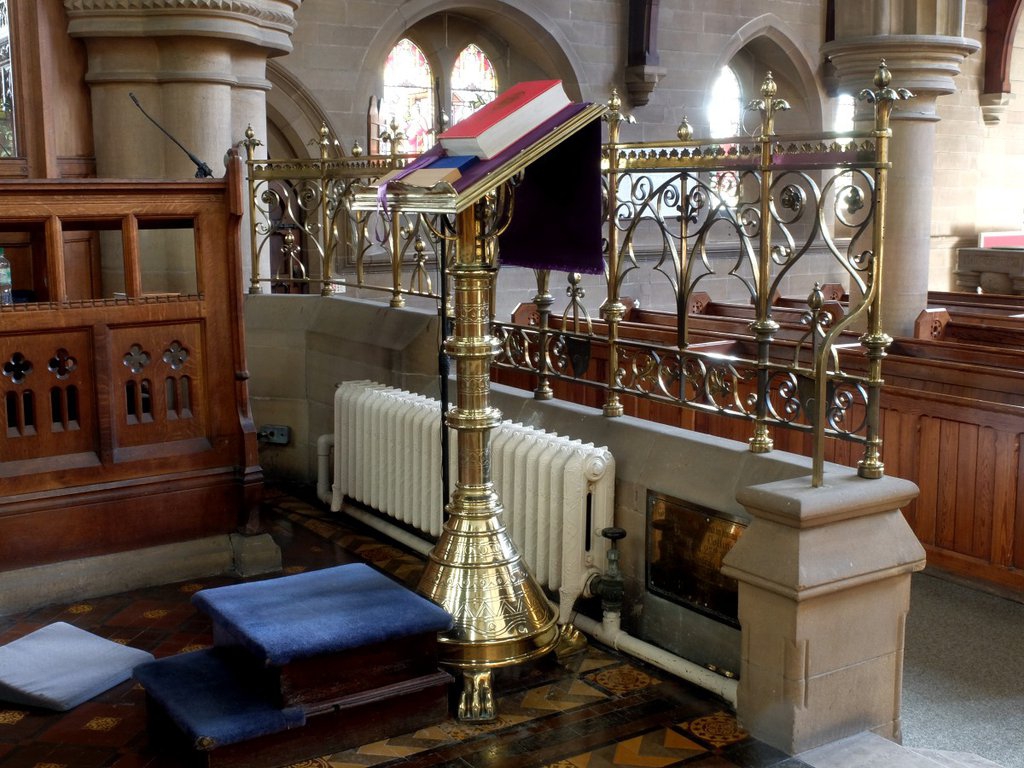 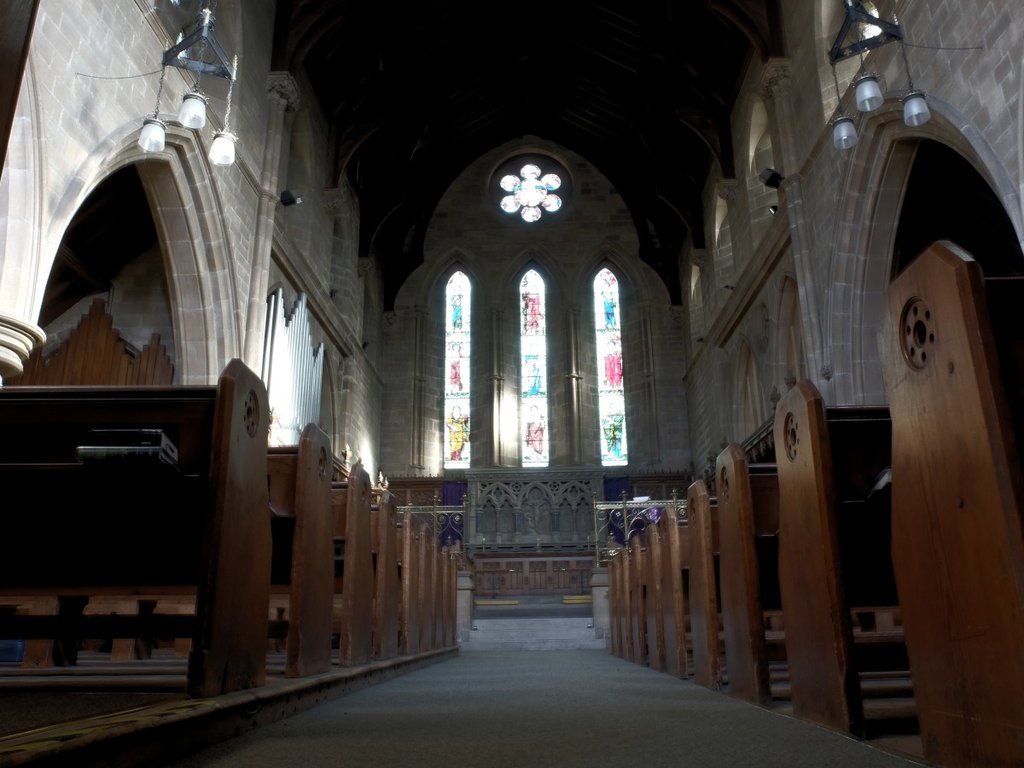 All Saints Parish Church, Matlock
Services and events
News and notices
About us
A leaflet about the church organ by Forster and Andrews 1886
A leaflet containing a descriptive tour of the church
Church Hall
History of the Church
Find us
Smedley Street Matlock Bank Matlock
Get in touch
(01629) 581233
Facilities
More information
Social
Edit this Church

All Saints was built between 1882 and 1884. The original design was for a much larger church tower and spire, but funds ran out and a temporary west wall was built instead. The present west end of the church was completed in the 1950s.

Starting at the West End, you are in the newest part of the church, comprising entrance vestibule, baptistry and gallery. These were built in 1958 at a cost of £16,000 to a design by Charles H Potter of Matlock. The baptistry is now the children’s corner.

In 2013 the top panels of the inner doors of the vestibule which open into the nave were glazed, replacing the wooden panels. This was dedicated to the memory of Dr. Alan Robinson, former Reader at the Church.

The Windows in the North Aisle, made by Messrs Heaton, Butler and Bayne of London, were presented by the congregation in memory of Job Smith JP, the first Vicar’s Warden who served for 22 years.

The St. Nicholas Altar stands at the end of the north aisle. Dorothy Cowle made the tapestry of the Last Supper in 1975 as part of her Bishop’s Certificate.

The Pulpit is part of the original furnishings of the church.

The Brass Screen was given in 1898 in memory of Charles Collinson who chaired the first meeting of the congregation of the Mission Room in 1876.

The Lectern was given by the Sunday School teachers and scholars prior to the opening of the church in 1884.

The Oak Parclose Screens around the Victorian choir stalls were designed by a Matlock architect, W N Statham, and executed by Messrs Advent Huntstone of Tideswell. They were presented in 1935 in memory of Miss Anne Hodkin by her nieces and nephews.

The Reredos of Caen stone with marbled pilasters was presented in 1898 by Thomas P Ryder of Notting Hill, London. Our Lord crucified with his mother St Mary Magdalen and St John form the centre group. They are flanked by symbols of the four Evangelists.

Above rises the East Window in memory of the Revd John Higgs who gave the site of the church. The window was given in 1905 by his cousin and heir, Thomas Dakin of Derby. The window, based on a design attributed to Burne-Jones, was made by William Morris and Co of Merton Abbey, Surrey. The central light depicts Christ with the cross as a tree of life, the Virgin Mary and St John as a priest holding a book containing the opening words of his Gospel. On either side are the four Evangelists with Saints Peter and Paul (robed as Old Testament prophets) below.

The Altar, which replaced an earlier one, together with the Oak Panelling on either side of the reredos, was made by J W Wippell & Co Exeter. It was installed in 1928 as a memorial to the first Vicar, Revd Adam Lowe. The Panelling on the north and south walls of the sanctuary was installed in 1936 in memory of the Rt Revd Edmund Pearce, first Bishop of Derby, and the Bishop’s Chair and Prayer Desk in1936 in memory of James Potter of Matlock Bank.

The Lady Chapel was furnished as such with its own altar between 1925-27. Its East Window is in memory of Elizabeth Briggs, one of the early benefactors of the church. Two of the south windows, emblematic of Our Lord the Good Shepherd, are in memory of Emily Augusta Leigh. The third window, in a modern design, depicting "All Saints" was installed in 2005 in memory of Philip Turner. The Chapel was refurbished in 1945 in memory of the Revd W H Nixon, Vicar from 1926 to 1941. The altar, reredos and side panelling were designed by a member of the congregation, A H M Harding, a retired colonial civil servant and engineer. The Chapel was screened from the chancel with glass in 1992, thanks to a bequest from Edith Slack.

The Lady Chapel is used for Sunday evening and weekday services. It is a place of prayer and requests for prayer can be placed on a board there.

The two eastern most Windows in the South Aisle are in memory of W H Woodman and his wife Louise. The two windows to the west illustrate the text "Lead Kindly Light" and are in memory of Mary Potter.

The Font carved with a design symbolising All Saints is part of the original church.

(The following items are stored in the Vestry for safe-keeping):-

The Communion Plate was given in 1884 by Elizabeth Briggs in memory of her parents. A Second Communion Chalice was given by Elizabeth Tysoe in 1933. The Silver Communion Bread Box was presented in 1951 in memory of the late S N Thorpe, a Headmaster of All Saints’ School. Mr Gordon Turner and his wife Mary gave a ciborium in 1979.

- a white chasubule, burse and veil, designed and made by the Revd Leonard Childs, was given by Matlock Parish Church (St Giles) in thanksgiving for help during an interregnum. In 1984 Doris Brader, a member of the congregation, designed and made a cope which was presented by her and the parish officers in commemoration of the All Saints’ Centenary. Subsequently the set was completed with red, purple and green chasubles, given in memory of Eric Stevens, a long-serving churchwarden.