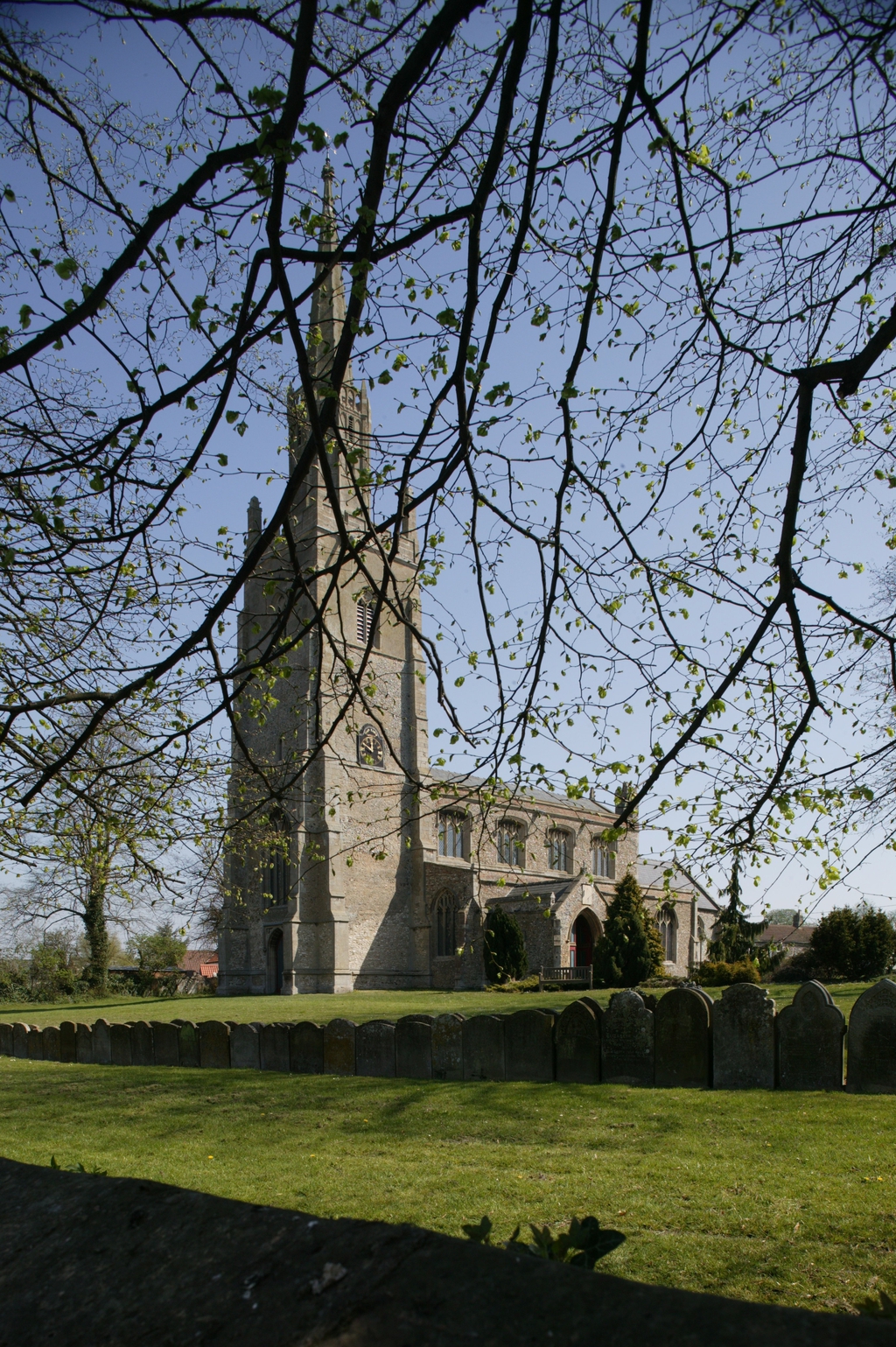 St. George`s Church is a Grade One Listed Building, situated in the middle of a conservation area.

The first church was built on the site in the 1200`s. It was a Gothic “Decorated” church. Within the first 100 years the body of the church was destroyed by fire and the present nave, with its enlarged aisles was built. The original east walls of the “Decorated” aisles are incorporated in the present ones. The only parts of the original church to survive are the chancel, the chancel arch and the tower. The east window still displays the original tracery.

During the rebuilding of the nave in the 1400’s, Gothic “perpendicular” windows were inserted in the side walls of the chancel and the ground floor of the tower. At the same time, an octagonal corona and a long, thin spire were built on the tower. The design was probably inspired by the belfry of Bruges . When the Bruges spire burned down, it left the spire and corona of Methwold unique in the world. English Heritage recently contributed 60% to the cost of extensive repairs to the stonework of the tower, corona and spire.

The church contains many carved works on the stonework and the opinion is that half were carved by a conventional, ecclesiastic carver, the others by an irreverant joker. A lot of fun can be had when studying the carvings carefully.

The tower used to contain six bells, four of which date back to 1630 and the other two from 1778. The tenor bell weighs over 12 cwt. In 1999 these bells and two new ones were rehung and dedicated in time for the Millennium celebrations and are now rung regularly after forty years of silence.

The church clock is a fine example of 17th century workmanship and has an unusual continental style pin-wheel escapement. An interesting feature of the clock is the spring which supports the pendulum — this is an ordinary kitchen knife (complete with handle) which was fitted by Mr Fred Merrick in about 1934 and still works perfectly.

The clock has ticked away contentedly to itself virtually undisturbed for over three hundred years, but sadly in 1999 the clock had its weights and most of its winding gear removed and replaced by two electric motors. In doing this the clock has been robbed of much of its unique character.

In the north aisle is a brass of Sir Adam de Clifton which has a sad history. Legend has it that in 1680 a rogue sexton sold Sir Adam`s brass to a passing tinker. Eventually the tinker was found and the parts of the brass which had not been sold were recovered, only to rest in the parish chest for two centuries. In 1860 the new incumbent John Denny Gedge, with some help, remounted the brass on the wall where he now stands minus various parts.

After many years on the church floor the Bells were re-hung after structural repairs to the tower and in time for the millennium celebrations. We have a dedicated award winning team of ringers.

The church is still in the centre of the village both as an iconic building and place of worship. The regular congregation are very active and the beautiful building is in constant use for both worship and the usual church related activities plus variuos concerts and fund-raising events.. St George’s is in the Diocese of Ely and is one of a group of eight churches, the others being; St Andrew's Barton Bendish, St Mary's Beachamwell with Shingham, All Saints Boughton, St Margaret’s Wereham, St Andrew’s West Dereham, Christ Church Whittington and All Saints Wretton with Stoke Ferry.

The Friends of St. Georges is a group formed to assist and coordinate the upkeep of the church’s structure and look after it’s interests for generations to come.