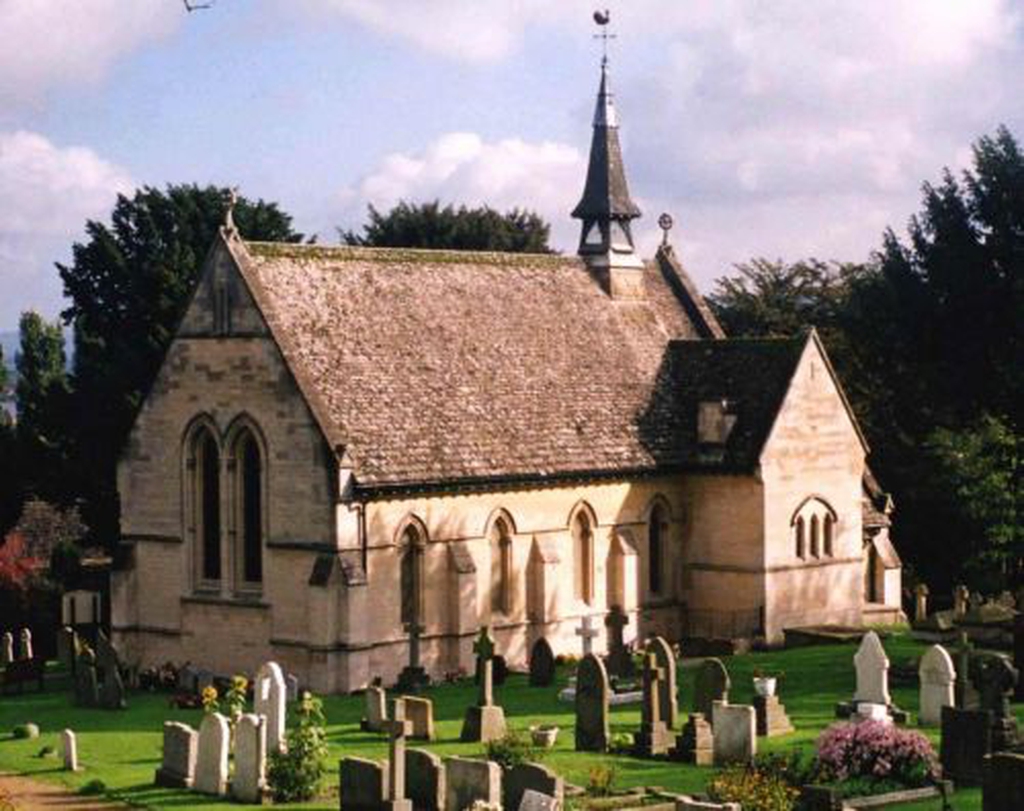 ST KATHARINE’S - YESTERDAY
The Parish before the present church building
The first mention of the church was towards the end of the 1100’s when Abbott Serlo had a pension of 10 shillings from the Chapel at Mattesdune, and Ralph de Mattesdunc gave the church to the Abbey of Gloucester in the time of Abbot William Godemon (1113-30). When Henry VIII dissolved monasteries, he transferred advowson of Matson to the Dean and Chapter of the Cathedral Church of new See of Gloucester - which is still held by them today.

The first church was of oak and elm and the first stone church was built 1224-43.

Matson House was rebuilt by Sir Ambrose Willoughby in 1594 and the baptism of his daughter Elisabeth is recorded in the register for 12th August 1596. In l598, Jasper Selwyn lived in Matson House. August 1643 saw Charles I residing it Matson House as a guest of Jasper’s grandson, William, who, at the age of 19, married a young lady named Margaret Nourse. Margaret’s family were Parliamentarians and as a result the house and lands were saved.

In 1701, Albina Selwyn came to Matson after the death of her husband, General William Selwyn, with her three sons John, Charles and Henry. She presented a lovely silver Chalice and Paten to the church in 1717 and on her death in 1737 she left money which went to rebuild the church, which was in grave danger at that time of falling down! As a result of this timely gift, the church was rebuilt, except for the small chancel, in 1739.

The arrival of the 6 Rice sisters and great, great grand-daughters of Colonel John and Mary Selwyn, was to herald many extensive improvements in the church, and in 1872 a small organ chamber was added to the chancel. However, with the enlargement of the Parish in 1892, the church became too small and, in 1893, the nave and tower were pulled down to be replaced by a larger stone nave with porch, organ chamber and bellcot. The rebuilding was financed principally by Maria Rice in memory of her sister Katharine, whose name suggested the choice of dedication.

The present church of Matson, designed by the late Mr F S Waller Cathedral architect, was built in 1891-4 and dedicated to St Katharine of Alexandria. The dedication of previous churches on the same site is unknown.

The nave, which is 45 ft by 18.5 ft, has a porch on the north side and an organ chamber (with boiler house below) on the south. The style is Early English of the time of Henry III. The nave is divided into five bays, with four lancet windows on either side having single engaged shafts with bases, foliated caps and moulded arches. At the west end, there is a fine two-light window of similar character. A double-moulded string-course, copied from the so-called "Religuary" in the south transept of the Cathedral, follows the course of the windows and doorway and is carried round the church inside and outside, adding greatly to its beauty.

An Early English arch divides the nave from the chancel. This is comparatively plain, but it is proposed to make it more ornate by inserting a rich moulding resting on foliate brackets.

The floor is composed of locks of walnut and oak, laid down in alternate squares. This is far preferable to encaustic tiling, as the footsteps of the worshippers on entering and leaving the church are unheard. The benches arc made of pitch-pine with exquisite graining, and have oak roses inserted in the ends. The carved ‘font has an octagonal shaft and bowl.

The roof is divided into five bays by four principal trusses which have projecting brackets beneath them carried by stone corbels. These corbels are very graceful, and harmonise well with the Early English carving, though they may have been purposely designed in a more classic style so that the archaeologist of the distant future should have no excuse for being deceived as to the true date of the church. Beneath the principal trusses are curved braces. In the eastern compartment these traces are ornamented with cusped work, and the ceiling is panelled. This was a favourite method with Mr Wailer of adding dignity and richness to that part of the nave which is nearest the chancel.

The other compartments of the roof are quite open, showing the rafters purlins and braces. The whole construction of the roof is very effective and has been justifiably much-admired. The porch has three trefoil windows on either side containing rich ruby glass, some of which is said to have come from Cologne cathedral. The glazing of these windows was done by Mr C H Dancey as a gift to the new church. In the porch are preserved some relics of the Georgian church: three stones carved with the Selwyn crest - two lions’ jambs holding a torch fired, and a cherub’s head. There is also an inscription recording the rebuilding of the nave in 1893-4.

The chancel is much plainer than the nave, and is rather short and narrow. The vestry contains an escutcheon of George IV, formerly over the doorway of the nave, bearing quarterly the arms of England, Scotland and Ireland, and overall on a shield of pretence the arms of his German dominions ensigned with the Royal Crown of Hanover.

The Royal arms, after the Reformation, superseded the rood above the chancel screen and arch. They were set up as early as the reign of Henry VIII, and were made compulsory in 1660. Wherever they still exist they should be carefully preserved as symbols of loyalty to the Crown and as historically interesting, but the vestry may be a more suitable place for them than the entrance to the sanctuary.

The west window has been filled with glass designed and made by Mr Hugh Arnold, of 63 Bedford Gardens. Kensington, a pupil of Mr Whall, who made the new windows in the Lady Chapel of the Cathedral. One light, which was given by the Rector in grateful memory of the Hons K S and M E Rice, contains a beautiful figure of St Hilda, Abbess of Whitby who died in 680AD. Above her are the arms of Northumbria, similar to those on Osric’s tomb in the Cathedral: azure, a cross between four lions rampant. A vignette below represents her as bidding God-speed to her pupil, Tatfrid, who has been called to be the first Bishop of the people who dwelt in the lower Severn Vale.

As three of her pupils in succession – Tatfrid, Bosel, and Oftfor - were elected to the See of Worcester (Hwiccorum Castra), we honour her at Matson as being together with Osric one of the founders of Gloucestershire Christianity. The other light, given by the Rector, his brother and sister, in memory of their mother, Caroline Beazley, and their aunt, Sophia Morgan, contains a figure of St Ia (a disciple of St Patrick) who crossed over from Ireland to Cornwall to re-convert the half-heathen inhabitants. Above the saint are the arms of Cornwall (azure. 5 bezants, 5, 4, 3, 2 and 1) and the vignette below pictures her as landing from her vessel at Port Ia (St Ives) and being received by Dinas, the lord of those parts. She is said to have suffered martyrdom: hence the palm branch and sword which she holds in her hands.

The artist has inserted in St Hilda’s light an ammonite in reference to the belief of the Northumbrians, who adored her, that the fossils they found in the form of snakes coiled up were venomous reptiles who had been thus changed by her prayers. In St Ia’s, he has similarly placed an ivy leaf, the symbol of this Cornish saint (the arms of St Ives and an ivy branch). This is supposed to refer to a frail coracle on which she made her voyage across St George’s Channel. There is no crocketed tabernacle work such as is found in 14th and 15th Century glass, and in poor imitations of it made in recent times. The transparent quarries are decorated with the monograms of the two saints, copied from originals in the Rector’s possession. The carved inscription and heraldic lozenges are the work of Mr H Frith of Gloucester. The wall painting of the Annunciation of the Blessed Virgin Mary is by Mr Arnold.

The porch has a fine early English arch of two orders. On its north face in a tabernacled niche is a graceful figure, carved by Mr W S Frith of Chelsea, of St Katharine, who holds a sword and rests on a broken wheel, the symbol of her martyrdom. On either side is some excellent carving in low relief with two shields, one bearing the letter S, a palm branch and celestial crown, for St Katharine was a Princess as well as a saint and martyr.

Below the west window, outside, on the dedication stone are S K 1893 and St Katharine’s Wheel. The roof is high pitched and covered with stone tiles. Toward the eastern end rises a campanile in which hangs Rudhall’s bell of 1719. There are finial crosses at the extremities of the roof and on the gable of the porch.

The churchyard, which excels in rustic beauty and solemn peacefulness more than any other in this neighbourhood, contains many beautiful Celtic crosses, many of which were designed or copied from Cornish and Scots originals by the Rector, and sculpted by Mr Frith and others. The six crosses side by side at the east end of the chancel - commemorating the Misses Rice, the Isle of Arran and Iona crosses over Mrs C Bazeley and Mrs Ponting’s graves, and the crosses in memory of Mrs and Miss Bruton - are especially worthy of notice.

There are some fine yews, descendants of the trees planted here in the middle-ages to provide long-bows for the yeomen of Matson, who fought and won at Crecy, Poitiers and Agincourt. There is a magnificent hornbeam at the west end of the church and, inserted in the west wall of the churchyard or leaning against it, are fragments of tombs and carved stonework.
It is the earnest desire of the Rector and churchwardens to keep the sacred precincts of the church in perfect order, and prevent any approach to desecration. The parishioners respond gladly to this wish, and take delight in decking the graves with fresh flowers, symbols of the future resurrection of those whom for a while they have lost.