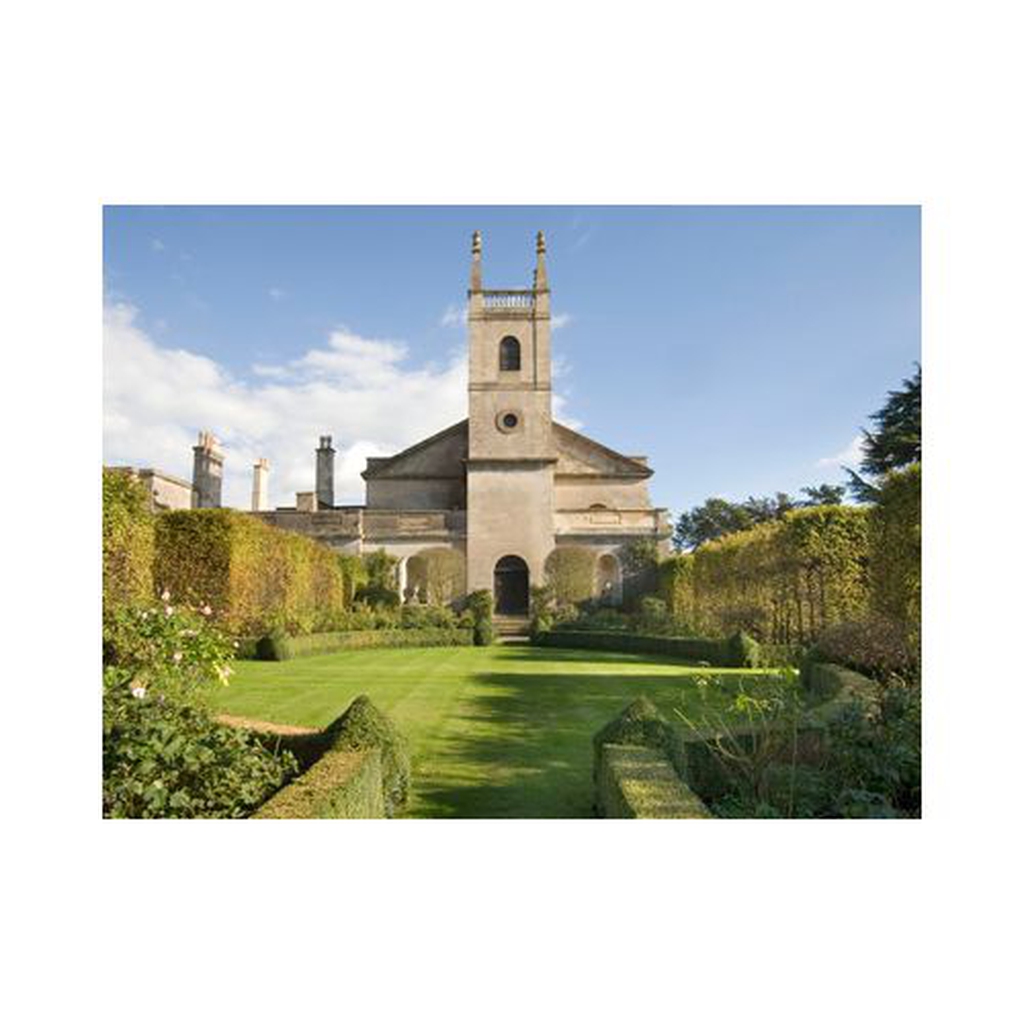 The Church of St. Michael and All Angels, Great Badminton is attached to the seat of the Dukes of Beaufort, Badminton House. It was built in 1785 by Charles Evans, (or perhaps according to Mrs Eileen Harris, by Thomas Wright) in the style of St. Martin-in-the-Fields in miniature, but with a plain West tower.

The medieval church which was then demolished lay slightly further to the West. The nave has a tunnel-vault with ornamental panelled plasterwork and Classical four-bay arcades and aisles with four small saucer domes. The chancel and apse were added in 1875 to accommodate the enormous monument by Grinling Gibbons which was moved here from St George's Chapel, Windsor.

THE PULPIT and BOX PEWS are of the original date.

THE ORGAN CASE, CHOIR STALLS, REREDOS, and COMMUNION RAIL are by Temple Moore, 1908.

STAINED GLASS: The eight windows for the aisles, four on each side, have stained glass of 1846-7 by Thomas Willement, with heraldic designs, blue borders, and badges in the yellow of the Beaufort livery.

1. The Grinling Gibbons monument on the North side of the chancel consists of an effigy of the first Duke of Beaufort (d.1700), in Garter robes, reclining on a sarcophagus and a plinth with relief of St George and the Dragon. There are twin Corinthian columns with embossed shafts, acanthus frieze, cornice with flaming urns, and the Duke's arms and supporters. At the top, 25 ft from the ground, is a tasseled cushion supporting a coronet; on the plinth are full-length female figures of Justice and Truth. Above the Duke's effigy, parted curtains show the heavenly host with palms and crowns. The Latin inscription displays the names of his family and his many high offices.

2. At the East end of North aisle there is a splendid monument by Rysbrack, signed and dated 1754. The second and third Dukes are in Roman costume, one standing, the other seated on the sarcophagus holding a medallion. Glorious, totally asymmetrical drapery hangs down over the sarcophagus.

We do not hold regular services at Great Badminton, there being on average 6 services a year in the church; our regular Sunday services are normally held at the nearby Little Badminton. Please see the Services page of our website for details of all forthcoming services.

Great Badminton is normally closed to the public, except on days of services, due its location in the private grounds of Badminton House. However, tours can be arranged for groups of a minimum of 10 people (individual tours can unfortunately not be offered). The cost will be £5.00 per person. For further information, please contact Mrs Sheilah Michael at [email protected].