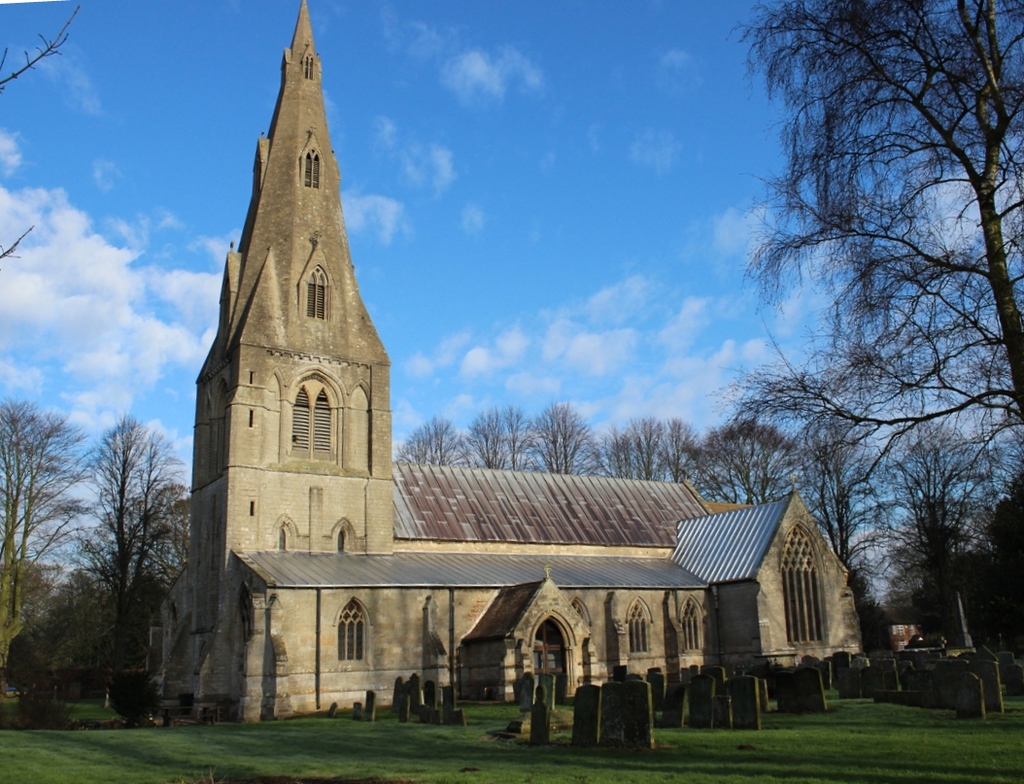 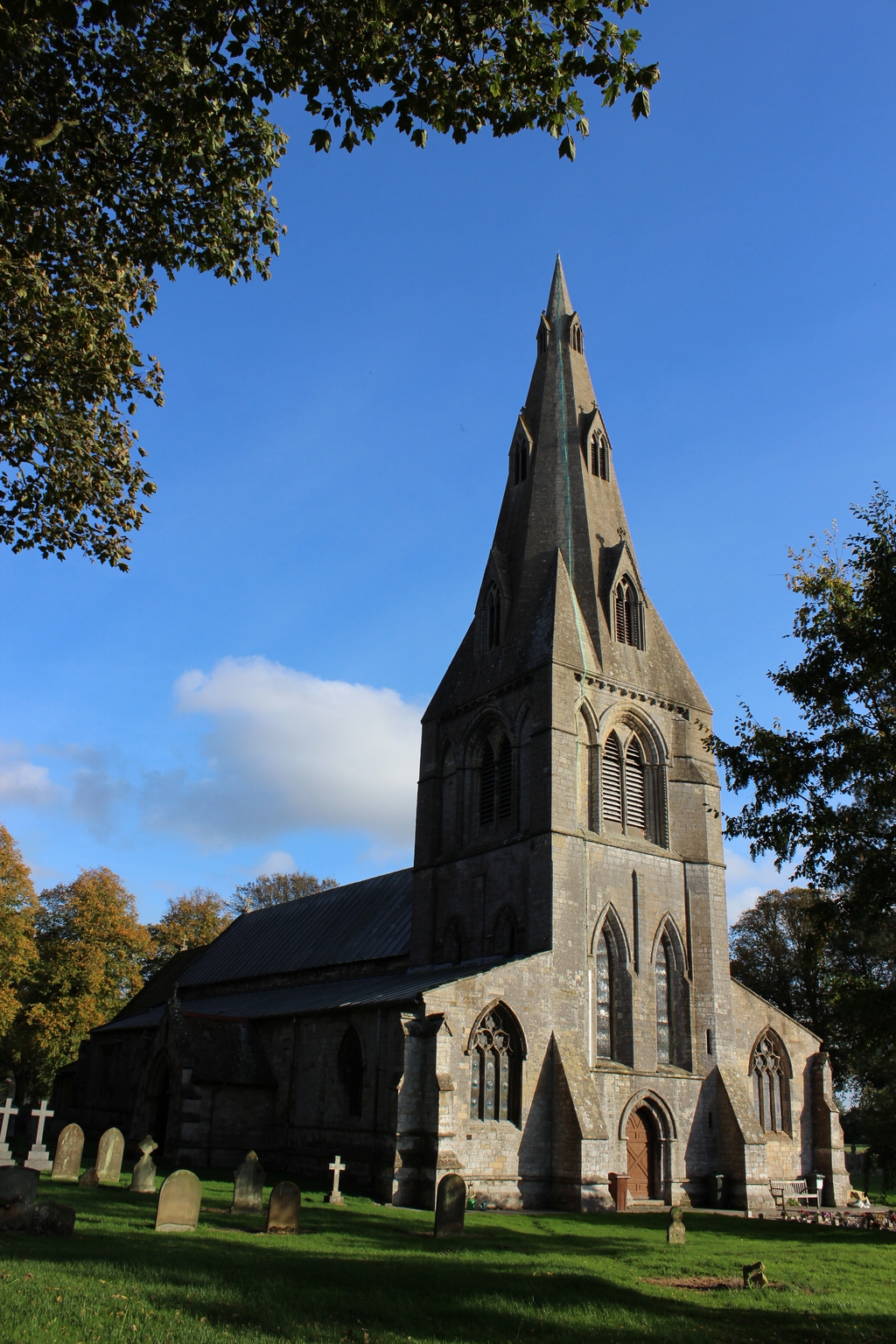 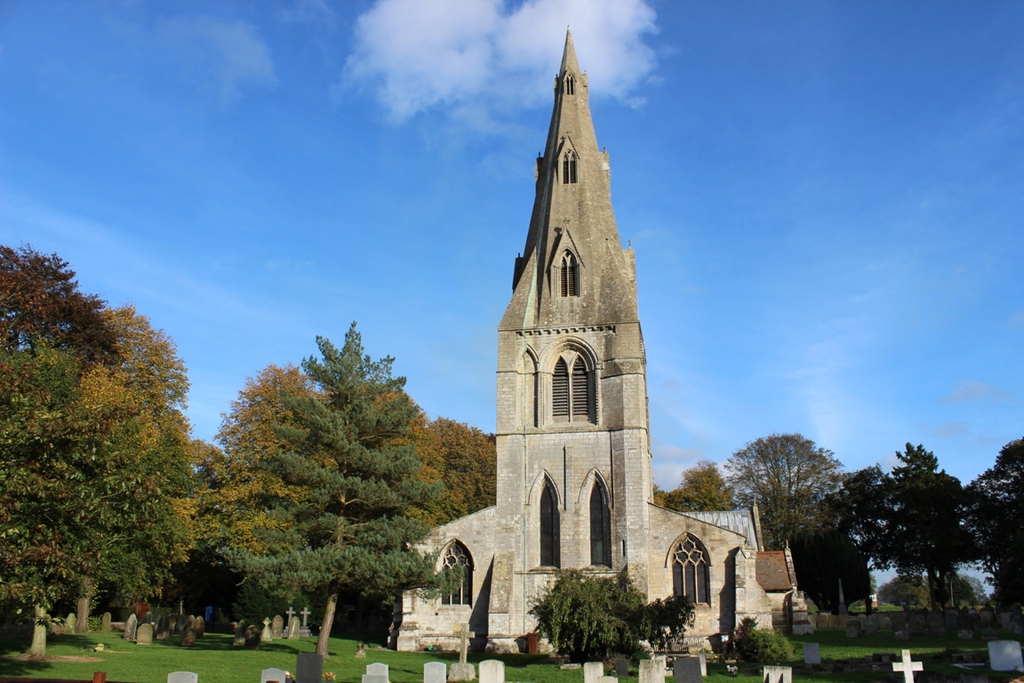 The Domesday Survey lists a church and a priest here in Frampton in 1086 AD. It is thought that this earliest recorded church would have been wooden, and that it was soon replaced by a Norman stone-built church of which the present Font Bowl and the hidden foundations which support the present pillars of the Nave are the only remains.  The remainder of this 12th century church was pulled down about 1350 and the present church was built. This comprised the Nave, Aisles and South Transept, as remaining today. Major restoration work was carried out in 1889. The Church Organ was installed in 1909 and restored in 1981. The Nave and Aisles were re-roofed in 1930.

Originally there was also a North Transept and a Rood Loft. Missing portions of the moulding and the high doorway in the Chancel arch show where the Rood Loft was accommodated. On the south side of the arch under the small window which houses the oldest stained glass in the church is an opening thought to have housed a Piscina, which would indicate the presence at some time of an altar on the rood loft.

The Chancel of the 14th century church was no longer than at present. At some time between 1750 and 1850 the east end of the Chancel was demolished and one of the side windows used to provide the present east window. The stone carving around the doors and recesses in the Chancel is good, although suffering from ageing. It is interesting to note the measures taken in the south east corner to preserve one recess of the Sedilia with its carving. The recess on the north side of the Chancel is thought to have housed the tomb of the founder.

During the same period the North Transept was demolished and the arches which spanned the east end of each aisle were removed because they were causing the pillars to lean.   The Screen, said to be 15th century, is believed to be part of the screen which at one time divided the Nave from the transept crossing. Recesses in the Nave pillars show where this was fixed.

The Pulpit is of oak and dates from the mid 17th century. It was purchased from Bourne Abbey for £3-3-0 after a fire there and installed in its present position in 1891.

In the South Transept is a monumental effigy, much damaged and of unknown origin; it is thought from details of the costume to date from about 1300. `White's Lincolnshire' records that the lady is Johanna de Huntingford, a patron of the church in 1275, but this cannot be confirmed. Also in the South Transept can be seen the Mensa or stone top of a medieval altar, now set in the floor as the base of an altar table. The floor tiles in the Lady Chapel are of medieval origin.

Below the plaques of 'THE TEN COMMANDMENTS' are two stone tablets, which were originally sited at the front of the former Frampton Church of England School, which was sold in 1997 and demolished in Spring 1998. The school closed in July 1968. A semi-circular stone bears the inscription:

Another tablet is in the form of a Sundial and bears the words:

In the South Aisle, note the centre window depicting St. Mary, Patron Saint of this church; St. Hugh, Bishop of Lincoln, with his swan and holding a model of his Cathedral Church, and St. Botolph with a model of Boston Parish Church (The Stump) at his feet.   By an old doorway arch, now occupied by the church heating panel, there is a fine oak medieval Vestry Chest, with hasps for three padlocks. This chest was cleaned and restored by members of Frampton W.I. as their contribution to the European Heritage Year.

The fine Chandelier hanging in the nave holds 25 oil candles and is in regular use on festive and other important occasions. The quaint inscription on the boss proclaims it to be the gift of Coney Tunnard Gent in 1722. The rabbit surmounting the boss is no doubt a visual pun on the name Coney.  The Tower houses a peal of six bells - the earliest dated 1602. The blocked elevated doorway in the south-west corner of the tower gave access to a ringing chamber floor at that level at some earlier period.  The modern stone altar in the South Transept was erected in 1955, as a memorial to the Dennis family.

Improvements to the facilities in St. Mary's were made in the latter part of the 20th century, with the addition of a gas fired warm air heating system, replacement carpeting for the Chancel and Nave, and a kitchen and toilet.  The bell ropes were replaced in 1999.

In 2009 the church was re-wired and a new lighting scheme was installed. It was dedicated on 30th August 2009 by the Bishop of Lincoln, The Rt. Revd. Dr. John Saxbee.

In November 2013, the church audio sound system and induction loop was updated.

This ancient parish church clearly shows the loving care of successive generations, and is still used for the purpose for which it was built - as a place where Christians can join together for worship and share fellowship with other members of the church and community.