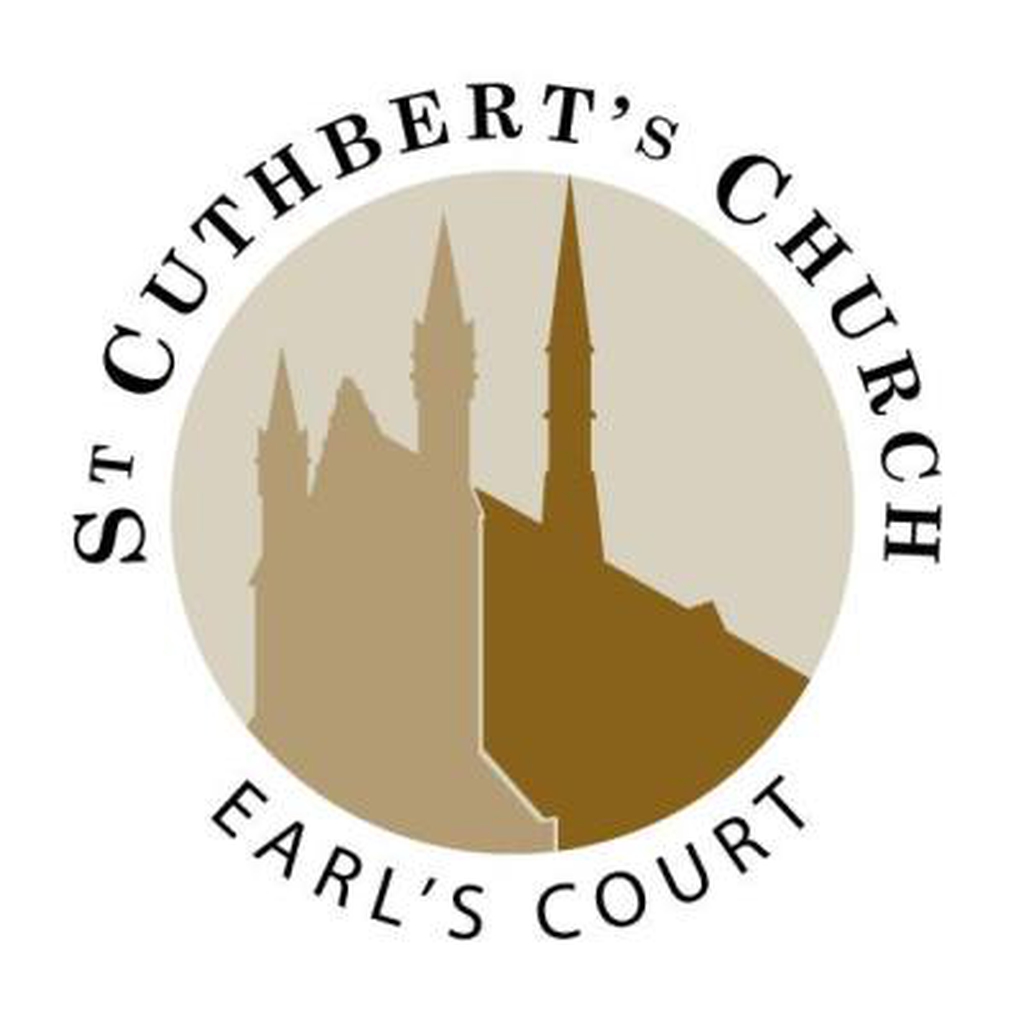 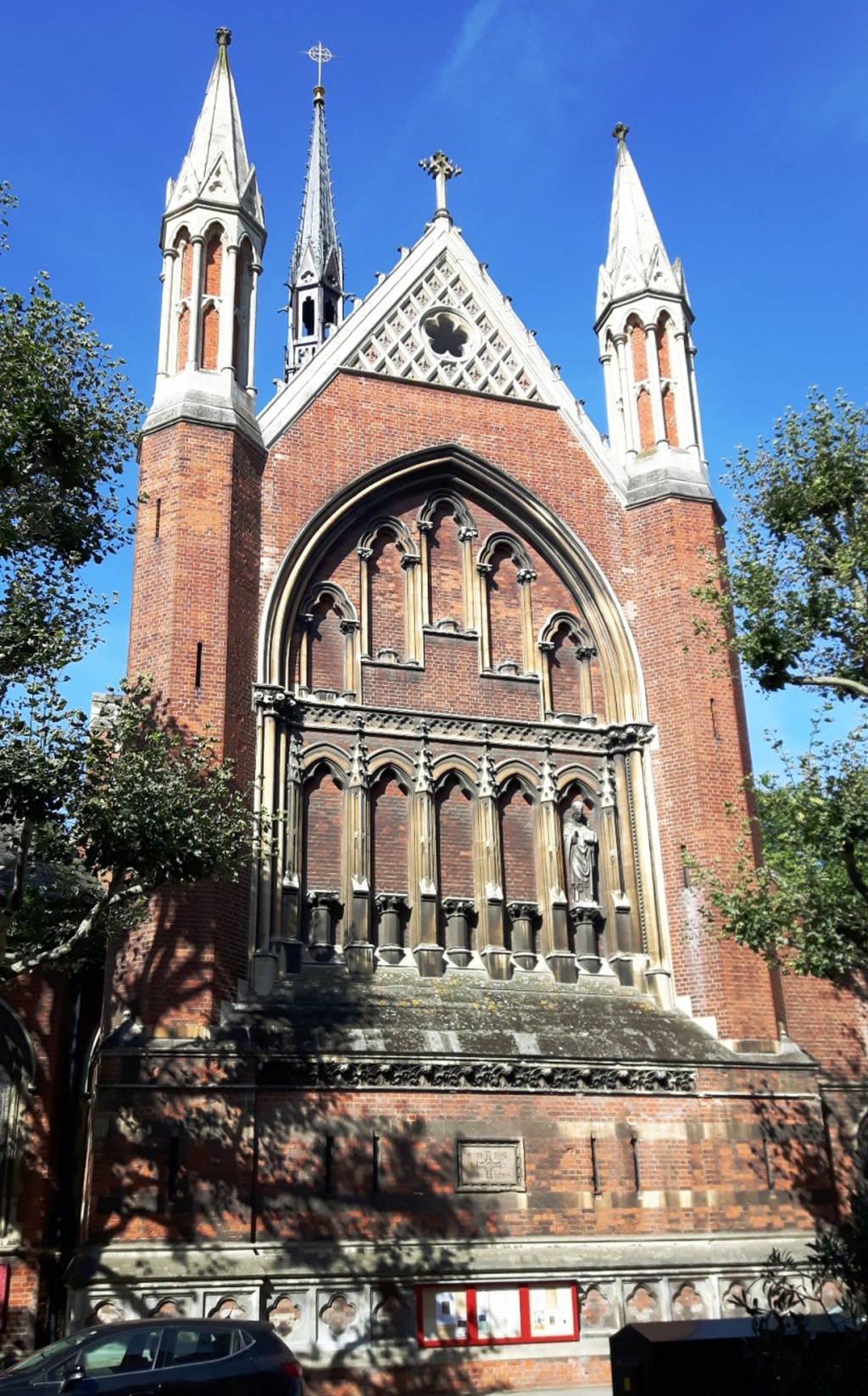 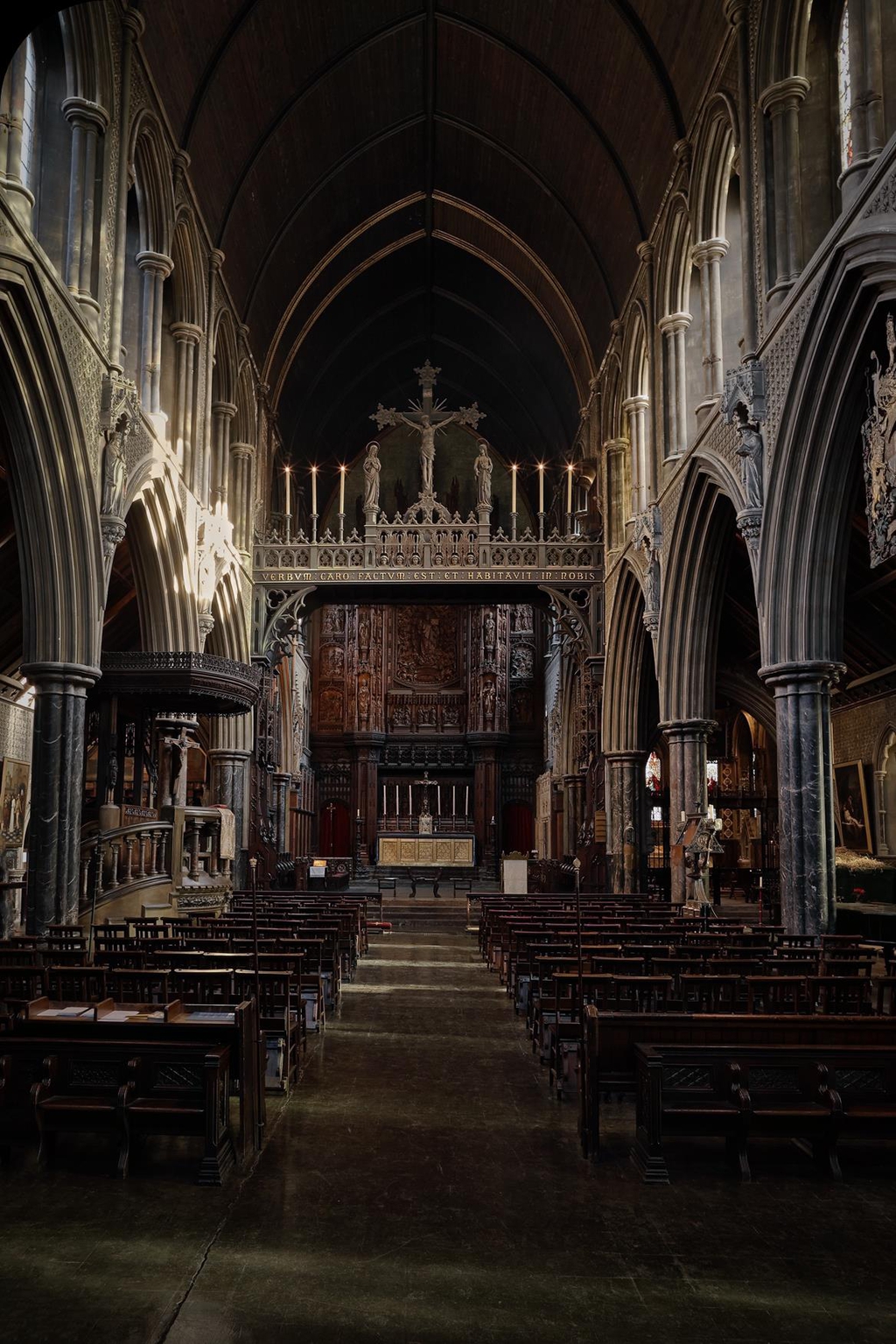 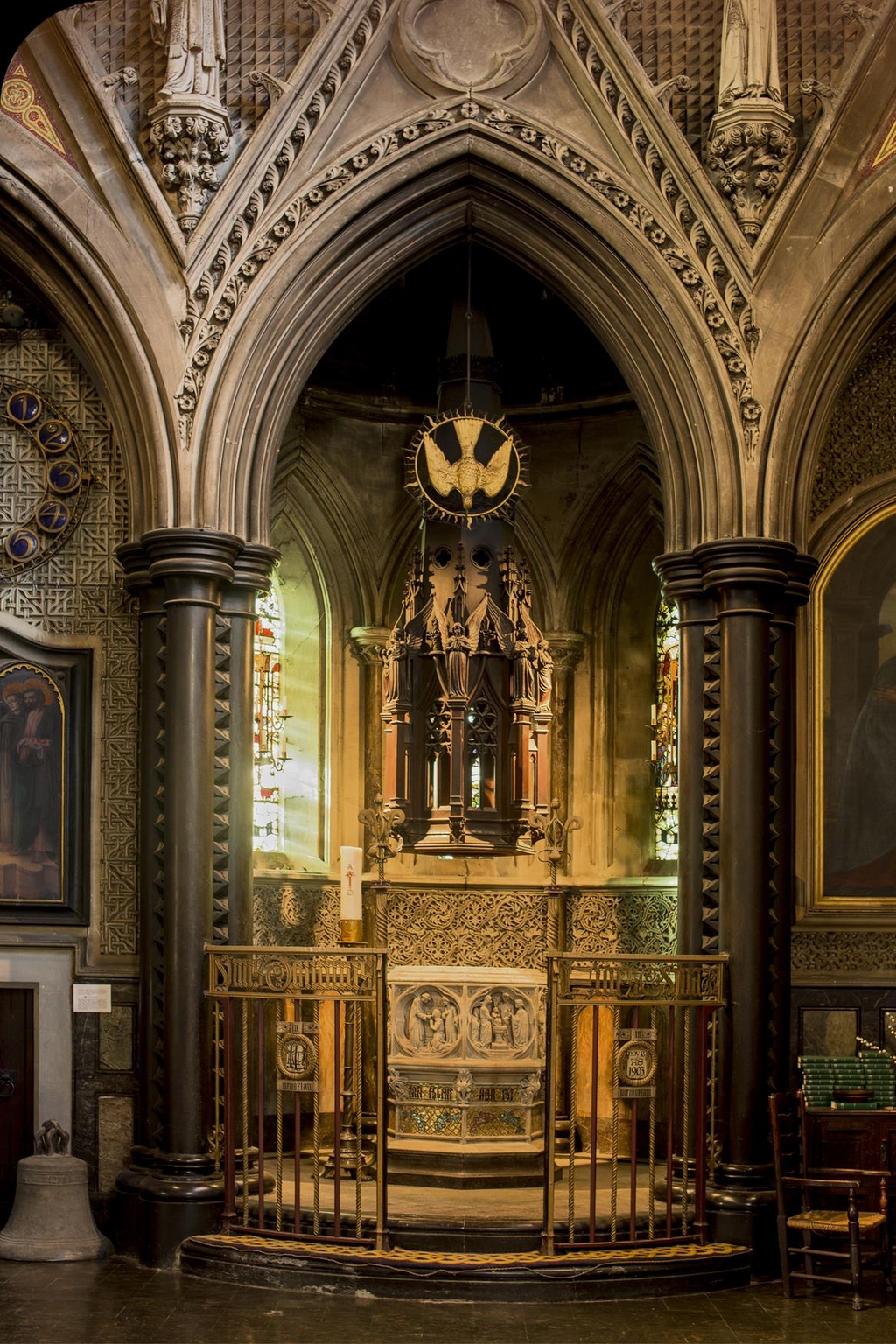 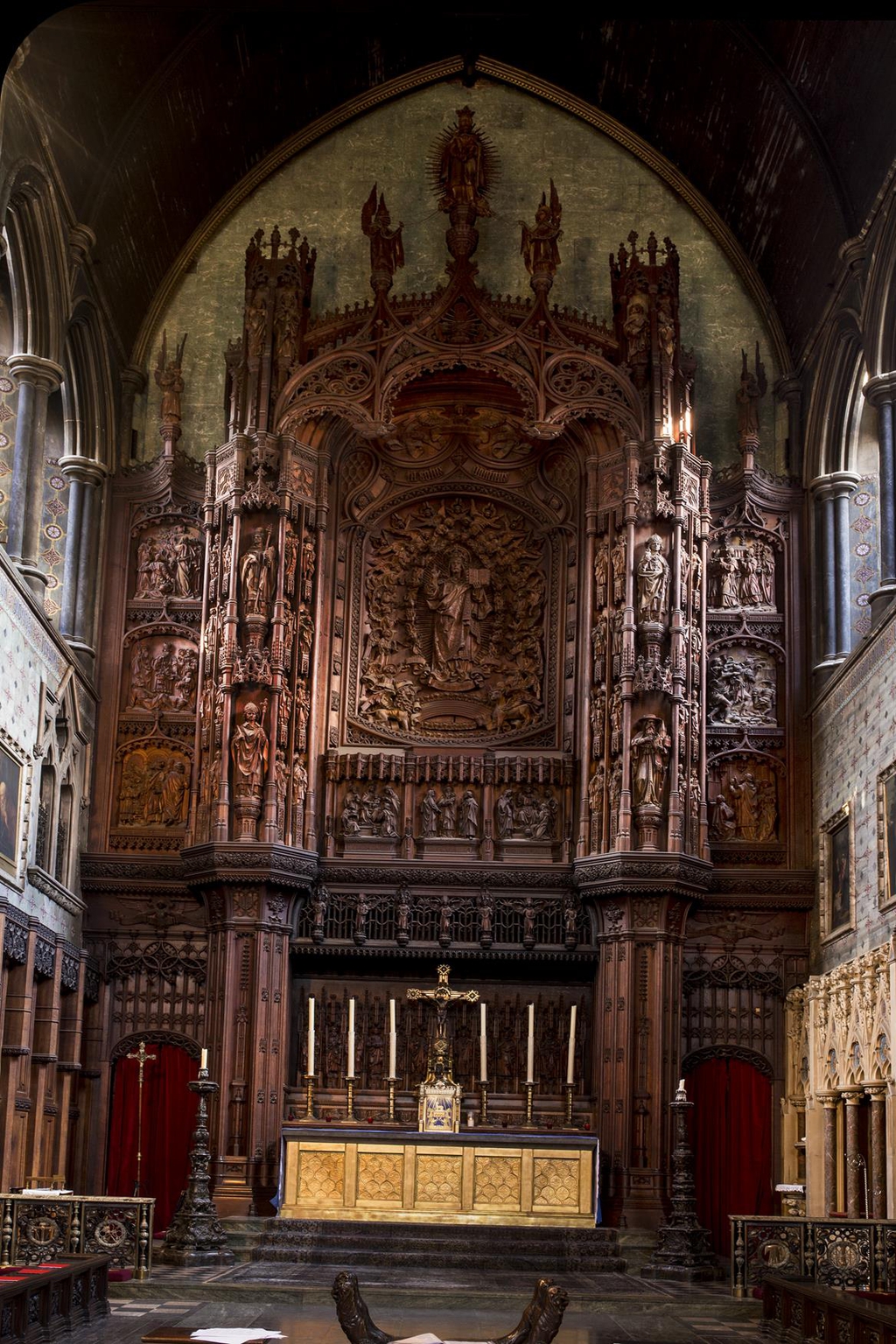 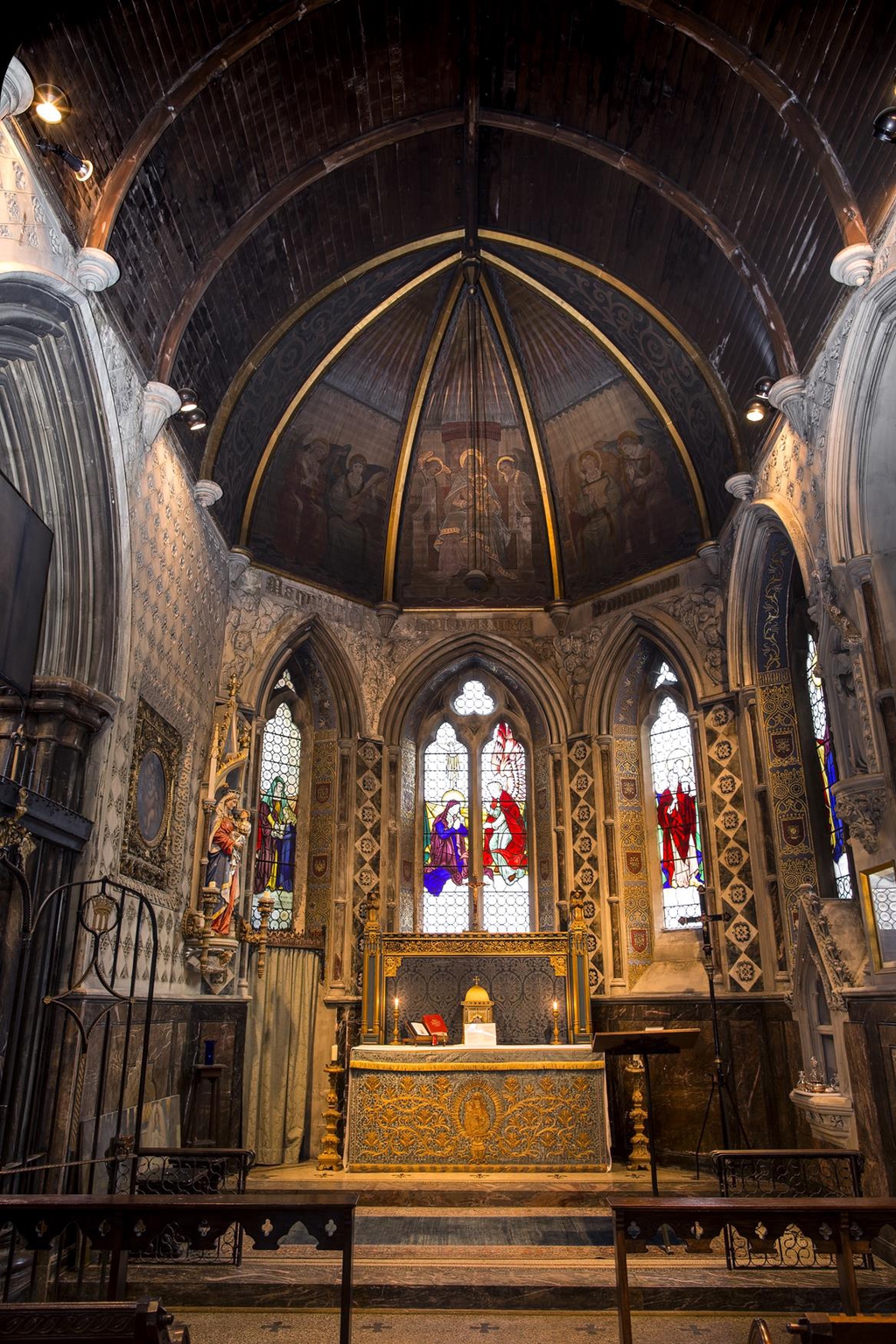 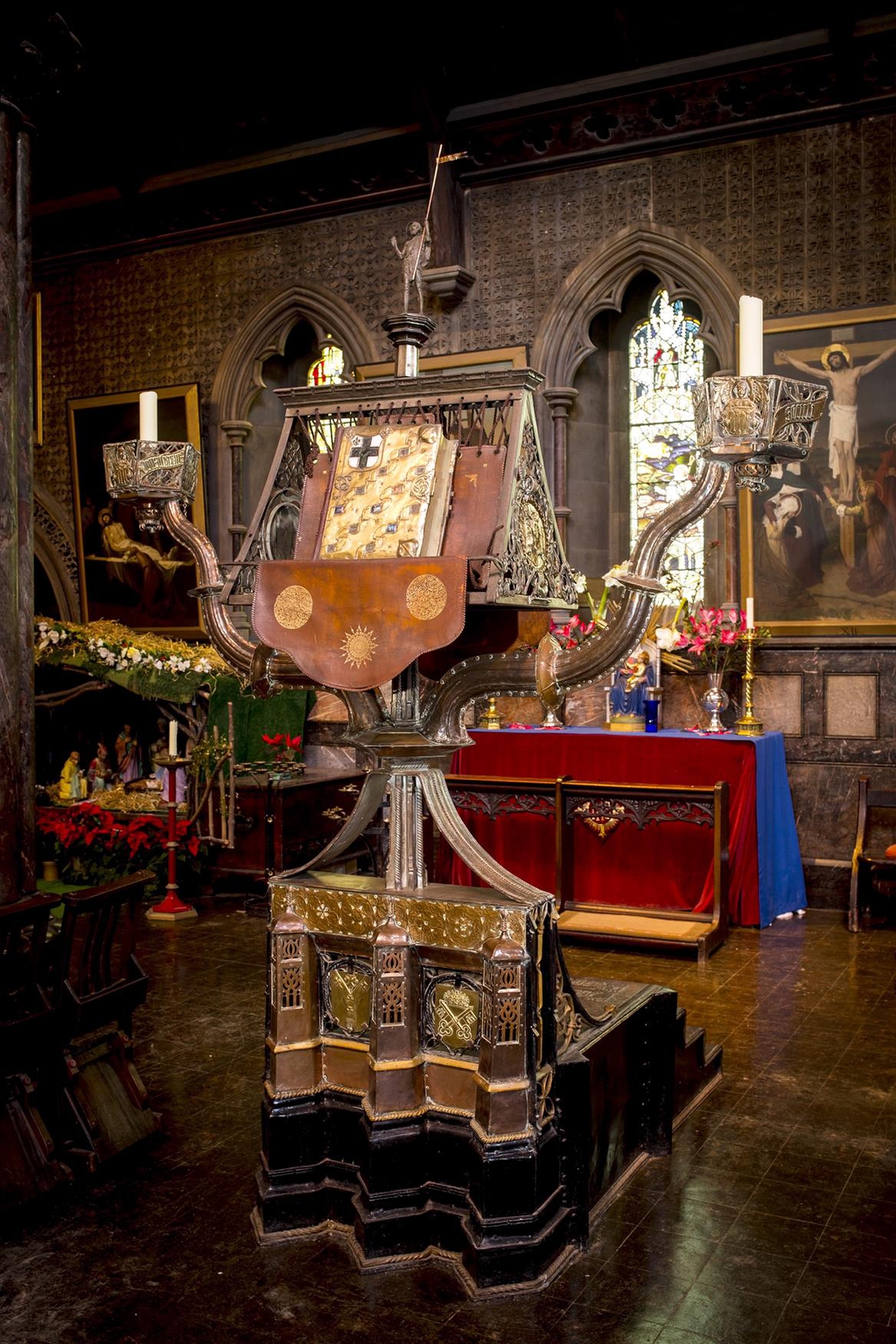 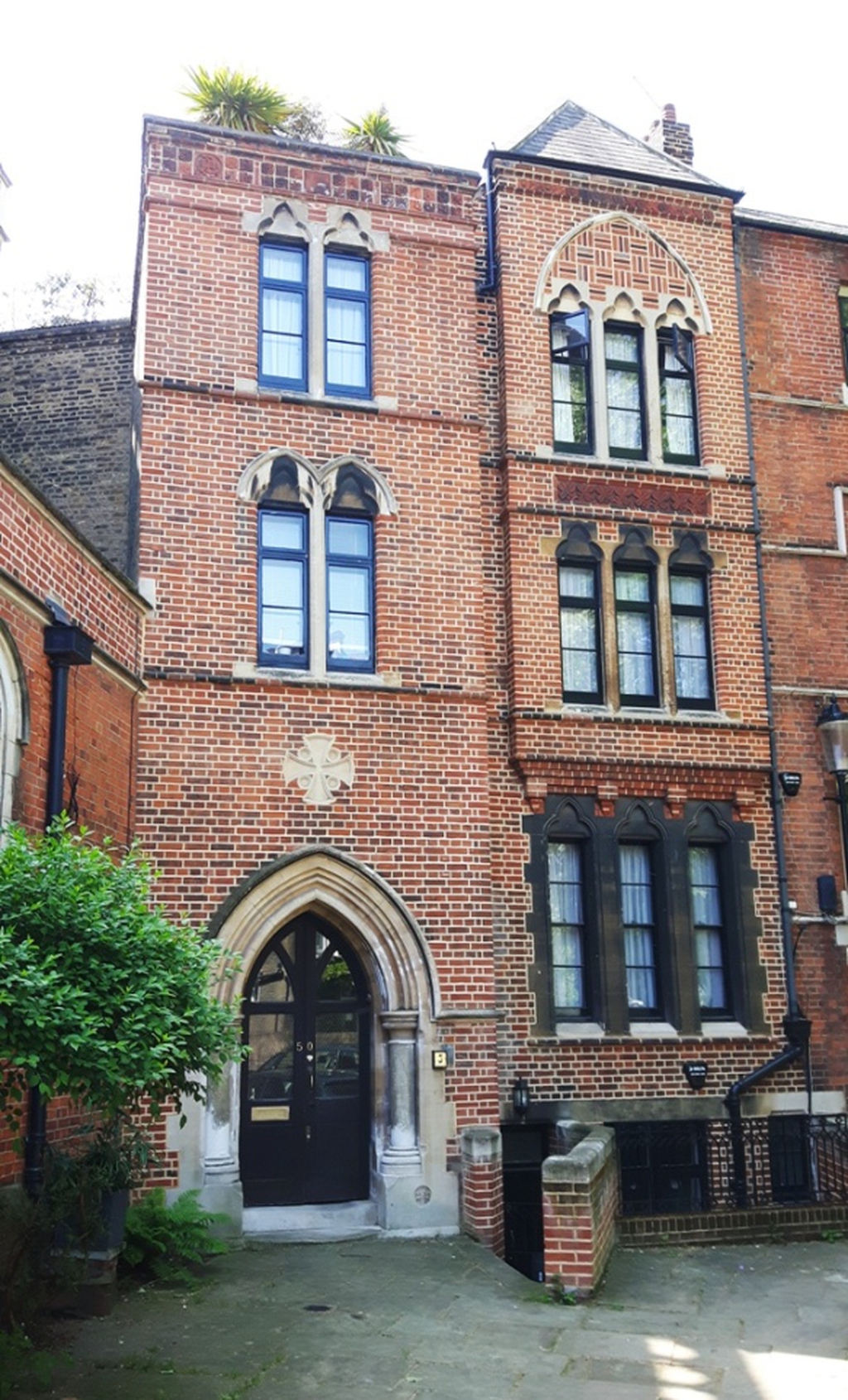 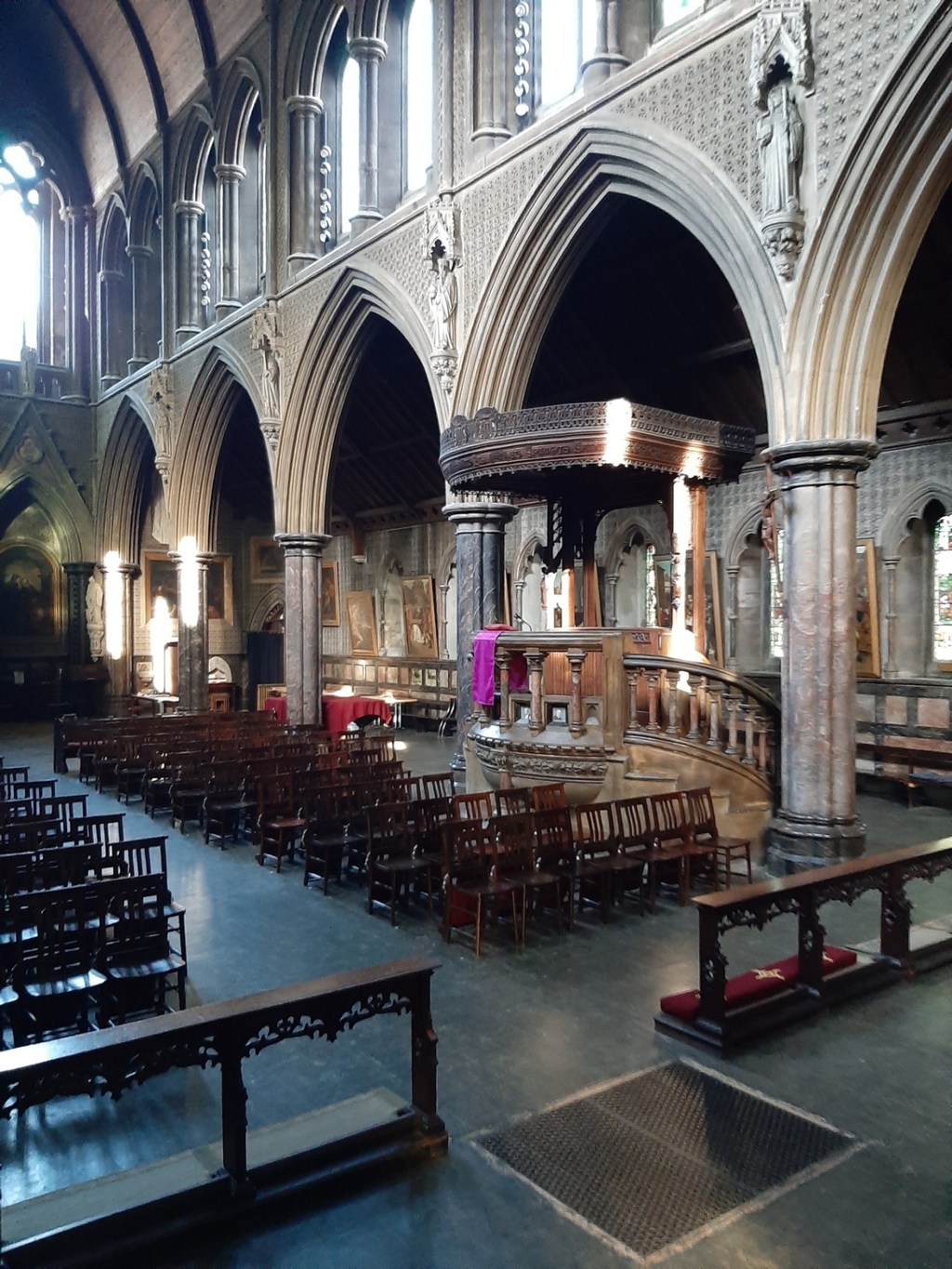 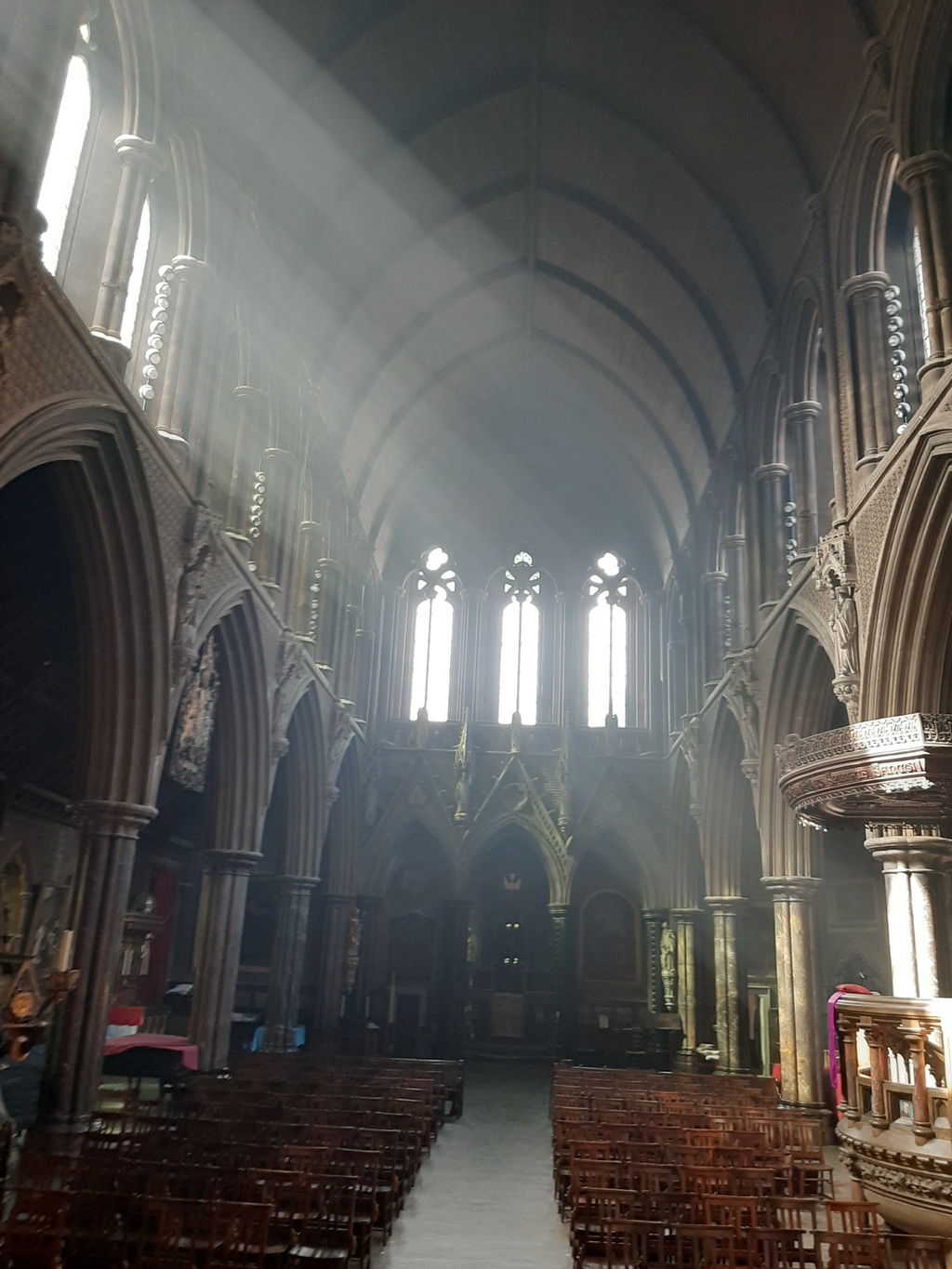 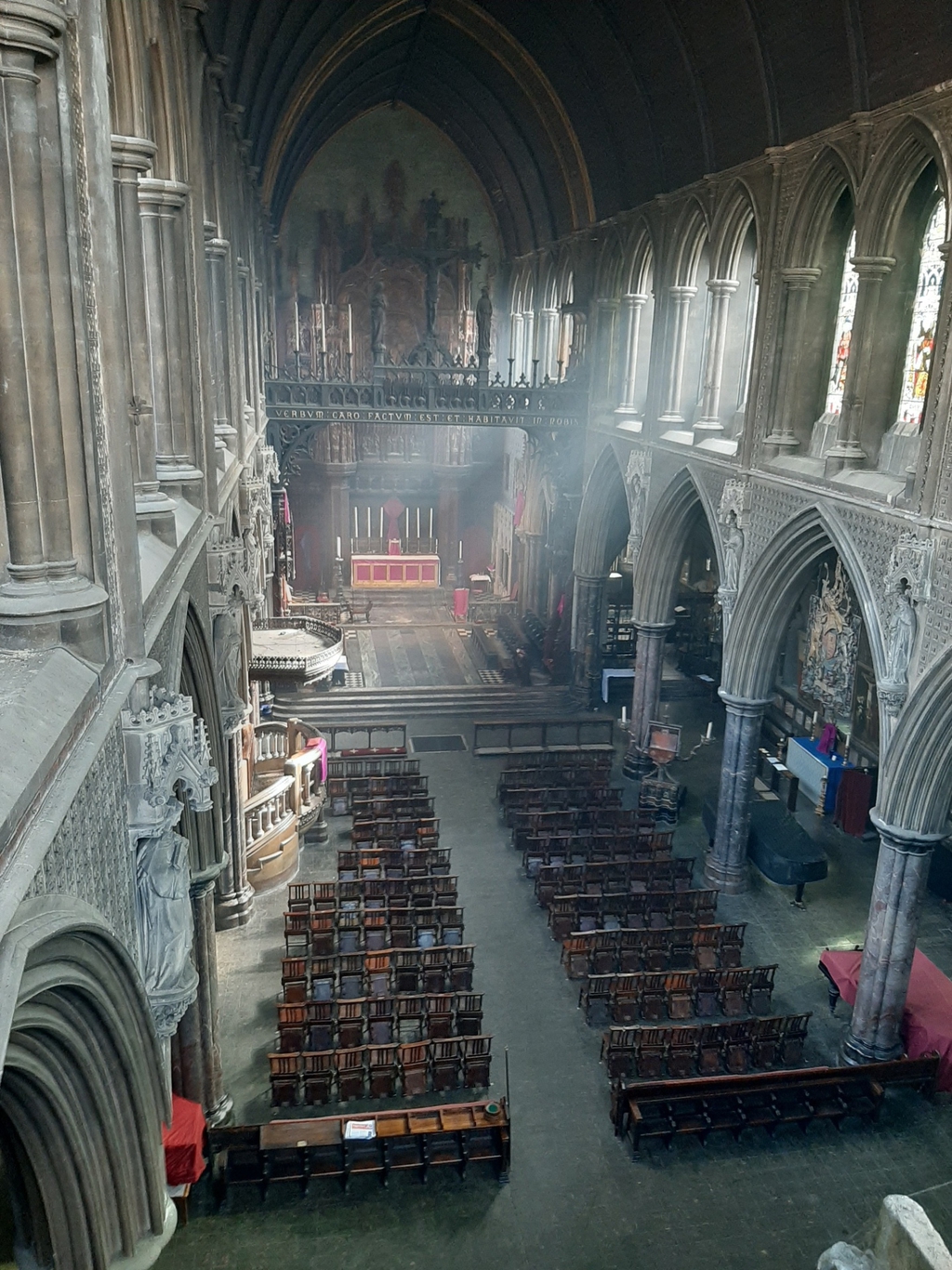 Our toilets are located in the crypt, accessible via a staircase.

St Cuthbert’s is one of London’s largest and finest 19th century churches, it rises dramatically amongst the Victorian terraces of Philbeach Gardens, forming a group with the adjacent clergy house and Philbeach Hall.

The church was constructed between 1884 and 1887 to designs by the architect Hugh Roumieu Gough. Built of brick, with stone dressings, it is in a style which recalls the monastic churches of the Middle Ages.

The church suffered damage from Second World War bombs, which blew off the roof. It was re-clad in copper sheets after the war. The failure of this material led to w
ater penetrating the interior, putting the building very much at risk. During the 1990s the church was re-roofed using Westmorland slates.

The interior of St Cuthbert’s reflects a process of enrichment which extended into the inter war years and was overseen by the first vicar, Henry Westall, who was in office from 1883 to 1924. The church was designed as a container for rich fittings. Some of these were the work of HR Gough, including the enormous pulpit and rood loft.

Much of the interior decoration, carving in stone and wood, mosaic work and embroidery, was undertaken by craft guilds formed by parishioners in which women played a leading role. Stained glass by Kempe and Tute further enriched the interior (though some was lost in World War II).

The most dramatic of all the furnishings is the enormous reredos, inspired by Spanish precedents, and designed by the priest architect Ernest Geldart. Designed in 1899, it was finally installed in 1914. St Cuthbert’s significance as an Arts & Crafts shrine is largely due to the work done there by William Bainbridge Reynolds between the 1890s and 1930s. One of the most talented metalwork designers of the period, Reynolds was responsible for the extraordinary clock at the west end of the nave, the screens to the side chapels and baptistery, the altar rails, Paschal candlestick, the Royal Arms and much else. He made the tabernacle on the high altar in 1933, two years before his death. The most famous of his works in the church is the massive lectern (1897). John Betjeman, who greatly loved St Cuthbert’s, described its style as 'Nouveau Viking'.

We host regular concerts and events in church that are advertised on our website. Additionally, St Cuthbert’s frequently liaises with orchestras, notably the Academy of St Mary-le-Bow, for liturgical orchestral masses and evensongs throughout the year.

The Church has a fine 4 Manual, Alfred Hunter Organ installed in 1900 which has been played by many famous Organists. In 2003 the Console was totally refurbished with Solid State Technology and a Piston Capture system being installed. It is hoped that we can raise sufficient funds in due course for a complete overhaul of the instrument. If you would like to contribute to the restoration of this beautiful instrument, then please be in touch with the Director of Music

St Cuthbert’s has maintained a high standard of music making since the beginning of the 20th Century. Under incumbent Director of Music Quintin Beer, and Organist Seb Gillot, both the liturgical music programme and externally organised events continue to flourish. The church maintains a professional quartet of singers, all of whom are distinguished musicians in their own fields. The choir’s repertoire ranges from sixteenth-century polyphony to more contemporary music and it regularly premieres new works.

There are plenty of opportunities for professional singers at St Cuthbert’s Church. The Director of Music is always happy to hear from singers who are interested in joining the deputy list. Please be in touch with him directly ([email protected]) to arrange an audition.

St Cuthbert’s frequently liaises with orchestras, notably the Academy of St Mary-le-Bow, for liturgical orchestral masses and evensongs throughout the year. Additionally, the church maintains a monthly voluntary Evensong choir, The Saint Matthias Singers. For more information about joining the choir, visit our website.

Tours can be arranged in advance by contacting us.

Details of our recently reprinted guidebook appear on our website.