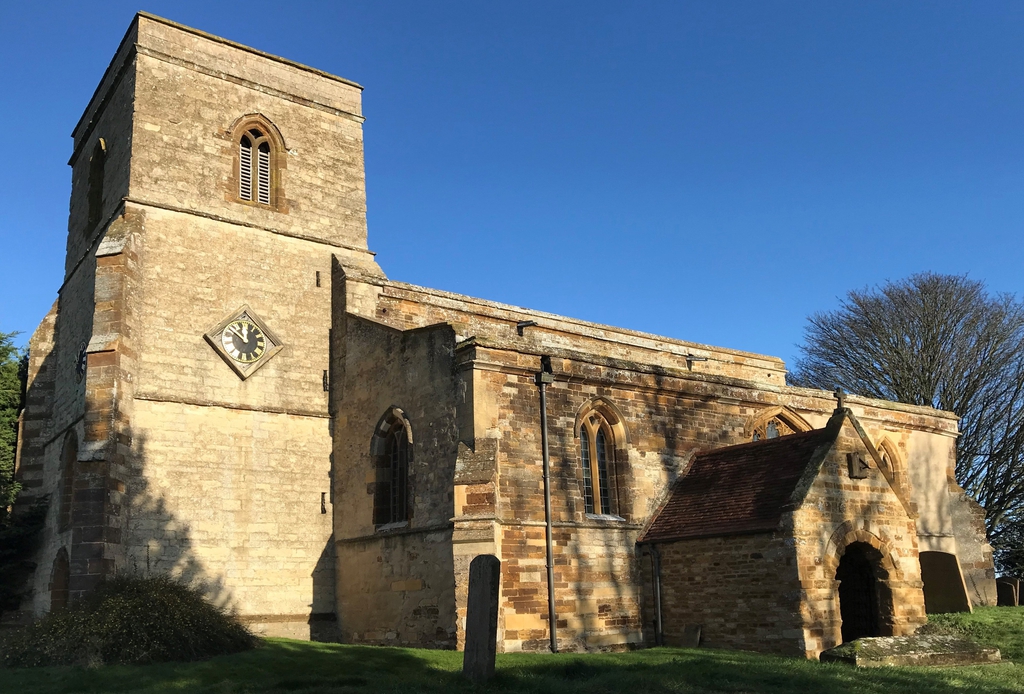 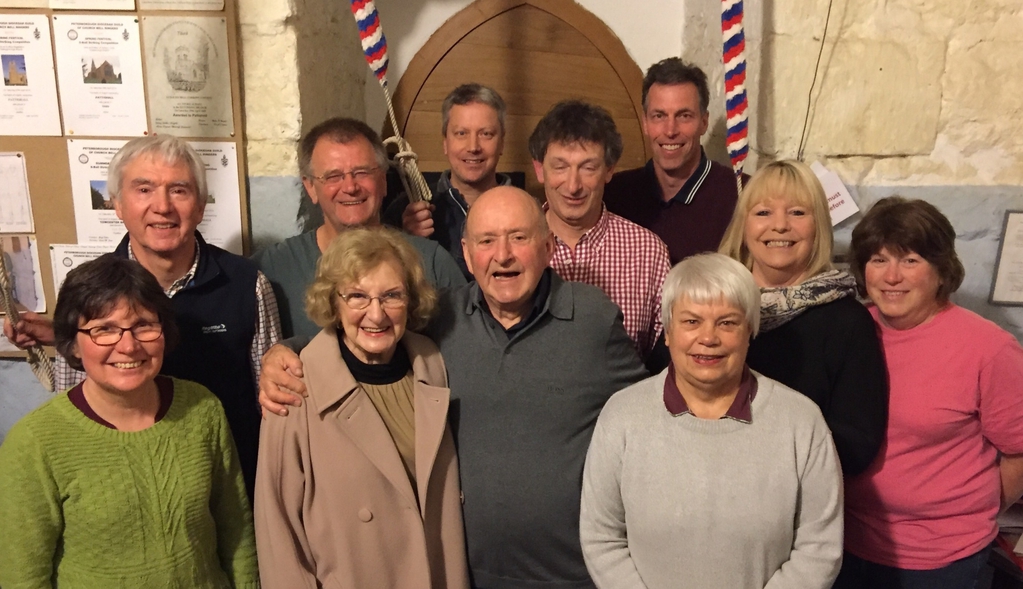 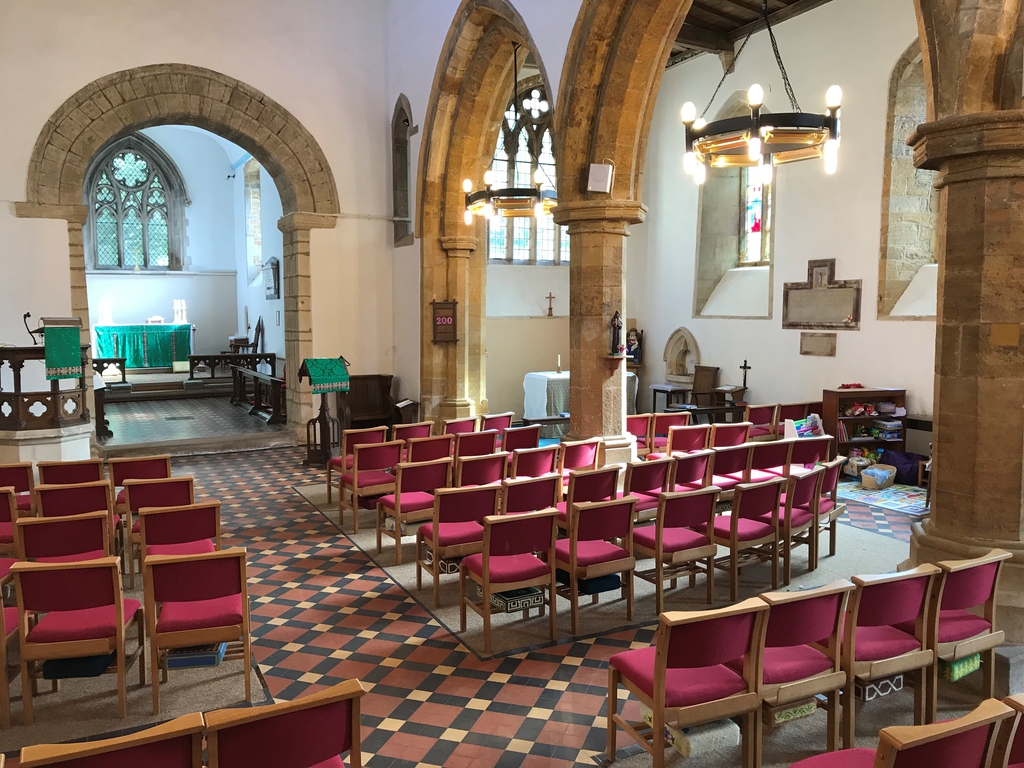 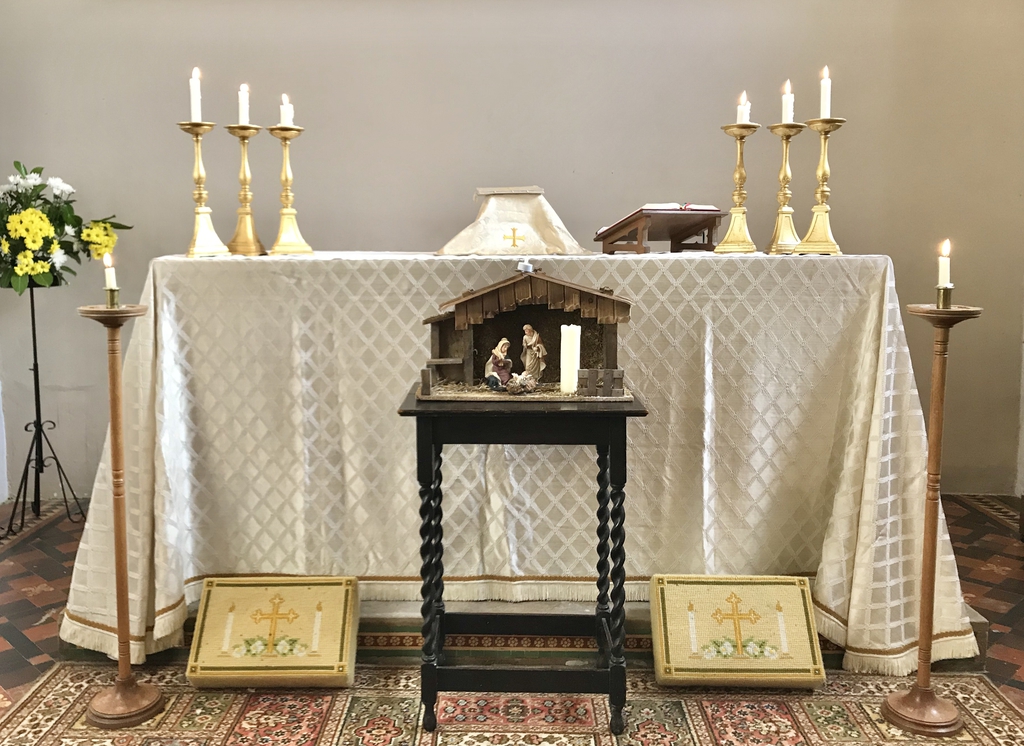 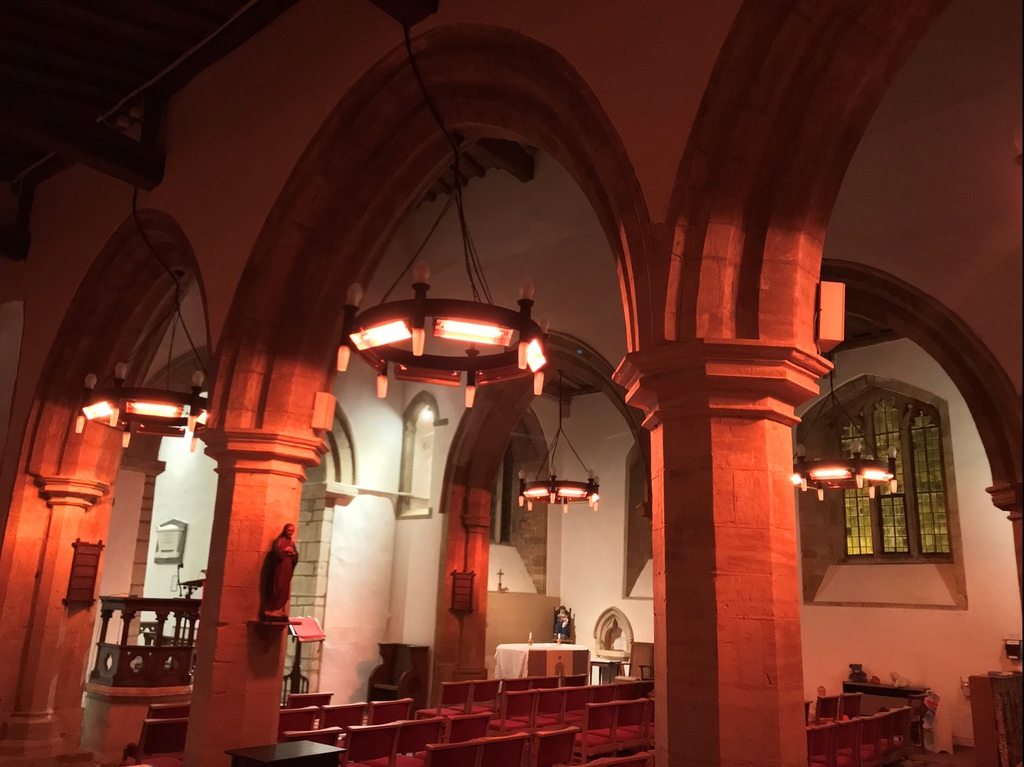 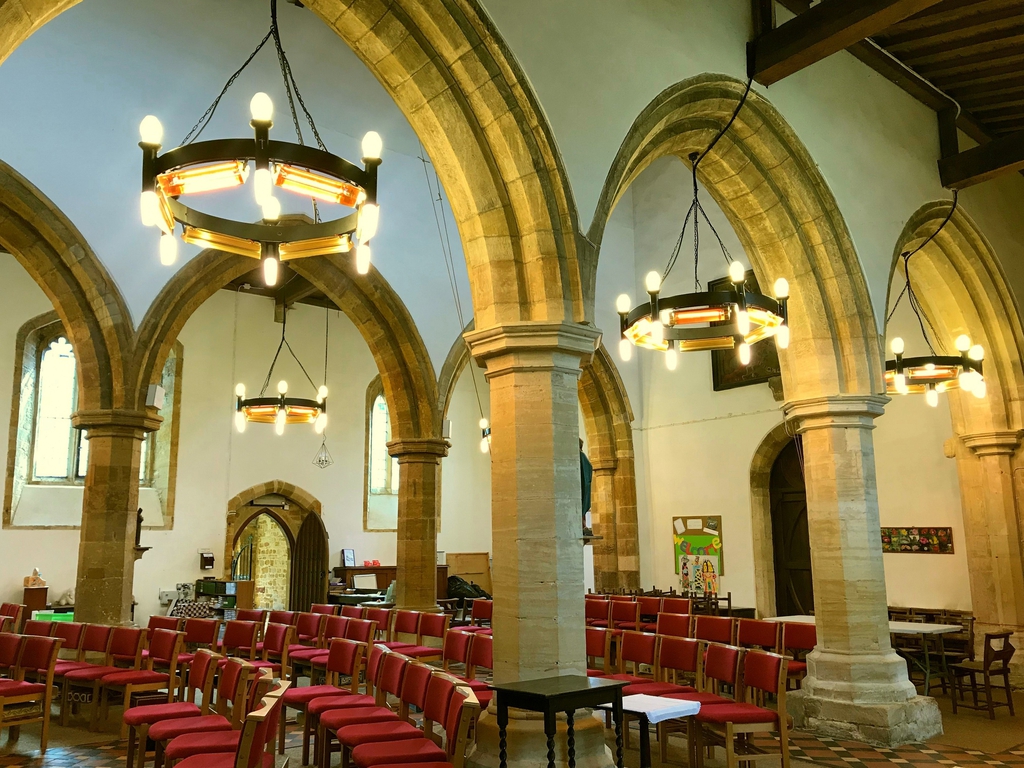 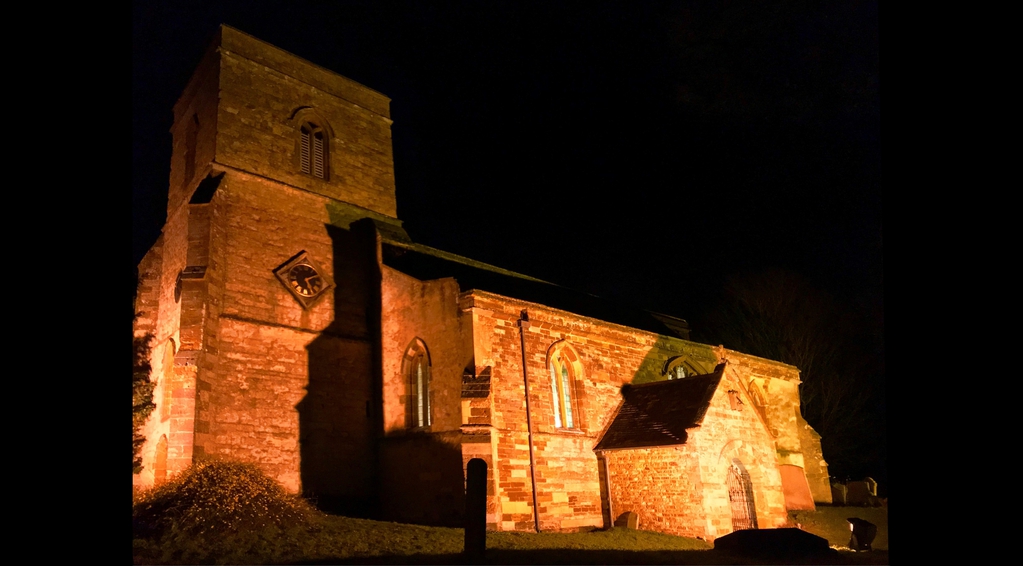 Holy Cross Church, Pattishall is a Grade II* listed building dating from the 11th century. It comprises a nave with two side aisles, tower, chancel and vestry, the latter being added around 1870. The tower houses 6 bells and is closed off from the body of the church. Construction is generally of limestone and ironstone, finished internally with lime plaster, with timber lined lead / copper roofing on timber beams. Floors are of a solid construction of tiles and slabs.

The first written evidence of Pattishall appears in the Domesday Book of 1086. We find 'Pascella' which scholars interpret as Paetti's or Paettel's hill, and by hill they infer a fortified site or 'wic' as the Anglo Saxons termed it. The site of this is probably where the Church and Manor house stand today; a limestone outcrop with wide ranging views and well away from the Roman road (A5).

The entry for Pattishall in the Doomesday Book is roughly translated as;

Maurice holds 60 acres from an Inherited estate of Botebot.”

During its history Holy Cross church has been used by the community for well over a millennia, as a Centre of worship, a place of refuge, a meeting place, a dispenser of education and charitable gestures, a market place for livestock; a focus of debate or dissension between puritans over the merits of blood sports, and the rights of parishioners to gather kindling in the adjacent woodland (possibly Royal Forests).

The settlements of Eastcote, Dalscote, Astcote and Pattishall were originally separate and distinctive with their own field systems. They were probably drawn together in the times of consolidation by Wessex Kings in the tenth century after the activities of the Vikings.

There are parts of the church which are Anglo-Saxon and it is now considered probable that there was a building here before the Normans came. The Church would be part of the patrimony of the local elites. It is no accident that the current building occupies the strategic high ground in the village and lies alongside the Manor house of the Wahils.

Holy Cross Church now serves the four villages of Pattishall, Astcote, Eastcote and Dalscote having a total population of around 1,800 to 2,000 people

The present Church has small sections of stone-work of Anglo Saxon-Norman provenance in the north wall adjacent to the fine 13th century tower. The internal arrangements consist of a chancel, north and south isles, a nave, south porch and west tower. The chancel arch is the major feature inside and belongs to the late 11th century.

The nave is largely 13th century arcading. The church formerly had a screen and there were galleries at the west end during the 19th century. Pride, competition, the fashions of architectural styles, the changes in ceremony and forms of worship, and the generosity of single families of wealth and influence have all been responsible for change. Such change did not pass without comment, when the narrow chancel of the earlier two-cell church was opened up in the late 11th century by the present arch, there was probably a murmuring at innovation brought by newcomers, Normans replacing Saxon styles. The south aisle opened up in the time of King John (1200).

There has been a long history of restoration; the most recent of which is work on the south aisle walling and windows and the complete overhaul of the Bishop organ. The restoration work has involved many members of the community across all denominations and social groups.

Back in the seventeenth century there was further disturbance and debate. The parish seemed to have been a focus of puritan activity and neglect of the fabric. Archbishop Laud commanded a survey of churches in the whole diocese and in 1637 Pattishall was visited. The Bishop's visitors wrote of the neglect of the fabric, defilement of porches and a shared surplice between two priests.

After the Civil War the Church tower was rebuilt in 1663. The initials of the churchwardens and the benefactors remain on the buttresses today. In the same year Alice Duchess of Dudley and Stoneleigh in Warwickshire gave the Church a set of new plate (now available for viewing at Peterborough Cathedral).  Seven churches were so befriended by her bounty.

The ravages of time necessitated the re-casting of the 17th century bells which were cast and re-hung in a new frame by Gillett and Johnston of Croydon. Re-roofing of the north isle and underpinning of the north wall were carried out in the 1920's. Electricity was installed in 1934 replacing the oil lamps.

The Church has a vigorous tradition of bell ringing with a large and active current group. The six bells are to be heard regularly on Sundays and practice days/evenings. The Church is committed to Christian Stewardship and a wide involvement in the life of the community.

Between 1978 and 1984 a major programme of internal and external restoration was carried out. The interior was re-plastered and lime-washed by volunteers from the community, the south aisle was extensively repointed, new stone inserted with a top coat of cement and rubble render.

As you enter the building you will notice a sundial, this was installed by Timothy Goodman a clockmaker of Towcester in 1693. The door you open was a gift of the late Rene Curtis of Pattishall and designed by Messrs Featherstone & Austin, Architects of Northampton in 1984. Similarly, the door on the west side of the tower a gift of the Hawtin family and the aforementioned new gates a gift of Peter Evans and family.

In 1990, by Order in Council the Queen confirmed the creation of a new joint Benefice; that of Pattishall, with Cold Higham and Gayton with Tiffield. The patrons of the new benefice are jointly; the Bishop of Peterborough, Sidney Sussex College, Cambridge and the Society for the Maintenance of the Faith.