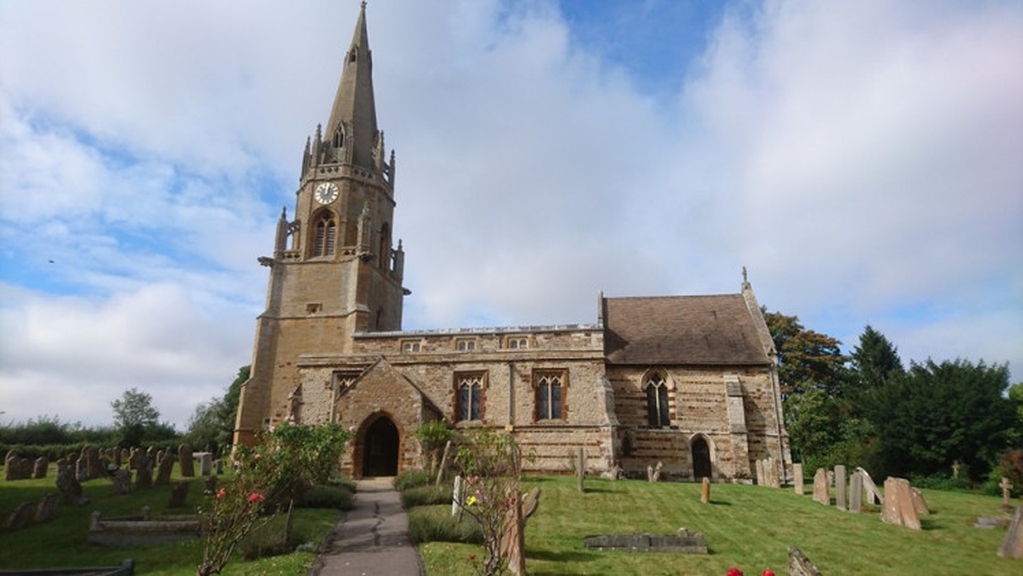 This beautiful village church is built with local pale limestone and deep brown ironstone, and stands within a most lovely churchyard.

From the general survey of 1085, the Doomsday Book states that "Wilby" was in the hands of Countess Judith, niece of William the Conqueror.  Provision was made for the building of a new, more permanent church probably on the site of a previous wooden building built in this originally Danish settlement.

The Norman building was gradually rebuilt and improved with a north and south aisle and clerestory windows in the Early English style by the 14th Century.  The simple stone font, lined with lead, probably belonged to the original church.  In the 16th Century, there had been a Rood screen in the north aisle as well as before the High Altar which was an unusual feature.  There are traces of the Rood loft stairs to be found behind the pulpit.  The north aisle had to be demolished in 1839 as it was in very poor condition.

The tower and spire, in the Decorated Style is one of the most attractive in Northamptonshire.  The tower is square at the base, then octagonal with a spire and a parapet of quatrefoils with corner pinnacles and miniature flying buttresses.  There are some good gargoyles and corbels, though very weathered.  The tower contains a peal of six bells and has an excellent and enthusiastic team of bell ringers.

The interior of the church, particularly the Chancel, was restored during Victorian times when the vestry and organ chamber were added and the stained glass windows inserted.  The south aisle remains unchanged with traces of medieval glass to be found.

Notable Rectors include Andrew Perne (1625–1654) who accepted Presbyterianism in 1645 and preached twice before the Long Parliament and Thomas Percy (1756–1782) who later became Bishop of Dromore, County Down.  Thomas Percy took great care of the Church registers and was responsible for rescuing parish records from 1562.  He compiled "Reliques of Ancient English Poetry" and was a member of the Garrick Club.

St Mary's has been a symbol of Stability and the Christian faith of our village for more than 800 years, sharing the love of God with the people of Wilby.  Today, with a growing congregation and thriving, adjoining C of E Primary School, it is still very much a focal point of the life of the village.