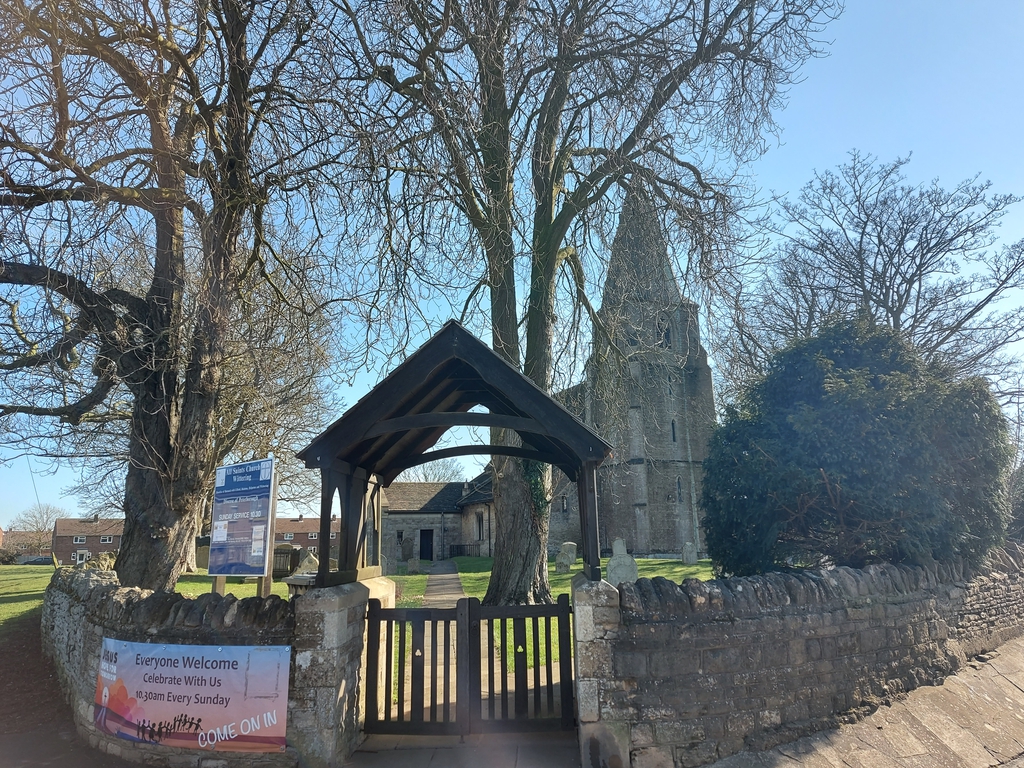 The Saxon church was built between 950 and 981 AD and consisted of a chancel and nave, much of which remains intact. None of the original doors and windows remain. Between 1140 and 1150 AD a north aisle of two bays was added which was widened in the 15th Century to bring it’s north wall into line with that of the north chapel. The north chapel with its tomb recess was built around 1320 AD, together with the west tower and spire. The porch through which the visitor enters the church is modern and the south door dates to the 13th Century. The present spire is much shorter than the original one, which was struck by lightning in 1866. The final building work took place in 1969 when the vestry was added.

Inside the church the nave is 30 feet long and has walls that are two and half feet thick. At the west end of the nave is a plain round font, the bowl of which is known to be of great but indeterminate age. Two Norman arches bearing the original zigzag design stand to the north of the nave. On the east respond of the arcade on the nave side is a 15th Century bracket above which is the rood-loft door. On the north wall of the North aisle there is a fairly modern two light stained glass window and a blocked 15th Century door. On the west wall of the north aisle is 15th Century trefoil.

The most striking internal feature is the massive chancel arch. H M and J Taylor in their work ‘Anglo Saxon Architecture’ describe it as ‘...of a massive grandeur unequalled in any other of the small Anglo-Saxon churches’. The arch stands fourteen feet in height with a span of seven feet. The heavy imposts of plain roughly shaped blocks slope inwards towards the jambs which themselves rest on square edged plinths, again roughly hewn. The arch is semi-circular, and decorated with a moulding of three rolls., one on the east wall face, one on the west wall and the third between the two on the soffit. The jambs are similarly decorated. There is a hollow chamfer up each of the comers to provide further decoration. The western wall carries a pilaster strip beside each joint and round the head of the arch.

The chancel measures 16 feet by 13 feet and was originally 24 feet high. The gable has been raised at least twice. In the east wall there is a 15th Century stained glass window of two cinqfoil lights with a quarterfoil in the head showing the Ridel coat of arms. There is a 13th Century lancet window on the south wall of the chancel and a restored late 13th century window of two lights with quarterfoil circle in the head on the same wall to its right. To the left of the lancet window is a 15th Century bracket and locker. The arch linking the chancel to the north chapel bears four 10th Century carvings of faces, one of a veiled lady and one of a man with long protruding tongue.

In 1968, the year of the 50th Anniversary of the Royal Air Force, the north chapel was converted into a RAF commemorative chapel. Previously it had been used as a vestry and site for the organ. Designed by Lawrence Bond, a Grantham architect, it was dedicated to St Michael and the ideal of the triumph of good over evil. The chapel stands as a fitting memorial to the gallantry and self-sacrifice of those service personnel whose names are recorded in the book of remembrance. A special commemorative envelope was issued from RAF Wittering bearing a coloured reproduction of the stained glass window. The stamp used was the one shilling and the envelope was hand franked with a drawing of a Victor aircraft, a cross and the words ‘Dedication of Memorial Chapel, RAF Wittering, Peterborough. 28th September 1968’. The stained glass window was designed by H Harvey and depicts St Michael the patron saint of the RAF. Incorporated into the design are figures of the RAF and a member of the WRAF together with the RAF and station crests. The altar front, designed by Miss Hopper is a modern design depicting the firmament of heaven and, together with the altar linen, was presented by members of the WRAF. The cross and candlesticks, the altar and two tables were crafted in the station workshops. An aircraft propeller was used to make the candlesticks and cross which is unusual as it reverses the traditional free standing design by having the shape of the cross cut out of the metal. The altar rails are made of aluminium and copper with wooden sections of oak. The tapestry kneelers were made by the wives of officers from the station. The standard of 139 squadron was laid up in December 1968 and the standard of 4 Squadron was laid up in 1984. The plain arch linking the north aisle and the chapel was built in the 15th Century when the north aisle was extended. On view are a series of long and short quinions

The survival today of much of the original building can be attributed the poverty of the village in former days. Two periods of time have marked the internal fabric we see today. In 1870 it was proposed to abandon the church and replace it with a new one but lack of funds forced this idea to be abandoned. Instead, extensive restoration work was undertaken. The oak screen dividing the tower from the nave was removed. An oak rerodos was bought from St Martins Church Stamford and remained behind the altar until 1968. The stone floor was removed and replaced by red and black tiles unsuited to the design of the church. A number of old gravestones were set into the floor but it is not known if these remain in situ. One authenticated gravestone is that of the Ridel family dated 1792. In the 1960’s Rev G H Bradshaw was the driving force behind extensive renovation of the church. During this time the vestry was built and a modern heating system installed.

The furniture is of no great antiquity. The oldest pieces are the pews near the front that are 17th century oak. The rest are of mixed oak and deal copied from the older pews.

There are two sets of 19th Century plate. The set in use is silverplate made in 1896 and presented by the widow of the third Marquess of Exeter. The set comprises one glass and silver flagon, two patens and a chalice each engraved ‘In memory of William Alleyne Cecil, third Marquess of Exeter, presented by his widow’. The earlier set dated 1843 is unusually made of pewter and consists of a font, an alms dish, a paten and a gilt lined chalice. These are inscribed ‘Parish of Wittering Christ Turnhill Church warden 1843’