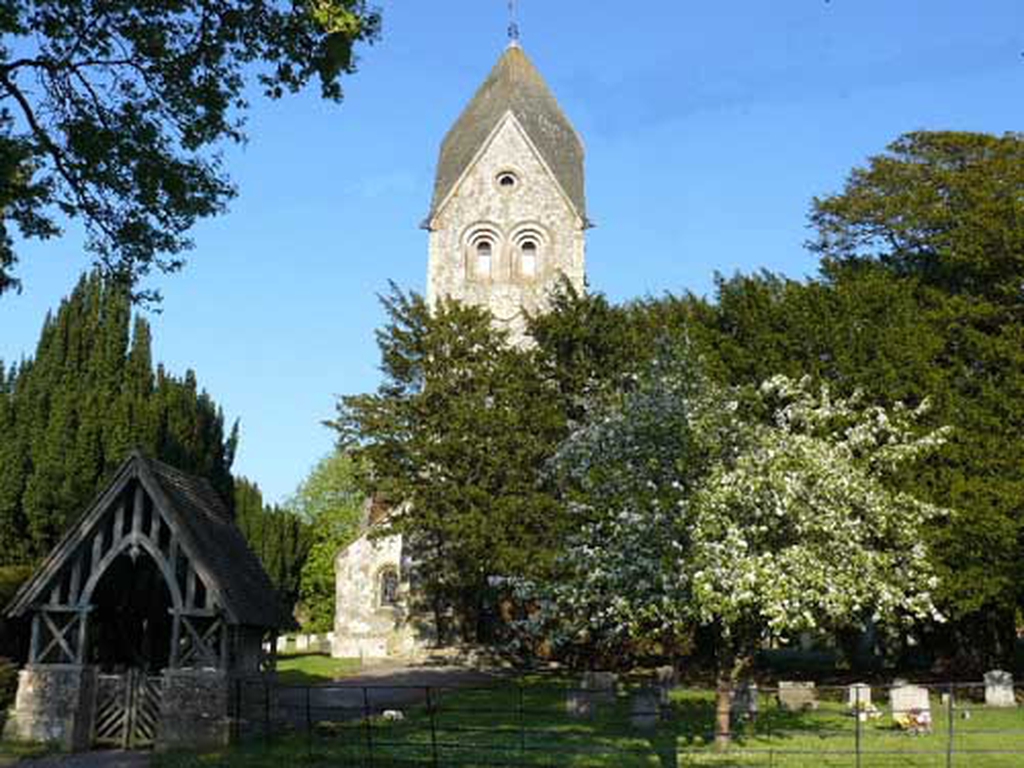 The Church of St. Peter & St. Paul , dating from 1865, is a fine example built in the Norman style in local stone. Its architect was Samuel Sanders Teulon. He was of Huguenot descent, born in 1812 at Greenwich, setting up in independent practice in 1838, and being constantly in demand until he died in 1873. Teulon's earlier designs were generally in Tudor or Elizabethan styles, but he later became a supporter of the Gothic revival; he also restored and recast many Churches. It was J.J. Maberly, of Hawkley Hurst, for whom he had previously designed a house, who commissioned Teulon to build the Church. It is in stone after a simple design in the Norman style; and the tower is a ?Rhenish Helm?, more usually found on the continent, though there is a fine medieval example at Sompting in Sussex. It is not known what were the reasons for the design being used here, nor indeed for any of the designs for the rest of the Church, which are very restrained and must have been entirely different from Teulon's usual style at that date. At all events he has left us a Church which is both suitable to its surroundings, and extremely attractive in itself, and for which we have every reason to be grateful. The building is cruciform, though the transverse arms terminated by gables containing rose windows, do not extend beyond the ground plan of the aisles. The nave is divided into three bays. The pillars which separate it from the aisles have elaborately carved capitals, the subjects being emblems of our Lord and of the Evangelists. The corbels supporting the open timbered roof are carved into the forms of the trees mentioned in Scripture, the palm, plane, ebony, vine, pomegranate, fig, gourd, olive and rose of Sharon. The corbels in the aisles are angels. The east window consists of three lights, above which is a circular window. These are memorial windows and filled with painted glass by Ward and Hughes. In the centre is the Ascension, and on either side, the Baptism of Christ and the Last Supper. The rose window above, depicts Christ in majesty. Windows in the aisles contain figures of the Twelve Apostles. In the south wall of the chancel there was a particularly fine carved alabaster panel, of English work, depicting the betrayal of Christ by Judas. This was stolen in the 1980's, but we are fortunate to have a carved wooden replica of it. It is suggested in the Victoria County History of Hampshire that it originally formed part of the reredos of the old Church, but this is not certain. The stone pulpit was removed in 1996, and its base now forms the Altar in the Maberly Chapel. The Organ is a 19th century instrument, by the London firm of Bevington, originally with a mechanical or tracker action. Ivemey & Cooper rebuilt it in 1939, with pneumatic action. In 1999 it was rebuilt by Henry Willis & Sons, with electric action, and the addition of a second manual. At the east end of the south aisle, in the arch above the organ screen, is the Hawkley Mural, installed in 1991, and the work of local artist, Sally Maltby. Above the words, "I will lift up mine eyes unto the hills," it depicts the cycle of life in the countryside. In the belfry there are eight bells, three of them from the old church, two from about 1450 and one from 1624. When the present church was built, Rebecca Maberly presented two more bells. In 1900, another was added in memory of Churchwarden George Wakeford, and Mr. and Mrs. Clive Davies gave the last two in memory of their son Harold, killed in action with the Royal Navy in World War II. The Tenor weighs 8cwt. 1qtr. 25lbs. and was recast in 1997 in memory of former Tower Captain, Charles Pound. It replaced the one given by Rebecca Maberly in 1867. To mark the millennium, a new west window was installed. It is the work of Simon Whistler, and depicts a cockerel, and the crossed key and sword, emblem of St. Peter and St. Paul. The Archdeacon of the Meon, the Ven. Peter Hancock, dedicated it at a special service in September 2000.

Modern language Common Worship Holy Communion on the 1st and 3rd Sundays and usually Common Worship Morning Prayer on the 2nd Sunday  (1 in 4 of these 3rd Sunday services are Book of Common Prayer).

On the 4th Sunday of the month there is an all age Family Friendly Service at 10. 30 am.

The Sunday School meets in the Village Hall at 10. 30 am on the 3rd Sunday of the Month, except August and November. Further information from Elizabeth Hawkins 01730 - 827502.

Children's Workshops are also offered in the Village Hall at 10.00 am to 12 noon on the Saturday before Christmas, Mothering Sunday and Harvest Festival annually.   Further information from Elizabeth Hawkins 01730 - 827502

Further details of services and event can be found on the village website  -  www.hawkley.org   under the heading "Church".