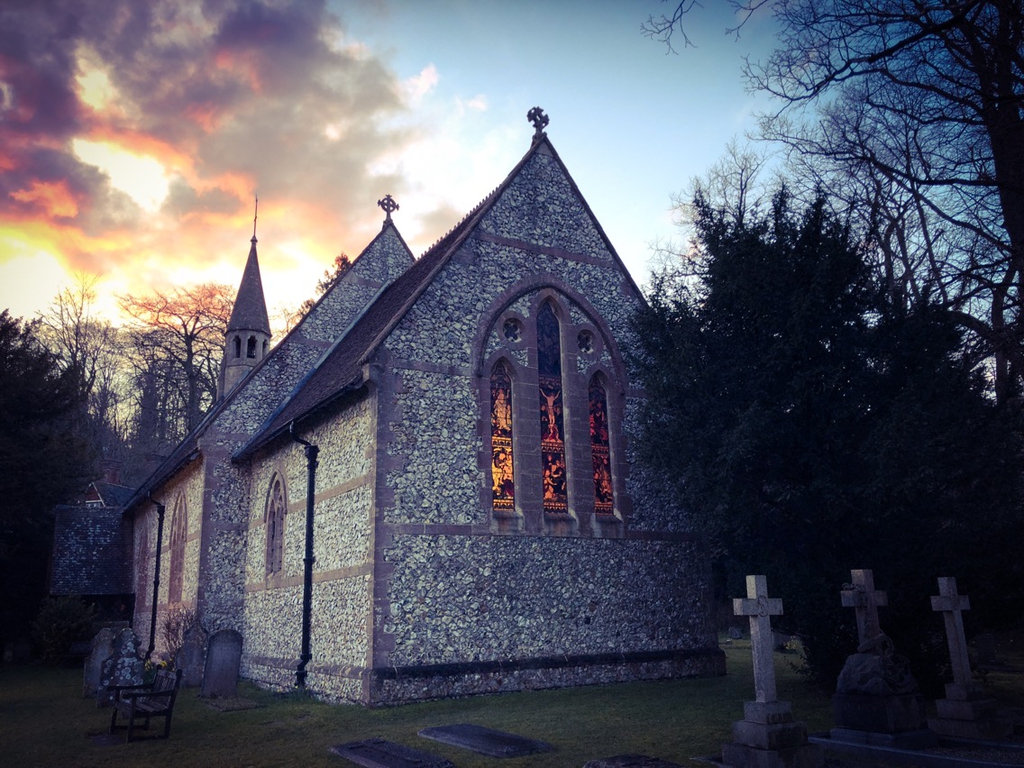 The Life of Langrish Church and the Talbot-Ponsonby family

Although Sir William Jolliffe and Mr John Nicholson were Lords of the Manor of Langrish in the 19th century , the true ‘squires’ were members of the Waddington family. They were lords of their little kingdom and as a contemporary writer stated, ‘Happy is the parish that has a good king’. It seems that the Waddingtons were ‘good kings’.

In 1840, John Horsey Waddington of Shawford House Winchester bought a farmhouse, buildings and land in Langrish and extended them until they became the present Langrish House and Home Farm.  He was known for his good works, and it was one of his sons George, whose wish it was to have a church at Langrish.

George selflessly denied himself many things and put the money from his fellowship at New College Oxford towards the cost of building the church. In 1869, plans were made for building the church but it was not completed until 1871, George sadly having died in January 1870 did not see his wish fulfilled.

After George’s death and the completion of the church, his brother John gave the land and assisted considerably in building the vicarage in 1872. In that year, he also built the school and the schoolhouse and kept them going until his death in 1880. They are now private houses, High Bank and Flints.

At this time Charles Talbot-Ponsonby, of Irish extraction, married Constance Delme-Radcliffe of Hitchin Priory, Herts, who inherited from her maternal uncle, John Waddington, the small estate which comprised the greater part of Langrish. He sold his Irish estates and settled with his wife at Langrish.

Many of the villagers owed their living to him as tenant farmers, labourers, gardeners, coachmen, domestic servants and doubtless the local tradesmen who depended largely on his patronage. He and his family aided the vicars, who were, in effect, their second in command. They gave prizes to the day and Sunday schools and organised concerts and musical evenings to raise money for the village. If there were deficits in the church funds he paid them and contributed to church repairs.

He was Vicar’s Warden until 1918 and every Christmas he and his wife would give useful presents to tenants and workers, often delivering them in person, receiving the appropriate salutations and curtseys from the delighted recipients. He was Chairman of the Vestrey and continued as chairman when it became the Parish Council in 1894. Charles and Constance had eight children, all of whom brought up in Langrish House, which must have been an ideal childhood. The family has continued on in Langrish House, via Langrish Cottage and again in Langrish House where the current family lives.

The first vicar of Langrish 1871-1898 was the Reverend Edwin Paine, curate at East Meon. He noted some interesting facts in his Parish Letters.

In July 1893 there was a great drought ‘The earth is languishing, flocks and herds pining for want of water’

Mr Paine was not always satisfied with his parishioners. He lamented that the working men, carters, shepherds and milkers were not well represented in church and he wrote, ‘when the youth and maidenhood of a place are indisposed to self-improvement and their elders indifferent to their needs, they bring no quickened intelligence to their work and show little beside animal sensibilities in their enjoyment’.

An observation which has been expressed more succinctly in recent years.

In his letter of resignation in October 1897 he emphasised his difficulties. ‘My work here, as its first incumbent, has been one of incessant endeavour to make a long-neglected district come nearer and nearer to my ideal of what it ought to be, for Christ and Church. I sadly feel that my success has been but slight and that I have made very poor way. The labouring men and those growing up to be so, have been a leading and constant concern to me. The larger portion of them have little or no faith in God………..my hope is that a more able and stronger man, more conversant with the way of the agricultural labourer may come to lead them.

In January 1898 the Reverend John Vaughan of Portchester was appointed to Langrish. He wrote, ‘It will no doubt be difficult to succeed one who has been Vicar of Langrish from the time of its constitution as a parish, who has lived and laboured among you for 25 years and seen many of you grow up from childhood. But with the help of your sympathy and support I pray that my ministry at Langrish may prove a source of blessing to you all’.

Although Mr Vaughan’s Ministry was short, it was indeed a blessing. Inducted by the Bishop of Guildford, a large number of parishioners assembled in the churchyard. Every January he sent a Church Almanack to each parishioner, and from these we see the number of burials, christenings and marriages he conducted. He also started a Parish Magazine selling 88 copies in 1901. He held a children’s service on the second Sunday of the month during which baptisms were celebrated, services with wild flowers in the spring and cottage services at Stroud and Lower Bordean Farm, and a men’s meeting in the Vicarage in the winter. The Sunday School flourished, enjoying ‘treats’ in July at the Vicarage with tea, games and dancing. At the Christmas Party, prizes for good attendance were handed out.

On January 23 1901, the tolling of the church bells announced the death of Queen Victoria and so a memorable epoch in English history came to an end. The Parish Council collected 30 shillings towards the Queen Victoria Memorial Fund.

In May 1902 Mr Vaughan left to become Rector of Droxford. The working people of Langrish presented him with a silver inkstand inscribed, ‘We poor people were determined you should not leave Langrish without some token of our love for you.’ He was very touched and in his letter of thanks he said, ‘My dear friends, poor in the world’s goods, but rich in delicacy of feelings and kindness of heart; I thank you in all sincerity for the gratifying way in which you expressed your appreciation.’

1893 – Royal Wedding of Prince George and Princess Mary of Teck

The wedding was celebrated with a Flower service in the church – wild flowers being preferred by the ladies who did the decorations. In the afternoon there was a cricket match and games for the children followed by an ample tea. Before leaving, all received a commemorative medal.

The Diamond Jubilee was celebrated with a special service in the church on the Sunday. On Jubilee Day there was a cricket match in the vicarage field. This was followed afterwards by tea for all, in the recreation field, (which in those days was opposite the church). The adults had meat provided by Mrs Jones from the shop on Langrish Hill. Sports with prizes followed and the day ended with fireworks on the slopes around the village and a bonfire on Cold Hill.