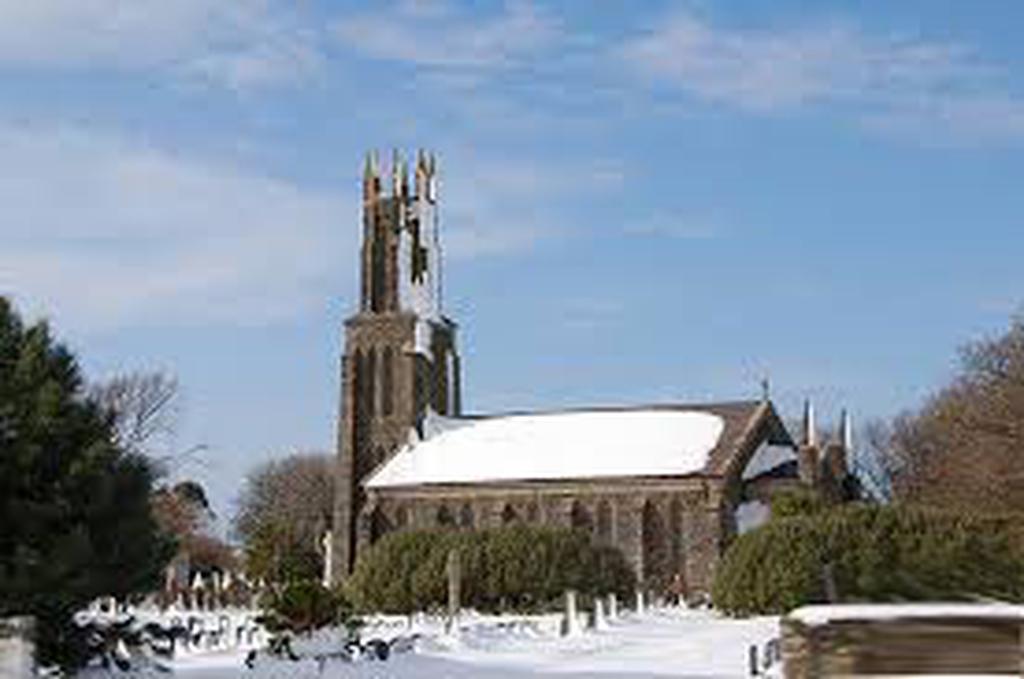 ABOUT OUR TWO CHURCHES IN BALLAUGH

Designed by John Welch, St Mary de Ballaugh Church dates from 1832. The exterior is an impressive attempt in local stone in the style of Boston Stump but reduced in scale. The Old Church was by the early 19th century at a distance from the centre of population - Bishop Ward presided over the vestry meeting of April 1830 that decided to build a new, and larger, church nearer the centre of the village. He laid the foundation stone, a mere month later. The £1714 cost was split £580 on a parish assessment with the remainder from the money the Bishop had collected in England for church building. A major restoration occurred in 1893.

The "new" Church is surrounded by a contemporary burial ground, and is an attractive building with a warm internal appearance. It has two community rooms and a kitchen that have been converted from space beneath the gallery. The tower houses three bells, two of which are in use. The Church is in regular use for services and similar events throughout the year, and is also the venue for local civic and community services and by the local primary school, and B-P groups. The community rooms are used  by the church for our monthly community luncheon club for people who are living alone, providing meals and social support.

THE OLD CHURCH, situated at The Cronk, Ballaugh

The Old Church of St. Mary de Ballaugh (from Bal-ny-laghey, homestead of the Curragh, or, more probably from Bal-laff, Our Lady’s Place) occupies a site of some importance in pre—historic times. In 1877 the grave of a young chieftain, dating hundreds of years before the coming of Christianity to the Island, was found 100 yards east from the Churchyard wall. Sepulchral urns have been found elsewhere in the parish. Like other ancient Manx Parish Churches, it is almost certainly the successor of Celtic and Norse Churches on the same site, and it contains material in its walls from previous buildings, notably the few remaining dressed stones used as cornerstones. The bell-cote resembles those in Saxon churches in England.

The church is first mentioned in a Papal Bull of 1231. The earliest known Rector was Donald McCorkyll (1408) and though little is known of the church’s history before 1700, it would be like other old Manx Churches, rectangular and three times as long as wide. In 1717 it was lengthened by 21 feet, the parish paying £12 and Bishop Wilson the rest. A gable was added at the west end, adorned by two pilasters and surmounted by a bell-cote. Tradition says that the two gate pillars were purposely built leaning in. They are not earlier than the 18th century.

Between 1757 and 1777 rear and side galleries, reached by an outer double stairway rising on either side of the porch, were erected by Rector James Wilks. The present north-side windows are 18th century at the earliest, and replace two small openings of earlier times. Because the Manx people believed Jeremiah’s statement that evil came from the north, there were very few windows on the north side of the Old Manx Churches.

In 1832 the new Parish Church was built. This was because the Old Church was then in a very bad state or repair, it was situated a long way from the village, and it could only seat 350 in a parish of 1487 people. For some years the Old Church was disused and fell into decay, but in 1849 it was rescued by Rector Howard who re-roofed it, removed the galleries and took down the 1717 extension to the chancel, thus reducing the length by one third. It was further restored by Rector Kermode in 1877 and again by Rector Elliott in 1955, since when it has been regularly used for Worship. Evening Prayers are said bi-weekly on Sundays at 6 p.m. and Holy Communion is celebrated on the first Sunday of the month at 8.00 am.

In the Church is an 11th century Runic Cross, the only one found in Ballaugh, which shows features of the great sculptor Gaut. The weather-worn Runic lettering runs "Ouliabr Loitulfsunr raisti krs thana aftir Ulb sun Sin" (Olaf Liotulfson erected this cross to the memory of Ulf his son) . The Font, made out of a red sandstone block, and built into a window-sill is of unknown antiquity. It is decorated with a cross cut in relief, and the Manx inscription runs "Ta un Chiarn, un Credjue, un Vashtey, un Jee as Ayr jeh ooilley" ("There is one Lord, one Faith, one Baptism, one God and Father of all").

On the North-East corner of the Church is a sandstone block which once bore the word - "Salvation". The two Jacobean chairs in the sanctuary were given by Bishop Wilson (died 1755) and the reading desk and pulpit were given by Bishop Hildesley and Rector Wilks in 1772. The earliest memorial in the Churchyard is to "Anne Ellison, 1654". The Burial Register begins at 1598 (the oldest in the Island) the Baptismal Register in 1607, and the Wedding Register in 1695. The Old Registers had become very dilapidated, so they were copied out by Thomas Howard (Rector — 1836-76)

All sorts of changes, have occurred since 1717 when the restored church was re-openedbut still the Old Parish Church stands, and still people come, like their forefathers, to worship God, though in rather smaller numbers than previously.