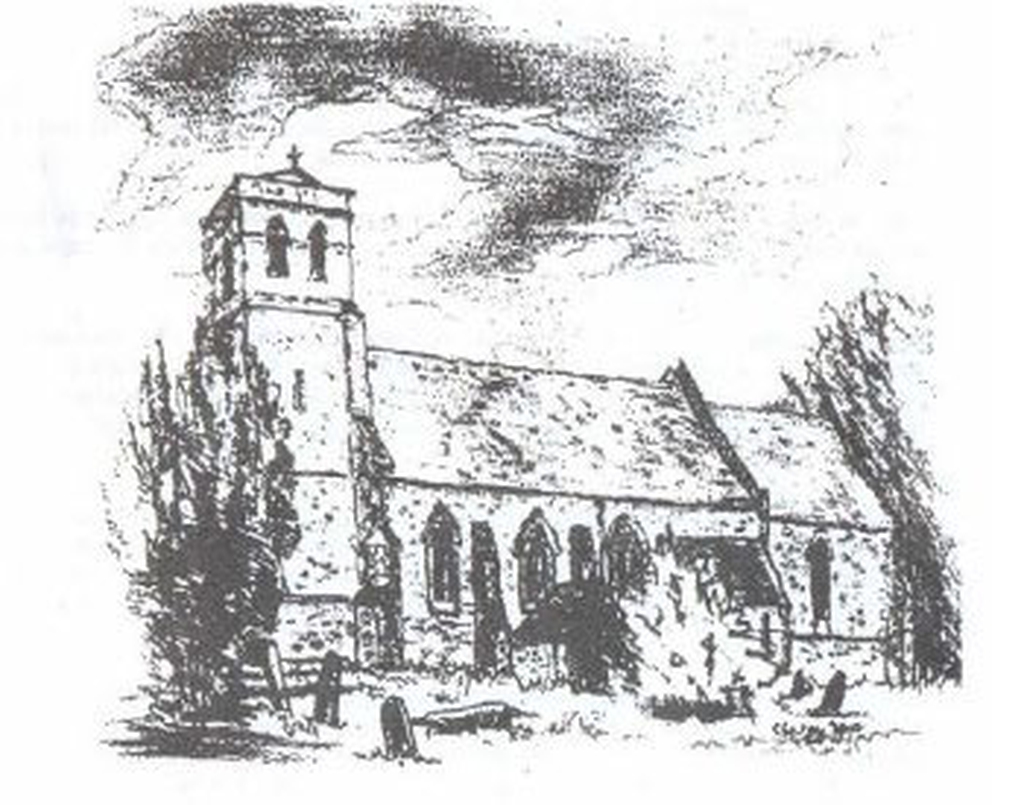 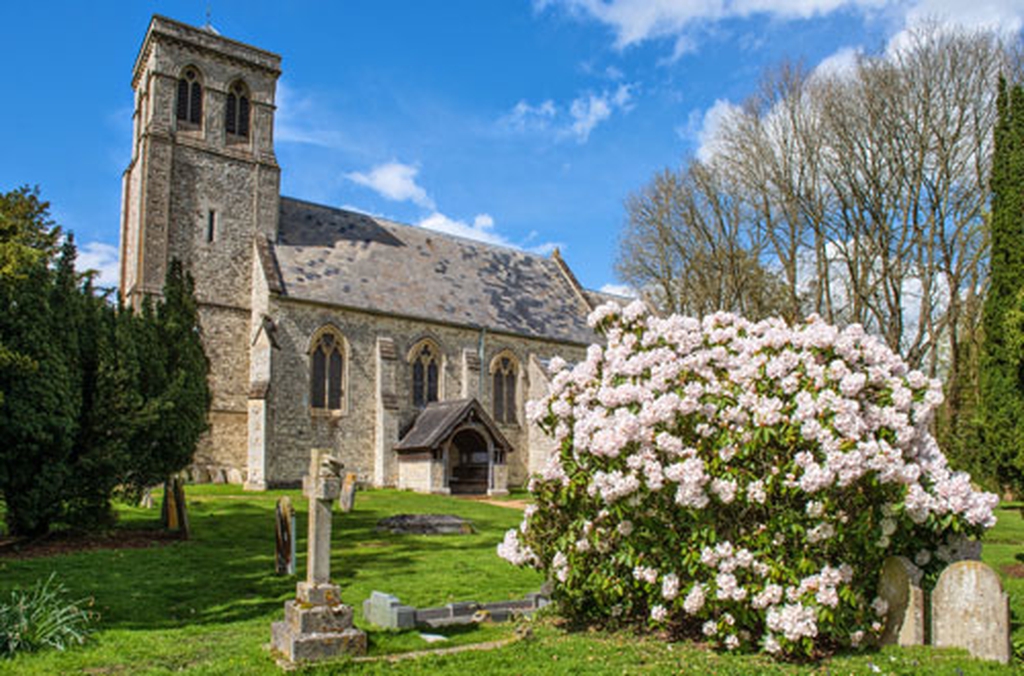 Consecrated on 5th October 1843, the Norman transitional-style parish church of All Saints’ in Dogmersfield was built by Benjamin Ferrey. It was the gift of the Rector, the Reverend Charles Dyson and his half-sister Mary Ann, on a site exchanged with Jane, Lady Mildmay for the old glebe lands in the Home Park of nearby Dogmersfield House. John Keble, founder of the Oxford Movement and life-long friend of Dyson, chose the site with a view to the convenience of the parishioners: estate workers and tenants housed in the village of Dogmersfield, newly constructed around the old hamlet of Pilcot. The late date of this church, however, does not reflect the antiquity of the parish.

The first known church in Dogmersfield – “the field by the lake where the water lilies grow” – is mentioned in the Doomsday Book, 1086, and was therefore most probably of Saxon origin. A later church with ‘narrow lancet windows’ of Norman construction survived until 1801. This church was situated close to Dogmersfield House, at that time a palace of the Bishops of Bath and Wells, and was used as the Bishops’ chapel and later as a family church by the Lords of the Manor of Dogmersfield.

The first Rector of the parish was Walter de Henleie, c. 1200. A board is displayed in the church listing the Rectors up to the time when the last permanent incumbent, Reverend K. S. Bradley, retired from office.

Among the owners of Dogmersfield Park were the Bishops of Bath and Wells, who held the parish for over 400 years – Bishop Jocelyn died there in 1191 – Ralph Flambard when Bishop of Durham, Henry I, Henry VIII, Edward VI and the three Wriothsleys, Earls of Southampton. The second Earl built a new mansion in 1728 to replace the original Bishops’ palace.

Notable visitors to the parish included Henry VI, who stayed here whilst hunting at Crondall, Henry VII and his son Prince Arthur who met the latter’s bride, Katharine of Aragon, on her arrival from Spain in November 1501, William IV when Prince of Wales and Prime Minister Canning. Gifts sent to Dogmersfield include wine from King John and deer from Edward I.

The East window was originally erected in 1950 to the memory of Helena, Lady Mildmay and replaced the original given by Charles Dyson. The west window was moved in 2006 to the North nave above the organ with a generous bequest from Mrs. Olivia Hoare. An additional inscription was added to commemorate Michael Rollo Hoare, MFH who previously owned the Dower House and was PCC Treasurer and a great benefactor to All Saints’ Church.

After a dispute in 1615 with his customary tenants, the third Earl of Southampton sold the estate in 1629 to John Godson and for nearly 100 years the estate was owned by various yeomen; Godsons, Dickensons, Terrys and Goodyers, finally devolving entirely to Martha, who as the last remaining Goodyer was a considerable heiress.

Martha married Ellis Mews St John, who was also related to the Paulet family and it was their son Paulet, created the first Baronet St John, who also started to repair the depredations on the estate. He built the new manor house, in 1728, which was enlarged in 1744 by his son Sir Henry Paulet St John. Sir Henry was responsible for the demolition of the old village of Dogmersfield which rambled across Tundry Green from Dairy Hill and the Blacksmith’s Shop to Duckery Cottage and Sprat’s Hatch Farm, leaving only the rest in neat groups of cottages, so neat that one of his relations declared he had made the village look like a Barracks. When the village was again reconstructed in the 1930’s, history was recalled by naming houses Katherine of Aragon, Lords and Ladies, The Barracks, Gossips and Old Bridge House.

Sir Henry Paulet St John-Mildmay, who took the name of Mildmay on his marriage to the heiress Jane Mildmay, continued the work of landscaping the Park making Tundry Green into a pond and building a church adjacent to Flood’s Farm in 1804 to replace the Norman church which had been unfit for use for three years. This new church, however, must have been badly built as it was in constant need of repair. Church accounts at this time record money paid to village workmen for repair of windows, doors, pews and bell ropes. Three shillings and sixpence (17.5p) was spent each year for brushes mops and brooms, bought at the new shop opened by Thomas Goatley at Pilcot House. The church income was supplemented by eight shillings (40p) a year for the church plate, which was on permanent loan to Sir Henry.

In 1836, Jane, Lady Mildmay, then a widow, appointed Charles Dyson as Rector, and from this time the convenience of the estate workers was considered. The final cottages were cleared from the Park, particularly Dairy Hill and the Blacksmith’s Shop which was set up at Forge Cottage; roads were built and repaired – Chatter Alley gets its name at this time from the People’s Charter – a school was started in the New Rectory by Mary Ann Dyson and finally, in 1843, in the new church.

Another Rector, Malcolm Farmer, who also gave the reredos, gave the first organ in 1908 and, in 1914, the Parish Room. Another organ was built and installed in 1994 with some pipes coming from a dismantled instrument at St John’s Church in Hartley Wintney. It was removed in July 2012 to a small church in Poland and a new Allen Q285D organ installed in its place.

Although most of the Church furniture dates from its inception, there are several articles which were moved from the old churches. There is a small fifteenth-century Sanctus bell (the other bells are a fine peal of three cast by Gillett and Johnston Ltd. of Croydon in 1924); a memorial brass to Anne Powlett of Herriard dates from 1590 – Anne was an ancestor of the Mildmays and a descendant through a cadet branch of the first Marquis of Winchester; tombstones in the belfry floor commemorate the Goodyer family and round the walls of the church are several tablets to members of the Mildmay family.

The Church Plate includes some interesting pieces including an Elizabethan Chalice of 1572, and a Paten which was the gift of William and Elizabeth Godson in 1677; a Paten Cover of 1569 and a Flagon of 1711.

The Altar and vestry windows were the gift of John Keble, then Rector of Hursley. The Altar picture of ‘The Lamentation’ has been attributed to Jacques de L’Ange a mid 17c Flemish artist, and was a gift from the Mildmays. Likewise also the marble font, which was brought from Rome.

Miss Butler presented the oaken font cover in 1934 to commemorate her parents. Mr Butler had been curate of Dogmersfield under the Reverend Charles Dyson, before becoming Vicar of Wantage and Dean of Lincoln.