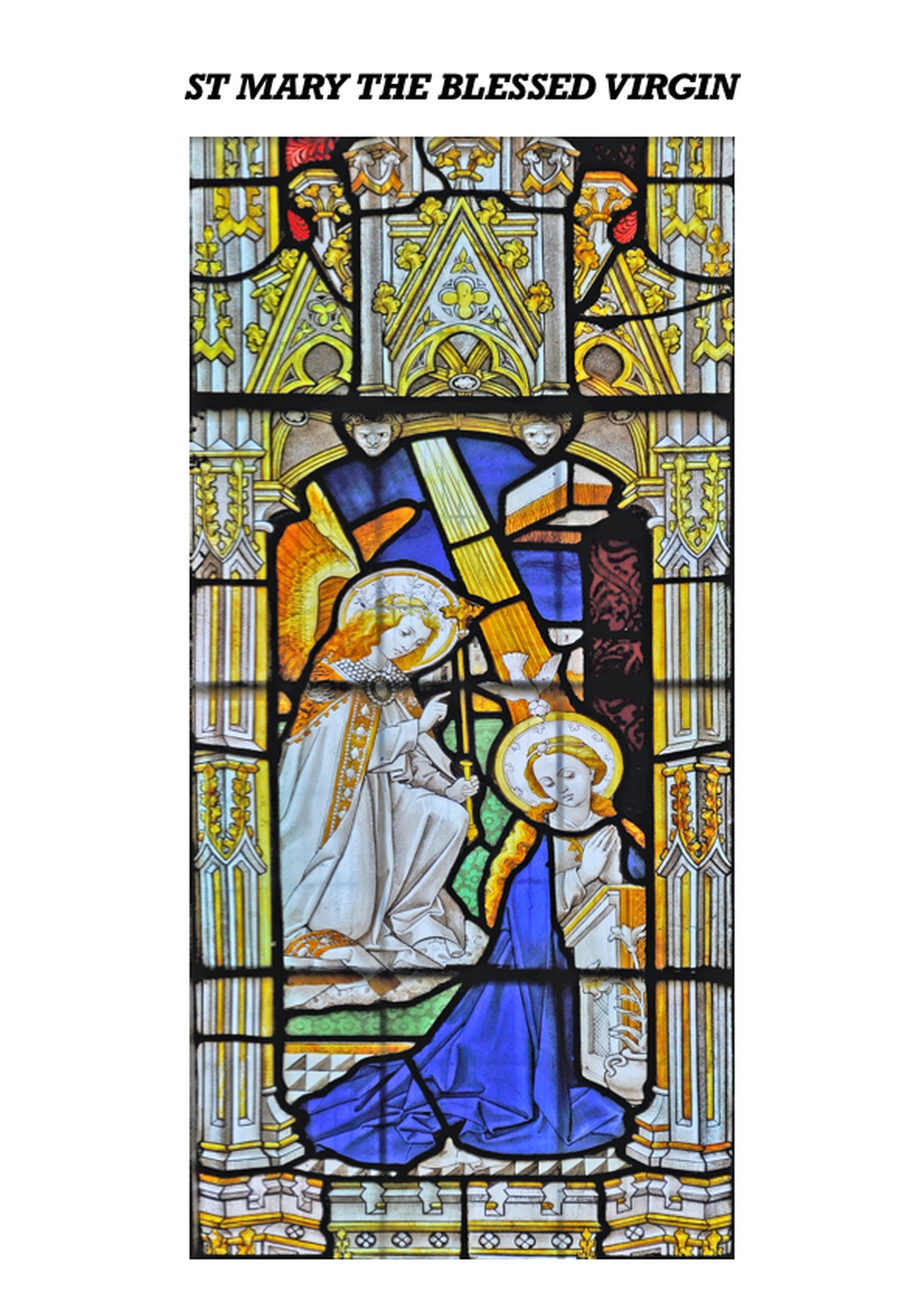 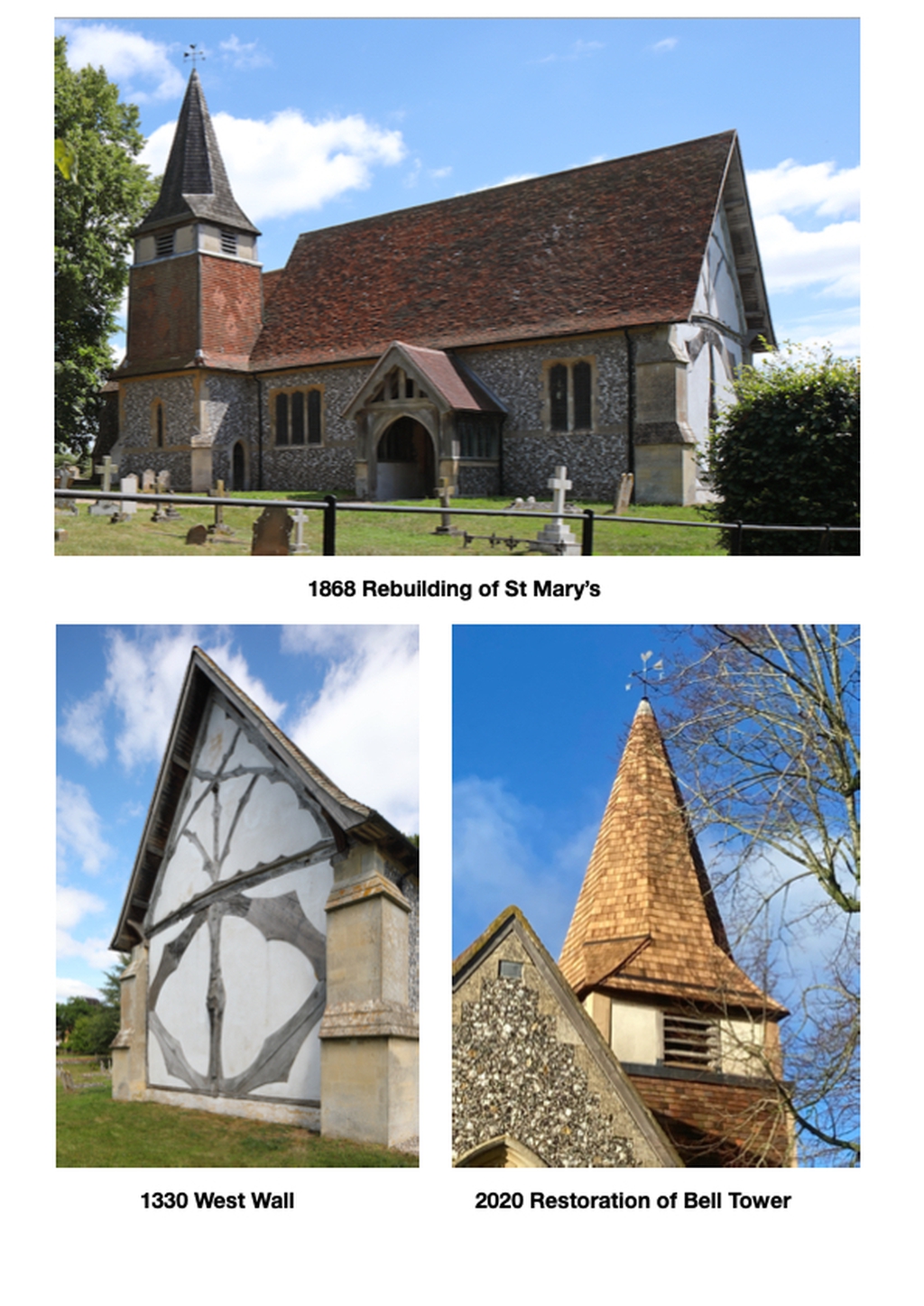 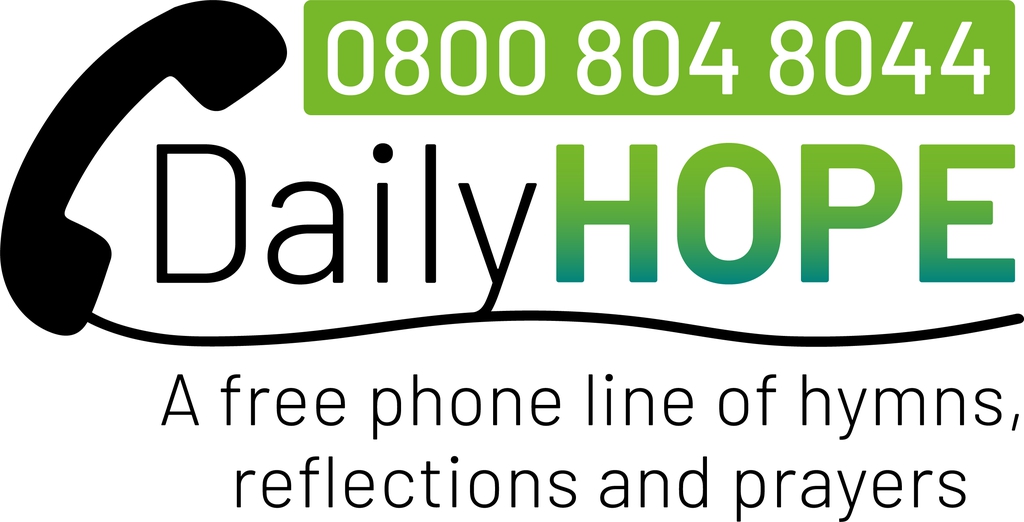 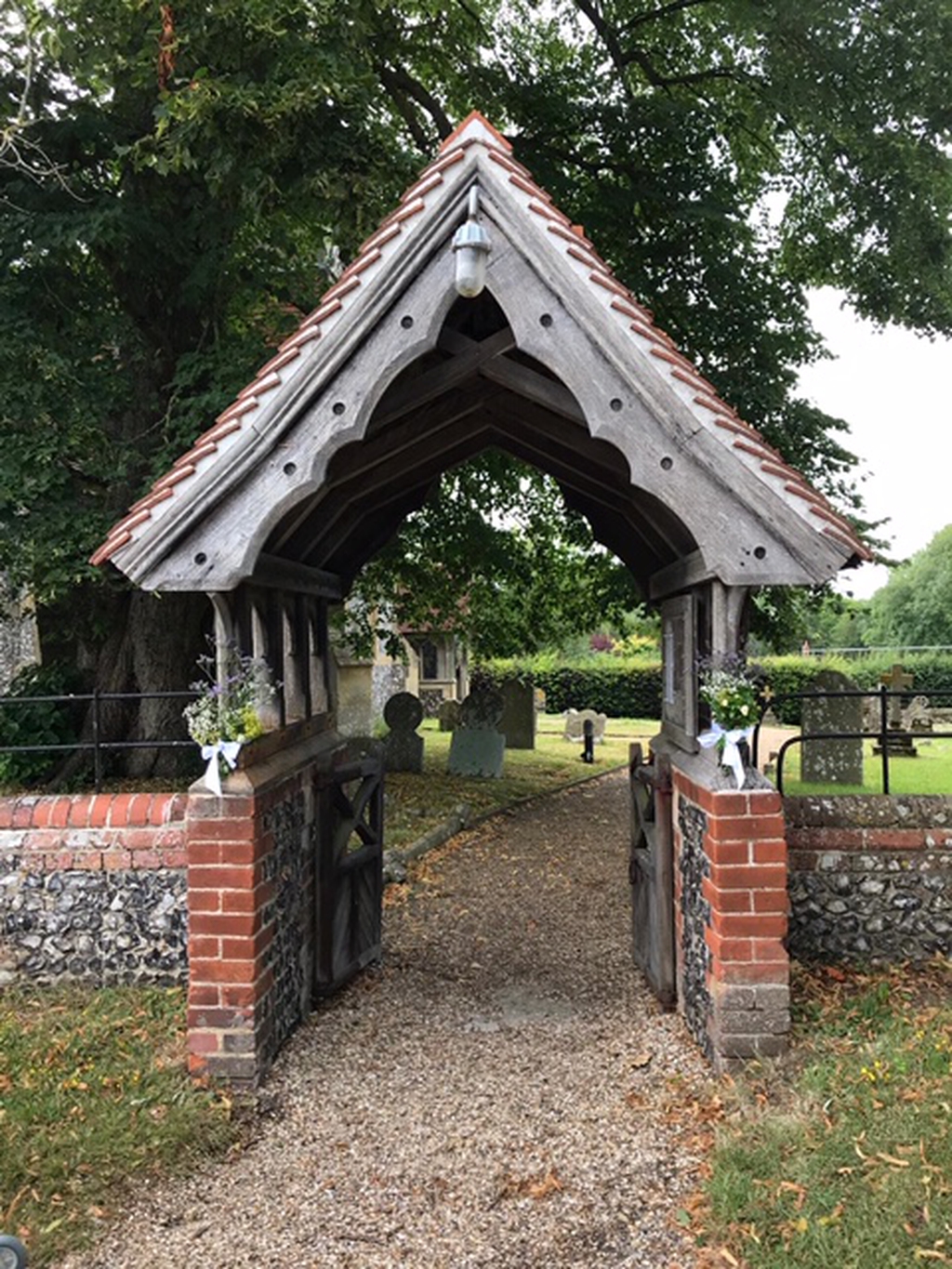 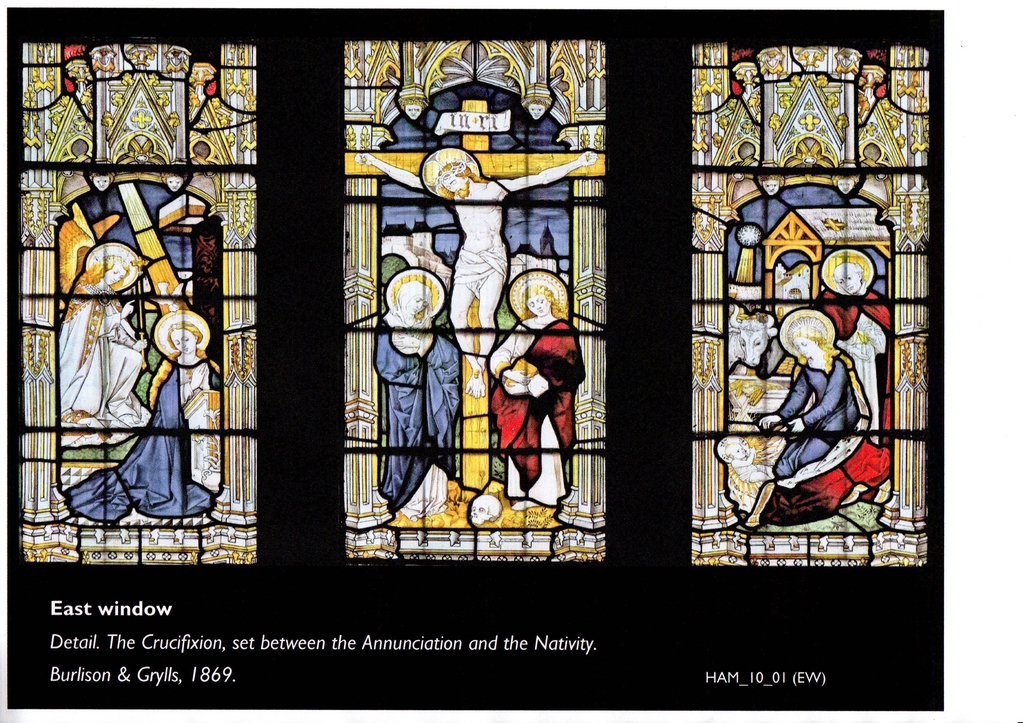 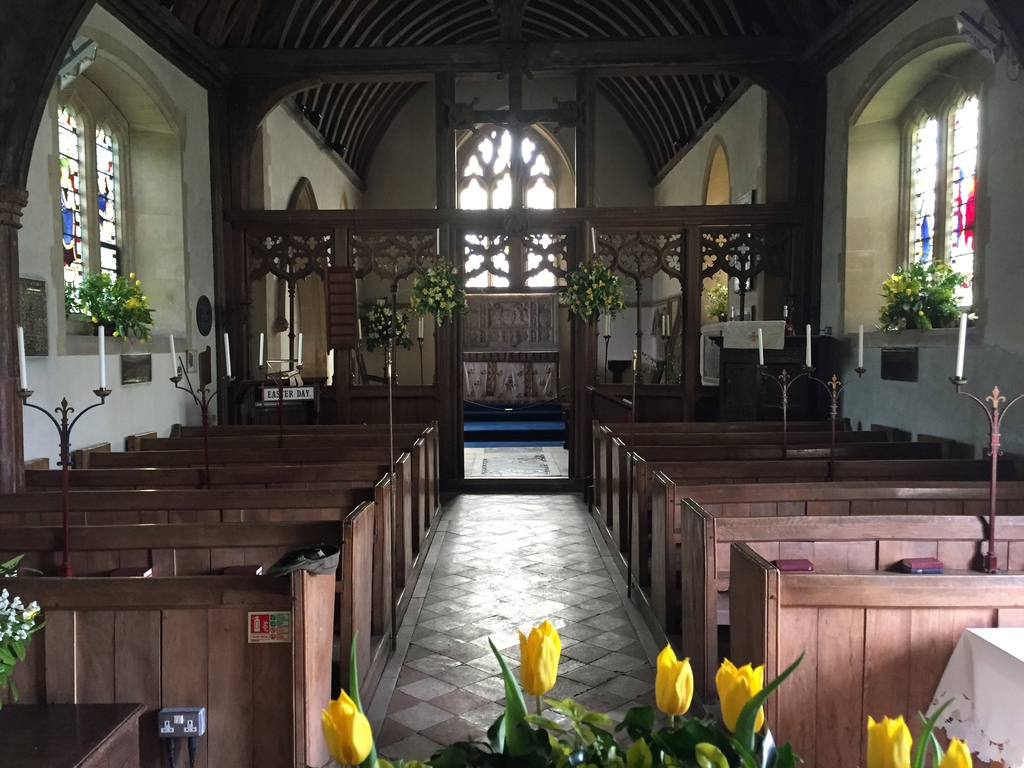 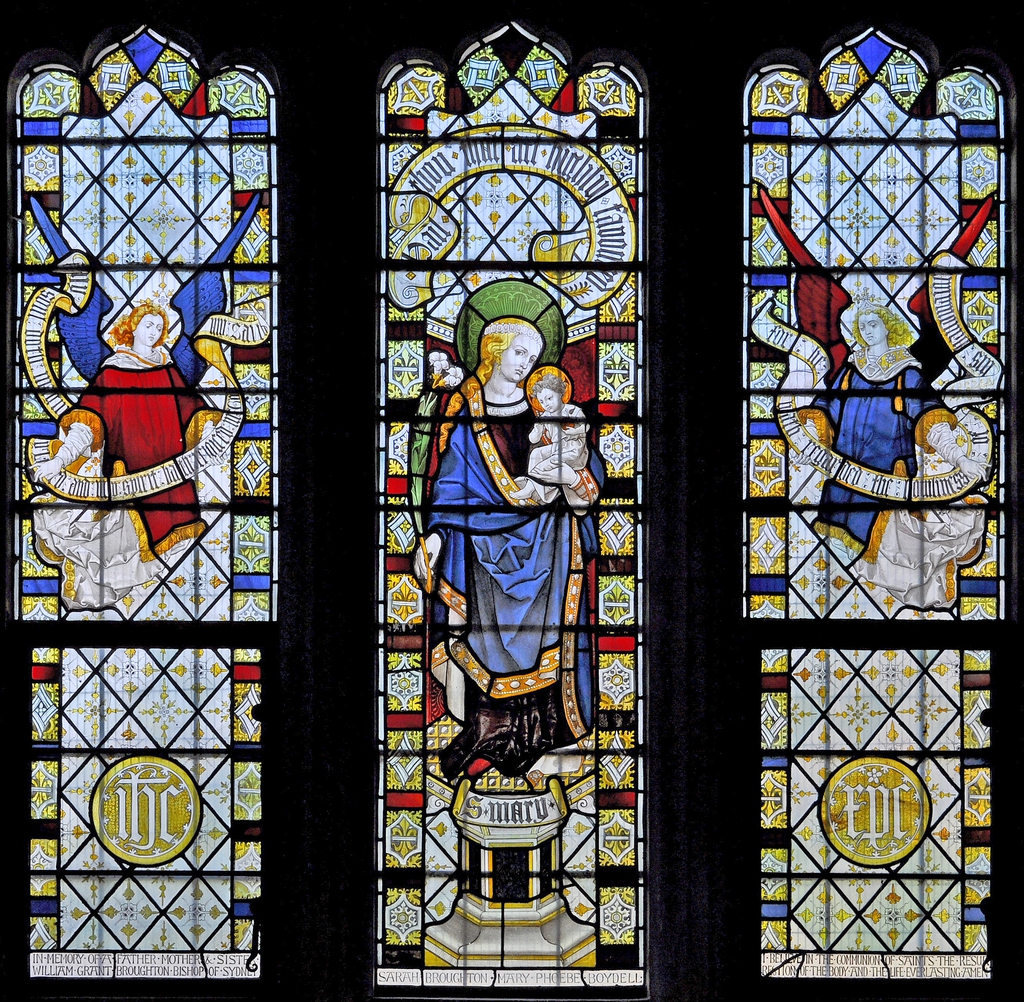 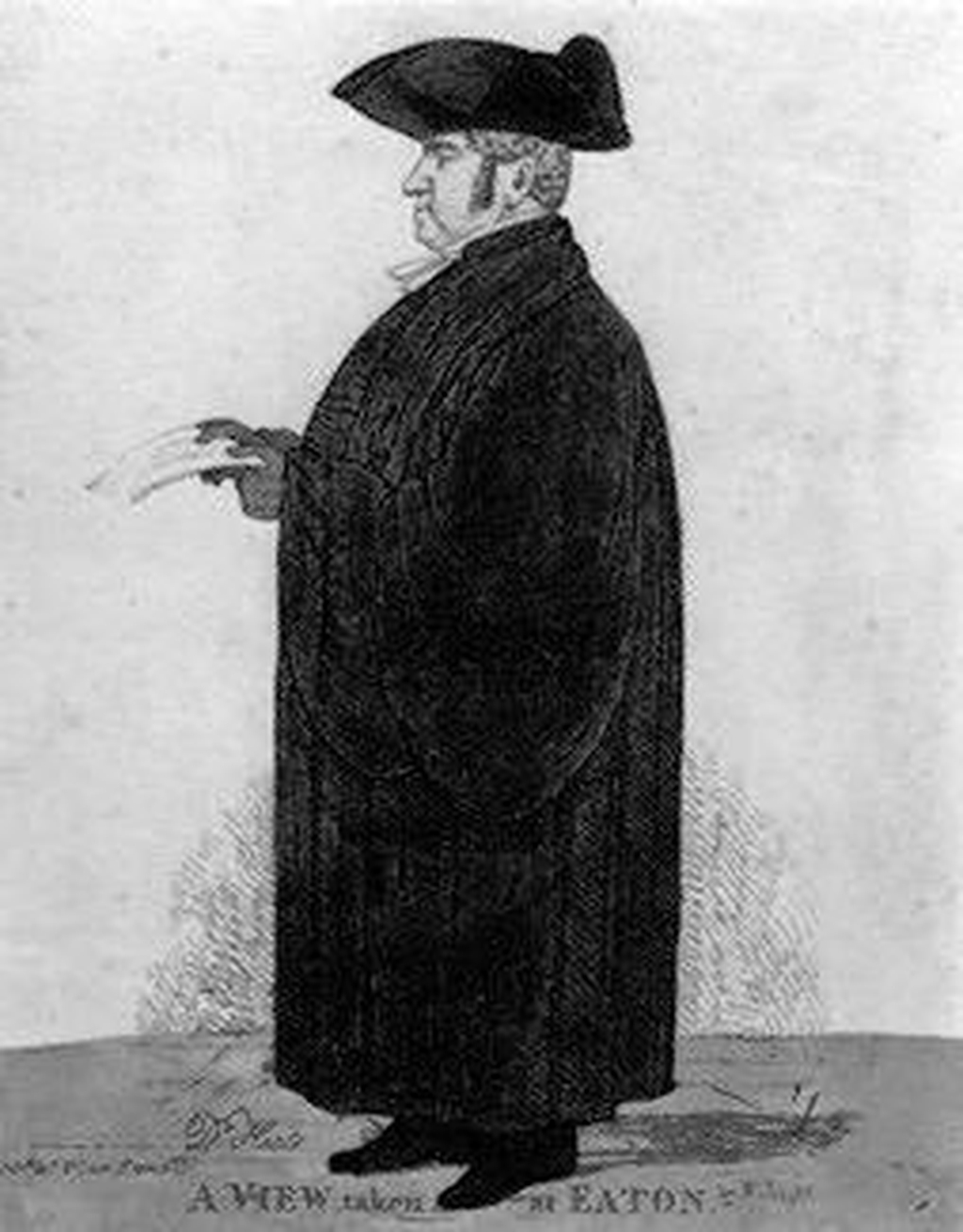 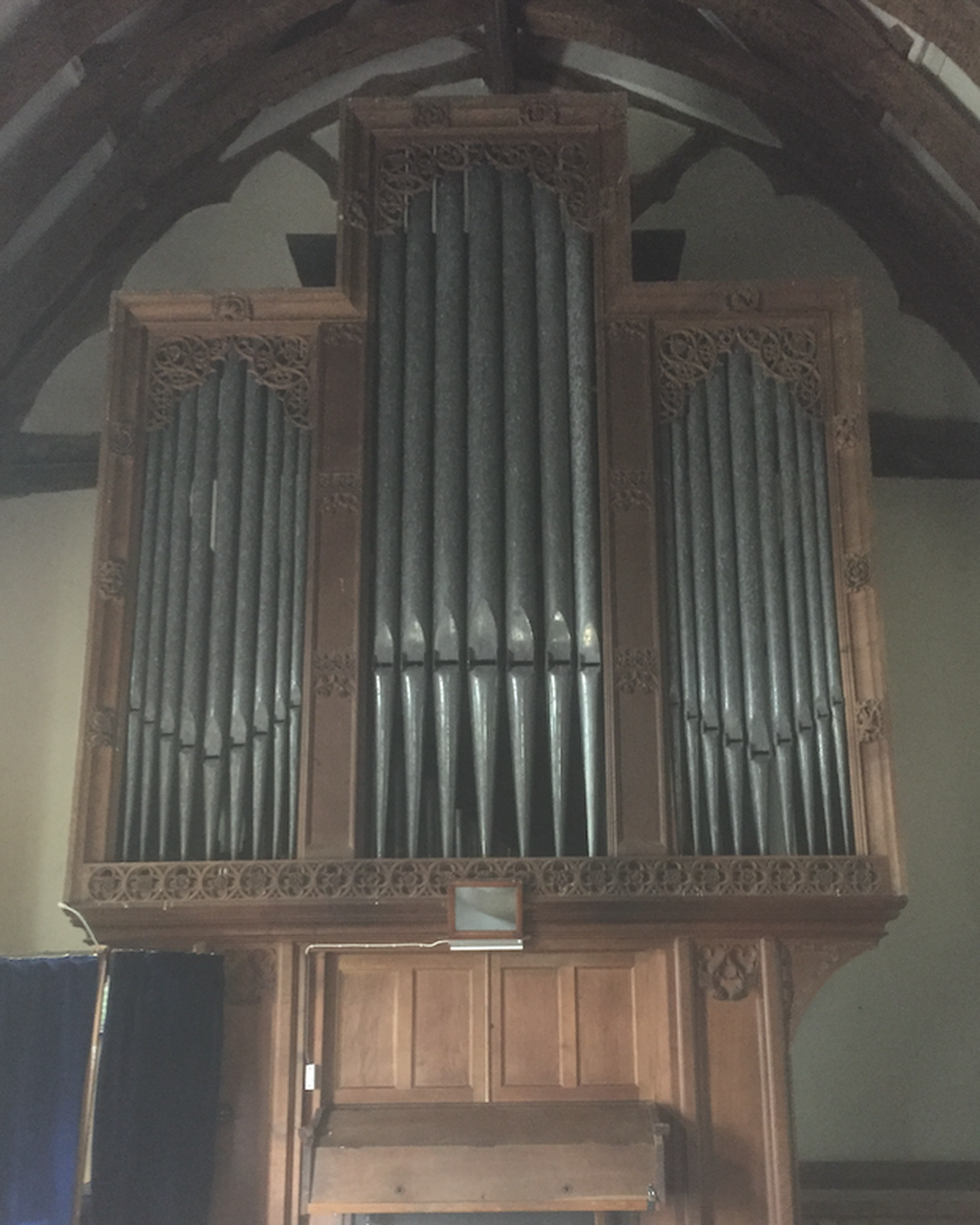 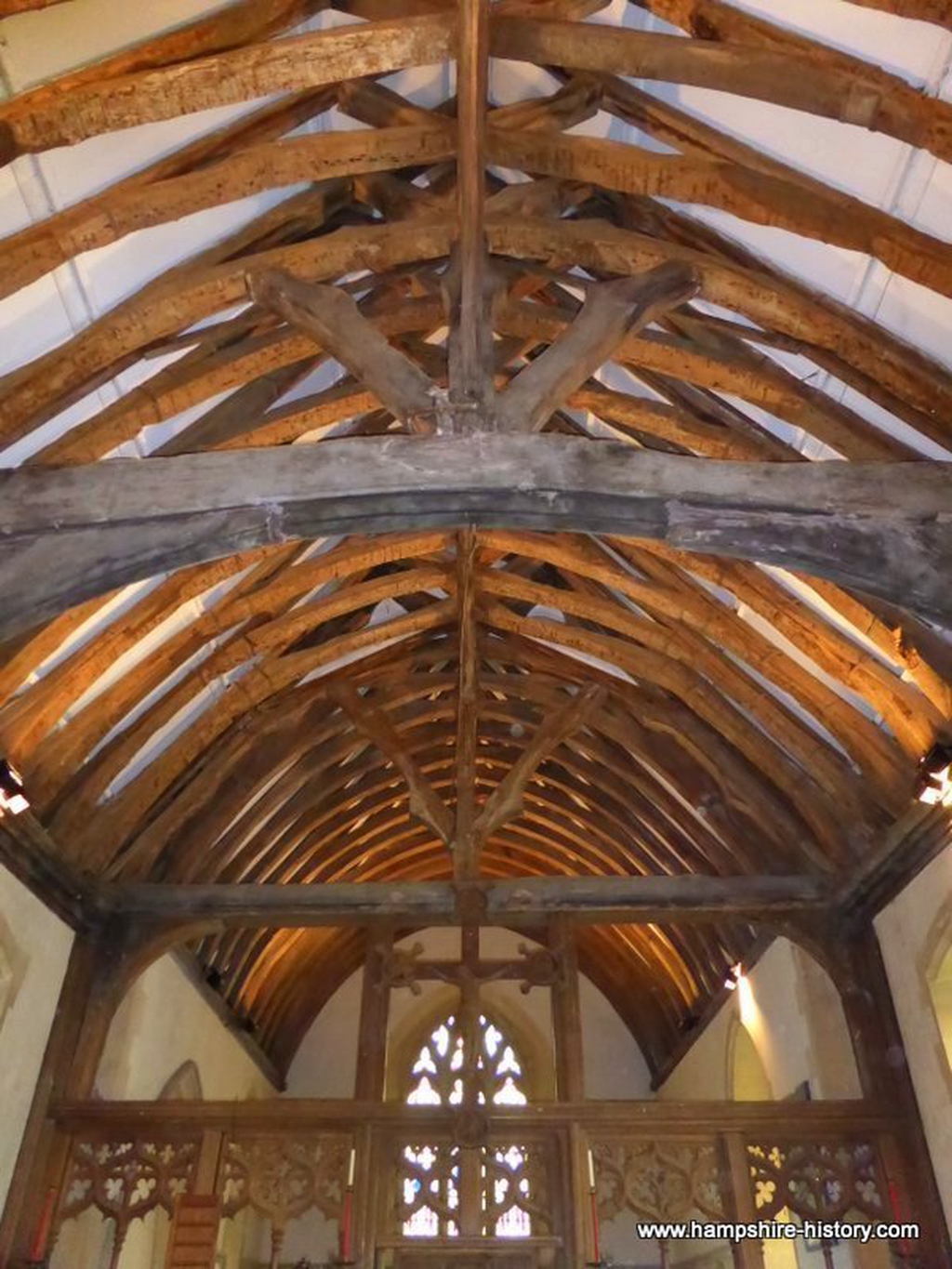 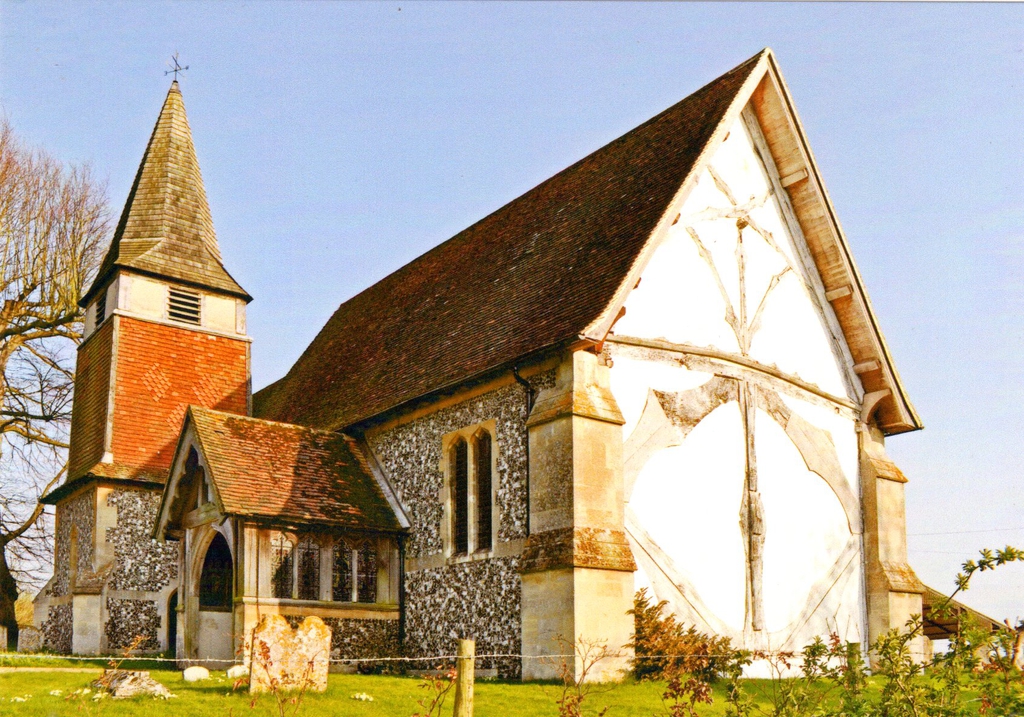 The first Rector of Hartley Wespall, Edmund de Bedwyn, was appointed in 1286. However, it is thought that the oldest parts of the church date from about 1330.

Although the church was largely rebuilt under the supervision of Revd JC Keate and George Gilbert Scott in 1868, the original massive beams in the half-timbered construction survive in the West Wall along with the internal roof structure. At that time the Bell Tower was moved from the West to the North side of the church.

‘The west wall of Hartley Wespall church incorporates a spectacular early 14th Century decorative timber frame. It is conceived in two stages. At the lower level, the massive timbers give the illusion of strength and solidity appropriate to their position in the base of the building. Above, in the gable of the roof, the framing is much lighter and lace-like.

Particularly satisfying throughout the design is the way that small decorative projections or cusps are used to punctuate the curving lines of the timbers. There is no clear documentary evidence to date the frame, but the sinus form of its timbers suggest that it was erected in about 1330. The intersection of the braces bears generic comparison to the great scissor arches erected to support the buckling central towers of Wells Cathedral in 1338 - 48.

This wall at Hartley Wespall, part of a frame extending throughout the churches is a reminder that timber never passed entirely out of use in church architecture as well as that timber buildings in the Middle Ages could be every bit as spectacular as their stone counterparts. Nevertheless, to a mediaeval audience, timber frame displays of this kind were most familiar in grand domestic buildings, such as halls.’ (Country Life 2016)

The windows showing traces of the 14th and 15th-century design, date from 1868. The chancel, which was rebuilt in memory of Dr. Keate, has at the north-west an arched opening to the tower, while on the south are a modern credence, aumbry, and tomb recess of 14th-century design. There is no chancel arch, but chancel and nave are separated by a fine modern screen with open traceried panels surmounted by a large cross, with medallions at the ends of the arms carved with the symbols of the four evangelists. The figure of Christ on the cross was added in 1923 as the village’s war memorial.

The nave is in three bays, with heavy story posts between each bay having filleted half-round shafts on the face, from the moulded capitals of which spring arched braces to the underside of cambered tie-beams. On the tie-beams are king-posts with struts, and the rafters are very heavy and have arched braces beneath. The tie-beam at the east of the nave is level and not cambered, and has formed the head of a wooden screen perhaps of much the same character as its modern successor. The struts and principals over it are cusped like those in the west wall of the nave. Both doors of the nave are original, but only on the north can the outer elevation be seen. It is a most interesting piece of detail, the doorway having a two-centred arch, with a label of the same section as that of the architrave of a rectangular frame in which it is set, and with which it mitres at the springing. The spandrels are filled in solid, the whole framing being extraordinarily massive.

The pulpit contains a little 17th-century carving, but the seating, fittings, &c., are all modern. There is a record that the church was re-seated in 1759 from the proceeds of Paice's Charity. The font is modern, in 12th-century style, with an arcade of interlacing arches, placed in the church by Dr. Keate in 1852.

In the chancel, under the modern recess in the North wall, is a raised tomb with a brass cross and marginal inscription to Dr. Keate (1773 - 1852)

(John Waspail sometime Patron of this Church, who went the way of all flesh on 20th November 1448, and Jane, his widow, relic of John Pakenham, who died on 20th May 1452 are buried here, upon whose souls may GOD have mercy, Amen

The tower contains three bells. The treble and second bear a plain cross, a shield of the three leopards of England, and the mark of Robert Crowch a London founder of c. 1440; the third was cast by Mears and Stainbank in 1883.

The parish of Hartley Wespall has attracted a number of distinguished churchmen over its long history, possibly through some notable Patrons:

Dean & Canons of Windsor 1482 to present

Duke of Wellington to present

Bishop of Winchester to present

1760 Frederick Keppel (Canon of Windsor, resigned to be Bishop of Exeter)

1762 Roger Huggate (Canon of Windsor. Buried under the present Vestry)

1796 John Fisher (Canon of Windsor. Resident until made Bishop of Exeter. Resigned on translation to Salisbury)

The church contains many memorials, of which a number are connected to the Keate family. This is perhaps not surprising as John Keate and his son John Charles Keate served as Rectors from 1824 to 1894. The rebuilding of the church in 1868, designed by George Gilbert Scott, was completed during the time of John Charles Keate.

(Windows moved from All Saints, Stratfield Turgis on its closure in 1975)

William Cookesley, formerly Curate of this parish and Catherine Elizabeth, his wife

The Durnford family occupied Hartley House between 1865 and 1937 when it was bought by Lt General Sir Bertie Fisher - see Memorial on South wall along with that to Noel Fisher.

Both are in memory of Revd John Charles Keate, Rector from 1848 to 1894. The Lych Gate given by Richard Durnford Esq. and the Reredos by the parishioners.

The World War 1 and 2 memorials near the porch entrance were moved on its closure from Stratfield Turgis Church.

In the churchyard, opposite the porch is the grave of Thomas Elliott. He was wounded in France in 1916 and died in hospital at the age of 18 in England after his return. His family, who were tailors, lived at Rose Cottage. The Commonwealth War Graves Commission maintain the headstone, renewing it in 2016. Next to the Lectern is the account of Thomas Elliott’s funeral, his regimental cane and his Memorial Plaque (‘Dead Man’s Penny’), given to all families of the fallen.

Next to these is a wooden plaque describing the Hartley Wespall War Memorial, erected in 1923.

The memorial to Captain Richard Durnford and Captain Robert Durnford, sons of Richard and Beatrice Durnford of Hartley House is on the South wall in the Chancel.

The fine organ by Hedgeland, with the casing by George Gilbert Scott, was installed in 1873. It has been maintained by JW Walker & Sons since 1916.

Comment by Harry Atkinson, an expert on Hedgeland organs: “I had to conclude that this is one of Hedgeland’s best instruments and needs to be preserved one way or another for future generations.”

After the 1868 rebuilding the outstanding collection of stained glass windows began to be installed. These were made by Burlison & Grylls, a company founded in 1868.

“John Burlison (1843-91) and Thomas John Grylls (1845-1913) both trained in the studios of Clayton & Bell. Grylls, whose father worked for the organ-makers, Walkers, had an early familiarity with church interiors, and was a particularly gifted draughtsman. The pair were encouraged to enter into partnership in 1868 by the architects.”

The beautiful images of the windows were prepared in 2010 by Peter Moore, the Great Great Grandson of John Grylls.

The Crucifixion, set between the Annunciation and the Nativity Chancel East

His first appointment after ordination in 1818 at the age of thirty was as Curate in Hartley Wespall, first to the Honourable and Reverend Alfred Harris, who appeared to be resident in Nice at this time, and then to Revd John Keate, Headmaster of Eton. It is presumed that most of the work in the parish fell to Broughton.

During his time in the parish he was noticed by the Duke of Wellington who materially assisted his prospects, including influence in Broughton being offered the Archdeaconry of New South Wales.

Broughton arrived in Sydney on 13 September 1829. He offered to resign half of his professional income (£2500) to support a second See, "an instance of self-devotion," said a contemporary writer, "with scarcely a parallel." The Government accepted only £500 a year from him.

Broughton was promptly made a member of both the colony's Legislative Council and Executive Council, assisting the Governor in the administration. He was granted a leave of absence and returned to England in 1834 to champion the cause of the church in Australia. The result was not as he expected; the Diocese of Australia was to be formed. He was enthroned Bishop of Australia, on 5 June 1836, in St James' Church, Sydney, as leader of the new Diocese of Australia just days after his arrival from England.

Broughton was a busy bishop and travelled widely, perhaps more so after his wife died in 1848. He travelled to England in late 1852 principally for missionary fund raising.

He died in London in February 1853 and is buried in Canterbury Cathedral.