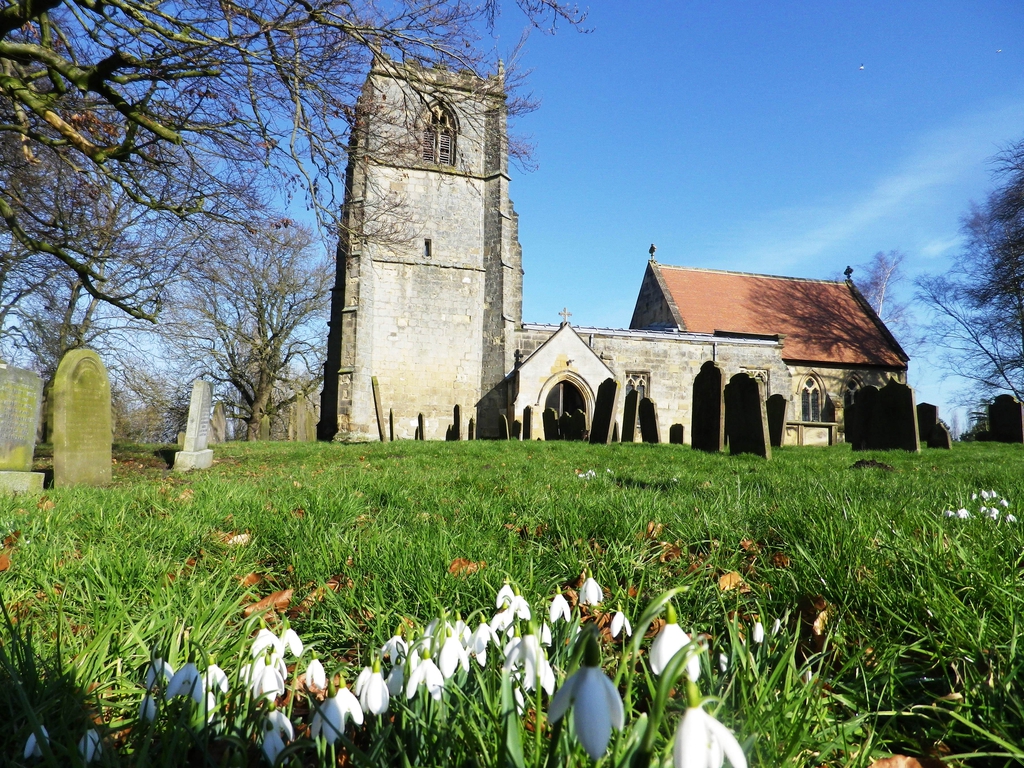 All Saints' Catton
Services and events
News and notices
About us
1a. This Week:
1b. Safeguarding
2. The church building
3. Your Child's Christening
4. Your Church Wedding
5. Parish Prayer Diary
6. York Diocesan News
7. Annual Meeting
Find us
Low Catton York
Get in touch
01759 372468
Facilities
More information
Edit this church

The main part of the church, built between 1150 and 1250, is a fine old English church approached by a small lane, beside which are four iron lamp standards commemorating Victoria's Diamond Jubilee. Set in a situation almost hidden behind tall trees, on a high bank to the River Derwent, the various influences present an unusual external appearance with the sturdy embattled tower at the west end of the southern aisle. The pitch of the chancel is much higher than that of the nave.

The original building was Norman, with cruciform. Little now remains; the north transept; the nave and aisles (which reflect interesting detailing of the period); the waterleaf capital of the east window; the respond of the south arch and the arch itself with two chambers. The exterior of the chancel is expressive but the outside conflicts with the earlier building. A round arch near the pulpit possibly belongs to an earlier period and some authorities believe that there is evidence of Saxon foundations.

The north arcade is mainly 13th century and each of the three piers differs in their design. The first is round; the second is quatrefoil and the third square with attached demy shafts. The arches are pointed and double chambered. The south door is of the same period, or later. In the south arcade the three bays giving way to the south western tower with its perpendicular top. The north precept and the aisle again are late 13th century and early 14th century. The south aisle has perpendicular windows.

The church was restored by George E. Street in 1866 (Street was an enthusiastic restorer of old churches). The very fine east window, the central panel of which depicts the crucifixion, is a fine example of William Morris' work. Morris originated a revival in architectural techniques and attempted to re-introduce the dying craft of English stained glass, bringing it to a peak not enjoyed for over 300 years. The window is considered to be one of the finest examples so this work in the north.

The belfry contains three splendid bells: (1) 1681, Samuel Smith, Elder of York; (2) 1719, (3) 1742 both by E. Seller of York. There is a hole in the wall found in the south wall of the choir, behind the Rector's desk, which gives occasion for much speculation. It is probable that the reason for it is to give some light at the desk which otherwise would be in deep shadow, but also could be considered to be a Hagioscope.

Most of the windows in the church are memorials of parishioners and benefactors and in the transept on the north side of the church there is a small window which has been much admired. When the church was restored in 1908, a small splayed window was found to have been built up on the west wall of the transept. The Sunday School children undertook the raising of funds to re-glaze it and it is now known as the "Children's Window." More recently the Sunday School placed beneath it a brass tablet to record the fact. <span style="font-size: 1rem;">The centre of the west window was damaged in 1941 by a land-mine and restoration was fully completed in 1958.</span>

The registers go back to 1592 and prior to 1868 there are entries in them of residents of Catton, Stamford Bridge and Scoreby and also of Kexby, which was once part of this parish. In the registers, High Catton is sometimes called "Upper Catton" and Low Catton is distinguished as "Nether Catton" for which one of the curators in charge used interchangeable to form "Xch Catton." There is a list of Rectors in the church which goes back to 1248 (Richard Dey Vill).

In 2011 £153,000 was spent on a new roof, other repairs and the restoration of two stained glass windows. Much of this was due to the generosity of English Heritage who gave £105,000 for the upkeep of this Grade 1 Listed Building. Other donations from local and national bodies, plus hard work by parishioners thankfully raised the rest.