Church of England Diocese of York Scrayingham with Leppington 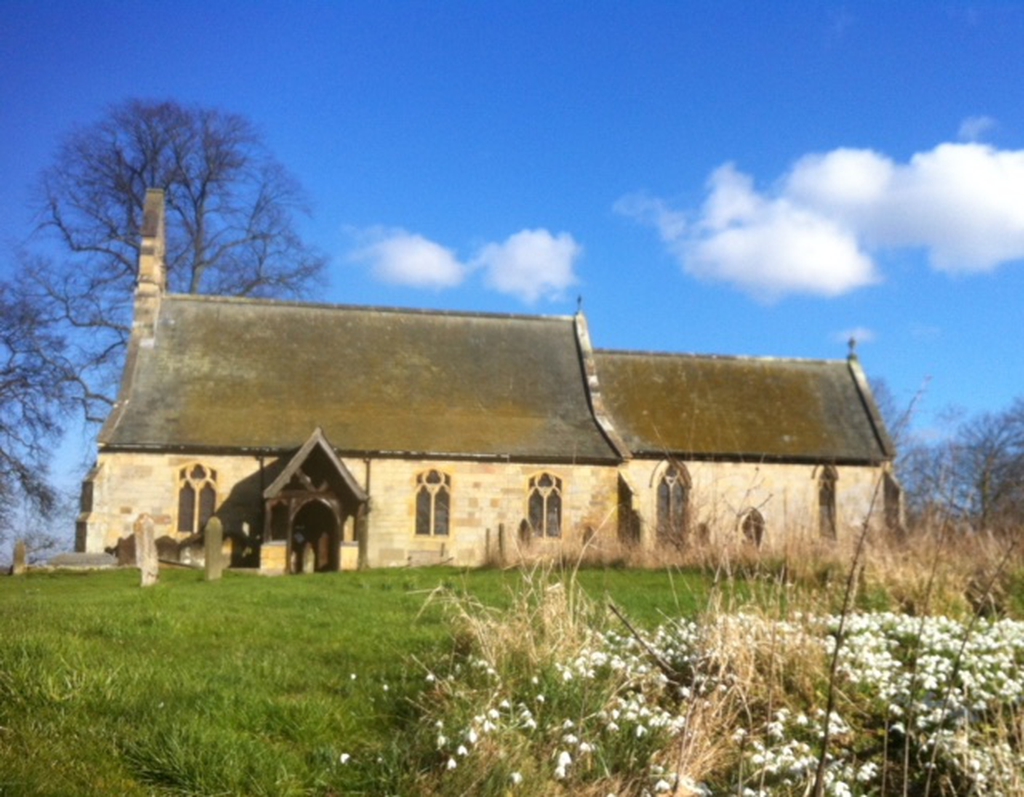 As you come down the path to the church, you will see the southern side of the church.  This was largely rebuilt in 1853 by a Colonel Chomley of Howsham hall at his own expense.  The South aisle was added for the Howsham people, who at that time walked to Scrayingham church along the river banks, having no church of their own.  However, in 1860, a church was built in the village of Howsham.  At the time of writing, we have been unable to find a drawing or plan of how the church looked prior to that time, and because the inside walls are plastered, any evidence that might be present above the south arcade is currently covered up.

The grave on the left hand side of the porch belongs to our local celebrity, George Hudson, known as the Railway King. George Hudson was born at Howsham in 1800. He is famous for investing in railways - from York to the West riding and to Newcastle. Through collaborating with George Stevenson, he eventually controlled 1000 miles of railway. He made a fortune and then lost it again through speculation and questionable dealings. He was three times mayor of York and also Member of Parliament for Sunderland. He died in 1871 and rests in the churchyard with other members of his family. Some of the stained glass windows in the church are memorials of the Hudson family.

Now walk round the western and northern part of the church.  The first thing you will notice is that it is made of huge stones, far bigger than those on the Victorian south wall.  These are made of massive grit stone blocks, many with Lewis holes, (see earlier) and are clearly re-used Roman material.

Look carefully at the north wall.  You will see two tiny blocked in windows fairly high up.  (There may have been a third which was removed when the westernmost Victorian lancet window was inserted.)

Peter Ryder has compared these to very similar windows at St Peter’s Monkwearmouth which date to the late 7thcentury.   If these are of a similar date, it would make the original stone church very early indeed, and one of the first Saxon buildings in the area that we know to be built in stone.

The width of the north wall confirms an early date.  Roughly speaking, the earlier the building, and the narrower the wall is likely to be.  (Perhaps as builders became more experienced, they realised that to build a stable high wall in stone, it needed to be wider than when building in wood.)  However, the north wall still stands intact, a tribute to the skill of the builders.

As you walk towards the chancel, and look up at the join between the chancel and the nave.  You will see a worn roof-line running diagonally down the wall from the top of the drainpipe.  This is evidence of the presence of a mysterious structure called a porticus.  A porticus was a common feature of Saxon churches, but their function is presently unclear. Were they used for high status burials or maybe a kind of ossuary such as sometimes found in continental churches today? Perhaps they housed a shrine or relics where
people could pray - again these are sometimes found today outside continental churches (or maybe it is just had a more prosaic use as a glorified church cupboard!). The truth is we simply do not know.

Before you go round to the East side of the church, turn around and look at the landscape.  You can see clearly how the churchyard and neighbouring old school are on a flat platform above the Derwent with a little stream running into it.  This is a typical position for an early church and Saxon manor house.  It is important to see the church in its landscape, and we look forward to the findings of further research.

The chancel has been rebuilt and extended, perhaps twice, certainly once in the 19th Century.  But you can still see some early stonework on both the north and the south sides, adjacent to the nave.

On the East and South walls, if you look carefully, you can see some faint markings of carved stones.  Clearly the Saxons weren’t the only ones to re-use old stone, and some of these stones, including a little sun-dial with a nail tucked into the centre of it on the South chancel wall, are mediaeval in origin.

Now you have completed a circuit of the church, go inside.  You will see that the interior has been plastered, and at present it is impossible to find any clues as to the early origin of the church from the nave and the chancel. However, in front of you there is a large chandelier, given to the church by Sir Tatton Sykes of Sledmere.  There is also a small painting of a church (now demolished) at Leppington.

Whose foot is this?

Not on view, but in the tiny vestry are some stones built into the wall.  These were probably moved from their site in the Victorian re-build.  Most of these are medieval grave covers, but there is one item that dates back to the church’s origins.  This is the corner of a larger carving.  All that remains is a foot, and some drapery.

Is it a Christ in Majesty, or perhaps an angel, just alighting on the earth?  It presently has experts puzzled, but Professor Rosemary Cramp, from Durham University, thinks that a date of around 800 is likely.   So it is probable that our church predates this.

What did the Church look like when it was first built?

Fortunately, we have a good clue from another mysterious Northumbrian Saxon Church:  St John’s Escomb in County Durham has virtually identical dimensions to St Peter and St Paul’s, and dates to the same period, that is, before the Vikings first came to our
land.  With its little windows, remains of a porticus on the north wall, a stubby chancel and re-used Roman Stone, Escomb is virtually an identical twin to our church. Both churches were built during the flowering of Saxon art and craft.  I cannot imagine that either church would be furnished as plainly as they are today.  The recent discovery of the Staffordshire hoard and the breath-taking Lindisfarne Gospels show us the rich skills, craftsmanship, and love of colour of the early Saxon Christians.  To aid their worship of the King of Kings, we can imagine painted carvings, beautiful golden crosses, communion plate and embroidered vestments adorning our simple little church.  Maybe, as in St Paul’s Jarrow, there was even stained glass in the windows.  The worship would have been in Latin, with many Psalms sung in the new plainchant.

In contrast, the monks and priests who served the village and its Lord would have lived simple and austere lives. Their time would have been spent giving glory to God in regular worship, and going about teaching and preaching by word and example, the love of God to their neighbours.

The church still serves the local community as it has since it was built.  It is currently part of the Stamford Bridge Group of parishes, and has services once a month, including quarterly services celebrating the Saxon Saints in the modern Celtic Tradition.  You will find details of services, and some suggestions for prayers in the church.

We are particularly indebted to Peter Ryder, Architectural Historian, and expert on church architecture, who discovered the early origins of the building, and draw heavily on his report on the church, dated June 2009.  We are also grateful to the many conversations and emails had with other experts in this field. A more comprehensive version of this article including historical background is available from the Revd Fran Wakefield.