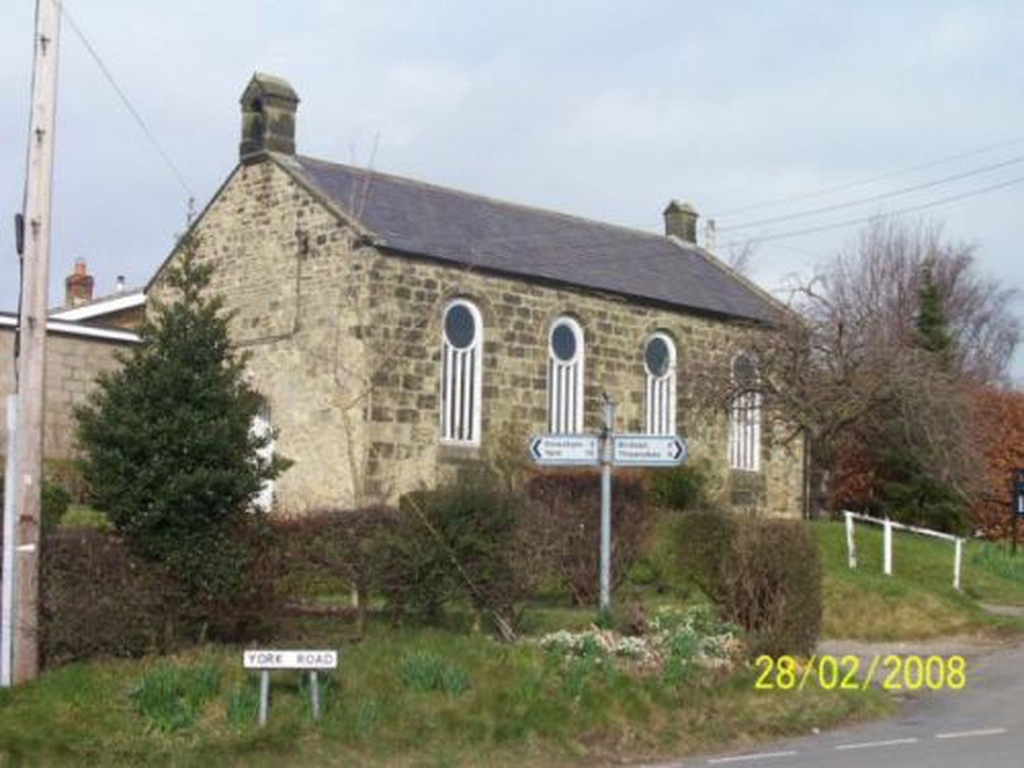 Originally the church was the village school until the present one was built. The old school building which belonged to the Church of England became the chapel-of-ease to Acklam church as Leavening was in the parish of Acklam. In 1965 it was rededicated by the Bishop of Selby, to become The Venerable Bede
In Christian history Leavening has always been paired with Acklam, in the Acklam-cum-Leavening Parish. The church was for a long time located in Acklam, Leavening only getting a chapel-of-ease in 1850. Therefore all Leavenings marriages, baptisms and funerals were carried out in Acklam. The Domesday Book in 1086 lists Acklam as having "A church" (no mention of a priest as well), whereas Kirkham is mentioned as "A church is there and a priest". This suggests that Acklam only warranted a visiting priest.
After the Domesday Book entry, the next mention of a church in Acklam comes in the time of the reign of King Stephen, when the Scots were raiding southwards. Herbert the Chamberlain to the King of Scotland was given land in Acklam and Leavening. His chief tenants the Scures family gave the church to Thornton Abbey at Barrow-on-Humber. This was confirmed by Herbert's son Stephen, at around 1154. Difficult to look after from across the Humber, so it was exchanged with the Archbishop of York for nearer churches in Holderness in 1221-22. A record of priests from Alexander de Wakefield in 1334 to Edward Bradley in 1680 still exists. Acklam being a small church, it was probably farmed out to chaplains by absentee priests. Chaplains were the apprentices and had to exist on a very low wage, while the benefits and tithes went to the priests. It is possible that Alexander de Wakefield was one of these priests who benefited. In 1334 there is mention of Alexander's selling a messuage, 3 tofts and 13 bovates of land in Acklam and Leavening to Roger and Isobel de Trussebut.
Acklam was minor parish with a regular posting chaplains until the early 16th century, when William Melton (the Chancellor of Yorkminster from 1495), had his country residence there. It is then that Acklam would have both a vicar (Edmund Cooke) and a chaplain (Robert Ellerton) residing in the parish.
The effect of the Dissolution of the Monasteries by Henry VIII to the area was that the monks of Kirkham Priory gave up their manor and lands in Leavening.

Methodism began to make its mark in the late 18th century. Its founder John Wesley preached in York in 1743. Their first meetings were in their own houses or a convenient barn until the first Wesleyan chapel at Acklam was built in 1794. Leavening did not get its own chapel until 1824. By then Methodism had sundered and the Primitive Methodists "The Ranters" built theirs in Leavening four years earlier than the Wesleyans.
Congregations sizes at these times were for Acklam church a yearly average of 40, and in Leavening 60. The Wesleyan Methodists had similar figures. The Primitive Methodists however could hold three services every Sunday, some services holding over a hundred worshippers. The Wesleyan chapel in Leavening is still in use now, but the Primitive Methodist chapel was eventually closed and turned into a barn. This was later demolished and a bungalow not occupies the site.
In 1850 a Church School was built in Leavening and was licensed to be used as a chap-el-of ease to Acklam church. In 1965 it was rededicated The Venerable Bede and is a church in its own right. Acklam and Leavening are two churches in one Parish. There are two Churchwardens as usual; by tradition each village supplies one warden. The PCC was composed of members from both churches.

The Vicar, Rev Michael Sinclair is Rector of the Parish of West Buckrose and is responsible for eight churches.