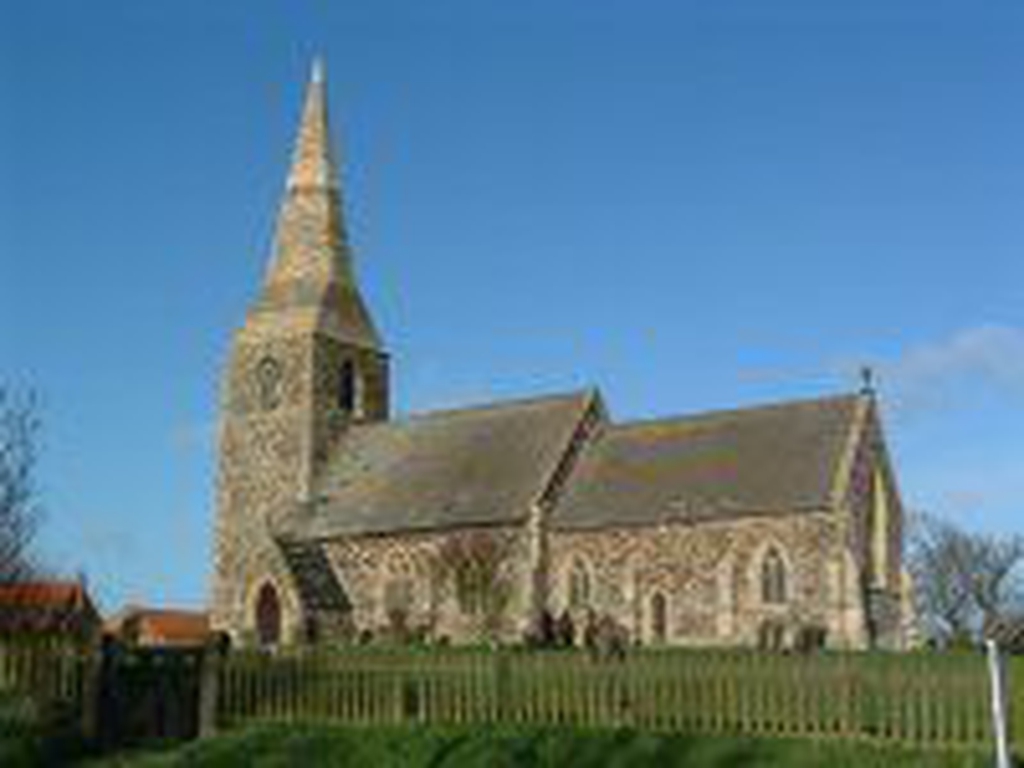 All Saints, Mappleton
Services and events
News and notices
About us
Find us
Main Road Mappleton Hornsea
Get in touch
(01964) 534580
Facilities
More information
Edit this Church

The village of Mappleton is mentioned in the Domesday book, and it is belived that a church may have existed in 1086. In 1115 Mappleton was granted Priory (later Abbey) of Aumale (Albermarle) at Rouen, France. In 1228 the Abbey of Aumale ceded the rectory to the Archbishop of York, and in 1230 it became part of the Deaconry of the East Riding of Yorkshire.

The church building is of cobble, with stone quoins and spire, being largely rebuilt in 1855-56, although retaining the earlier west tower. The spire was added to the tower at the time of rebuilding. It can be seen that the latter consists of two bands of colour, the material for this reputedly having been salvaged from a ship wrecked off the shore at Mappleton. In recent years the spire was found to be in a dangerous state. Whilst the building work was carried outduring 2002-03, the church was partially closed, but in the autumn of 2003 the reopening of the chancel marked the completion of the work.
During the second world war all the windows of the church received some damage, most of which occured when, at 11pm on the 27th August 1940, a bomb severely damaged a cottage which was situated directly opposite, on the present site of Maple garage. The windows were repaired in 1954, retaining as much of the original glass as possible.

In 1855 the roofs of the chancel and nave were raised. The tracery of the chancel windows suggest the style of circa 1300, but the east window is completely Victorian in origin, the work being carried out by E T Dowse in the late nineteenth century. In the south east wall of the chancel can be seen the unusual feature of a piscina incorporated into a windowsill

The present north arcade of the church is completely Victorian, although with windows in perpendicular style. The side of the original church held the private chapel of the Brough family, whose residence was the nearby Rolston Hall. The large white & grey marble tomb-chest is in memory of several members of the Brough family.

We are open all day  Wednesdays to Sundays