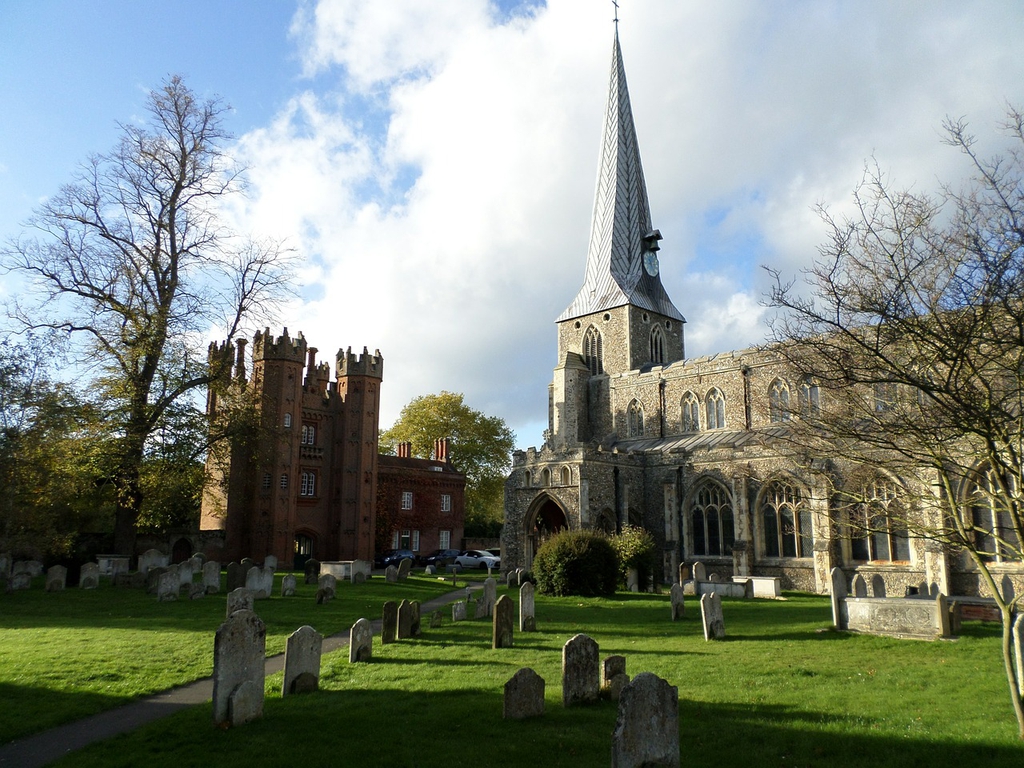 St Mary’s church’s earliest parts date from medieval times. It has a late 13th-century or early 14th-century tower and late 14th-century aisles. The church was almost wholly reworked in the 15th century, when the arcades were rebuilt, and the clerestory, south porch and northeast vestry added. At this time also the whole building, except for the tower, was re-fenestrated. In the 19th century and early 20th century the church was extensively restored.

The church is constructed of flint rubble with stone dressings and has leaded roofs and spire. It has an aisled nave and chancel, a western tower, a south porch and a two-storey north vestry. On 26 April 1950 the church was designated a Grade1 listed building. The principal reasons for which were:

- Interesting fittings include a good font, screens and memorial brass.

The last major restoration took place in the 1800’s. Recent modifications are the addition of wheelchair toilet facilities, having fitted access ramps wherever needed though out the building over the past few years.

St Mary’s is a large and long church in typically East Anglian style. The three-stage western tower may be late 12th century in origin, but was rebuilt in the later 13th or early 14th century. It has a west door and trefoiled lancets in the lowest stage, and Y-tracery windows in the second stage and bell stage. There is a polygonal stair turret, but this does not rise the whole height of the tower.

The early 14th century broach spire, 21.6metres (71ft) rising from the stone tower to a total height of 41metres (135ft), is probably the earliest surviving spire in Suffolk. The spire has a clock with a bell on its eastern face. The bell was cast in 1280 and is believed to be Suffolk’s oldest inscribed bell. The aisles and nave clerestory are embattled.

The aisles, of 14th-century origin and refenestrated in the 15th century, have large perpendicular windows. The windows have vertical tracery in a consistent, but different, pattern on each side. The nave clerestory has pairs of 15th-century two-light windows. In the eastern gable of the nave there is a round window.

The chancel clerestory is similar, but has a plain parapet. The south chancel chapel continues the south aisle. The second window from the east steps up over a 15th-century priest's door. The north chancel chapel terminates in a two storied vestry at the north east which has an embattled, low pitched roof and two-light windows with square frames. The early 15th century porch at the south of the church is embattled and has a low pitched roof. Above the large outer opening is a row of three niches. Internally the porch has the remains of vault springers. The south door, dating from the 15th century, has multiple continuous mouldings. The north aisle door dates from the 14th century and has weathered headstops.

The church has a large and spacious interior, with broad arcades and a chancel arch. The north wall has a painting of the head of Christ by Maggi Hambling.

Simon Jenkins writes: "Hadleigh suffered sorely from a Dowsing visitation. In February 1644 he 'brake down thirty superstitious pictures and gave orders for taking down the rest which were about seventy’...

The chancel has a fine bench-end which may represent a wolf, but which has cloven feet and the head of St Edmund in its jaws. The Perpendicular font, an octagonal structure with delicate blind niches and angels, is described by Jenkins as "the best work in the church". It has a fine modern cover, of 1925, by Charles Spooner.

The present building has seen centuries of development and more recently the new nave altar (1996) and the social area (2002). The latter enables the church to offer a welcoming focal point for the community as well as recalling the mediaeval church’s tradition of hospitality.

The font dates from 1350 and the cover from 1926 - a memorial to John Overall who was born in Hadleigh. He assisted in the writing of the King James Bible, was a Dean of St Paul’s Cathedral in 1670 and later a bishop. The statue of John the baptist was added in 2007 in memory of Dean Carter.

Plans are in place to increase its flexibility in organizing the church for a larger variety of events, as well as offering attractive facilities to groups wishing to use the church. The majority of the Victorian pews have recently been replaced with high quality chairs. Twenty pews have been restored and will form the seating in the reordered Lady Chapel.

The foundation of the church at Hadleigh has been strongly associated with Danish leader Guthrum who made peace with King Alfred the Great in 878. Guhrum died and was buried in Hadleigh in 890. He may have built the original Saxon church at this site, traces of which were revealed in the churchyard to the south of the porch, in 1829 and in 1984. There is no real evidence, however, that Guthrum was the founder of the church. In the Doomsday Book there is mention of a church at “Hetlega” being owned by Archbishop Lanfranc of Canturbury.

The Saxon church was replaced about this time. The earliest fabric in the present church is the tower, the lower part of which is late 12th century or early 13th century. The upper stages of the tower grew through the 13th century, culminating in the spire, although this was much refurbished on 1926.

By the 14th century the church was already very large and the aisle walls date from this time. In the 15th century it was greatly rebuilt, with money from the cloth trade, and the church contained chantry altars for at least five guilds.

The entire church was refurnished in the post medieval period, and had a double decker pulpit, box pews and a west gallery. The church was extensively restored in the 19th century and this included removal, in 1855, of the two-storied porch at the south east. The tower had a wooden parapet which was also removed and replaced in stone. This was removed in 1926.