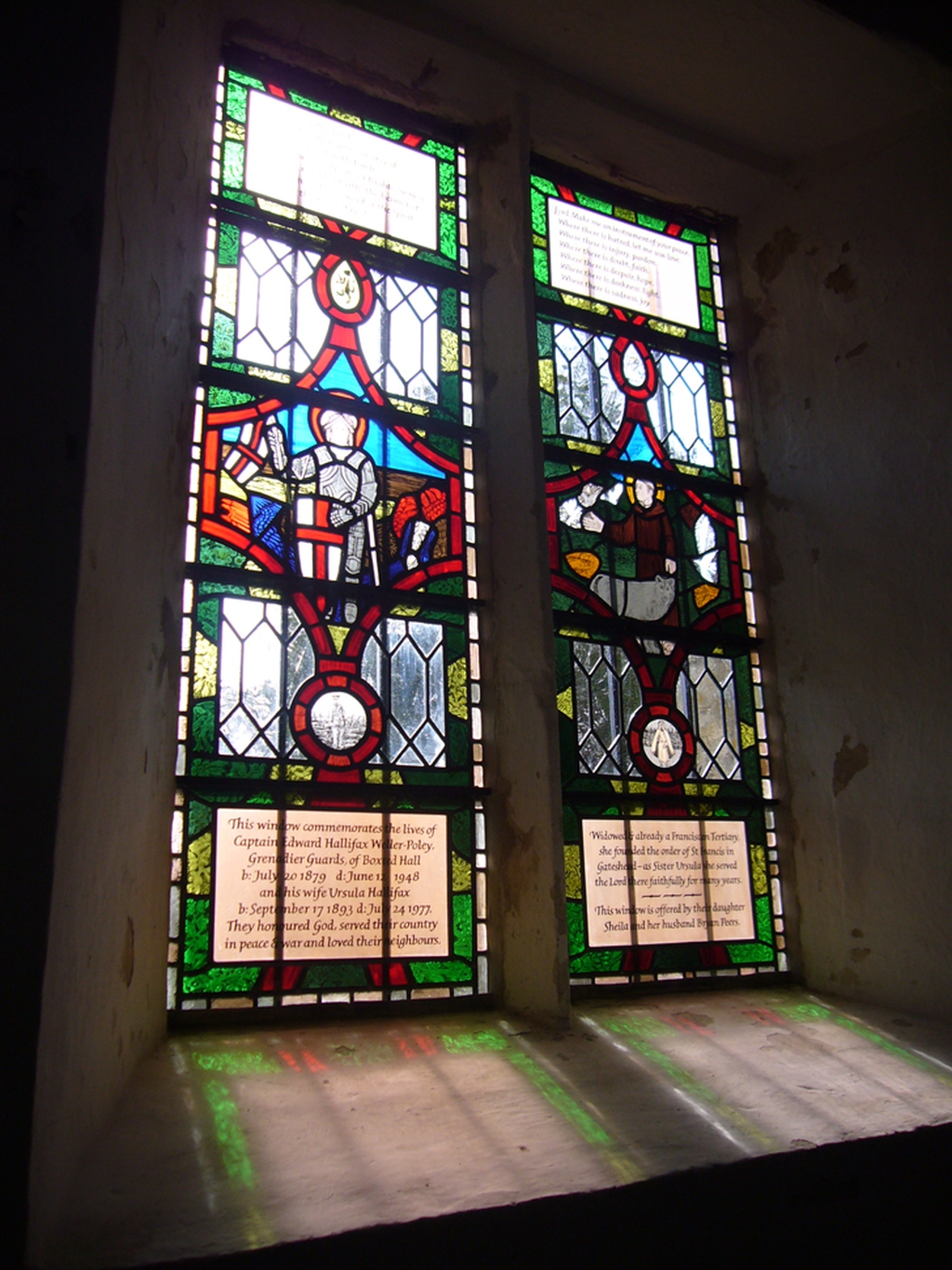 The Church of the Holy Trinity, Boxted is situated on a hill to the west of Boxted Hall, the seat of the Poley and Weller-Poley family for 600 years. The parkland between the Hall and Church was described in 1631 as "the church hill lying up to the church with the warren of Conyes". There was no church recorded in the Domesday Book (1086) and it is possible that the building was erected as a chapel-of-ease to Hartest. The livings of Hartest and Boxted have been held together since 1224. Today the incumbent is also responsible for Glemsford, Stanstead and Somerton.

The narrow north aisle and the nave date from the early and late Perpendicular period (1340-1540), the tower was under construction 1440-57, the chancel was enlarged and rebuilt, and the Poley Chapel or 'Burying Place" added between 1629-57, the south porch was rebuilt in 1885.

The earlier church consisted of a nave and chancel, with a north aisle, added in the 14th. century. The nave was rebuilt, or heightened and reroofed around 1500. Money was left to the "ledyng of the churche" in 1505, a date which fits the late Perpendicular clerestory, and the cambered tie-beam roof.

After 1530 the east wall over the chancel arch was filled with a painting of the Doom or Last Judgement. Money was left for "making the doum" in 1530 and it was no doubt whitewashed over at the Reformation. On the roof above the Doom was written "Come to judgement (missing) accursed into fire eternal". Below the doom would have stood the Rood Screen with its figures of St. John, Jesus and Mary on the loft. The spiral staircase to give access to the loft survives in the north-east corner. The eastern bay of the roof was painted as a canopy of honour, and survived until 1885.

During the 1885 restoration the chancel arch was removed and the three arched wooden openings constructed. Before the Reformation there were statues of the Virgin Mary, Holy Trinity and St. Margaret, the latter of which may have been in the north aisle. These were all removed in the reign of Edward VI (1547-1553). Further "church cleansing" took place in 1644 during the Civil War, when William Dowsing removed 'W superstitious pictures" of saints in stained glass.

The pulpit has blank arches, and the sounding board dated 1618, has turned pendants.

The Pulpit The box pews and benches date from the 1852-53 restoration, although four 16th. century benches survive. The cambered tie beam roof is richly carved with running foliage designs, each bay being individually designed. The small angels on the wall posts date from 1885, and further repairs were carried out in 1990.

The chancel was rebuilt or enlarged in the mid 17th century, probably when the Poley Chapel was erected between 1629 and 1658. The rare 17th. century hammerbeam roof has many similar details to the nave roof at Hartest, constructed in 1652. The Communion Table and three-sided rails form part of the same re-ordering of the chancel.

A palimpsest brass (one re-using the reverse of an earlier brass) to Richard Poley (1468-1547) and his wife Ann, on the north side of the chancel, is the oldest surviving Poley monument. There are also many floorstones and seven hatchments (1756-1849) to the Poley and Weller-Poley family. On the south side is the tomb chest with rare oak effigies of William Poley (d. 1587) and Alice his wife (d. 1577). He is dressed in armour, with his head on a helmet. She has a prayer book with the arms of Poley and Shae, and rests on a pillow inscribed 'Blessed are the dead who die in the Lord, A.P. 1579. The figures were restored and the black paint removed from the stonework in 1992.

The East window glass is by William. Aikinan, with vignettes of the Church and Hall with rabbits on the grass between, which are a reminder of the earlier warren nearby. The stonework and tracery of the window are of the same date.

The brick chapel was built between the death of Sir John Poley in 1629 and 1658, when it was described as the "New Chappell" in the will of Sir William Poley. An open book and double scroll on the west wall traces the descent of the family from the 14th. to the 20th. centuries. The magnificent alabaster monuments are to Sir John Poley, (1558-1638) of Wormegay in Norfolk, and his wife Abigail.

The inscription describes Sir John as "as man famous for his bravery in arms and for military skills to be reckoned amongst the first commanders". He served under Henry IV of France for three years, and King Christian of Denmark for 22 years. Both effigies were deaths. Sir John's is late erected long after their 17th century by John Sir John Poky Bushnell, and was restored in 1986.

Dame Abigail died in 1652, but her monument was not erected until 1725 and is believed to be the last English monument made of alabaster. Sir John has a golden frog earring, the explanation for which has baffled, and will probably continue to baffle, historians for generations. The east window is by William Aikmian in 1936.

On the floor are two 13th century coffins and the shaft of a pillar piscina.

The narrow early perpendicular north aisle is probably the oldest surviving part of the church. The richly carved roof dates from the early 16th. century, and money was left for the "reparacion of the ylde " in 1508. In the mid 17th. century the eastern bay was converted into the Poley famliy pew, with a screen towards the nave. A second pew for the hall servants, occupied by the organ since 1960, was erected in 1853-4. Before the construction of the pew, the floor was level with the nave. Before the building of the Poley Chapel there was an east wall to the aisle, with an altar, the piscina of which survives on the south side.

The earlier church did not have a tower, and bequests were made for "the building of the new tower". These included one by Robert Foster in 1440 who directed that his wife "shall find the wages and the food of the heweys (stone dressers) and leggers (scaff-olders) of the new tower of Boxted as long as they shall be building it".

The tower housed four bells, two of which were sold in 1762. The remaining treble bell is 17th. century, and the tenor was cast by Thomas Newman in 1738. They were both restored at Whitechapel in 1972.

The vestry, staircase and gallery date from 1885. Outside on the south-east buttress is a well preserved semi-circular scratch, or mass dial. The hole at the top would have held a gnoman, the shadow of which would indicate the hours of church services.