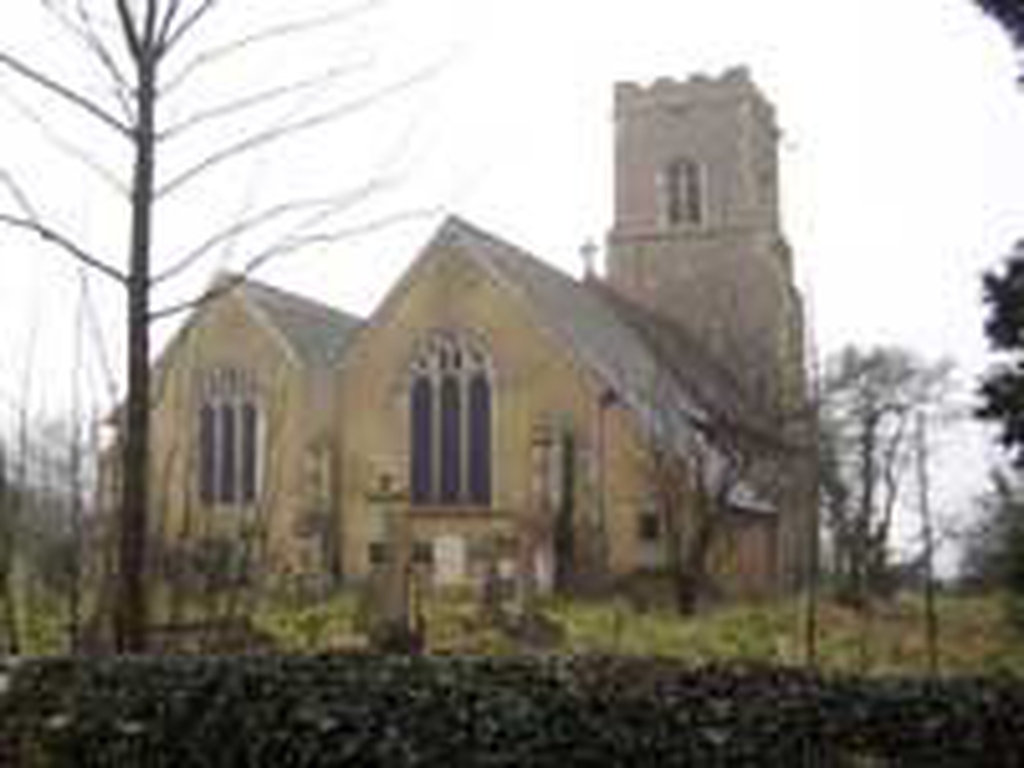 This is an attractive small stone and flint church in the peaceful setting of Upper Somerton, and it overlooks Hawkedon and delightful Suffolk countryside. Research has been unable to reveal exactly when and by whom it was built. It is not listed in the Domesday Survey of Somerton, but it has got a Norman nave and a Norman doorway, now blocked up. There does however exist a list of Rectors dating from 1332. Over the centuries, additions and alterations have been made to the fabric and furnishings and its antiquity blends comfortably with the current life of the hamlet as the twentieth century approaches its last decade. St. Margaret's has a Chancel with the unusual addition of a South Chapel, similar in size and built alongside. The Nave has a south entrance Porch and at the western end is the square Belfrey Tower approached through a Gothic arch. THE INTERIOR The Chancel (25A" x 14'5") is late Early English and the east window above the altar has perpendicular tracery. The window itself is of Christ in Majesty and was made in 1890 by Kemp and Co. It, like the other beautiful stained glass windows in the church was an in memoriam gift. This one commemorates Joseph Eaton Hale (died 1874), Joseph John Frost Hale (died 1881), and Thomas Prosser Hale (died 1897). Also, on the north side there is a twin light window in memory of Thomas Prosser Hale of Somerton Hall. On the north side, between these windows, is a triangular headed medieval doorway which once led to an adjoining brick built vestry, but which is now blocked up. This latter is now approached only through its outside doorway and houses garden equipment. On the south side is a fine late 13th century arcade of two segmented arches beside which is a pillared squint with a piscina. The Communion rails are believed to be Jacobean as is the simple holy table. 'Re choir stalls are of deal.

There is a rather touching memorial within the chancel rails to William Blundell Esq. aged just 19

" Blessed he was with beauty of body and ornaments of mind, and though young a pattern for Piety, Chastity and Charity to young and old, beloved of all but most dearly of his parents, expecially his father, Sir Francis Blundell, Bart. Patron of this church."

The South Chapel is surprisingly spacious. It is early 14th Century in style and appears to have its original roof. The east window is a Perpendicular insertion but has early 14th Century shafting preserved inside. On the south side one window is segment headed and the other cusped lancet. Lower down a piscina has been built into this wall. On the west wall is a fine old oak door with, above it, a two light window. Suspended on the east wait is a rather faded George Ill coat of arms. In the church notes of 1814 it is recorded that the chapel had been enclosed from the chancel and used as a school room. In 1827 yet another change had taken place and it had become a vestry. The Nave is 30' 7 long and 16' 2" wide. It is Norman but now with a 19th Century roof. It has one aisle. . Later alterations have provided a Perpendicular window on the north.side and two 14th Century windows on the south. On the north side also is a Norman doorway, now blocked up. A Jacobean gated rail with turned balusters separates the Chancel and the Nave. There is a fine hexagonal pulpit and a 19th Century lectern. The carved pews are of deal.

The South Porch, is late perpandicular built of stone and flint with some, thin red brick It has a long stone bench seat and small window, on either side and still has its original roof.

The Towcer is 16th Century. A lofty Gothic ,arch separates it from the Nave. The two light west window is in memory of Elizabeth Sawyer daughter of Joseph Hale of Somerton Hall, and was given by her son Walter James Sawyer.

The tiled floor of the tower is on a slightly higher level than that of the Nave and the edge of it and the extention stone plinth provide the platform, on which rests the font. The church is fortunate in still having this 16th century hexagnol stone font decorated with shields in cusped panels. (During the Civil War and afterwards many churches lost their furnishings. On the floor at the base of the font is the inscription in tiles "Suffer little children to come unto me".

Behind a small padlocked door is a narrow winding stairway leading to the Belfrey.

There are four bells

W.L. stands for William Land who was the actual founder.

A SECOND BELL (5cwt in might) dated 1573 It has similar Latin inscription but without the WL so the founder was Stephan Tonni of Bury St. Edmunds

It is almost as though the founder gave each bell a personality.

'There is some variation in the construction of the walls, presumably dependent on the materials to hand at the time. The walls of the South Chapel are quite different from the rest, as at regular intervals from roof to base there are double rows of thin red brick tiles. Low down in the east wall close to the Nave the remains of a 13th Century sepulchral slab have been built into it. The east walls of Nave and South Chapel have been rendered, presumably over the original Suffolk flint, and the eaves are edged with scalloped barge boarding. Buttresses support the north, east and south walls of the church and the flat one on the south wall is Norman. The tower is surmounted by an embattled parapet, has decorated bell openings and some fearsome devil gargoyles. 7lere are two flint chequered courses, one near the top and one towards the base. It is strengthened by angled buttresses. One story handed down in the hamlet through the generations is that the six beech trees on the left as one enters the churchyard mark the last resting place of those in the middle ages who died of plague or pestilence. 'Me trees are reputed to have been planted so that their graves would never he disturbed.

The name of this church has varied. In some 18th Century records it was referred to as the Parish Church of Somerton, which of course it still is but in 1855 in 'Architectural Notes on Churches and other Medieval Buildings of Suffolk it is clearly referred to as St. Margaret's. Although research has failed to produce any record of an official change of name, various documents and publications in this century have used the title "All Saints". The theory has been advanced that some previous Rector may have indulged in an unofficial name change because St. Margaret was not a recognised saint and so he decided to play safe and incorporate all the saints. However in Somerton St. Margaret has finally won and she is back with us. Although there is no historical evidence of her existence she became nevertheless very popular in the late Middle Ages. Legend has it that she was the daughter of a heathen priest at Antioch (on the River Orontis in modern Turkey). Because she was converted to Christianity, her father turned, her out of their home, and she supported herself by becoming a shepherdess. 9 Olybrius who was governor of Antioch wished to marry or seduce her but she refused. As a result she was tortured. Finally she, and those whom she had converted were beheaded in the persecution under Diocletian. Her popularity can be accounted for by the fact that she promised protection to those who prayed for her aid, to women in childbirth, and to those near death.

The name Babergh was current at the time of the Domesday Survey as Babergh Two Hundreds. Somerton's Anglo Saxon spelling was SOMERTUN meaning Summer town. In the Domesday survey it appears as SOMERLEDETUNA.

One of the translated paragraphs is:-

"Roger holds Somerton as a manor One carucate of land in the jurisdiction of St. Edmunds.

(A "carucate" is a measure of land under the feudal system and varies with the nature of the soil. It is as much land as can be ploughed by a team of 8 oxen with 1 plough in a year). At this time the Somerton manor was held by the son of the Chamberlain to William the Conqueror. (Two of the chamberlain's duties were to provide rushes for the King's sleeping chamber and also a bed of down for him). By the time of Richard 1 the manor was the property of Richard Neville. Early in the 13th Century Thomas de Burgo was lord of the Manor. During the 15th Century Sir John de Ingoldsthorpe was lord of the Manor and one of his daughters, Isobel, became the wife of Sir John Neville, third son of Richard Neville, Earl of Salisbury, brother of Warwick the Kingmaker, who was involved in the Wars of the Roses. Sir John Neville was created Baron Neville of Montagu by Henry VI. The latter was murdered while at prayer in the Tower of London and the succeeding monarch Edward IV made him Duke of Northumberland because of his support of the Yorkist cause. He was also given more land in Norfolk and Suffolk, lands which had belonged to those who had fought against the new king.

However Percy of Northumberland sought and secured the King's favour with the result that his title was restored and Neville, in compensation, was made Marquis of Montagu. 1471 This, however, did not satisfy him, and when his brother the Earl of Warwick turned against the king the marquis raised 6,000 men at arms and joined his brother. At the resultant battle of Barnet in 1471 the Earl of Warwick and John Neville Marquis of Montagu and owner of the manor of Somerton were killed. Here the Nevilles pass out of the story of Somerton.The manor seems to have passed to a daughter, Margaret, the wife of Sir John Mortimer. On his death she married Charles Brandon Duke of Suffolk. there was a divorce and she married a Robert Downes. In the 17th Century the lordship of the manor of Somerton had become the property of Sir Francis Blundell. One of St. Margaret's longest serving rectors must have been the Rev. John Maddy D.D., F.R.S., F.A.S. He was canon of Ely Cathedral, and Chaplain-in-ordinary to George. Ill, George IV, Williarn IV and Queen Victoria. He was incumbent of Hartest-cum-Boxted and Stansfield as well as of Somerton.

My sincere thanks for their help and guidance go to:-

The Staff of the, County Record Office Search Room Bury St. Edmunds for producing for me the following documents and publications

(5) 1827 A concise description of Bury St. Edmunds and its environs

(13)1988 Guide to Suffolk Churches by Canon D. P. Mortlock AND to their authors

(14) And to Mr. John Lister of Somerton the current guardian of the Legend of the ring of six beech trees in the churchyard.