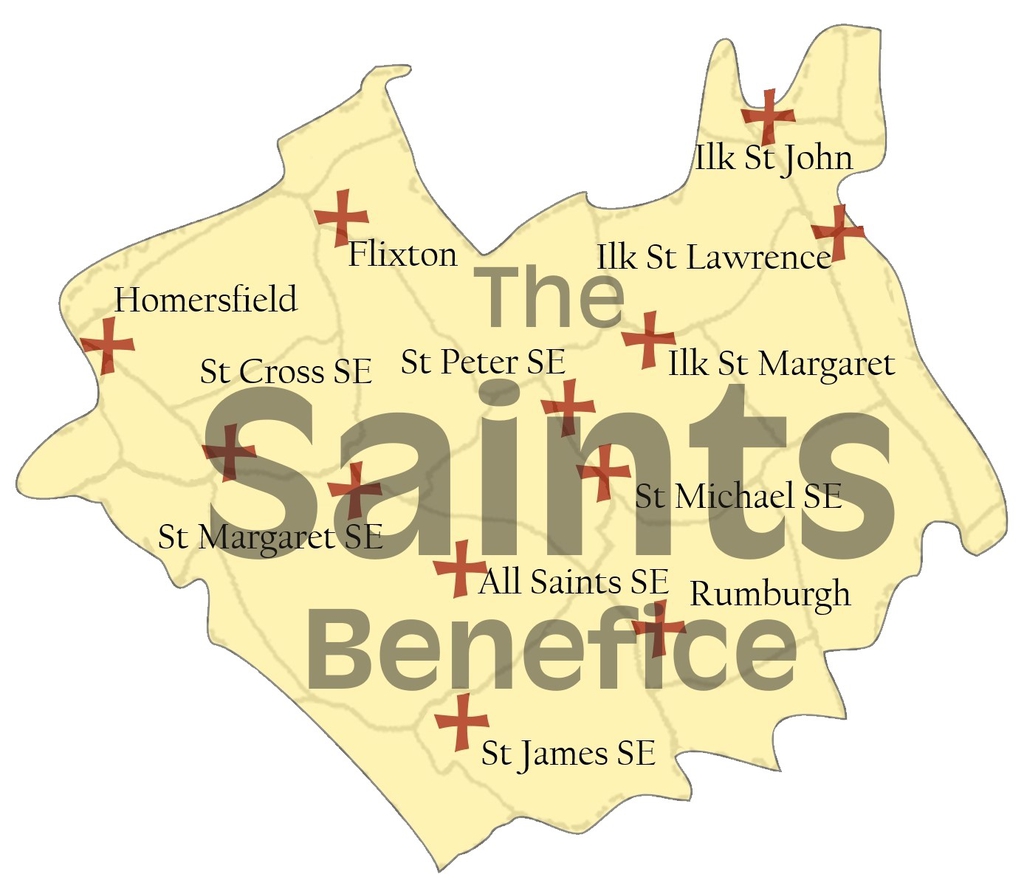 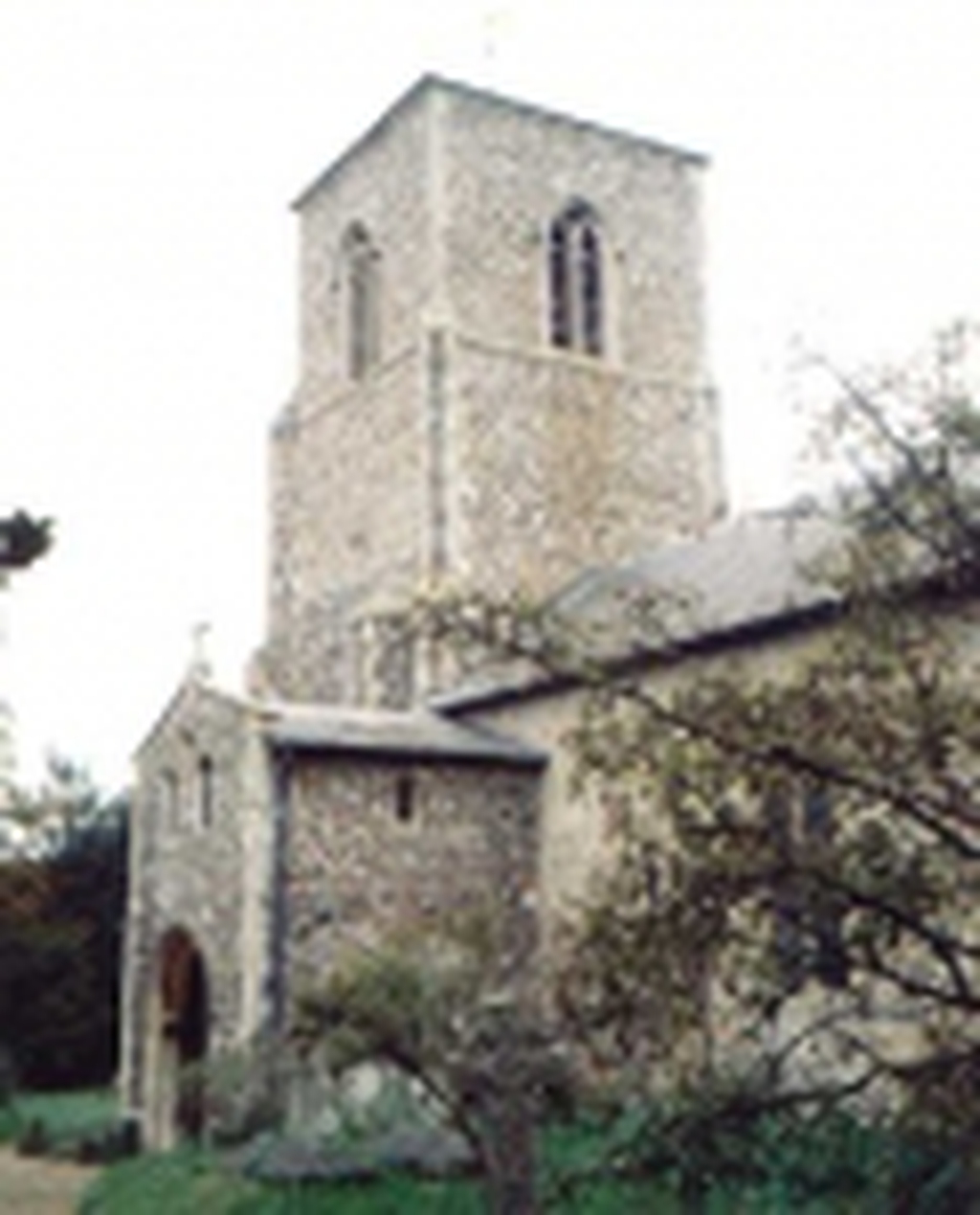 The small village of South Elmham Saint Margaret is situated in quiet countryside in the north of Suffolk, about five miles south of Bungay. It is one of the group of six parishes called South Elmham and these, together with the four Ilketshalls nearby, are known locally as the 'Saints'.

Saint Margaret's church stands pleasantly near the road which bends to go round the churchyard. The core of the nave dates from the time of the Normans. This can be seen from the crude 'erratic' masonry in the south east corner (which may be even earlier), also the small window in the south wall and the south doorway. The tower and chancel were probably built during the C14th and the Perpendicular windows which light the building were added during the C15th.

The church was thoroughly restored in 1838, when the stonework of some of the windows was renewed.

The square west tower dates from the early C14th. It appears somewhat incomplete for this area because it has no parapet, but in spite of this it is a fine piece of craftsmanship. Around the base are pleasant trefoil-headed flushwork panels and at the foot of the western buttresses is some fine stone-carving; a shield on the south-west and a carved motif within a lozenge on the north-west. The two-light Decorated west window has been renewed, as has the square-headed single window above it, but on the north and south sides are small square windows. These are common in Norfolk and are known as sound-holes. That on the south has a quatrefoil pattern and in the northern one is an octfoil pattern. The simple two-light belfry windows are in the Decorated (C14th) style and above, on the north side is a good medieval gargoyle. In the south-east corner is the staircase turret, which still retains its tiny original windows.

On the north side of the nave are two double Perpendicular windows and a blocked doorway with a renewed head to the arch. The vestry dates from the C19th, as does the east window of the chancel, which is in the Decorated style.

On the south side, the chancel has two Perpendicular windows and a renewed priest's doorway. The nave on this side has another two-light Perpendicular window, also a small Norman slit window.  Into the wall nearby has been placed an C18th  headstone (1729) and another, with a Latin inscription (1742) can be seen in the east wall of the porch. Several more headstones from the same period, some of which are very well-preserved, can be seen in the churchyard on this side. One small stone dates from 1706.

The south porch has two storeys. Its upper floor is known as a parvise, or priest's room and it is lit by single windows. The outer entrance arch has been renewed, as has the niche above it. In the stonework of the western quoin of the south wall are the remains of three medieval mass-dials, of which one is quite well preserved. Access to the upper chamber is by means of the belfry staircase.  Inside it are the remains of a simple Jacobean bench. At one time part of a barrel-organ was stored here. The south doorway is Norman, and is at least 800 years old. It has a simple arch with roll-moulding, resting upon volute capitals. Nearby are preserved the old village stocks.

The south door gives access to an interior which is bright clean, and well maintained. Between the nave and the tower is a handsome tower arch, which is lofty and beautifully moulded. A small doorway gives access to the belfry stairs. It contains a strong medieval door and in the stonework above is carved some interesting graffiti, of some age, including the name of John Sellynge.

The nave is crowned by a fine medieval arch-braced roof, built of oak and having a nicely carved cornice. The shields, depicting the emblems of the Passion and other Christian symbols, were added during more recent times. Beside the south doorway is the niche for the former Holy water stoup. This has a trefoil-headed arch.

The C15th font is of a design which is common in East Anglia. It is octagonal and around the bowl are the symbols of the four Evangelists, alternating with angels bearing shields. There are lions round the stem, above which is a band of fleurons. The simple font cover is made in the Jacobean fashion.

The seating in the church dates from the year 1875, but beside the north wall of the nave are preserved seven medieval bench ends, with poppyheads. These can be seen towards the west and they are slightly smaller than their C19th counterparts. The rood loft stairs remain in the north wall. Nearby is an hour-glass stand. The hour-glass has now unfortunately disappeared. It was similar to an enormous egg-timer and helped the preacher to judge the length of his sermon.  A replacement has now been found.

The roof, glass and furnishings of the chancel are Victorian and the chancel-arch was also renewed at this time. The chancel does however contain two medieval features of considerable interest. To the south of the altar are two panels from the base of the former rood screen. Although they are greatly decayed, traces of their original paintings can be discerned. That on the left is thought to be St. Hubert and the other figures were probably also bishops.   In the north wall is a fine Easter Sepulchre, where the Blessed Sacrament was placed from Good Friday until Easter, symbolising Our Lord's burial in the tomb. This is a very pleasing piece of medieval stone-carving. The recess has a crocketted canopy with a finial and flanking pinnacles, and there is carved tracery with fleurons on the base. On the walls of the chancel are two good C18th wall monuments.

Although the vestry itself is a Victorian addition, it does contain several interesting features.  There is an ancient chest, with three locks, also a 17th century Holy Table, which probably once served as the high altar of the church. On the wall hang portraits of several former Rectors. One Rector here was the father of Martin James Routh, who was born in 1755 and lived for 99 years. He was the President of Magdalen College, Oxford and a small picture of. him can be seen in the stoup niche by the south door. A large fragment of medieval stained glass from the 14th century depicting intricate canopy work with pinnacles was previously in the eastern window of the vestry but was in poor condition. It has now been restored and is displayed to the south of the altar in memory of a previous rector, Peter Skoulding.

Amongst the plate possessed by the church is an Elizabethan Chalice, dating from 1567 and inscribed 'Saynte Margetes of Ellmum'.  This Chalice had an eventful life, having been sold, but recovered by the Rev. E. Holmes and given back to the church by his children' in 1891. There is also an Irish paten, made in 1705, which was bought second-hand for the church in 1838.

In the tower are five bells, all of which were cast by the Brend family in their Norwich foundry. The earliest dates from 1596 and was cast by William Brend. Another is dated 1637 and the remaining three were cast in 1657.

The registers of the church date back to 1679.