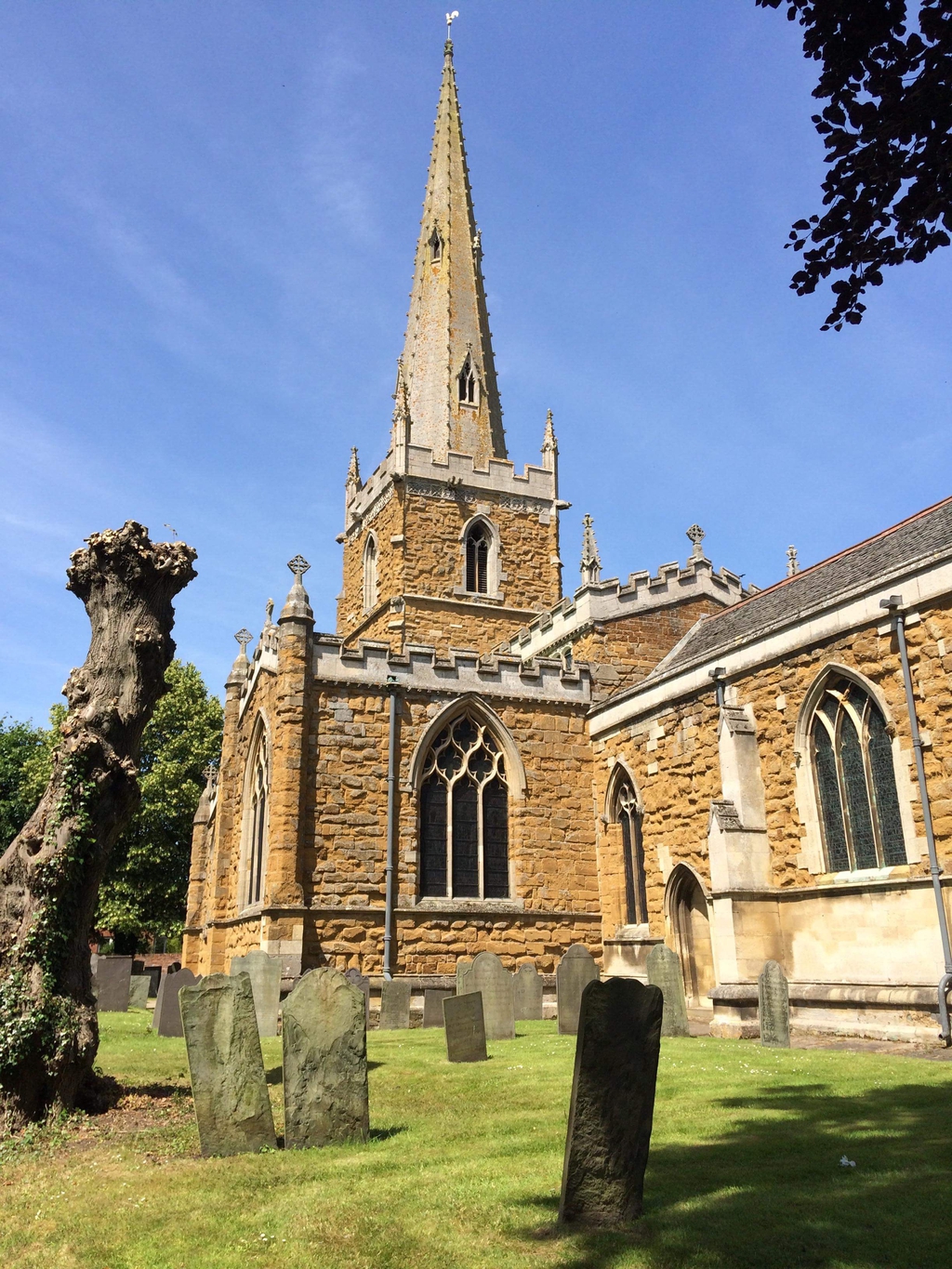 Asfordby: All Saints
Services and events
News and notices
A History of the Church
Find us
Church Lane Asfordby Leicestershire
Get in touch
07952 422 026
Facilities
More information
Social
Edit this church

The church is situated near the village Cross in a cul-de-sac on the south side of the main street passing through Asfordby Village.

The church has a Nave with North and South aisles, a Chancel, North Transept and a South transept, unusually with a western aisle. There is a Porch on south side of South Aisle. North of the Chancel and west of the North Transept is an Organ Chamber with a Vestry to its east. A Boiler Room is situated beneath organ chamber and there is a Utility area and Toilet in the west end of North Aisle.

A Tower with Clock Room and Bell Chamber stands at west end of nave. The Tower has perpendicular tracery and has battlements and pinnacles with gargoyles. Surmounting it is a graceful limestone spire, one of the tallest in the Wreake valley. The Tower contains a clock that was installed in 1887 with a face on the north side. The peal of six bells was rehung in 1878 and again in 1953, that time on a steel frame. Five of the bells go back to 1630, whilst the 5cwt treble was installed in 1887.

The original Church, mentioned in the Doomsday Book, in 1086, was possibly a wooden structure. The present church consists of ironstone ashlar walling crenellated with limestone dressing. The Chancel, Vestry and Organ Chamber are roofed on Swithland Slate and the South Transept is roofed in copper. Other roofs have lead covering.

The 14th century south doorway is ornamented with ballflower. Many ballflower type ornaments, on external faces of the Church, are found to be heads that vary from realistic to symbolic.

The Church has been carefully restored, externally and internally, since 1830, but mainly between 1866 -1870, to its present condition.

The cemetery, on three sides of the Church, is spacious and well maintained. It includes a "Garden of Remembrance" for cremated remains.

The Interior of the Church

There are many engraved headstones on the floor of the Church, some dating back to 1719 (Wate). The slightly pointed arches (Equilateral or Drop) at the south side of the Nave are different from the pointed arches (Lancet) on the north side, giving a possible variation of many years. The 15th century oak roof of the Nave has an earthly symbol of a Green Man and has twelve wooden Angels, mounted on Corbels, supporting the roof.

At the head of the Chancel, in the Lady Chapel and over the west door, are some exceptional stained glass windows with reticulated tracery. . Internal stonework decoration consists of Cusped Heads, Quatrefoils, Cinquefoils, Ogees, Polygonal Responds, Pilasters and Bratticed Capitals.

On the south wall of the Sanctuary there is a Sedilia and Piscina. The north wall has an Aumbrey next to the Vestry door, and also a permanent light indicative of His presence. The lower part of the rood screen is 15th century and the present Rood was placed as a memorial to those killed in the First World War. Nearby is a wooden Wall Plaque dedicated to the soldiers of that war. Behind the High Altar and the Lady Chapel Altar are Dossals or ornamental hangings. There is a Piscina in both Transepts and that in the north Transept is surmounted by an Aumbrey without doors. The south Transept has an aisle and on the west wall there are three slate wall tablets with two Roundels. The Sanctuary floor is laid with Encaustic tiles.

Furniture in the Church includes brass Crosses and Candlesticks, two tall upright brass Candlesticks, two wooden Processional Candles and a large brass Processional Cross on a shaft. The latter items precede the Rector into the Service. There is a Prayer Desk, a three-sided Pascal Candle Holder indicative of the Holy Trinity, manufactured in stainless steel and dedicated in July 1997. A Cross and Candle Holders, coloured red and gold, made of cast iron, were a gift from the local Holwell Ironworks in 1964.
In the Church there are two 15th century bench ends and three segments of a Saxon Cross (with scrollwork and a dragon on one stone and a figure giving a blessing on another.) These are dated lOth/11th century and were removed in 1961 from the outer wall of the north Transept. The Church also contains a painted wooden clock face dated 1824.

The oak Pulpit, on a stone base stands on the North side of the Nave. There is also a full size brass Eagle Lectern dedicated to John Cartmell, Rector 1899. At the rear of the Nave are two chairs with brass plaques designating these seats for the use of the Churchwardens, together with their staves.

The organ, on the north side of the Pulpit, is dated 1877 and was manufactured by Eustace Ingram, London. It is in excellent condition.

The Church Registers date from 1564,