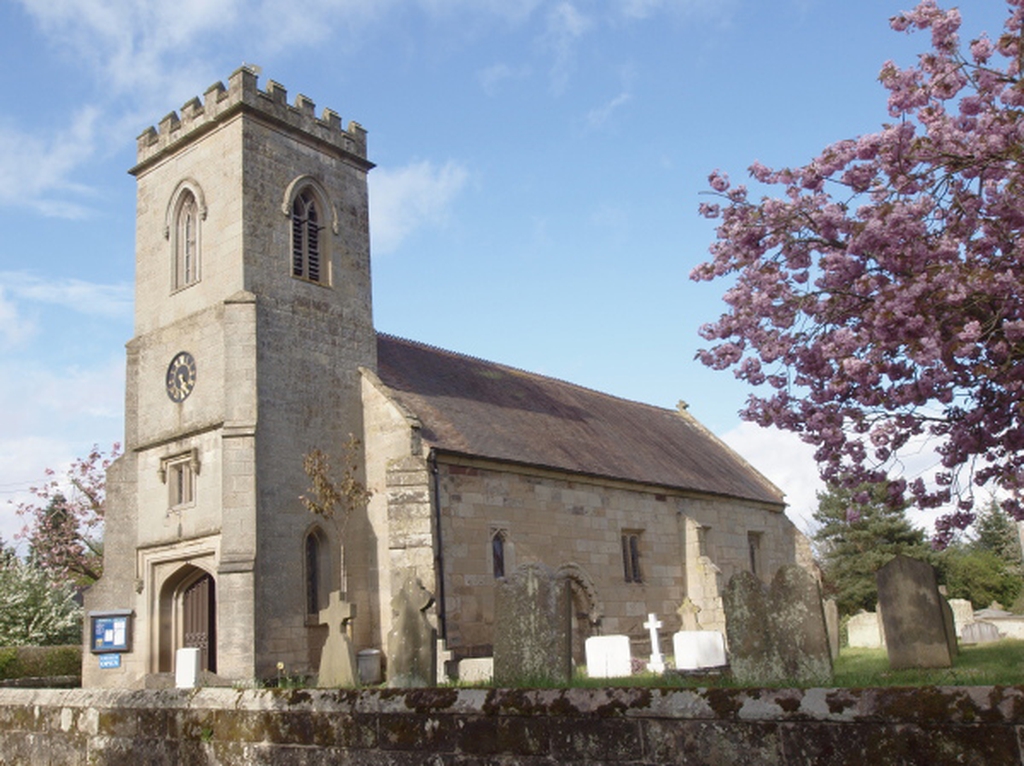 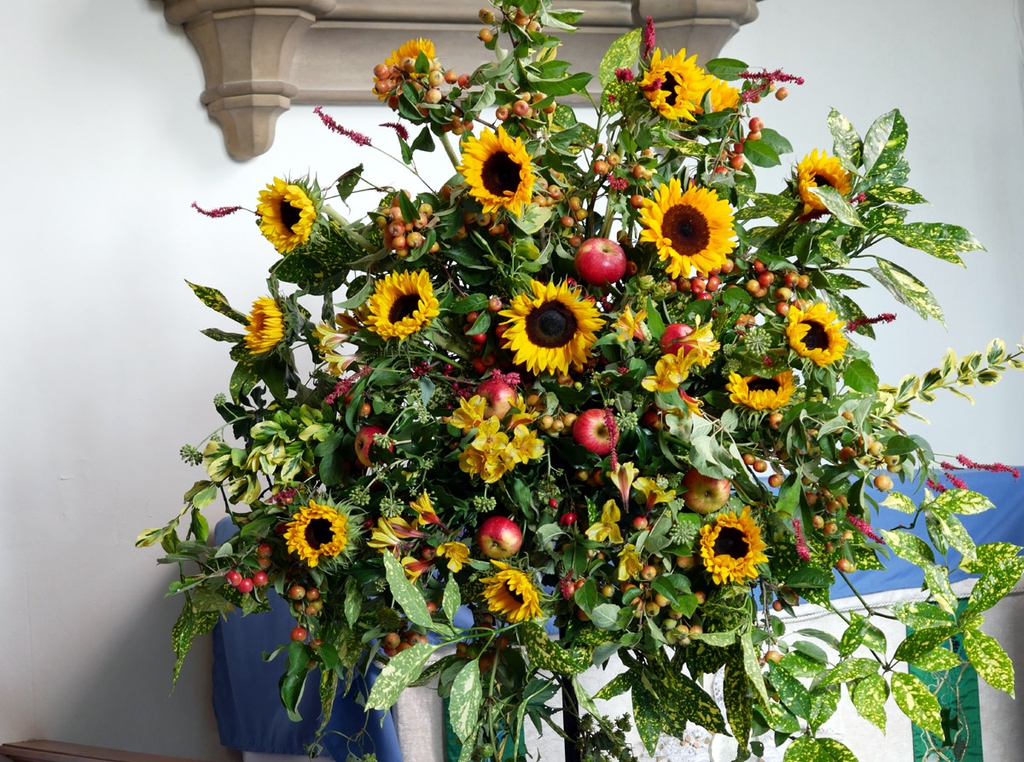 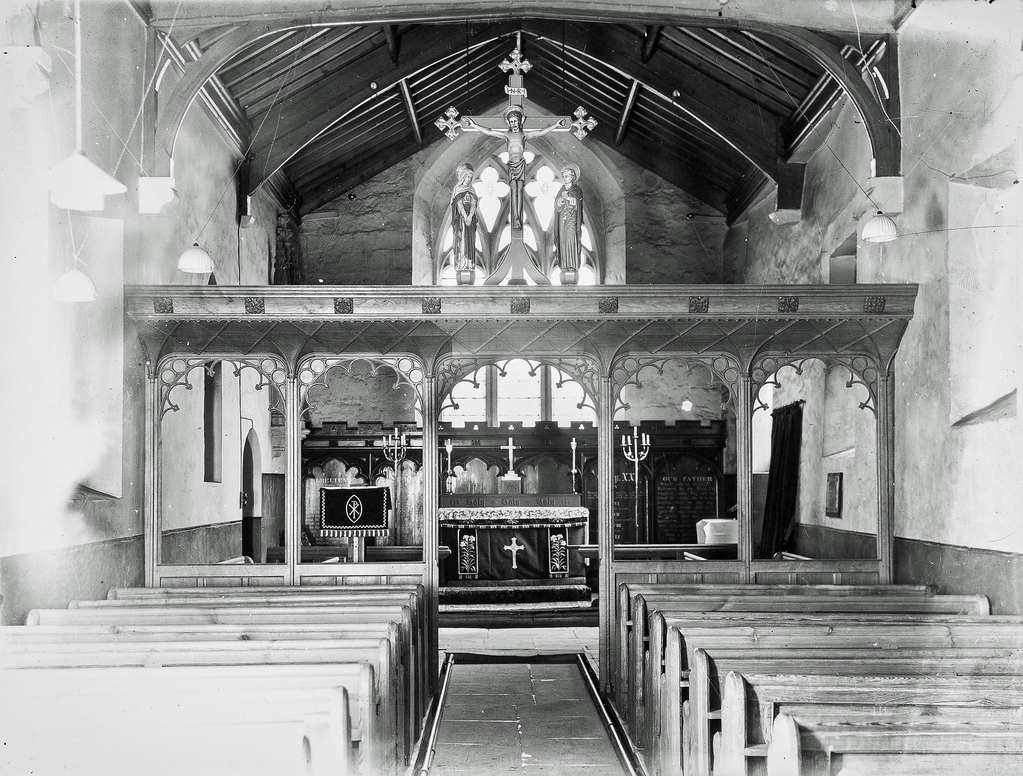 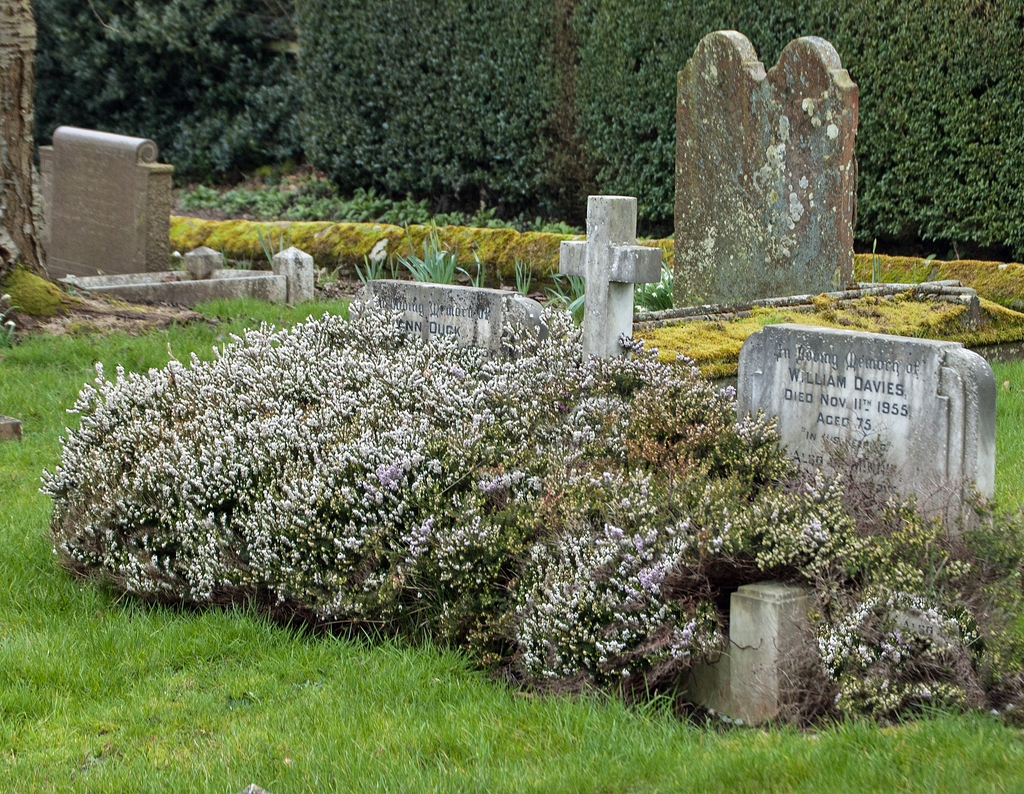 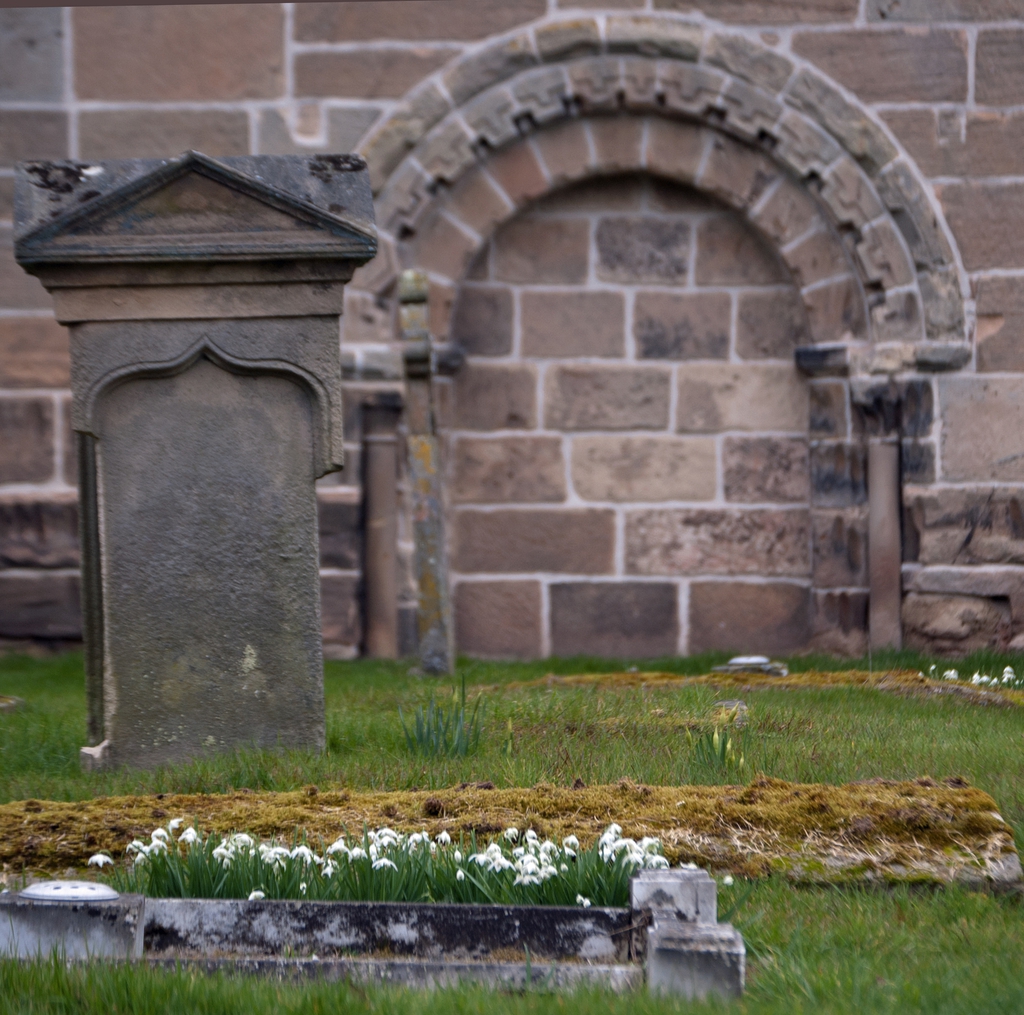 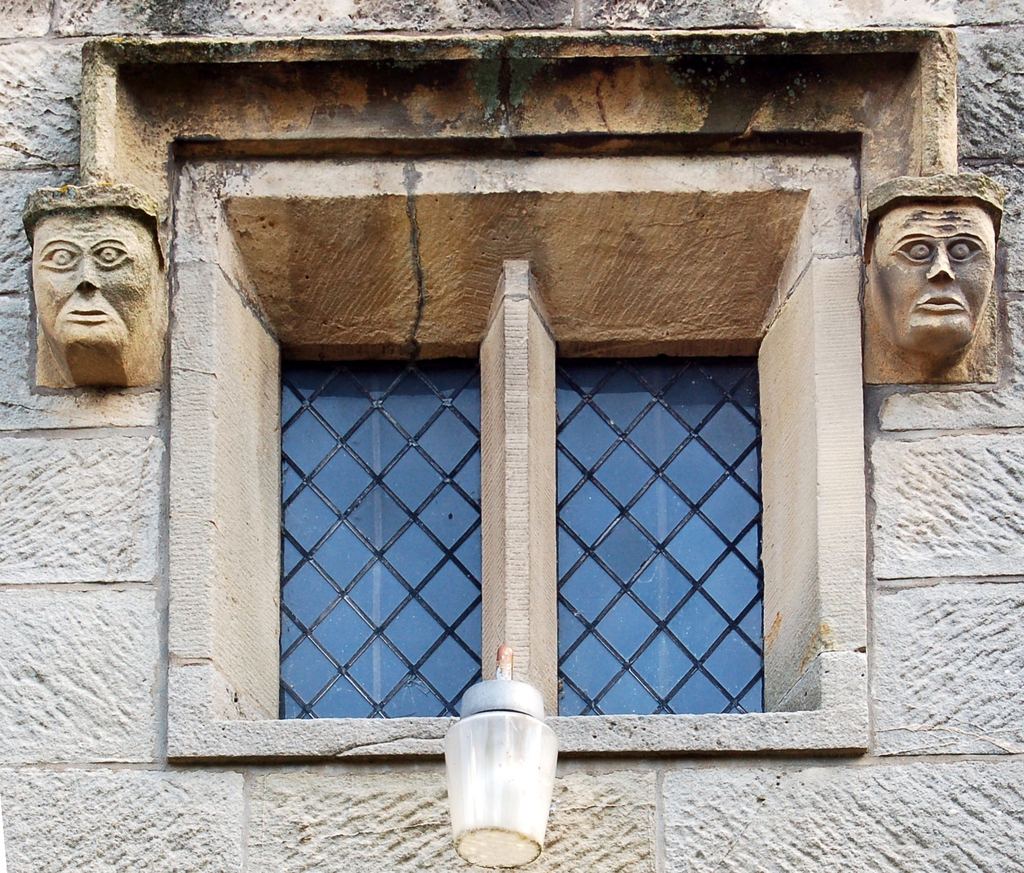 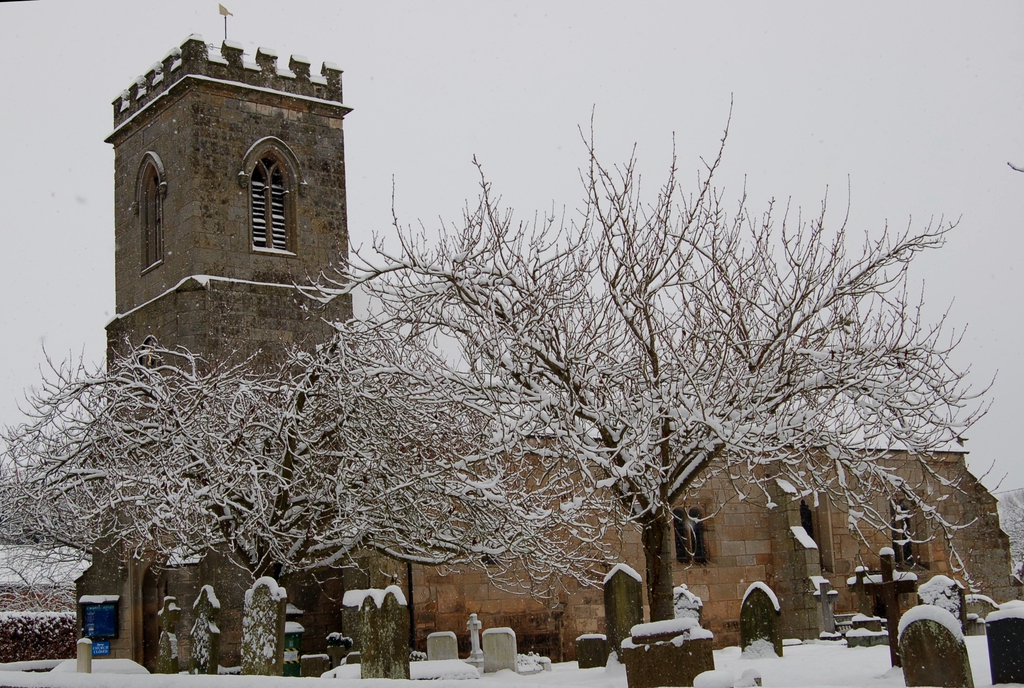 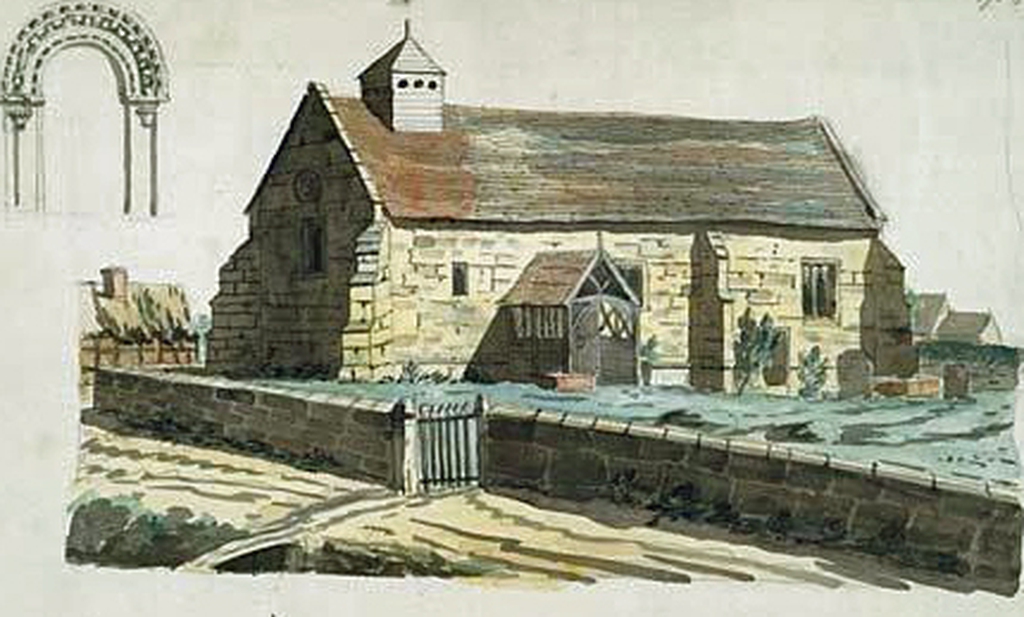 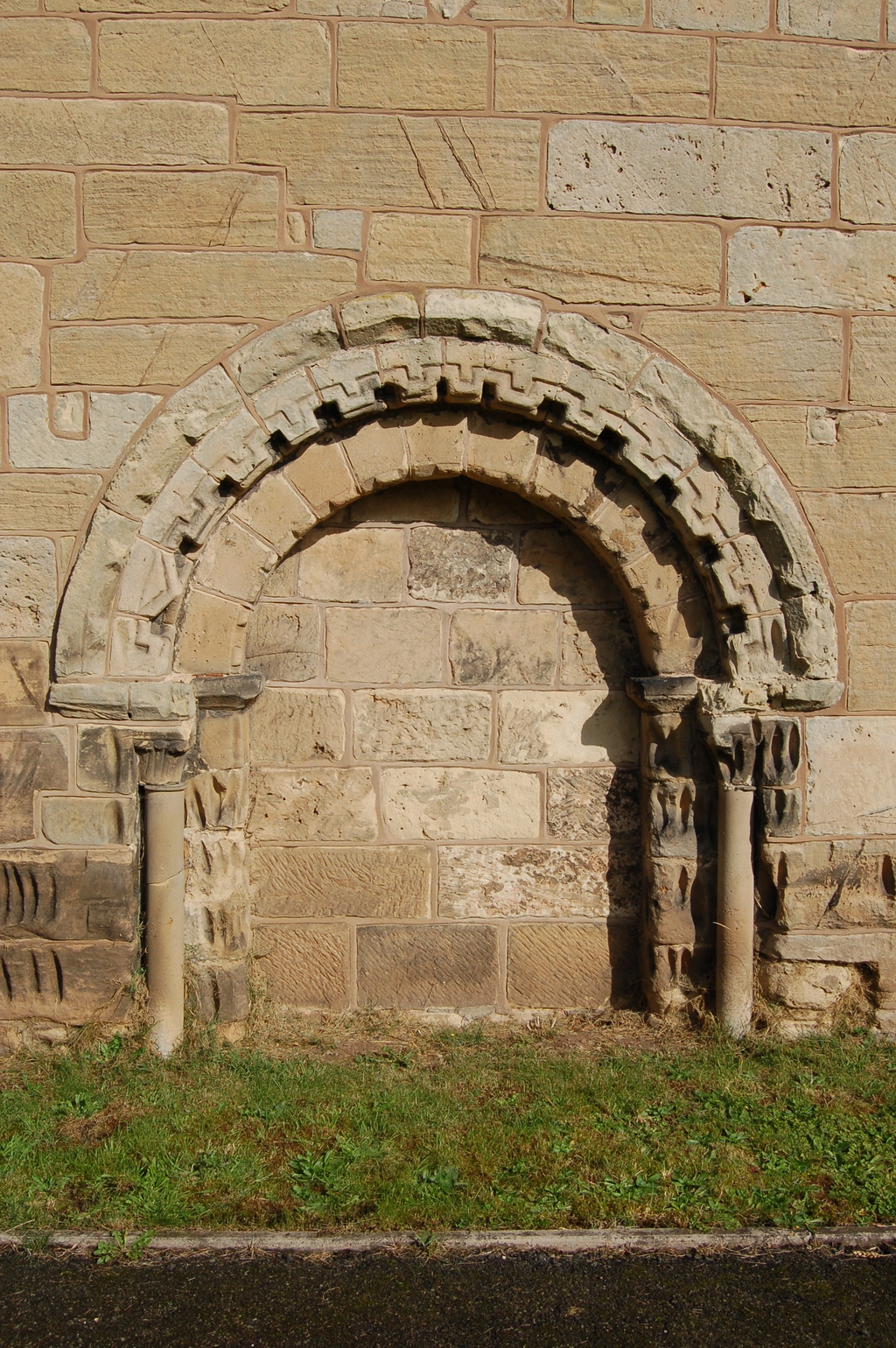 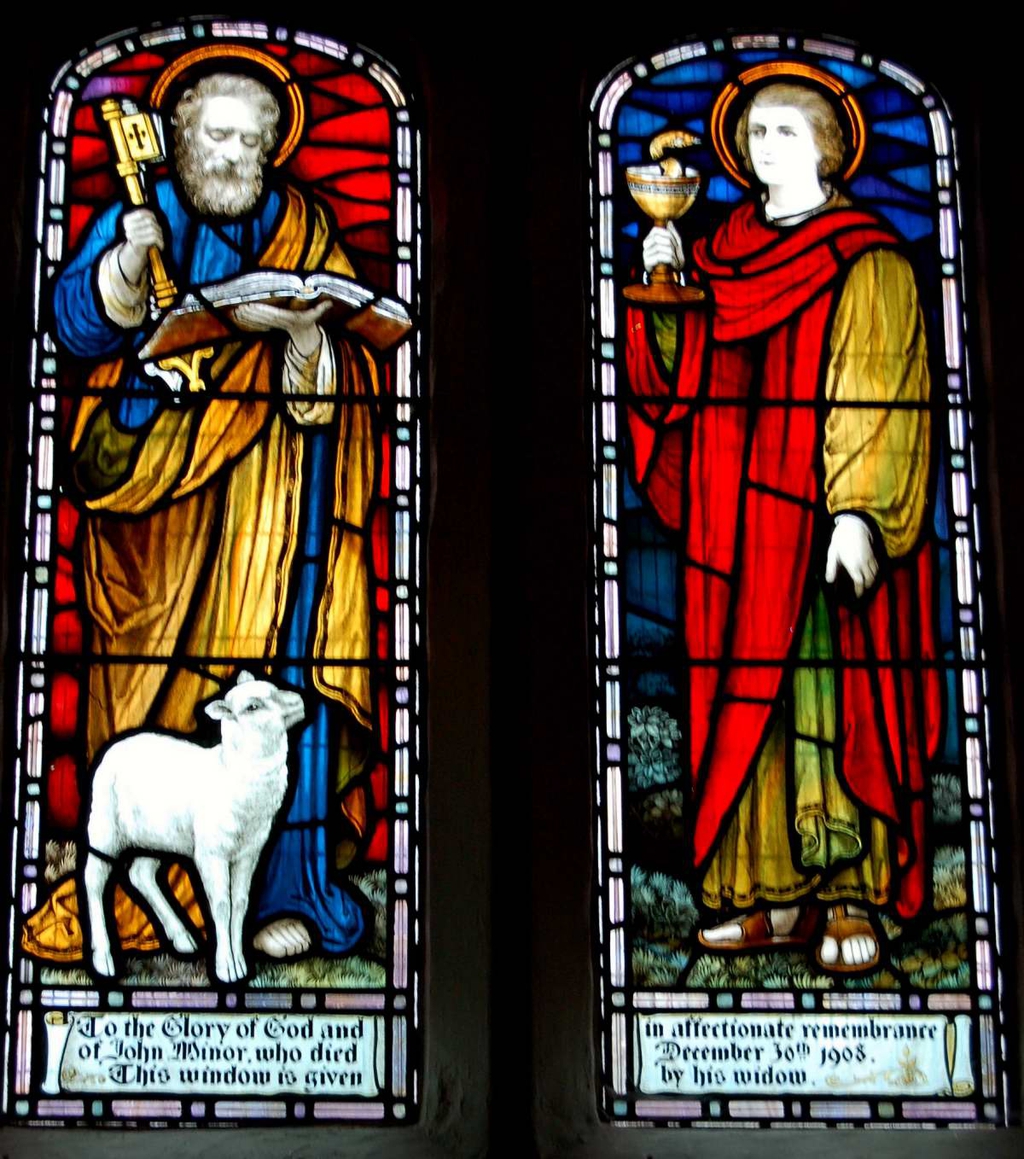 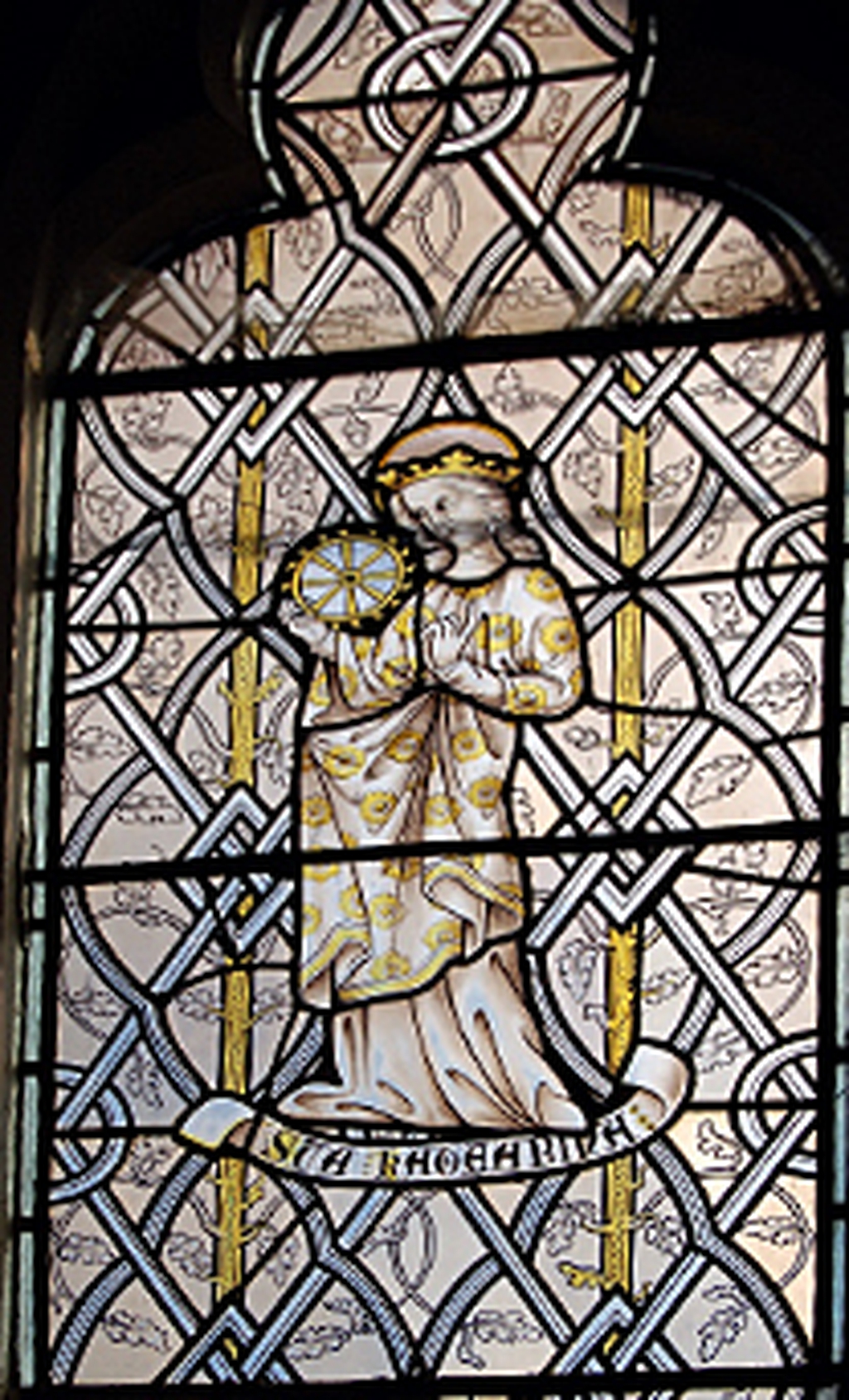 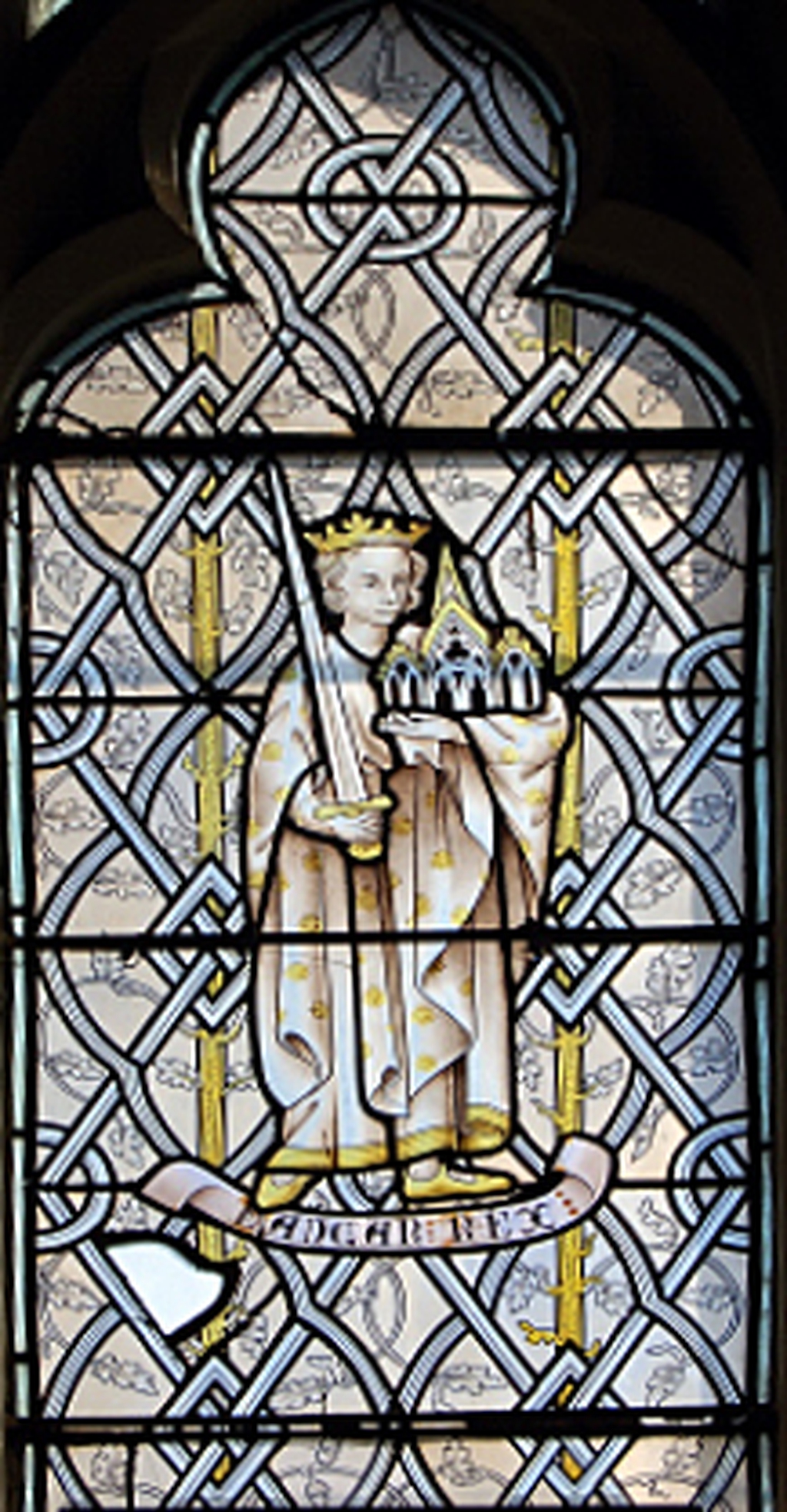 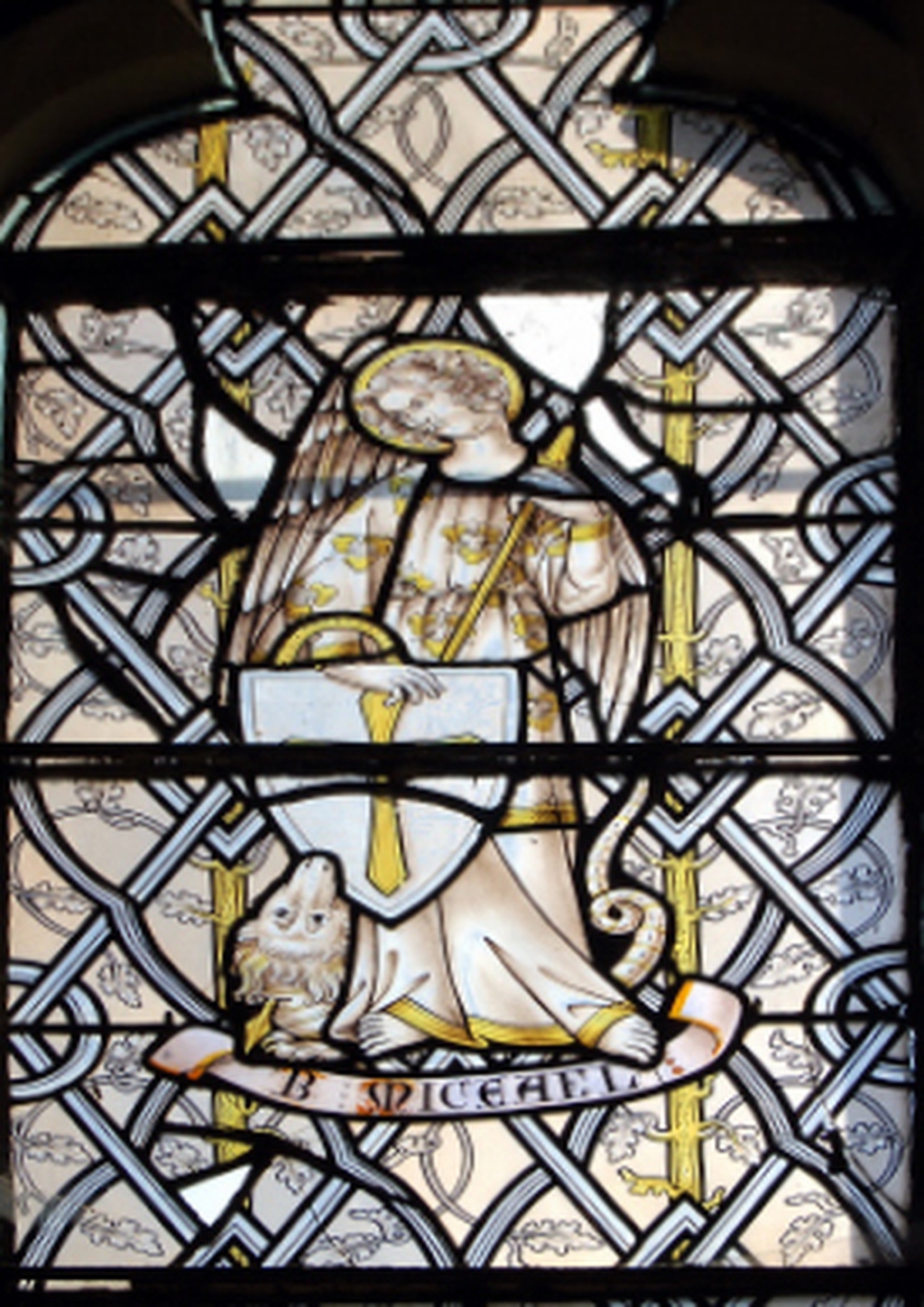 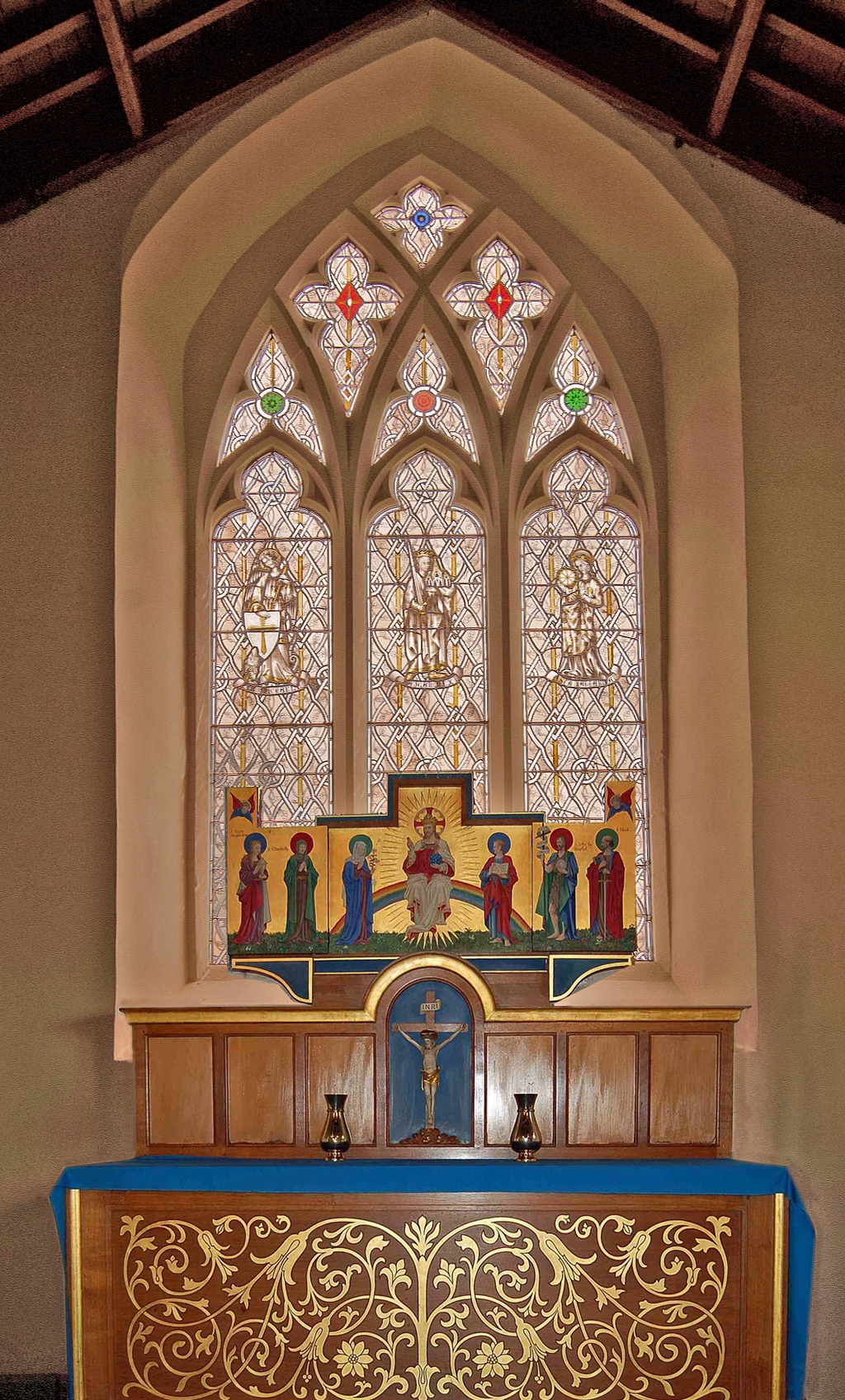 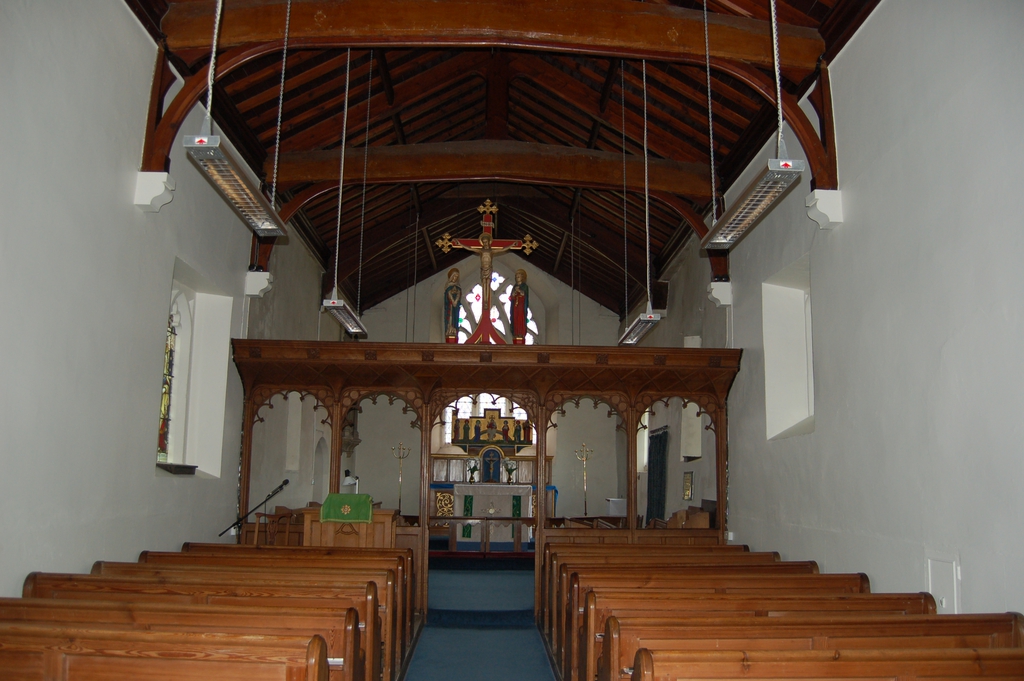 The East Window (Moderate-High Significance) was gifted to the church in 1849 by John Bishton Minor Esq, one of the Chapel Wardens and 1851 mayor of Shrewsbury. It was made by David Evans of Betton & Evans in Shrewsbury, a well known stained glass artist who, in 1859, restored the famous medieval "Jesse" window of St Mary's in the town. According to The Gentlemans Magazine of 1849, the Trustees of Shrewsbury School restored the stonework of the window "as impropriation the tithes of the chapelry." It is thought that the vertical silver-stained golden yellow "vines" running up through the lights and into the traceries suggest a "Jesse Tree" motif. The Stained Glass Museum of Ely Cathedral commented that "the late date of 1849 (when Betton died) accounts for the more gothic (revival) style, and looks to have been influenced by some of Pugin's early designs. The lack of bright enamel colour may have been deliberate to let more light in, or again, may reflect changing tastes (it is in the 1830s that this firm produced their most lurid windows). The faces are fairly linear in an Evan's style."The Glaziers Trust committee recognises the window as "an intriguing example by a highly regarded eariy-19thC artist, and from a time when a revival of interest in medieval glass began to affect contemporary design, but before  mass production sullied the market for new stained glass." The three figures are described as follows:

St Michael the Archangel, "winged and holding a spear, and on the right arm a shield displaying a cross, and at the feet a dragon onto which the spear is piercing." Michael, which means "who is like God" is one of the three named biblical angels, depicted as messengers of God. He is described as protector of Israel and leader of the armies of God and is perhaps known for his victory over the dragon, which is told in the Revelation to John. He is thus regarded as the protector of Christians from the devil, particularlythose at teh hour of death.

King Edgar, "bearing a sword in his right hand and in his left the figure of a church."  Edgar of Wessex was born circa 942, the second son of Edmund the Elder. He was sixteen when he ascended the throne after the death of his elder brother Edwy. His coronation, which took place at Bath in 973, was the first to be described in detail in the annals of English history and on this ceremony, all future coronations of English Kings, up to the present day, have been based. King Edgar maintained the peace established by earlier kings of the House of Wessex. Under Edgar, the union of England under one dynasty was firmly established. Highly conscious of the importance of sea-power, he had built up a navy of 3,600 ships by the time of his death, which were used to guard England's shores from the incursions of the Danes. King Edgar kept peace in the Danelaw largely by a policy of non-interference and displayed his neutrality by ravaging the Saxons of Thanet for alleged ill-treatment of York merchants. The years of peace enjoyed by Edgar made it possible for him to make changes in England's administrative structure and it was Edgar who divided England into shires, each of which were divided into hundreds. His laws were much respected by future generations, he greatly encouraged trade and protected the currency. He was severe on those that withheld church dues and a great believer of monastic reform.

St Katharine, "with the insignia of a wheel." One of the most popular early Christian martyrs and one of the Fourteen Holy Helpers (a group of saints venerated for their power of intercession). She is the patron of philosophers and scholars and is believed to help protect against sudden death. St. Catherine of Alexandria is not mentioned before the 9th century, and her historicity is doubtful. According to legend, she was an extremely learned young girl of noble birth, possibly a princess. She protested the persecution of Christians under the Roman emperor Maxentius—whose wife and several soldiers she converted while imprisoned—and defeated the most eminent scholars summoned by Maxentius to oppose her. During her subsequent torture, she professed that she had consecrated her virginity to Jesus Christ, her spouse, and was sentenced to death. The spiked wheel by which she was to be killed broke when she touched it (whence the term Catherine wheel), and she was then beheaded. After her death, angels allegedly took her body to Mount Sinai, where, according to legend, it was discovered about 800 CE.

King Edgar is believed to have founded St Mary's in Shrewsbury where there is a Chapel dedicated to these three.