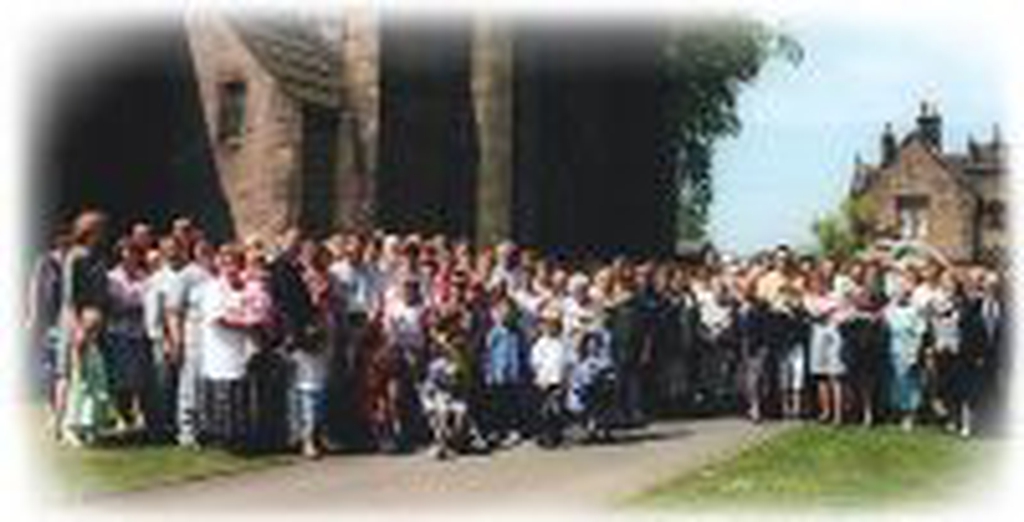 Knypersley S.John the Evangelist
Services and events
News and notices
About us
A history of the church building
Find us
Tunstall Road, Knypersley Knypersley Stoke-on-Trent
Get in touch
01782 512240
Facilities
More information
Social
Edit this Church

A history of the church building

Knypersley church was built for John Bateman and his son James; the designs being drawn up in the 1830s with the assistance of a Mr Edward Cook, and supervised by the architect, R.C. Hussey Esq. In 1848, the date inscribed on the stone above the entrance porch, the building work for the church, along with the adjacent Parsonage and school, at last got under way. It was completed in time for the first service to be held on Thursday 28th August,1851, led by the Venerable Archdeacon Rushton, Archdeacon of Stoke upon Trent.

For most of the first 50 years of its life, the building served as a private family chapel for the Bateman family and their estate workers. However in 1895, it was officially classed as a daughter chapel to Biddulph parish church; and in 1922, upon the creation of a new civil parish of Knypersley, the building's ownership was conveyed by Robert Heath to the church commissioners and it became a parish church. It was consecrated and dedicated to St John the Evangelist on Saturday May 13th 1922.

We have every reason to be grateful for our church building. Many similar estate churches have ended up as something of a folly - often ending up far too distant from where people live to have any continuing practical use in the 20th and 21st century. But by God's providence, Knypersley church has ended up in just about the perfect position to serve its people today - easily visible on the main road; and just about within walking distance for most parishioners - whether in Brown Lees, the former miner's estate, or the Conway Road/Colwyn Drive area.

We hope that visitors will not only enjoy looking round our church building, but will be able join us for worship too; for that ultimately is what it was built for.

Exterior Construction
No real structural changes have taken place in the Church, from its original form when built; it is of the Early English decorated style. The stone for all the building is a hard durable local Millstone grit (grey) most of which came from a quarry sited at Rock End around about a mile away in the east part of the parish. There was also a small amount of stone taken from a coal-mine shaft then being sunk in the south-end of the present parish, known as Childerplay No.2. Our present architect comments that the design is fairly typical for an estate church of the period, although the stone archaded columns supporting the nave and chancel roofs are much more common in continental church designs and are quite unusual in this country.

The last two architect's inspections in 1994 and 1999 reported that the main structure was sound and the stonework in good condition considering its age. However a number of parts of the stonework required significant remedial work. The most urgent of these projects was in and around the tower, which was dealt with in the spring of 1999; and the organ loft area, which was restored in December 2000.

The tiled roofs were also reported as being uneven and including some poor areas; and at the time of writing this is the next project to be tackled. In all there is some £40,000 of renovation work needing to be done over the next 5-10 years to ensure that the building remains is passed on to future generations in a good condition.

Spire, Tower and Bells
The church has a broach spire with tower and four gable windows in the spire, at a height of 85 feet from ground level, and including a lightning conductor. The levels for the church spire and tower were taken from Rock End, Mow-Cop and the entrance archway of the stables at Knypersley Hall, in order to make the spire perpendicular.

The single Bell in the Tower (which has no clock face) has had three different hanging sites. Originally it was sited at the gable windows; however in 1853 this hanging frame collapsed due to the Bell's weight, and it was re-sited some 12 feet lower by the tower Louvre Transom windows. In 1896 this wooden hanging frame collapsed again - this time due to dry rot, and a new site was made some 5 feet above the ringing room. The present bell weighs 4½ cwts and was cast of phosphor bronze in 1952 by Mears of London. In general the bell itself is now only rung at funerals; before most services a tape recording of the bells of Lichfield cathedral is broadcast through loudspeakers situated in the church tower.

General Interior
The main roof of the church consists of exposed pitch pine rafters and purlins, which are still in their original condition. The Chancel roof contains a single hammer beam. At its plinth are two incised, crowned heads. At the base ends of the beam are also displayed two stone incised heads, said to be likenesses of the two Batemans (John & James).

The church contains seating for up to 200 people including incumbent and choir. All the pews are of English oak and the nave and chancel are wainscoted in similar material. No pew rents were ever taken at the Church, nor were any tithes taken, the tithe redemption was undertaken in 1937, being before this period exempt.

The archaded columns supporting the nave and chancel roofs were at one period painted and gilded with texts from the Bible. However these were removed before the institution of the first vicar in 1922.

The interior of the Church was first illuminated by gaslights throughout from 1870. In 1932, electric lighting was installed, and the old gas fittings were sold off at 2 shillings (10p) each to parishioners.

Most of the windows of the Church contain their original plain diamond leaded panes, which in 1981 were protected by double glazing panels on the exterior

The stone pulpit dominates the east end of the Chancel/Nave, the base of which was cut from a single block of Millstone-grit and incised by masons from Biddulph Moor. It is wainscoted on the inside with oak-panelling from the old pews of Biddulph Church.

The oak carved and inscribed Bible lectern was the gift of the Gaskell family in 1954, to replace the old one at the top of the Chancel steps, the new lectern is duly inscribed: "Deo Gratis. In Loving memory of George Henry and Elizabeth Gaskell who for many years served this church faithfully and well. 1889 - 1935"

The Churchwarden's staffs (or wands) at the West end of the Church are of oak staves, surmounted by brass spheres with Maltese Crosses. They were donated by Mr & Mrs Tom Parton in 1933.

West End
The Stone font at the West end of the Nave also consists of a single block of Millstone, which until 1951, contained a small "Minton" bone china bowl dated 1851. Mr. & Mrs. C. W. Moreton donated the present oak incised cover with copper bowl in 1954. In the west window is a stained glass panel, depicting our Lord with small children in its main section, in its lower half are depicted a miner's oil light, pick and shovel. This was donated in 1971 by Mrs. M. Wood and Mrs. M. Coggins in memory of the Rev. C. A. Wood, M.A., first Vicar of the Parish in 1922. In true stained glass window tradition, there is also a small picture of a monk - for those who can find it.

Vestry, Organ Loft and Boiler Room
The part of the church which now comprises the organ loft, vestry and boiler house originally contained the Bateman Warburton family pews. When first built, the music in church was provided by a small band of musicians, typically including a fiddle, cello, clarinet and piano. In 1895, however, Robert Heath generously paid for the installation of a fine three Manual Keyboard organ made by Steele and Keay of Burslem,. Originally it was operated by Manual pumping lever, until an electric blower was installed in 1949. The area underneath the organ loft was turned into a vestry, which has recently been refurbished to enable it to be used as a crí¨che room too.

The Organ loft also contains a wheel window, which in 1958, was extensively renovated, due to subsidence damage from old coal mine workings. The Church Heating system, housed under the Vestry at the South side of the Nave/Chancel, was originally installed in 1880, being coal-fired and working by gravity system (i.e. hot water rising). In 1890 a new coke-fired boiler system, new pipes and radiators were installed, courtesy of R. Heath. This remained in use until the early 1960s when an oil-fired boiler was installed, which has in turn been replaced by a gas boiler.

The Sanctuary
The original communion table was a single slab of Carrara marble (blue flecked), some 6 feet by 3 feet; however it cracked in two in 1870, due to subsidence. A new wooden table was installed in the same year, donated by Robert Heath esq. which lasted until 1932 when it was found to be attacked badly by woodworm and dry-rot. The present table is therefore the third, and was commissioned in 1946 and made by Mr J. Crooke's (son of the old 'Picture Place' owner) in English oak. On the front of this table, are affixed two chair backs of Jacobean age, which originally were sanctuary chairs, and originate from Knypersley Hall. They were carved by one Issac Thorneycroft of Gawsworth, who made many articles of furniture for Sir John-Bowyer first Baronet of Knypersley in 1660. The East Window is a typical decorated tracery window with diamond leaded glass, underneath which are incised stone panels with various texts from the Bible on them including the Ten Commandments. There is also a large English oak Bishop's chair donated in 1971, to replace the two old chairs. It is carved and incised, "In loving memory of Thomas Bennison Organist of this Church 1940-1969."