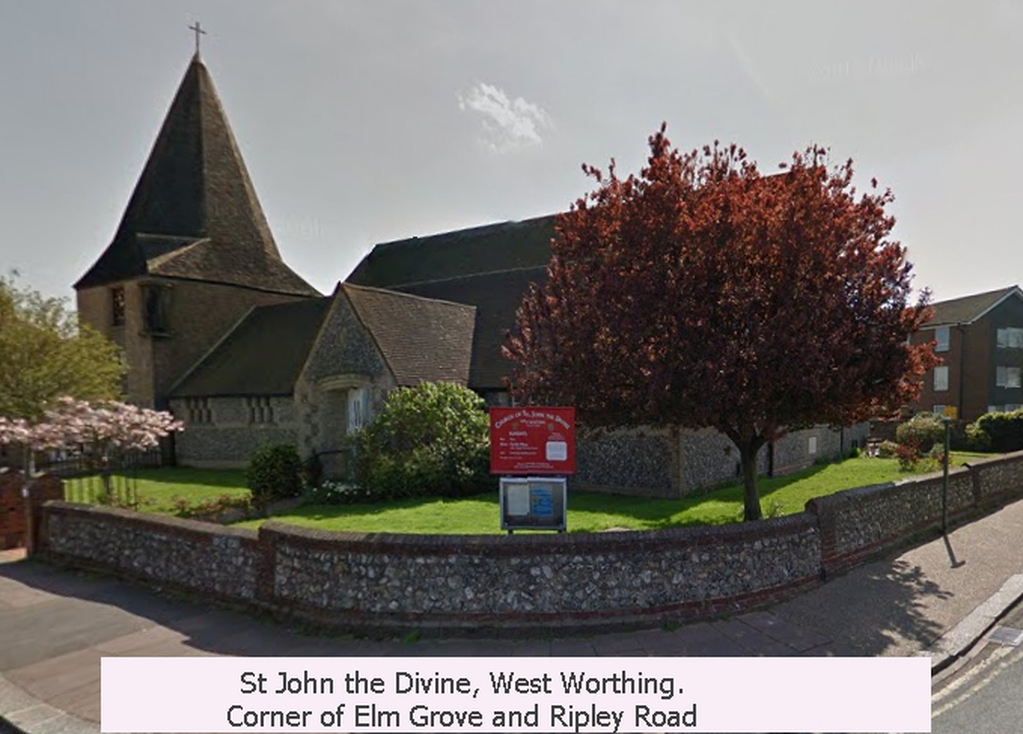 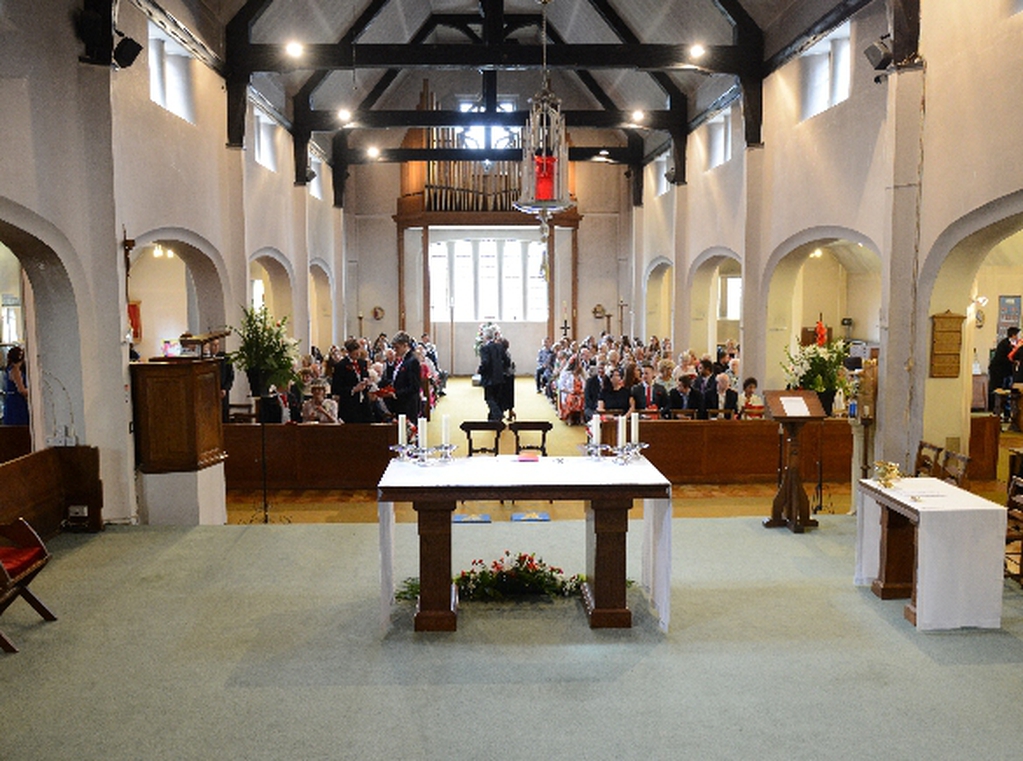 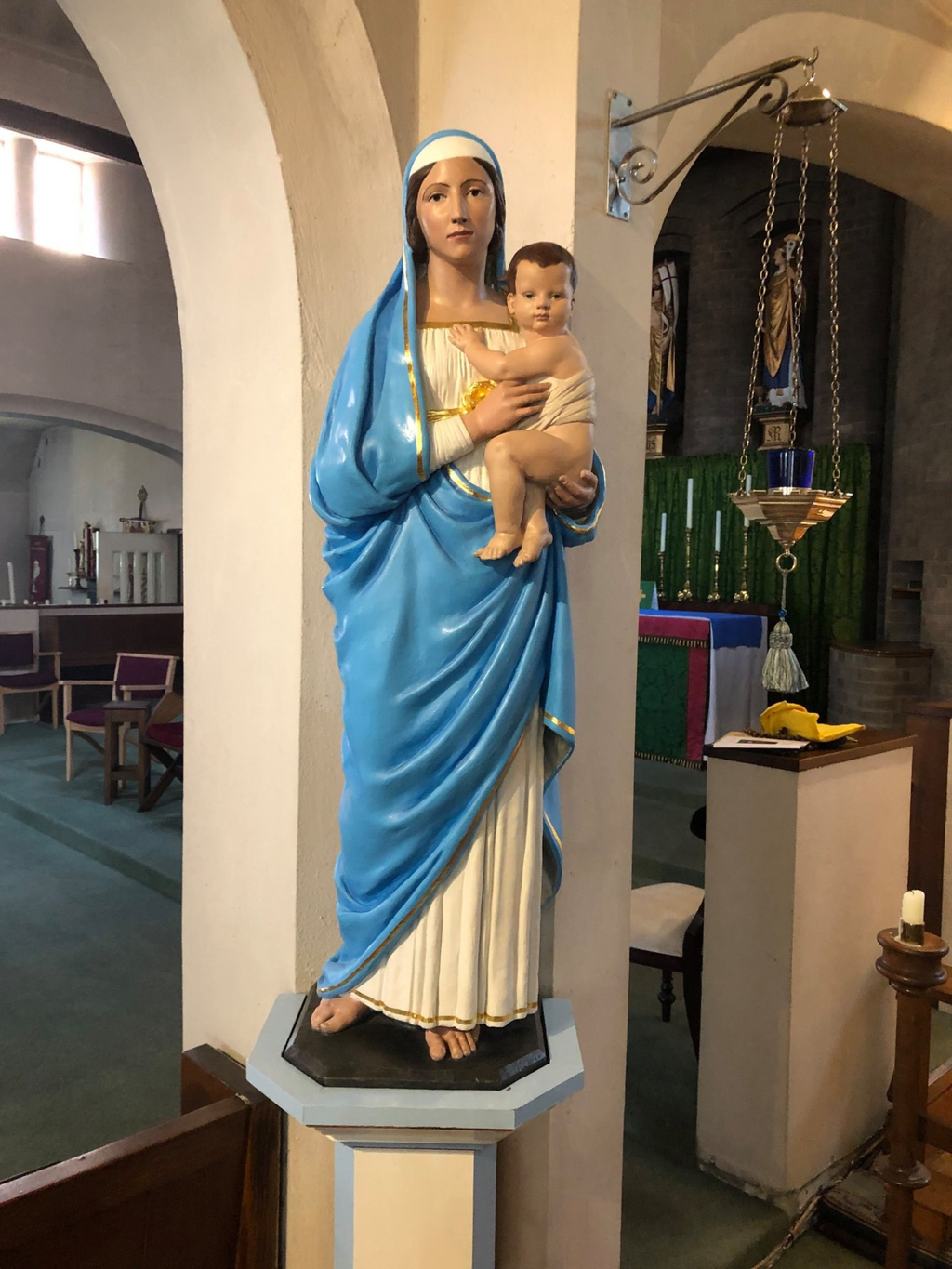 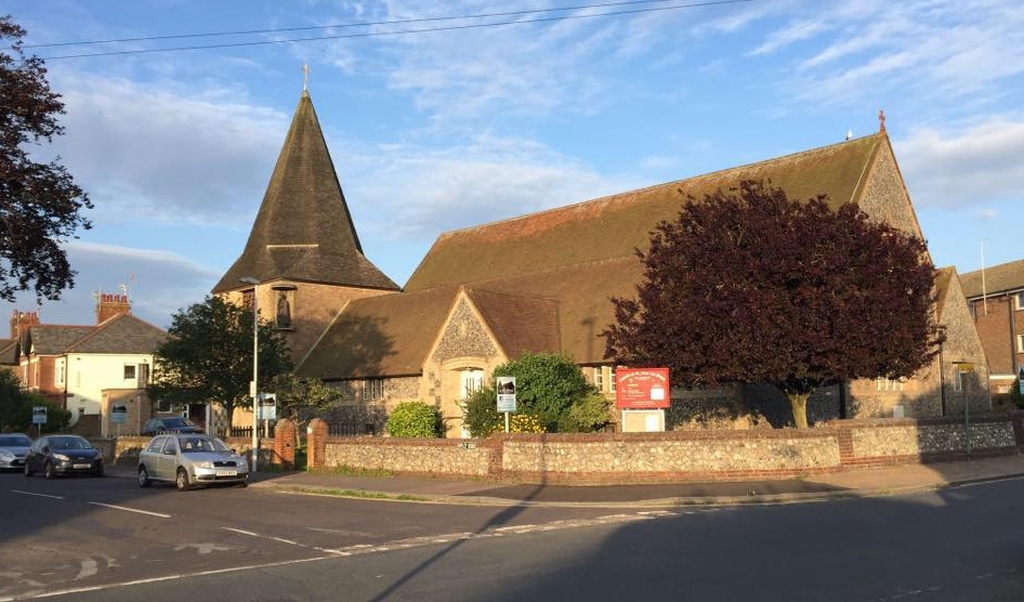 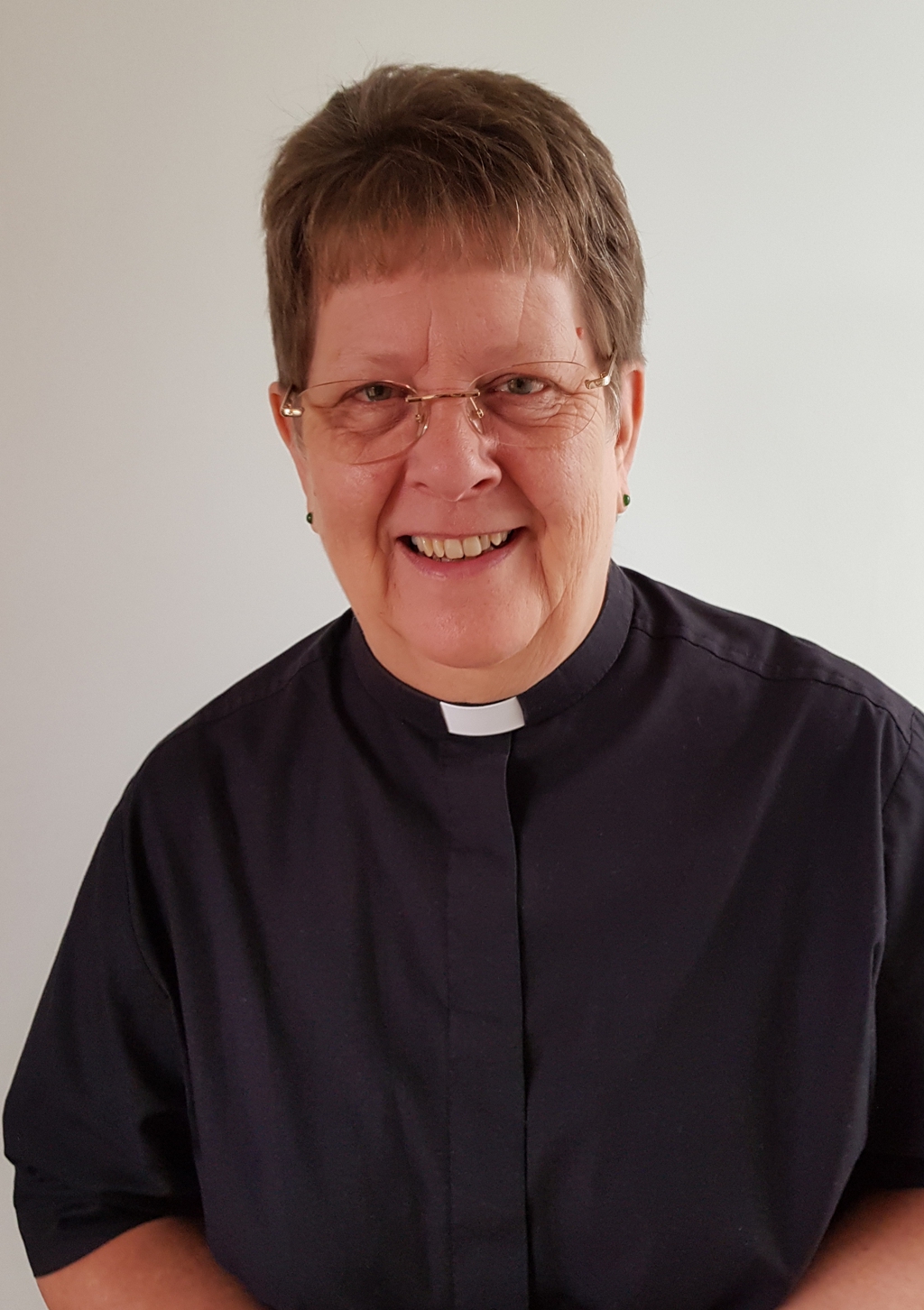 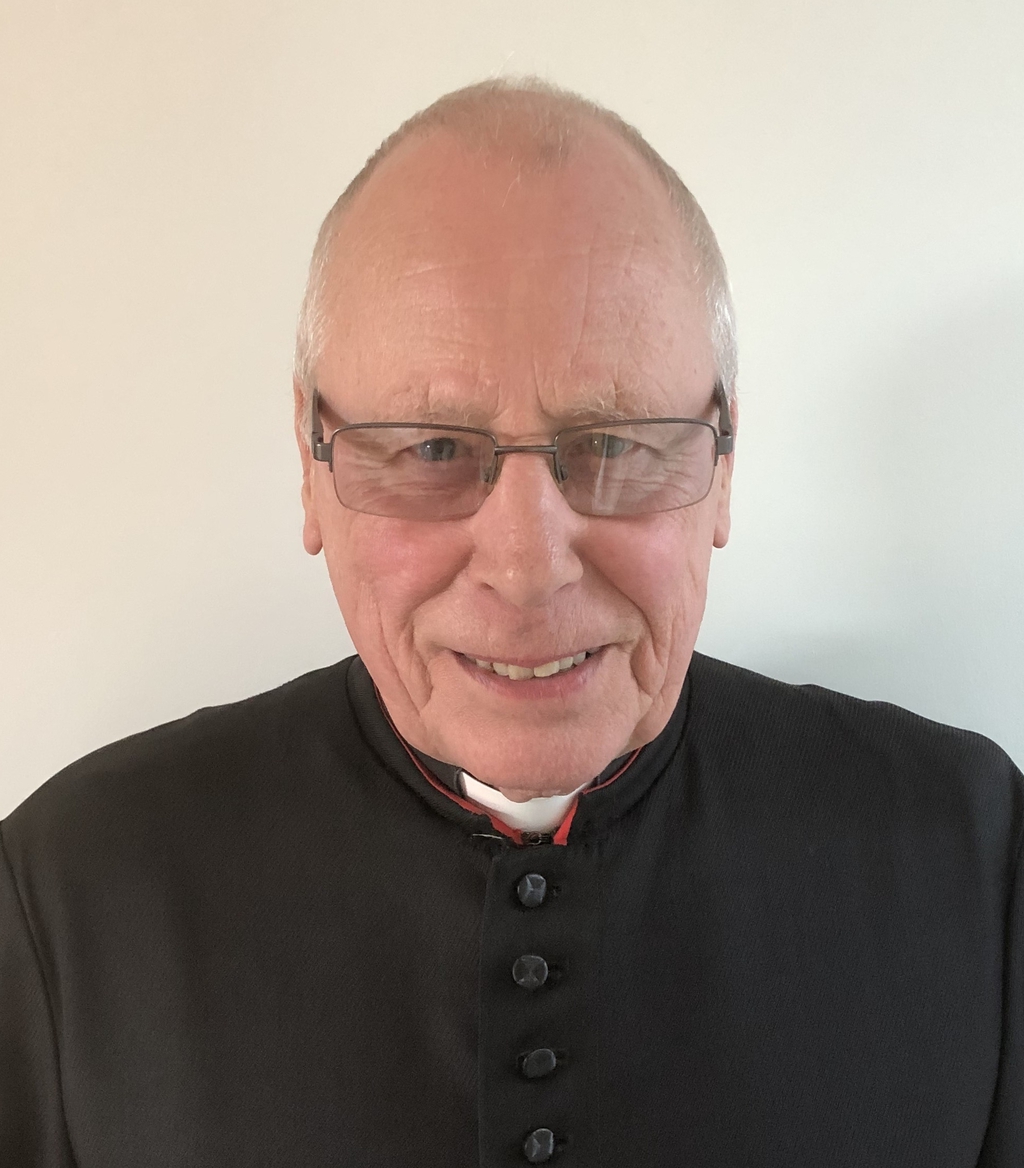 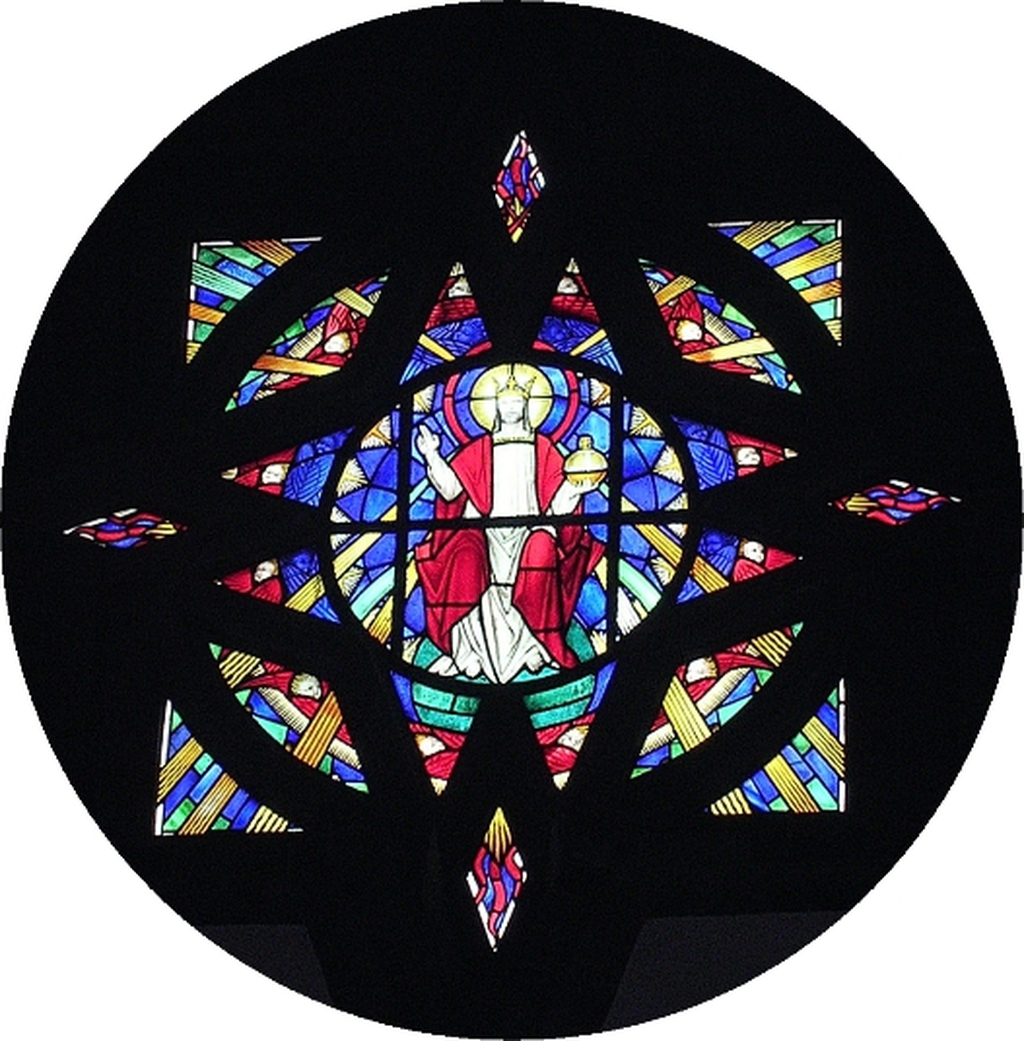 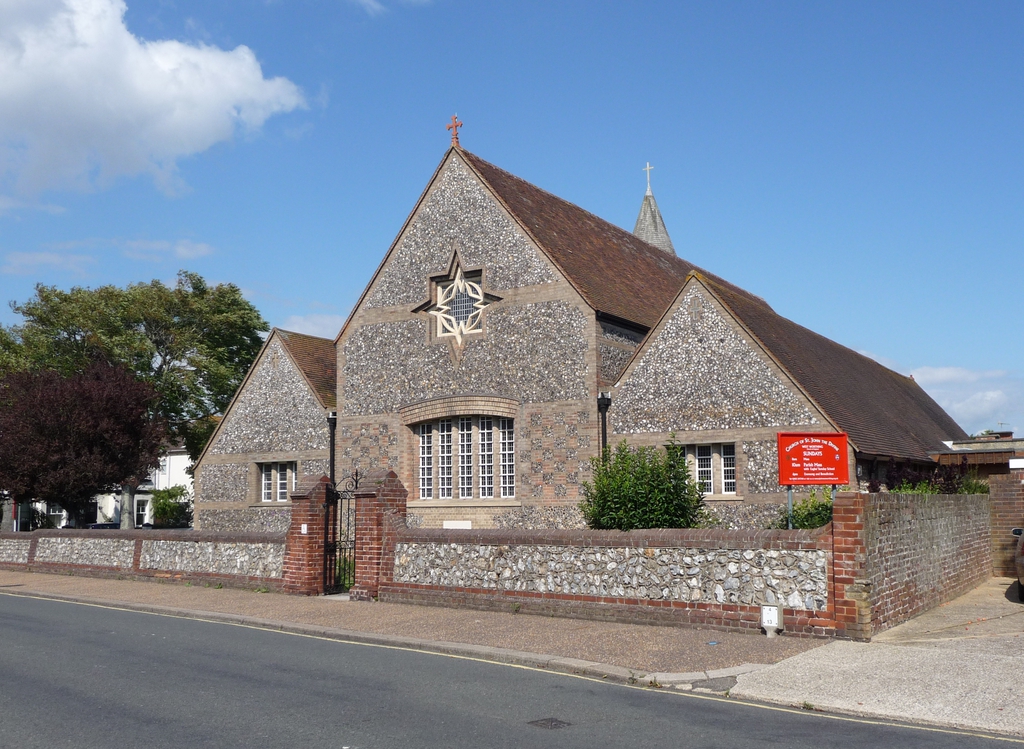 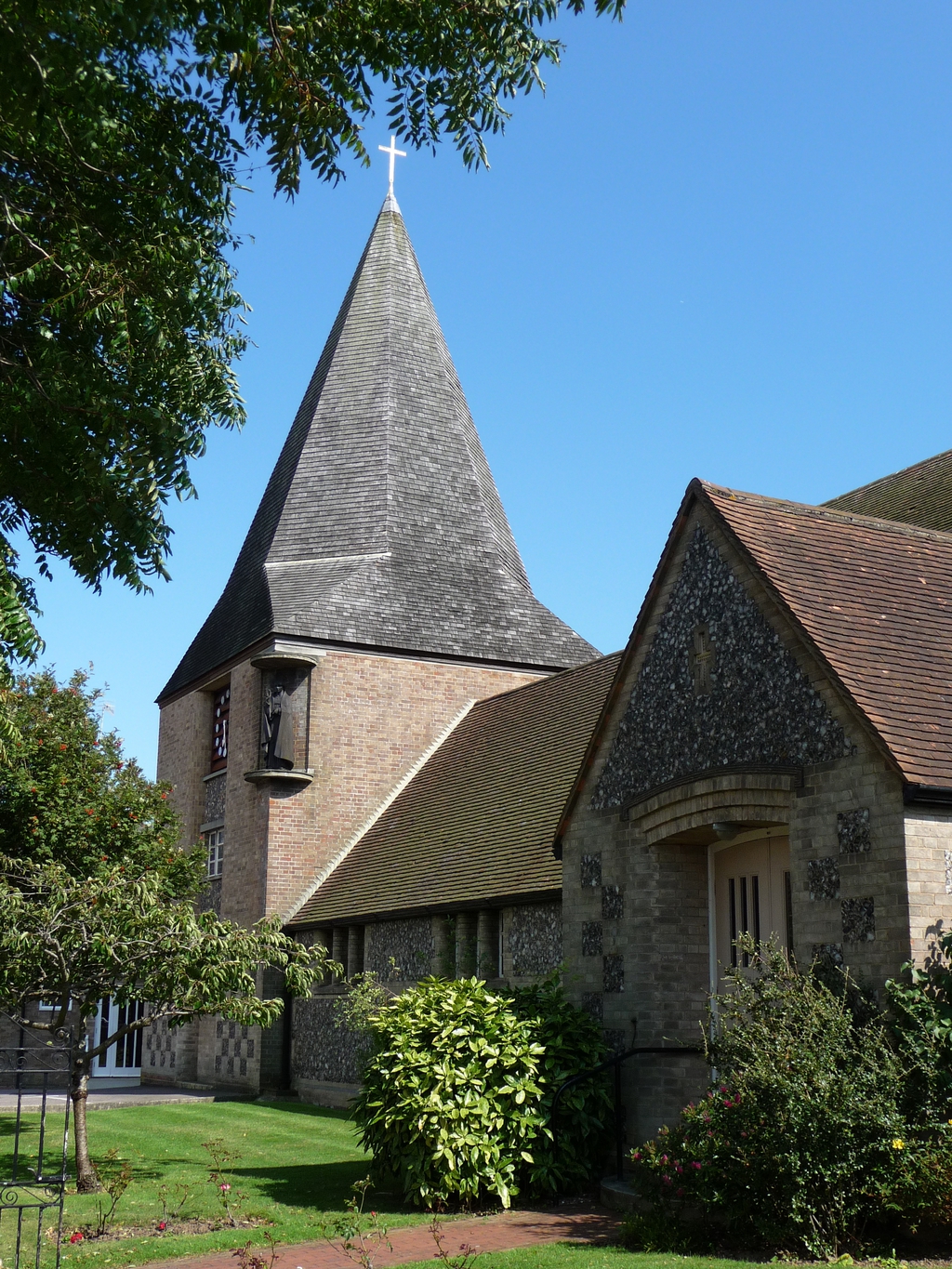 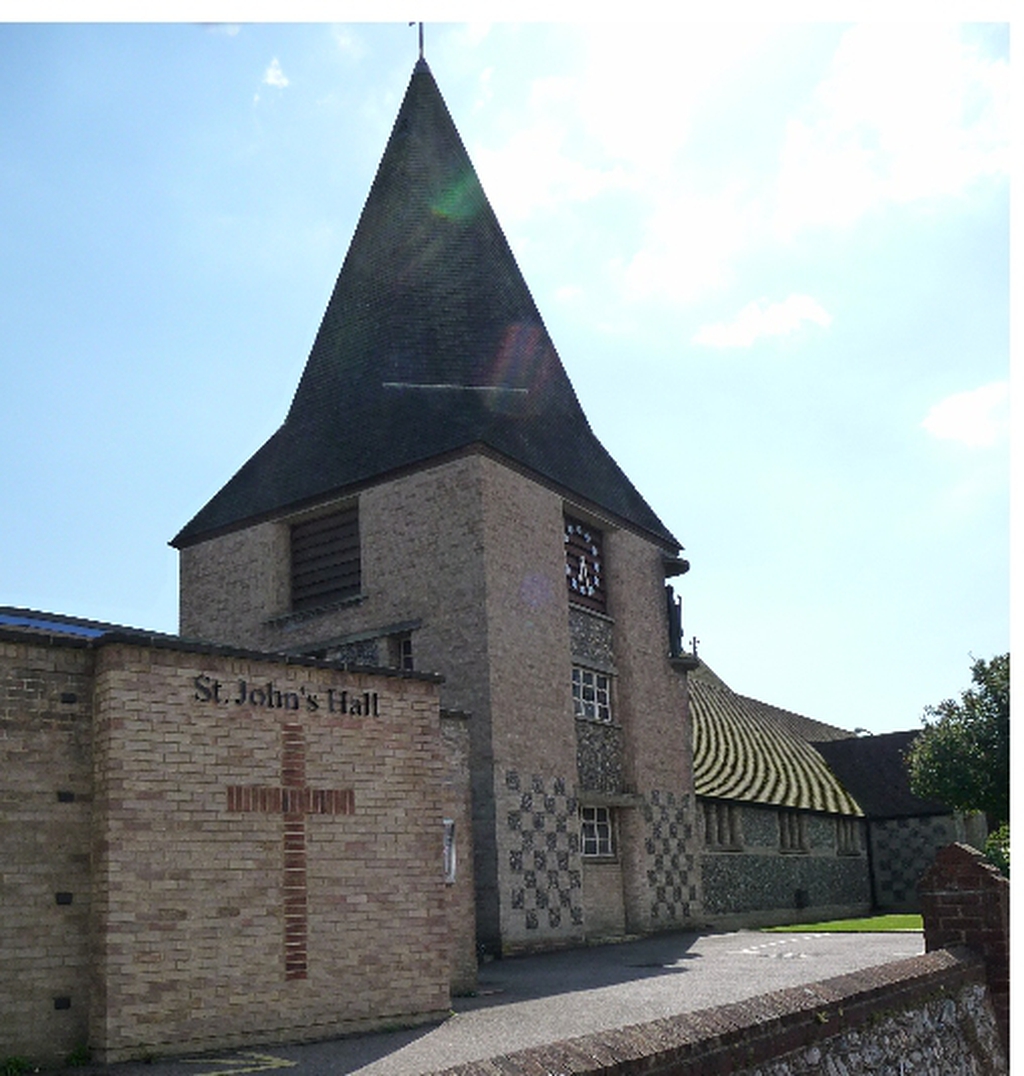 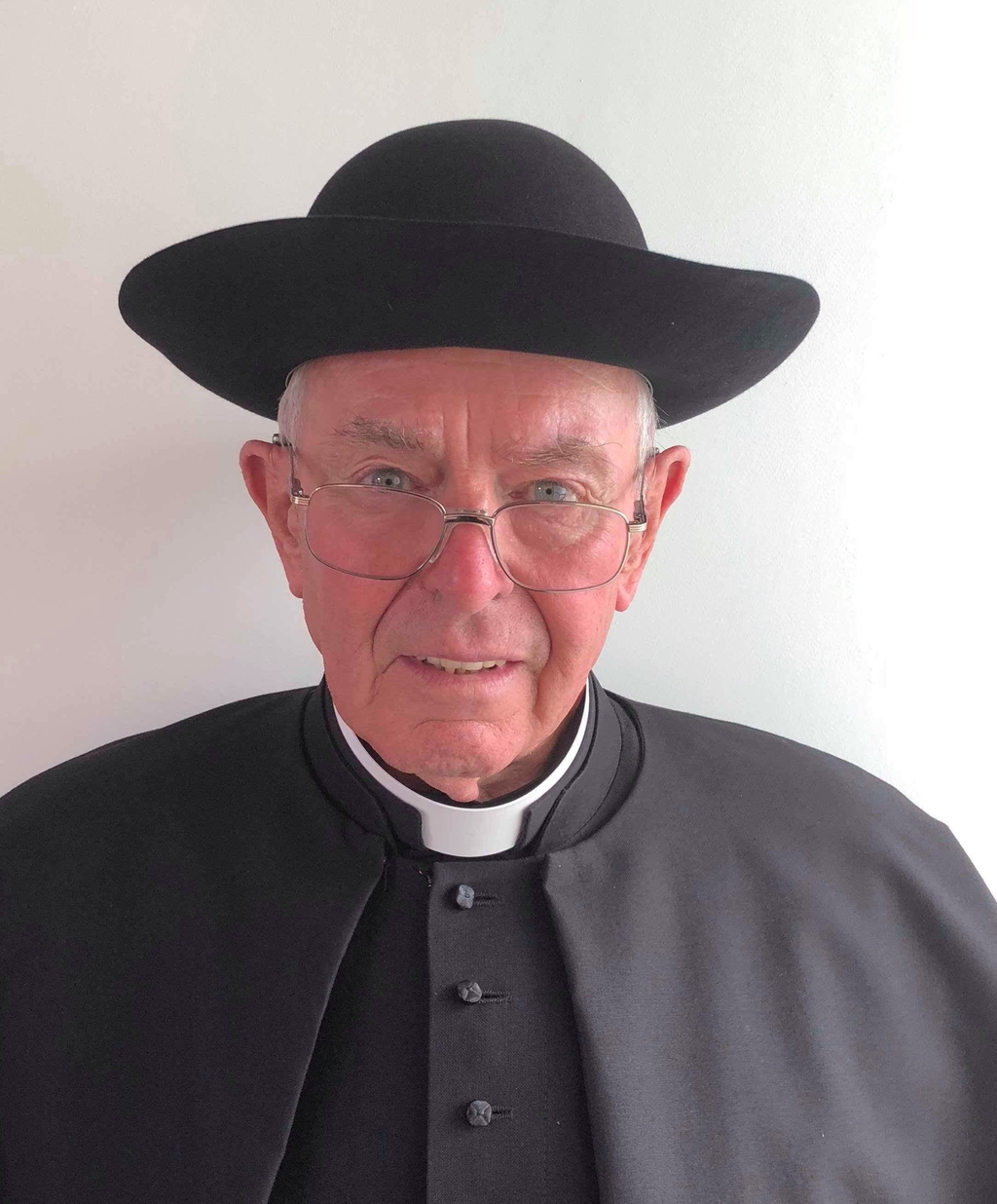 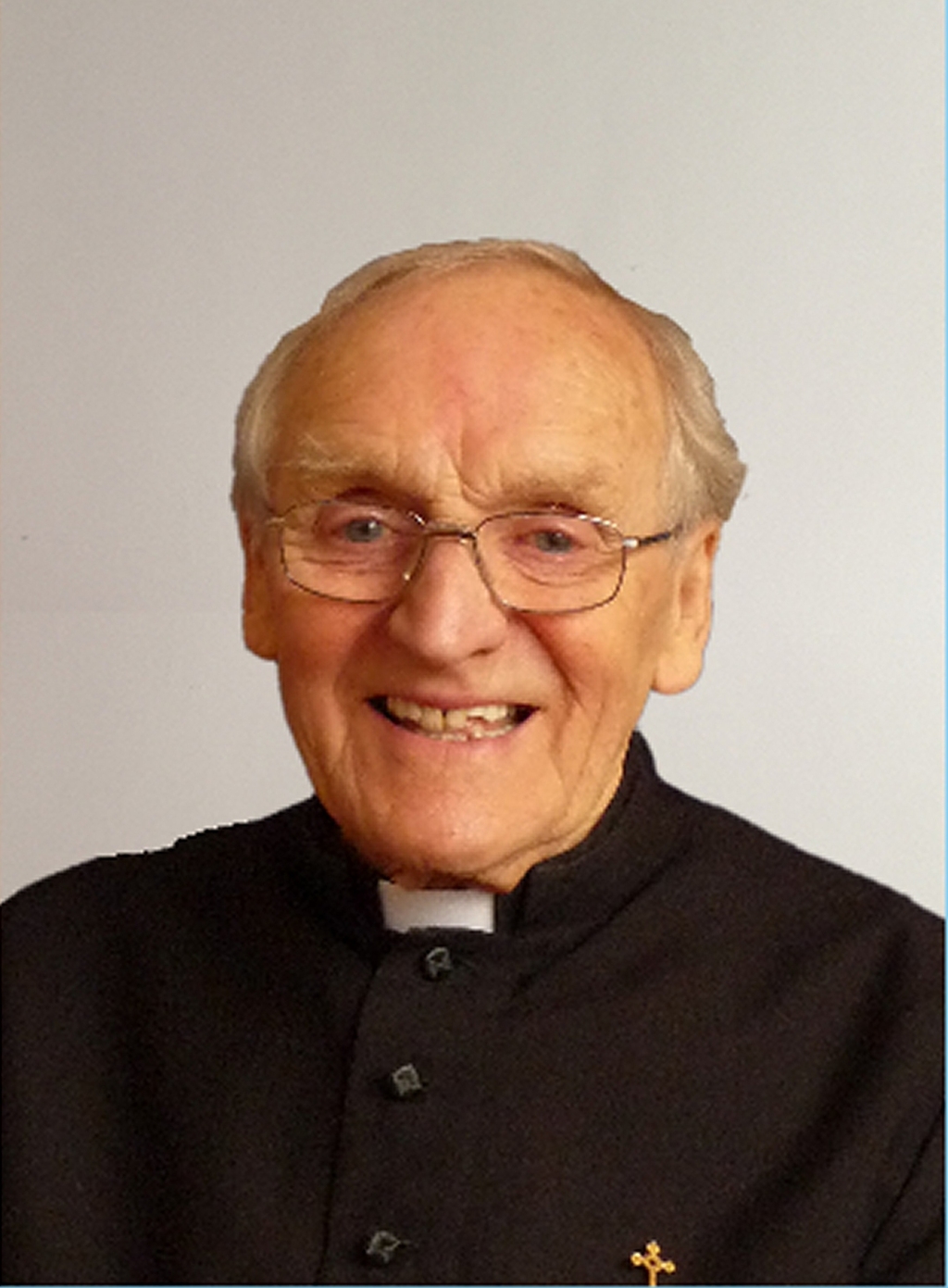 At the end of the nineteenth century, Elm Grove was a growing district in Heene, and the Rector of St. Botolph’s, Heene decided to build a Mission Room for the west of his parish. On 6th January 1901, people worshipped for the first time in what is now the south aisle of the church dedicated to St John the Divine, in West Worthing.

The Mission Room was enlarged by the architect Norman Cachemaille-Day. The foundation stone was laid on 11th December 1936 and the new church was consecrated on 8th October 1937. The Mission Room was incorporated into the building as the south aisle and Lady Chapel.

In 1951, St. John’s area became a Con  The ventional District and St. John’s District acquired a thin slice from the parish of St. Andrew’s, West Tarring. In 1955, the Bishop agreed to St John’s becoming a parish in its own right.

The parish has a population of approximately 11,000, and is bounded by the railway line to the north, George V Avenue to the west, the sea to the south,and Grand Avenue to the east. The church is situated on the corner of Elm Grove and Ripley Road, just north of Goring Road.

The spire was built in 1966 - nearly 30 years after the rest of the church was completed.

Parish church by Nugent Francis Cachemaille-Day, begun in 1936-37, the tower completed in 1966. The church incorporates the Mission Church which opened in 1901 and was extended in 1923 and 1931.

PLAN: The church has a broad five-bay nave extending into a chancel, with a shallow sanctuary, and north and south aisles under separate pitched roofs. The eastern end of the south aisle incorporates the mission church and was designed as the Lady Chapel. The main entrance is through a north porch, a secondary entrance on the south aisle leads to an added glazed lobby. The church has a three-stage north-east tower with a broached spire.

EXTERIOR: The aisles are under separate roofs from the main roof, the inner eaves rising below the level of the nave clerestory, the outer eaves sweeping low over the aisle windows. Aisle windows are grouped in three lights with metal-framed casements with rectangular leaded lights. The west window of each aisle is also a group of three lights. The five-light nave west window is set under a shallow segmental arch faced in coursed brick. The nave gable ends have a square opening with faceted daggers on the cardinal points and tracery which reflects this arrangement. Each gable end has a simple cross. Two-light clerestory windows are barely visible behind the aisle roofs. The north porch is faced in brick and has a flint gable, and flint chequerwork panels, and is approached by three semicircular steps. The entrance has rounded arrises in the manner of the windows. A pair of doors under a coursed brick segmental arch have narrow vertical glazed lights. The tower is brick faced, a change in colour marking the post-war work. The lower stage of the northern face is in chequerwork flint and brick, the eastern face is rendered. Looking down from the north-west angle is a teak statue of St John designed and executed by John Lawson, protected by a semicircular canopy. The centrepiece of the north elevation is set back, with windows spanning the bay, and is more complex than Cachemaille-Day's original design, but was extant in 1937 and has a clock face fixed to the louvres of the bell chamber.

INTERIOR: The interior was laid out for Anglo-Catholic worship. It is light and spacious, and without the longitudinal divisions historically associated with this tradition. It is laid out with a continuous nave and chancel of five bays. Arcades have chamfered piers which are rectangular on plan, with a faceted shaft rising to clerestory window level which supports the wall post of a crown post roof. Arcades have very flat segmental arches with a simple chamfer. A similar broad shallow arch separates the chancel from the Lady Chapel. Aisles have low flat ceilings, on the outer side set above eaves height. Internal surfaces are rendered, with the exception of the east wall which is of exposed brick and set back under a broad-moulded brick segmental arch which marks the Sanctuary. The flanking walls of the Sanctuary are curved, and set into them are an oak credence table in front of a stone piscina and aumbry with an oak door. Above the altar, which has been moved forward from the rear wall, are carved wooden figures of Christ flanked by St John (on the north)) and Richard of Chichester, patron saint of the diocese (on the south), designed by Christopher Webb and executed by Jethro Harris of Oxford. They stand in alcoves which also have shallow segmental arches of receding courses of brick. Both these figures and the Stations of the Cross which line the nave have been repainted. The altar rail, pulpit, choir seating and front rows of the nave seating are in oak, some with raised and fielded panels; clergy seats have curved backs, suggesting medieval choir stalls. The font which is set at the west end of the nave has a plain octagonal bowl on a square stem and stands on a grey stone base. Church fittings include a sanctuary lamp, altar cross and candlesticks designed by Cachemaille-Day. The organ was installed in 1991; the original had been replaced in 1972.

HISTORY: To cater for the growing population of West Heene, in 1900 a mission church was built in the parish of Heene on the corner of Elm Road and Ripley Road, opening, with a Sunday School, in January 1901. In 1923 a chancel was added, and in 1931 a vestry, providing in all a building which could accommodate approximately 200 people. The vestry was converted to a Meeting Room in 1991. By 1934 plans had been drawn up to build a larger church on the site to seat 400-500 hundred people, for which construction began in 1936 to designs by NF Cachemaille-Day. He incorporated the Mission Hall in the new building to form the Lady Chapel. The body of the church and the lower stage of the tower were completed for its consecration in 1937, but the upper stages and steeple were not built until 1966. Work has continued on the church since the Second World War, completing the original vision for the site. The adjacent church hall was built in 1961 replacing the temporary hut, and in 1990 an interior glass porch was installed in the south aisle.

NF Cachemaille-Day FRIBA (1896-1976) was an eminent church architect whose prolific career and individual projects straddled the Second World War. He was chief assistant to Henry Stuart Goodhart-Rendel (later President of the RIBA), before forming a partnership with Felix Lander and Herbert Welch. He set up independently in 1935. Notable work includes the churches of St Nicholas, Burnage, Manchester (Grade II*); St Barnabas, Gloucester (Grade II*); and the Church of the Epiphany, Leeds (Grade I).

The Church of St John the Divine West Worthing is listed at Grade II for the following principal reasons:

* The church was designed, complete with fittings, by the eminent church architect NF Cachemaille-Day to harmonise with the local Sussex landscape.

* It is a significant example of an inter-war church, completed to an original design, in 1966.

* The development of the church site is significant to the history of the area.

This text is from the original listing, and may not necessarily reflect the current setting of the building.