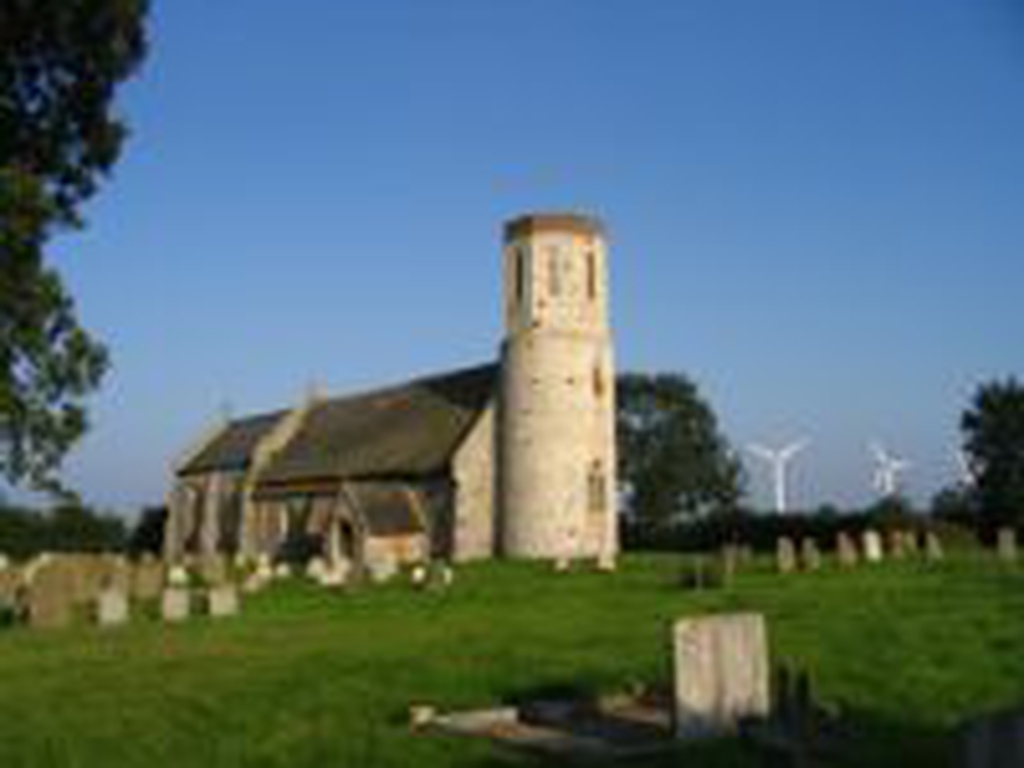 Welcome to this ancient and atmospheric church. People have worshipped on this spot for at least 900 years and, like most medieval churches, the building possesses craftsmanship from various dates and periods.

Standing on a slight rise above the village, St Mary's church dates back to Norman times. It has a round tower with octagonal top, a thatched nave, a magnificent chancel, and contains fine examples of 14th century wall-paintings, and a medieval pulpit and screen. In the graveyard is the massive tomb of Robert Hales, the Norfolk Giant, a Victorian celebrity who was seven feet six inches tall. The nave and porch was re-thatched in 2009, leaving the church looking truly splendid. The restoration of the medieval wall-paintings is the Parochial Church Council's next project.

The church is open daily. We warmly welcome visitors to our church and services.

On October 22nd St Mary’s Churchwardens Pauline Burckitt and Simon Peasley received the prestigious English Heritage Angel Award for 2012 for the best rescue or repair of a historic place of worship. At a glittering awards ceremony at London’s Palace Theatre, hosted by Clare Balding, Pauline and Simon were presented with their award by television personality Graham Norton. Simon and Pauline were accompanied at the awards ceremony by Gary Burckitt, St Mary’s architect Nick Warns and master thatcher Mick Aldred.

In their interviews for the press Simon and Pauline praised all churchwardens and other volunteers who work so hard, and are often un-heralded and un-recognised, as they rescue, repair and maintain historic places of worship for all faiths. They also gave thanks to the many local skilled architects and craftsman who had worked on the 4 major restoration projects at St Mary’s during the last 23 years.

St Mary’s West Somerton and its 14th century wall paintings give untold pleasure to the thousands of people who visit and the local community who worship there. However, dampness from the roof and walls meant that the paintings would be lost forever if something was not done. And so, in 1989, began a daunting long-term project to ensure the building was sound and that conservation of the wall paintings would be possible and practicable. The stripping of old rendering revealed blocked in doors and windows, the doorway arch being made of re-used Roman bricks. In 2000 the round tower and its 13th century inscribed bell, which is probably the oldest in Norfolk, were restored. In 2005 the chancel and east window were restored and in 2009 the nave and porch re-thatched, stonework and timber beams repaired and a new drainage system installed. With the new roof and repaired walls the paintings within can now be preserved.

English Heritage’s judges recognised the long-term dedication and foresight of Pauline and Simon in undertaking the long programme of work necessary to reach the point where conserving the wall paintings is now possible. The English Heritage Angel Awards are co-funded by The Andrew Lloyd Webber Foundation and supported by The Telegraph.

West Somerton is a small village of fertile farmland and low lying grazing marshland, situated ten miles to the north
of Great Yarmouth, between the coast and the Norfolk Broads. The Staithe, in the heart of the village, gives access to the River Thurne and is a popular mooring spot for holiday makers.

A people’s art for a people’s faith - Of around 10 thousand medieval churches, fewer than 10% retain significant remains of their original wall-paintings. For every extant wall-painting, innumerable others have been destroyed.

Wall-paintings were a unique art, complementing, and yet distinctly separate from other religious imagery in churches.  They added a visual sheen to a church, defining and honouring it as the House of God.

They confirmed the Christian faith of those who saw them and bound communities together in life and after death.  As celebrations of Christian lives and ritual, the paintings provided inspiration for faith and personal devotion.

For centuries, generations of Christian worshippers drew hope from the visions of courage and redemption that glowed from the walls of their churches and which transported them from the drudgery of daily survival into the company of angels & knights, popes & saints and the Divine made real..  For such audiences, these paintings were not just art, they were indivisible from the art of life itself.

Wall-paintings defined people and places as Christians.  They made churches special & symbolic.  In a world often without colour, wall-paintings made entering a church unlike any other experience.. Their meaning could be social as well as specific.

In a physical sense they belonged to every parish.  They were part of its inherited tradition, its history, the kinship of men and women who worshipped beside them, before them and beneath them.  They embraced generations of audiences, enveloping them in security, love, sacrifice, repentance & renewal.

They gave pride & definition, identity & memory, to a parish and its patrons.

The PCC sees the restoration projects carried out since 1989 as necessary and essential precursors to the   conservation of St Mary’s wall-paintings and ensuring that their heritage is preserved and educational potential fully realised.