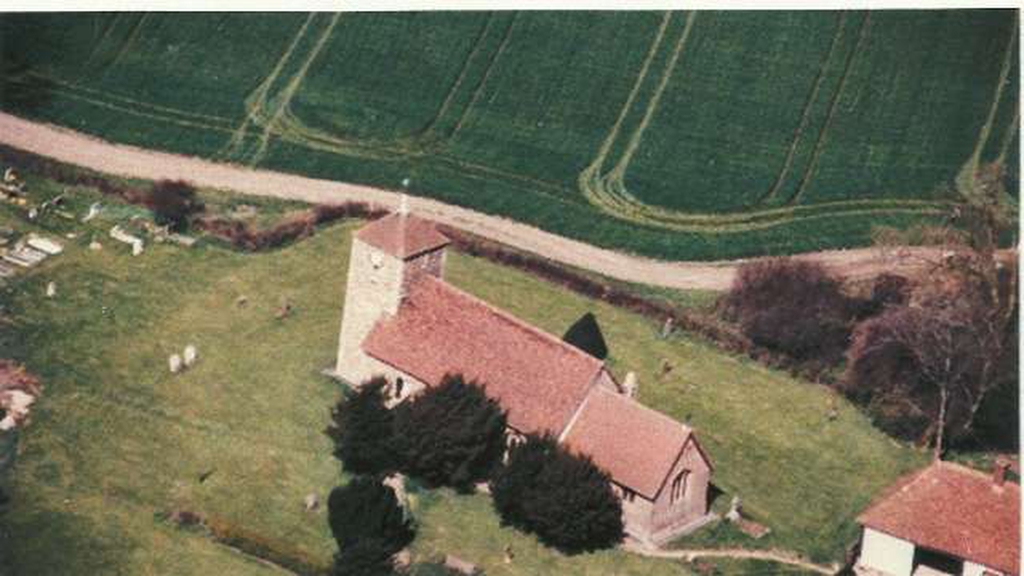 Langley Parish Church stands in a high position for Essex, 450ft above sea level, with fine views over three counties, now mainly corn fields. But even a hundred years ago the countryside was considerably more wooded, especially to the west, where in the Middle Ages about a quarter of the parish was a hunting park. Most of this is now cultivated as Langley Lawn Farm.

Most of the houses are beside the two greens. Lower Green beside the Stort must have given Langley its name - the long "ley" or meadow. Upper Green, one of the biggest village greens in Essex, was used within living memory for grazing the cottagers' livestock. The turf was so close that the cricket spectators were unable to find a bent to clean their pipes.

Langley has always been associated with the neighbouring village of Clavering. There was one principal manor and lordship of Clavering and Langley until the final disappearance of manorial rights in the 20th century. Langley is not mentioned in the Domesday Book, when it must have been simply part of Clavering. But from the 13th century when land here was granted by the lord of Clavering to the Priory of St Bartholomew at Smithfield London, there was also a manor of Langley Hall. After Langley Hall was confiscated by the king at the Reformation it was bought by William Bradbury.  The Bradbury family, originally from Derbyshire, were gentry in this part of Essex, having made money in trade and the law in London. They and other families like them were the commuters of the 16th and 17th centuries between their chambers in the Inns of Court in London and their substantial farmhouses in this area.  The present farmhouse of Langley Hall, to the east of the church, was built in the early 17th century. In its setting of barns, dove-cote and pond, seen from the way to the church, it makes one of the prettiest views in Essex.

The churches of Langley and Clavering have always, except for the period between 1875 and 1930, shared a vicar. Before the Reformation the vicar was appointed by the Priory of Prittlewell. After the Reformation this right and the tithes which went with it, were transferred to the charitable foundation of Christ's Hospital. There may have been a church here in the 11th century, according to a legend concerning the visit of Edward the Confessor king of England before the Norman Conquest. He is supposed to have attended the consecration of a "chapel" in Clavering, which may well mean the off-shoot or "chapel" of Clavering church, which was the official status of Langley church till 1875. On this occasion Edward gave a ring to a poor pilgrim. Years later the ring was returned to the king by other pigrims to whom St John the Evangelist had appeared in the Holy Land giving them the ring with the message that he would meet the king in paradise within six months. The story was not written down till Edward's canonisation, a hundred years after his death, but surely there is some authentic tradition behind it. Langley church is dedicated to St John the Evangelist. In the 13th century Henry III ordered the sheriff of Essex to pay for the painting of the episode on the wall of the chapel and the chaplain was to have £50 a year to celebrate mass daily. Until the Reformation there was a ruby ring in Edward's shrine in Westminster Abbey, supposed to be the very one and the story is one of those carved on the 15th century screen behind the high alter in the Abbey.

The earliest parts of the present church building are from the 12th century. These are the south doorway, the similar but filled-in archway opposite in the north wall and the small window in the north wall. Imagine the nave and chancel with only small windows like this and you will have an idea of the first church.

From the late 15th century or early 16th century is the double-hammer beam roof of the nave, richly carved with folded leaf decoration. This is all that remains of the church from before the Reformation. The chancel was entirely rebuilt of brick in the second half of the 16th century. Brick was then becoming a fairly common building material, especially in areas like Essex where there was no good building stone. The east window has the royal Stuart coat of arms from the 17th century. The Communion table too is from the 17th century.

The Archdeacon's Visitation Reports around 1700 show the church is in a poor state. Dirt and rubbish were to be removed, the roof and seats were to be repaired, the three bells were all out of order, the Common Prayer Book was falling to pieces. We do not know what improvements were then carried out, but by 1883 the church was again in urgent need of repairs. The application for a faculty to do the work says that the masonry was crumbling, the building damp and the fittings decaying. It was then that the church was thoroughly restored: the porch, the vestry and the top of the tower were added and the present pews and pulpit were installed.

On Tuesday May 5th 1885 Langley Church was re-opened, a large and distinguished congregation attended the service, the Bishop of St Albans preached the sermon, and the vicar, Rev W Godber, conducted the service with the help of his son (Rev S Godber).  Clergy from as far away as Leicester and Fulham attended.  The offertory amounted to £40.  The total cost of the work was £1200.  In 1980 the quinquennial inspection again showed that a lot of work was required to be done, over the next five years money was raised by the Friends of Langley Church, and the repairs and redecoration completed in time to have the church re-dedicated on the centenary of the previous celebration.

THE BELLS at LANGLEY St John The Evangelist

We are proud of the fact that through the efforts of members of the Langley Band and other friends, the four bells of our tower have recently been put into a ringing condition in the run up to the Millennium.  Before that, although they had been tolled on various occasions, they had not benn rung in the living memory of any of our villagers.

There are a number of structural and engineering problems that have had to be and are still to be solved.  The frame has now been squared up and braced horizontally and vertically - so it doesn't hit the tower fabric.  Sliders, stays and ropes have been renewed.  Lighting has been added to the ringing chamber.

However, there is still much to be done.  The wheels are in poor condition, but useable.  Most imprtant, however is the condition of the bearings.  Many years of tolling and neglect have left the plain bearings and axles asymmetrical in shape and there is some movement of the housings in the beams.  We are currently getting quotes for this work.

The bells are in a very unusual arrangement.  The Treble is at centre front and the order of ropes anticlockwise is 1 - 3 - 2 - 4.  The Tenor bell, which also is struck on the houur by the clock mechanism, weighs 6cwt.

The ringing chamber curtain and rail was kindly given to us by Langley WI.  The ringers' table was given to us by our ringing mentors at Clavering, where Langley Band are being taught to ring, and where we still practise.