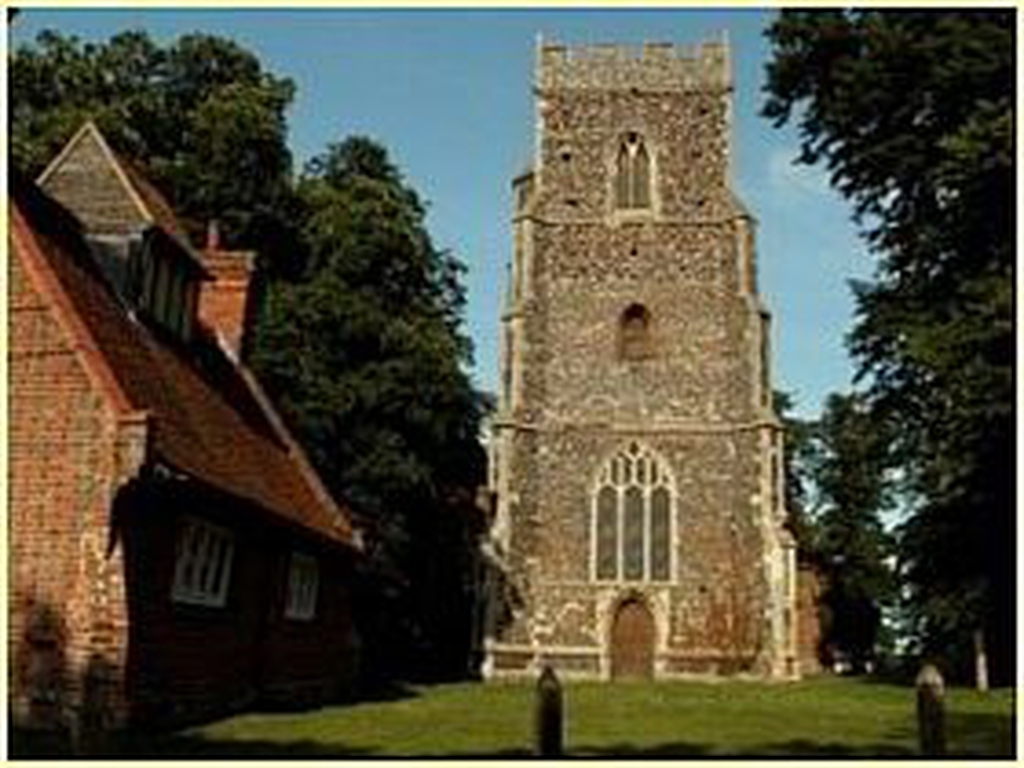 There has been established a Restoration Fund to help fund the serious repairs required for St Mary the Virgin Church. See ways to help above. Also you can e-mail [email protected] .Thank You, The PCC of St Mary, Little Bentley.

Everyone is welcome to join us at all our events and services.

The Church of St. Mary the Virgin holds the history of the parish in its masonry. The Nave and Chancel are of Norman origin and Roman brick quoins are incorporated into the Chancel. The three tall lancet windows at the east end of the Chancel are 13th Century, also the lancet windows of the north and south walls. There is a 15th century window on the south side and the third window, set low, is 16th Century. The archway into the North Chapel is 13th Century and there is a hagioscope or “squint” cut into the east respond. The Chancel has a beautifully painted Victorian barrel ceiling. The Nave has seven hammer beam trusses - mostly elm -and these are carved with angels holding shields although have been very much defaced during the Civil War. There are massive 15th Century pillars dividing the Nave from the North Aisle and in the south wall is a stairway cut in the 16th century which led up to a Rood Loft or Candle Beam. The use of the Rood Loft for Religious festivals was forbidden in the reign of Elizabeth I and the beam was removed. Later the top of the stairway was blocked with 17th century bricks. The south window is also 16th century and made of’ brick. The south doorway also of the same date is stone. The North Chapel (now used as a Vestry) has a late 15th century East window and two early 15th century windows in the north wall. In the N.E. corner of’ the Chancel is a beautiful little Niche with ogee head, crocketed and finialed: it has a molded shelf at the bottom. This north Chapel was originally the Lady Chapel. The 15th century western archway has viners resting on a molded corbel carved with leopards faces. Leopards appear in the Pyrton Arms carved on the Font. The North Aisle has three windows in the north wall; the two eastern are similar to the S. E. window of the Chancel. The window to the west and a doorway is c. 1520 - the doorway can be clearly seen on the outside of the Church although the opening is now bricked up. There is also a molded plinth running along this outside wall with trefoil headed panels - the only break occurs where the Priest’s house was removed and the wall made good. The window in the west wall is again similar to that in the Chancel. The West Tower has three stages and was built about the middle of the 15th century; it has an embattled parapet and carved gargoyles. The only graffiti in the Church occur just inside the West Door but it is indecipherable except for the initials “I.S.” and the date - 1608. There is a blocked opening in the north wall of the tower which indicates the existence of a former Ringing Gallery. The South Porch is made of brick and is c. l520. There are mullioned windows on each side which are now blocked and there is a Stoup in the east wall (recess with broken bowl) but the date of this is not known. The parish Chest which stands in the Nave is 14th/15th century. It has a cambered lid and is iron-bound and nail studded. There are three locks; two bolts and a ring handle at each end.

There are five bells in the tower of the Church; the second, third and fourth made by Robert Mott in 1599. The fifth bell was made by Miles Graye of Colchester in 1625 - the year in which he also made one of the finest bells in Suffolk. This hangs in Lavenham Church and is the famous tenor bell said to be the sweetest bell in England.