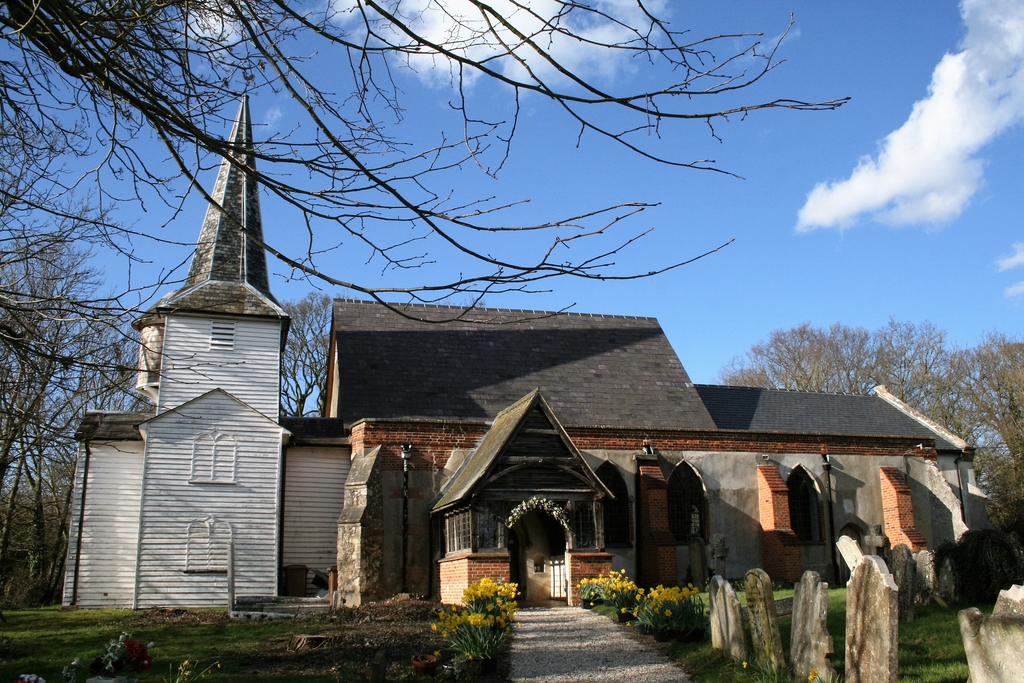 At St Mary and St Edward's we have a regular Sunday eucharist in a relaxed, friendly and supportive atmosphere. We welcome all new-comers be they regular church-goers or not.

We have a vibrant Friends of the Church group who organise social and fundraising events to raise money for restoration work https://www.friendswhchurch.org.uk. Our team of flower arrangers are extremely talented and our friendly choir also enjoy social events together. On major feast days and festivals our local Brownies and village school join with us to celebrate and lead worship.

During recent renovations we discovered early medieval wall paintings. Historic England have used dendrochronology to date our unique wooden belfry to 1383 - 1395. We are currently exploring the possiblilty of full circle ringing our rare set of 4 Miles Gray bells which were cast in 1676.

We provide a home for at least 5 different species of bats.

Why not visit us and join us for worship or find out more about our fascinating history on one of our historic tours (see events tab)? Here is a short history of our church to whet your appetite.

St. Mary’s & St. Edward’s church is a remarkable example of the development of rural Essex church architecture from Norman origins throughout the centuries to the present day. Due to its rather isolated geographical position, several unique and interesting features remain of what was once a medieval manorial church.

In the 12th century the Clovils were the leading family in the village and lords of the manor. Isabel Clovil is thought to have instituted the building of the south aisle in 1330 and likewise John Cloville began the rebuilding of the chancel in 1490. They also probably built and endowed the chantry chapel in the church.

Unique in its cruciform plan, the oak framed, free-standing belfry, abuts the church with its eastern arm of the cross. It is one of the series of six free-standing Essex wooden belfries constructed with 4 vertical posts. C. A. Hewett in his paper ‘The Timber Belfries of Essex(1964) dated the one surviving trefoil tracery, two-light window on the northern side of the tower to 1245.

Records suggest that the belfry was originally covered in wattle and daub but it is now weather-boarded. The octagonal spire was renovated in 1888.

The bells hang on an old frame and are all inscribed: “Miles Gray made me 1676”.

Hewett dated the porch to the second half of C15th, probably the final quarter. A medieval stoop was found on the right hand side of the C14th entrance doorway, during renovations in 1995. Both the C14th south doorway and original massive oak door are also worthy of note.

The nave is originally C12th with evidence of a semi-circular rear arch of a Norman window above the C14th north doorway. The exterior of the north wall also shows its Norman origins as it is built of ferricrete, flint, pebble rubble and Roman tiles with signs of coursing. The Tudor bricks, which were used to infill the site of the stairway to the rood loft during the Reformation, can be seen towards the join with the chancel.

The remainder of the nave illustrates the extensive rebuilding that took place during the C14th. when the Clovilles were lords of the manor. A beautiful, five bay C14th stone arcade replaces the south wall and the large west C14th window was also added.

The 10 feet wide aisle and chapel were built about 1330, probably by Isabel Clovil. The windows are C14th but have modern frames.

Recent underpinning of the south wall in 1978-88, revealed an original east wall and base for the chapel. The south wall rested merely on crushed mortar and pebbles. In addition, the eastern two arcade pillars were found to be only  brick core with ashlar facings  and not solid stone like the western most ones .Thus it seems that the chapel was a later C14th addition to the eastern end of the south aisle possibly occurring after the death of Isabel and her son John Clovil in 1361.

The chancel has been rebuilt several times and the exterior walls on the north and east show the many changes. The original Norman chancel was probably much shorter and with an apse, but the remains of the medieval chancel, constructed of flint, pebble-rubble and pudding-stone, with parts of the stone jambs and sill of the great east window are clearly visible in the east wall. Here too the Tudor brickwork and C19th century work can be seen.

The exterior north wall shows the next rebuilding phase, c.1490-1500, with its mellow red Tudor brickwork.

The collapse of the east end of the chancel in 1831, prompted the Rev. Thomas Brooksby to rebuild the east window reducing the thickness of the surrounding wall. The simple modern glass was given by the Carter family and installed by Rev. C.W. Middleton in 1957 in an effort to return to the original medieval style.

The late C17th rail of heavy balusters, alternately twisted and turned, now at the chancel steps, was once the Communion rail.

The Easter tomb on the north west corner was built in 1490 for John Cloville and his wife Marjory, duaghter of Sir William Allyngton of Kent.

There are some interesting indents; in the south aisle C15th slab of a man and wife; in the chancel that of a priest, C15th, thought to be William Tuckford, in mass vestments. All the inscriptions are missing. The much worn floor slab of John Eardeswicke, 1622, lies in front of the chancel steps, only the Tudor rose at the corners is clear.

This C13th or C14th dug-out Parish chest appears to be unique in its 8ft length and style. It is the longest in the county. It is heavily iron bound and the lid is in two parts with drop handles, two hasps and a money slot. It was possibly given by Ralph de Baldock when he was installed as priest in 1294.

The font is a unique combination of a cut down C14th octagonal bowl above ball flower and heads decoration on a stem with trellis and roundel ornamentation which is sunken into the remains of a much larger C12th Purbeck marble font. This Norman font shows settings for a central stem and four angle shafts and was probably moved from the Norman nave during the building of the south aisle in C14th.

These four large boards with the Lord’s Prayer, Creed and Ten Commandments, are Georgian, and were beautifully written in gold lettering on black background by David Ogborne in 1783.  The Royal Coat of Arms of George III (1813) hangs on the north wall.

The organ was installed in 1857 by Rev. William Kemble. Originally a barrel organ, it is thought to be much older, possibly made by Holditch. Its relatively small size suggests that it may have come from a house. It was converted to a single manual organ between 1902 -05, although it still needed manual ‘blowing’ until an electric blower was fitted in 1971.

The C16th/ early C17th panelling surrounding the organ was placed here in 1888 when the Rev. Tiddeman removed the Musicians loft from the north-west corner of the nave.

These early C19th charity boards are the only ones mentioned by Scarfe (1968) in Essex. They record the bequests left to the poor of the parish by their donors, important and charitable C17th parish families.