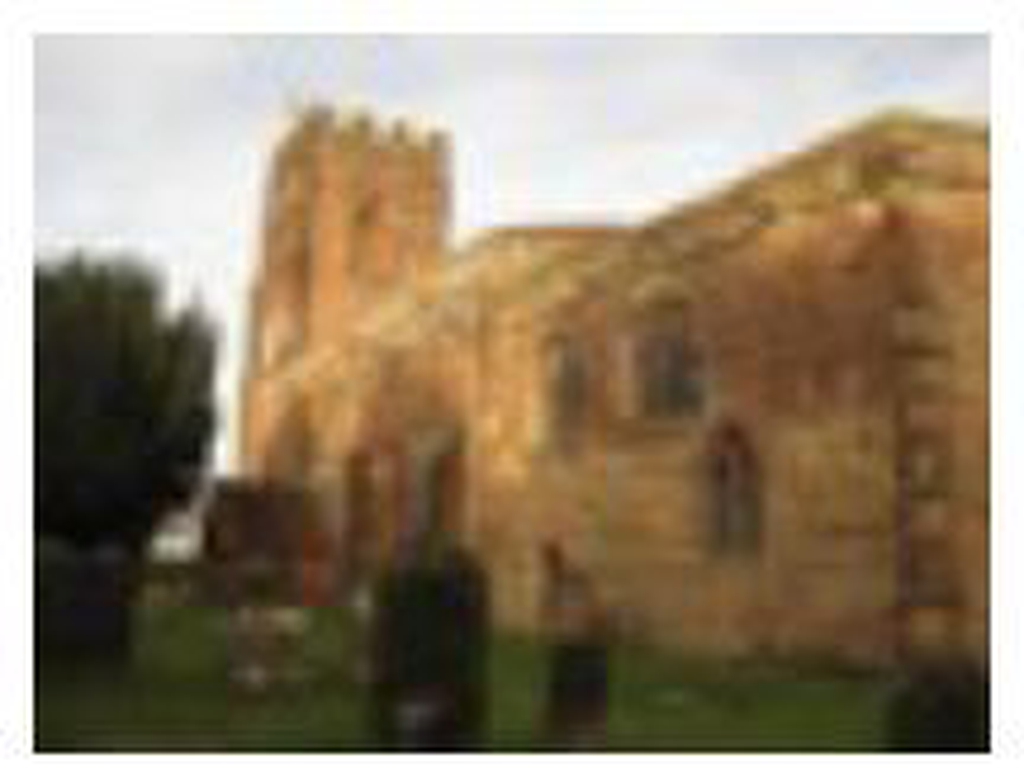 St John the Baptist, Middleton
Services and events
News and notices
About us
Parish Magazine and Newsletter
Find us
Church Lane Middleton North Warwickshire B78 2AN
Get in touch
07498 202262
Facilities
More information
Edit this church

People have worshipped on the site of St John the Baptist in Middleton for well over a thousand years and continue to do so today. There has probably been a church on this site since Anglo Saxon times although no trace of the Saxon church remains. The church was rebuilt in the Norman style, probably towards the end of the 12 th century. The lower part of the nave and the walls of the chancel are part of the original Norman building. At this time the church building would have had a lower, more steeply pitched roof, and no north aisle or tower. You can just see the remains of the Norman windows and door when looking at the south wall of the chancel from the outside, and a Norman “dog tooth” decorated arch over the south doorway, in the porch.

Towards the end of the 13 th century the church was enlarged with the addition of the north aisle which replaced the stone wall with an arcade. The original north door, opposite the present porch, was transferred to the new north wall. It was blocked up in 1875.

In the 15 th century the church was enlarged again with the addition of a tower. A pitched roof was probably replaced by a flatter version supported by higher walls. Raising the roof of the nave and chancel made it possible to install high windows in the clerestory and larger windows in the chancel.

The porch was added in the 18 th century and large scale work was carried in the 19 th century. This included the installation of the present east end window to replace a fifteenth century version. Large areas of the inside of the church were plastered in 1875 according to the current fashion. A vestry in the north west corner of the church was also added.

In recent decades, the Victorian plasterwork began to fall and in 1994 it was removed from the nave. This revealed the remains of some 14 th century wall paintings, particularly over the chancel arch. The nave is now limewashed as it was in the Middle Ages.

On entering the church, turn right and work your away around the building.

The Porch was built in the 18 th century with Flemish bonded brick. It protects the original Norman doorway with its chevron decoration.

Norman Structure If you look east towards the chancel you will notice the thick lower Norman section of the nave wall.

So then you are no longer strangers and aliens, but you are citizens with the saints and also members of the household of God, built upon the foundation of the apostles and prophets, with Christ Jesus himself as the cornerstone. In him the whole structure is joined together and grows into a holy temple in the Lord; in whom you also are built together spiritually into a dwelling place for God.

The Nave Windows to the east of the door and above the thick wall vary in age but have been restored and fitted with stained glass in the 1890's, possibly by Kempe. The window depicting Paul, Peter and Barnabas is in memory of Esther Peel who dies in 1887. She is buried in the churchyard under the golden yew with her husband, John Peel, who died in 1872. The window depicting the Ascension is in his memory. The Peels were sometime residents of Middleton Hall.

The Pulpit probably dates from the end of the 17 th century.

The Chancel Screen is an outstanding example of a fifteenth century oak screen and is full of symbolism. The nave (from Latin navus: ship), where the congregation gathers, reminds us of the church as a ship (like Noah's Ark ), carrying Christians safely through this earthly life, after which they pass though death (the skulls on the screen) to the life with Christ (flowers on the reverse of the skulls). The screen symbolises going to meet the risen Lord Jesus, and this fellowship with Christ begins in the Holy Communion.

The Wall Paintings are 14 th century and were probably introduced at the same time as a rood screen. They were probably meant as a background to the screen, the only recognisable areas being two horizontal bands. The upper band shows a series of buildings, probably representing Bethlehem or Jerusalem . This may have been the base of a larger picture, perhaps ‘Christ in Glory' when the church had a pitched roof. The lower band has a floral design.

The Bingham Brass lies in the middle of the chancel, under a carpet for protection. It is an almost life size 15 th century brass memorial to Sir Richard Bingham and his wife Margaret. It is unusual to have a brass depicting both husband and wife. This was probably due to the fact that the Middleton estate was left to Margaret by her first husband, a member of the Willoughby family. The Latin inscription on the brass is: Here lie Sir Richard Byngham Knight and Justice of the King's Bench, who died 22 nd May AD 1476 and the Lady Margaret; to whose souls God be merciful. Amen.

The Ridgeway Memorial on the right is in memory of Lord Edward Ridgeway from the 17 th century. The gauntlet and helmet may well have been used in his funeral procession.

The wooden Vere Hodge Tablet in the Sanctuary commemorates the father and son who were successively vicars in Middleton from 1835 to 1936, and whose diary provides an invaluable history.

The Willoughby Gravestones form the floor of the sanctuary, underneath the altar and show a long link with Middleton Hall.

The East Window is 19 th century stained glass, celebrating the Resurrection. It was given in memory of John Frederick Young M.A. who died in 1865.

The Fitzherbert Recess on the left is the earliest monument in the church, and the small brass plate has a Latin inscription to Dorothy Fitzherbert, daughter of Sir Henry Willoughby and wife of Anthony Fitzherbert, who died in 1507.

Therefore, since we are surrounded by so great a cloud of witnesses, let us also lay aside every weight and the sin that clings to us so closely, and let us run with perseverance the race that is set before us.

The Squint was often thought to enable lepers to watch the service, but this is doubtful. It may have been to enable those in the north aisle to follow the Communion service.

The White Memorial at the west corner of the north aisle is in memory of Samuel and Benjamin White, sons of Samuel White, whose charity built the six almshouses in the village.

The Wall Painting on the upper section of the west wall of the North aisle, near the White Memorial, is of Christ in Judgement c. 1300.

The Tower was built in the fifteenth century in the perpendicular style of red sandstone. It houses a rare 14 th century wooden bell frame that accommodates three bells, recast in 1826. There are drawings of the church with a wooden spire but this has long since been removed.

The West Window depicting the Annunciation, Nativity and Epiphany is in memory of Ann Peel, daughter of Mr and Mrs A. Peel, former residents of Middleton hall. Ann was drowned in a sailing accident in 1887.

The Bell Ringer's Misdemeanours are set out on the 18 th century panel in the tower.

The Font was given by the Revd Henry Vere Hodge in 1848 in memory of five of his children who died in infancy. It is still in use today.

The Nave Clerestory Window high up in the south wall are probably 16 th century. One contains glasswork in memory of a recent churchwarden, George Simmons.

Walking clockwise around the church from the porch.

Grooves in the Sandstone may be seen along the south wall where the stone has been used to sharpen implements.

The Tower Stonework includes a niche on the south side which would have held a stone figure until the Reformation. The West door and windows are marked by stone crocketed hood-moulds with the usual carved monster “stops” at each end.

The Probable Medieval Manor House Site may be found by walking to the west through the churchyard until the land dips down towards a hollow. This is the corner of a ditch surrounding a flat raised platform which is principally under the Community Centre, formerly the village school. This manor house predates the present Middleton Hall.

The North Aisle External Wall . As you retrace your steps and continue around the church you will notice the 19 th century windows set into the 13 th century wall. It is possible to distinguish the two levels of the building by tracing the differences in stonework. Note the 13 th century nail-studded door, which remains, even though it has been walled up from the inside.

The North Chancel Wall contains a Norman window which has been blocked up, but whose outline is still visible. The various types of masonry make it possible to trace the height of the Norman church.

The South Chancel Wall is faced with a late 18 th century ashlar veneer, but the original masonry is still visible. In the 14 th or 15 th Century, a “priest's door” was inserted, requiring the infilling of a Norman window, whose outline is still visible.

The Churchyard includes the base of a churchyard cross dating from the 13 th century, about 15 meters south of the church building. The churchyard is surrounded by a 17 th century sandstone wall, with chamfered plinth, with substantial 19 th century repair work.

For More details please look at our website http://threeinoneparish.org/

Church Lane
Middleton
North Warwickshire
B78 2AN
B78 2AN