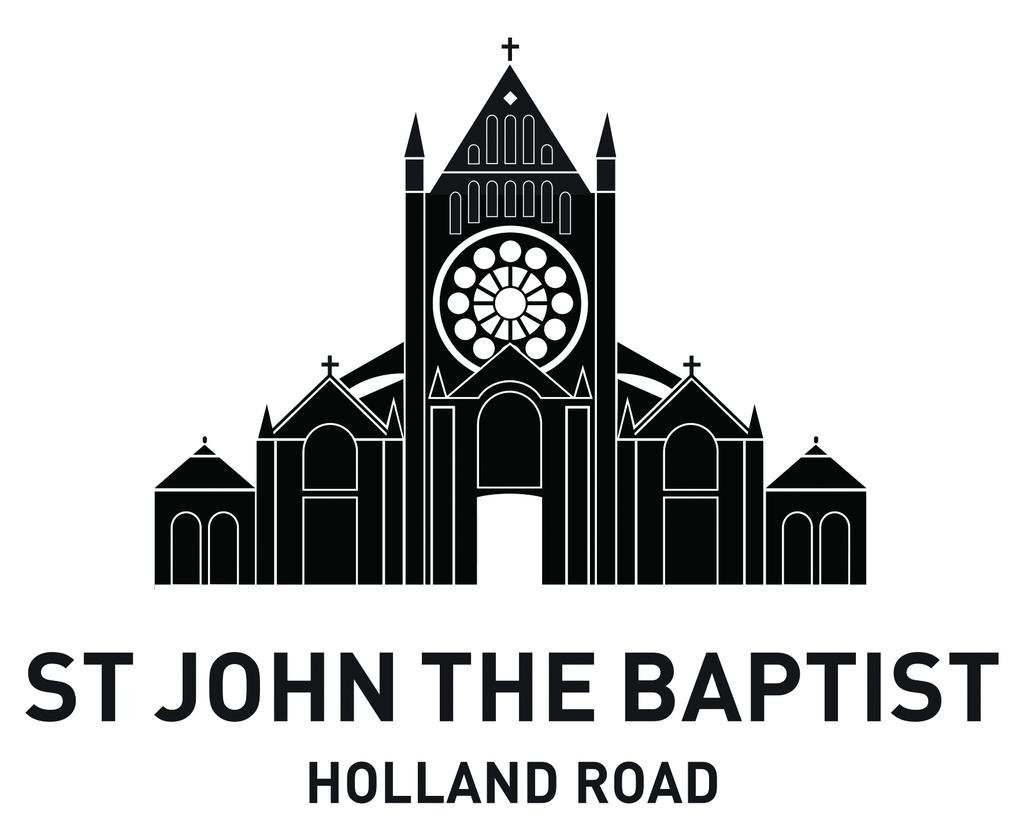 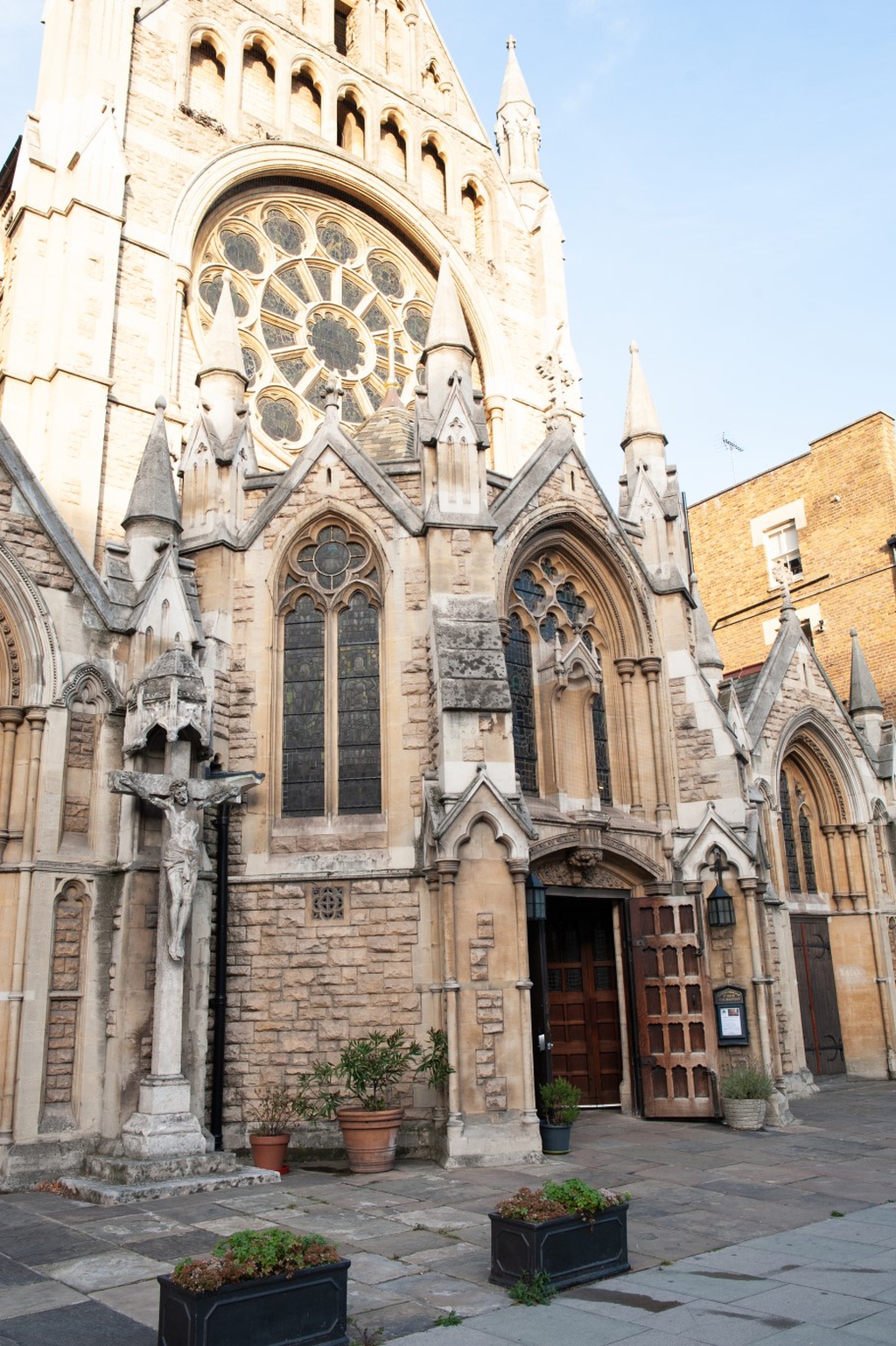 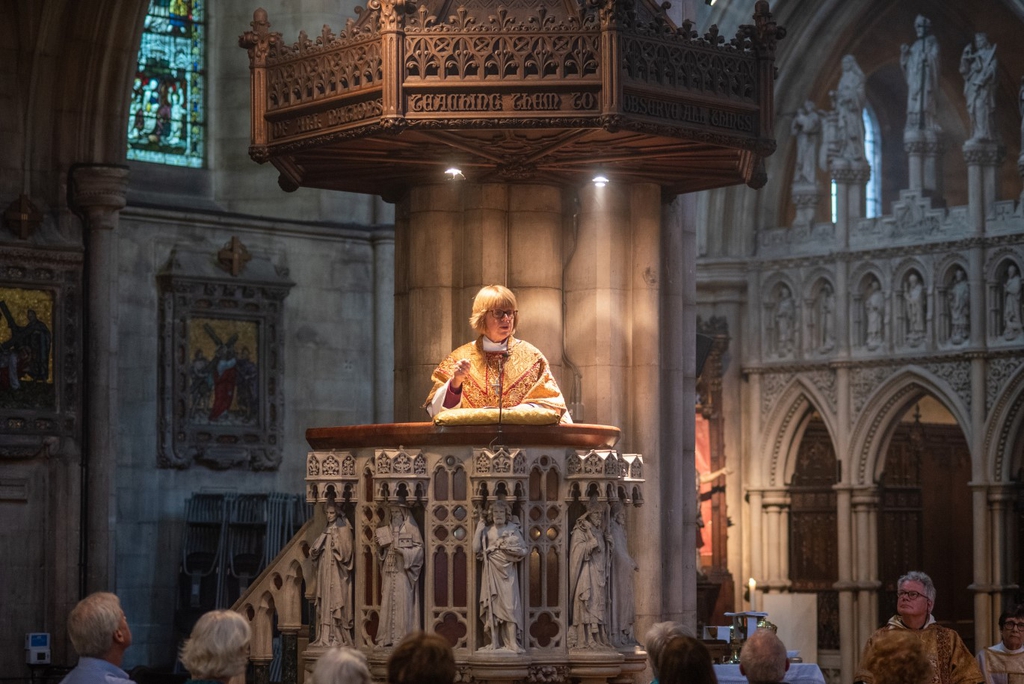 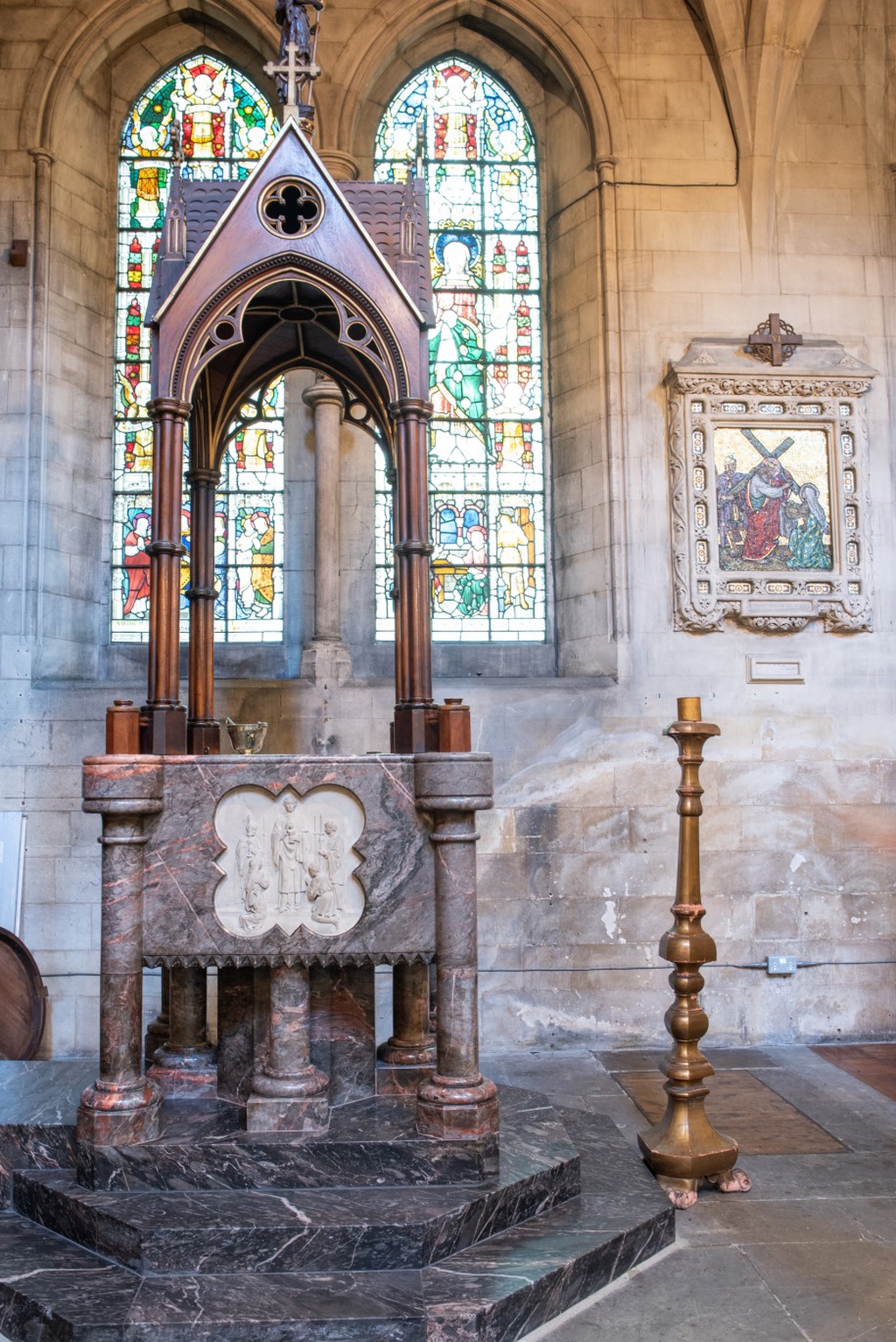 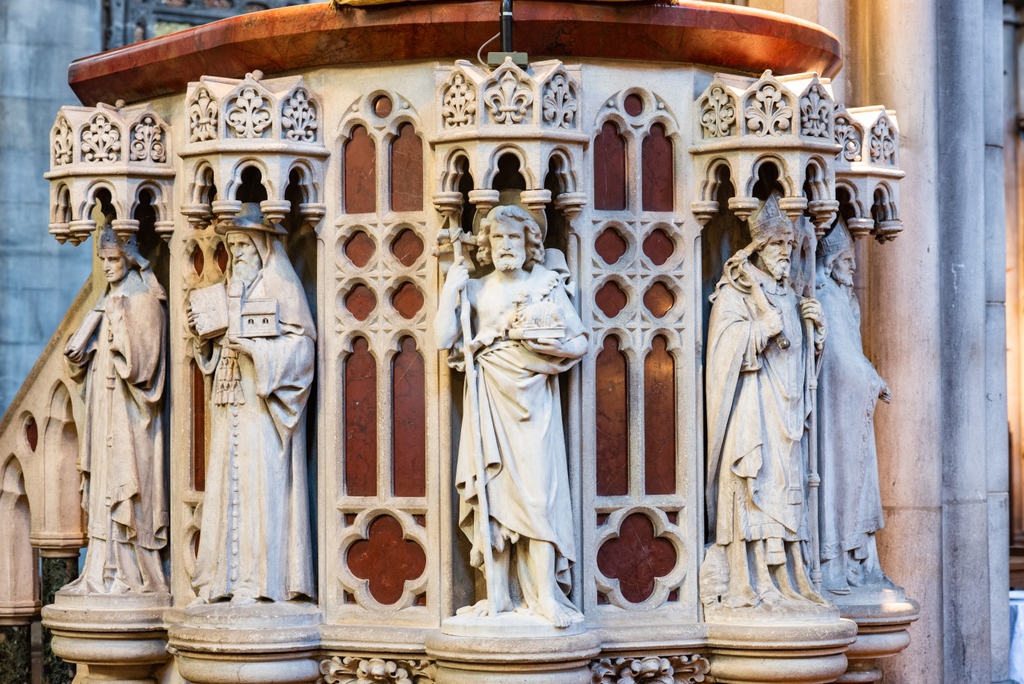 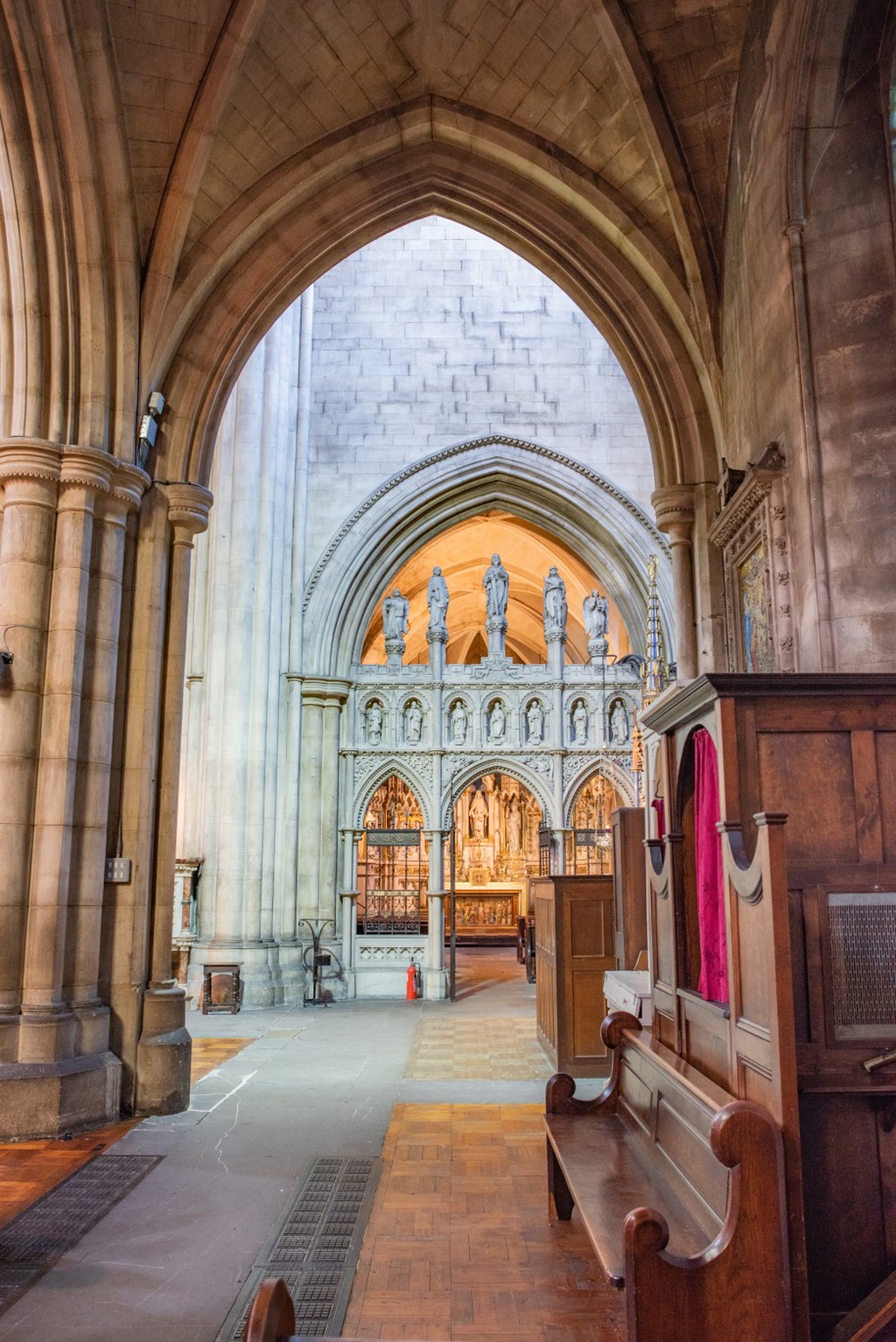 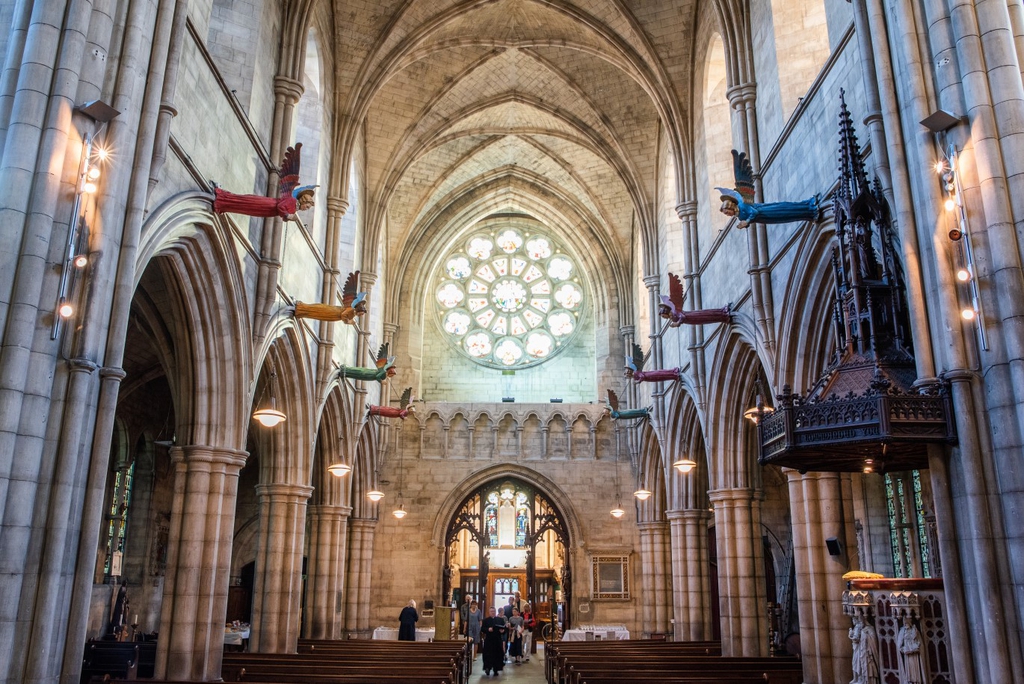 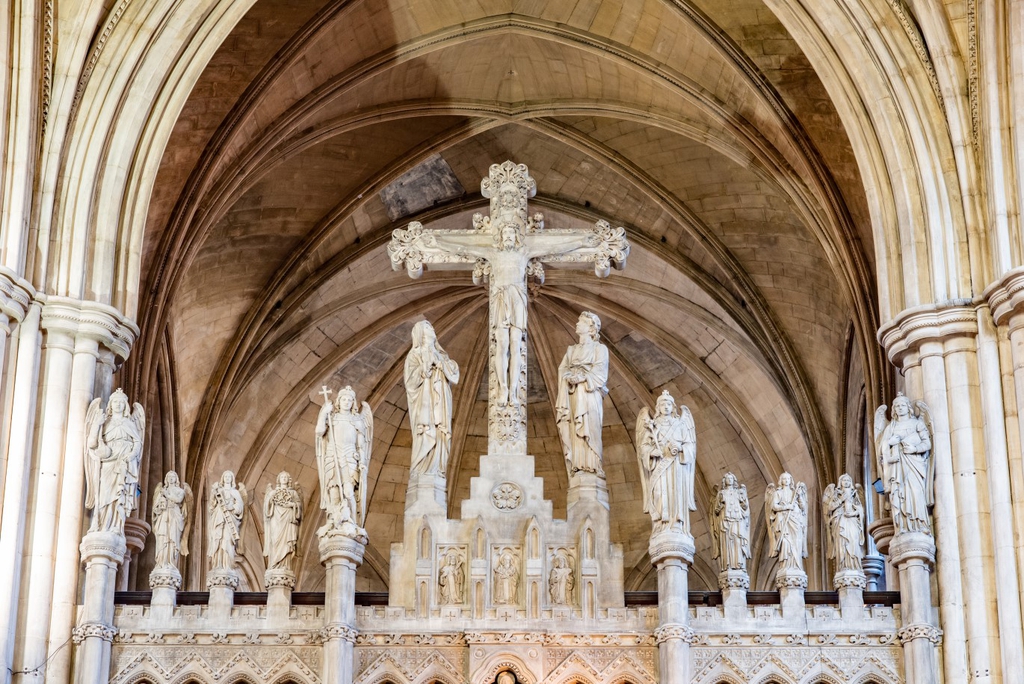 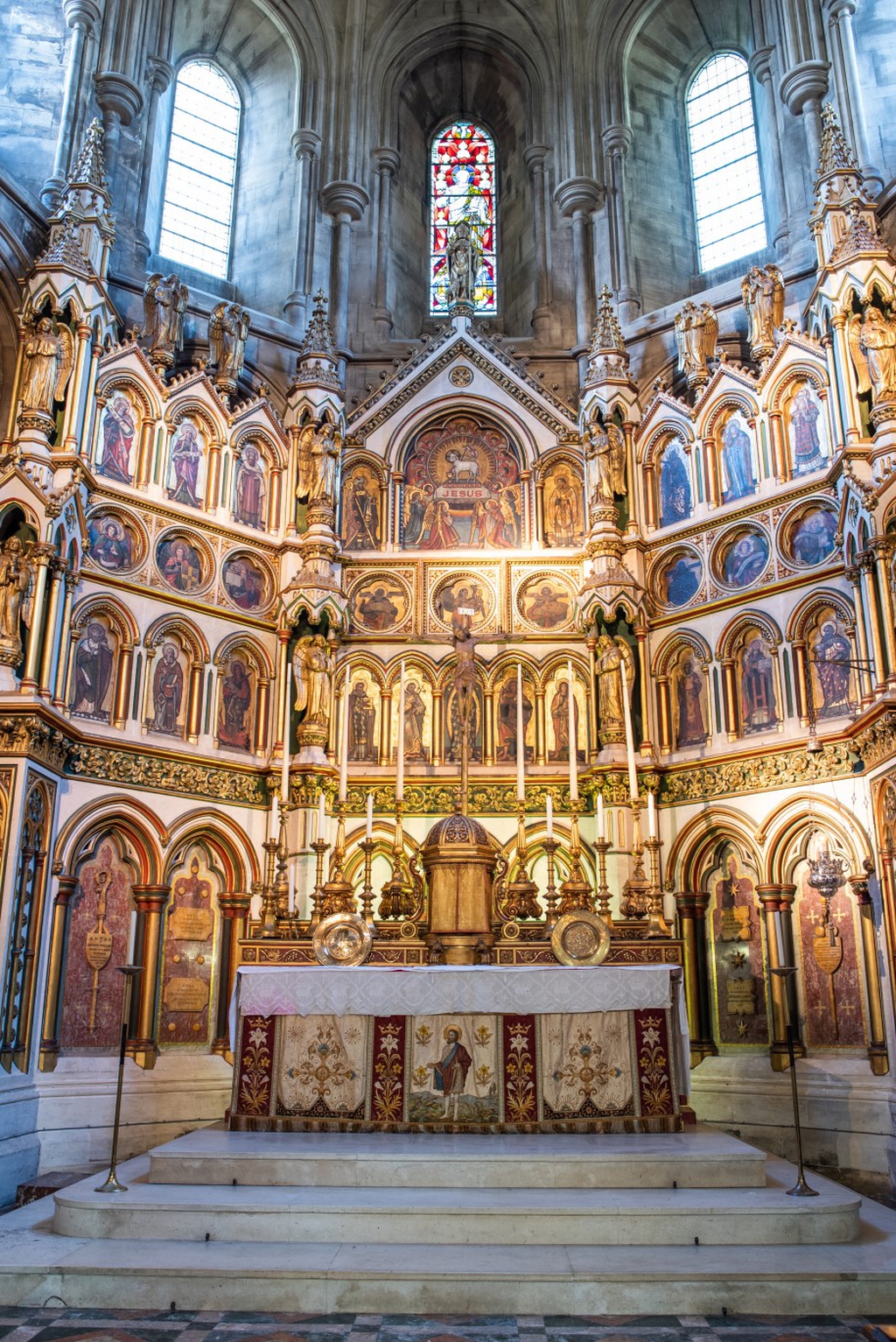 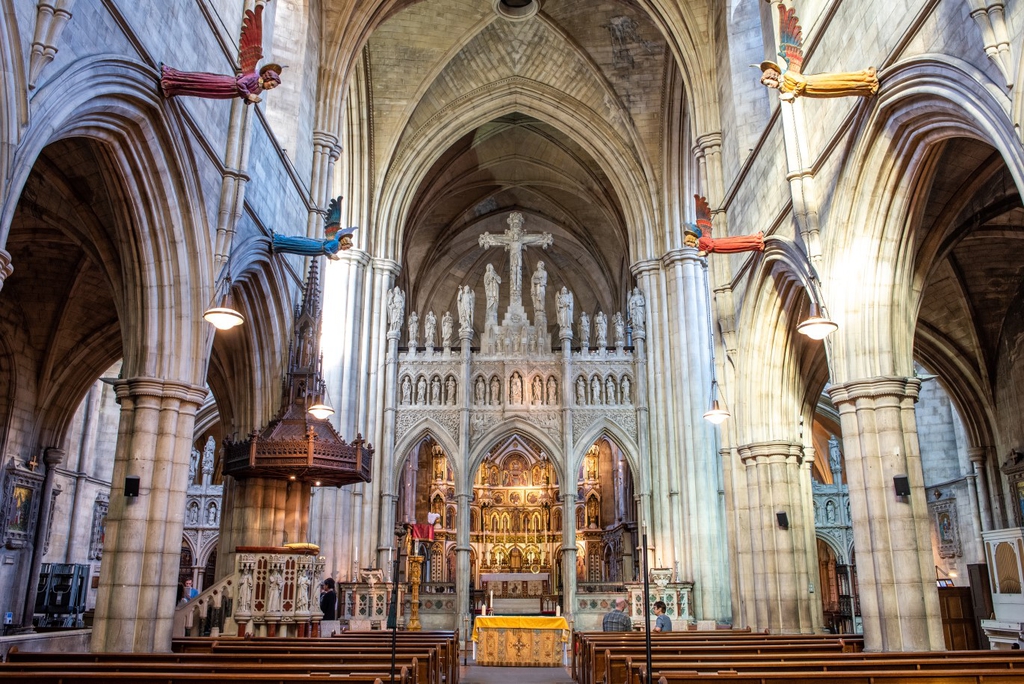 The Parish Church of
ST.JOHN THE BAPTIST
Holland Road W14

To most visitors the splendour of St John's will come as something of a surprise hemmed in, as it is by shabby stucco Victorian housing in traffic-choked Holland Road. For the architectural cognoscenti too St John's might also come as a revelation as it has long been considered an "other work' by James Brooks rather than one of his masterpieces which it surely deserves to be. The reason for this is simple. Brooks' reputation lay in his mastery of an ecclesiastical architecture of simplicity based on line, proportion and space rather than elaboration and decoration. Brooks did not necessarily need a big budget to achieve success and this is epitomised by the austere grandeur of his better known East End brick "cathedrals' such as St Columba's in the Kingsland Road of 1867-71.

Brooks' original conception at St John's owed much to the great English Cistercian abbeys of Yorkshire (more directly St John's is a scaled down version of Brooks' unsuccessful competition entry for Liverpool Cathedral). The interior space was to be uncluttered by screens, statuary, ironwork etc. with decoration being confined to simple architectural mouldings and the pale limestone interior well lit by the clear-glazed lancet windows. However the fund-raising capabilities of the congregation and a vision of a liturgical ceremonial somewhat more elaborate than that favoured by the Cistercians ensured that the original conception of simplicity never materialised.

The site of the church was purchased from the Holland Estate in 1868 with the intention of building a daughter church in the parish of St Barnabas, Addison Road. A stipulation of the purchase was that the church was to be of stone. Even in the C19th the cost of building a stone church was many times that of a comparable brick church and then, as now, the costs of building and running a church were entirely the responsibility of the congregation. Pending raising the necessary funds for a stone church a substantial wood-framed corrugated iron church was in use by 1872. The stone church was begun in the mid-1880s the chancel being completed by 1885. Construction continued westward for a further twenty-five years and ended with the completion of the west front in 1910. The uneven floor is a legacy of this incremental construction.

EXTERIOR It is a matter of regret that the exterior is so difficult to see but it is worth crossing the road to admire the flying buttresses and the west front. There were several schemes for the west front. The original intention was for a tower and spire but the ground proved too soft for this. Brooks died in 1901 and his associate J.S. Adkins completed the west front in 1910. The church was built of Acaster rag rubble with Bath stone copings. The interior is in dressed Bath stone.

NARTHEX  This was built to Adkins' designs in 1910 and incorporated Brooks' Devon marble font of 1892 paid for by the children of the parish.  The font now stands in the North Aisle where Brooks originally intended it to be placed. Very fine statues of the wise and foolish virgins carved by J.E. Taylerson in 1911 flank the impressive arch into the main body of the church.

NORTH AISLE Shrine of the Calvary. All the shrines in St John's are either of carved oak or teak (no cheap plaster!). This one is in oak and dates from c1920. The mosaic Stations of the Cross are by Adkins 1912-1915 and cost £50 each. The pews are of oak too the decorative roundels being turned by the church's scout troop in the 1930s. All the stained glass is of top quality much by Clayton & Bell (there is a Kempe window in the south aisle). As with all the imagery in the church the stained glass follows a carefully devised iconographic programme.

CHAPEL OF SS PETER & PAUL Altar by Brooks with teak figures. The altar rails are a quirky example of 1920s neo-medievalism. To the left is access to the vestries etc. (not open). Ahead is the:

CHAPEL OF THE BLESSED SACRAMENT 1912 by Adkins for the reservation of the Blessed Sacrament (now reserved on the high altar). The Aumbrey door depicting the risen Christ is mediaeval.

SANCTUARY Reredos of 1895 with painted panels representing the Heavenly Jerusalem of "all nations and kindred's and peoples and tongues standing before the lamb". This was rebuilt and enlarged with the flanking arcading by Adkins in 1902. The figure on the crucifix is C15th Spanish. Other fittings include: marble pavement 1902, altar rails 1897, high altar 1895 and the Bishop's throne by Adkins of 1916.

CHANCEL the vicar's daughter, Miss Spencer, carved the very fine choir stalls. On display is the best processional cross in gilt brass of 1893. It is set with 176 semi-precious stones almost all of which were given by members of the congregation. Like most of the church's fine metalwork, such as the screens, it was made by Hart, Son & Peard of London and cost £68.

LADY CHAPEL Reredos by Adkins 1907. The female personification of the Church to the right holds a model of St John's under her arm. A Mr Clarke who was responsible for the pulpit figures too carved this. The altar of 1905 contains a neo-mediaeval tableau by Grosse and Sons. The subject matter is the history of the Church: pre-Incarnation to the left and post to the right. The present day church is represented by the bishop on the extreme right modelled on the then Bishop of London.

ORGAN. A remarkable instrument by August Gern 1897 which was enlarged in 1928 by Henry Willis III.

TRANSEPTS The vaulting in the crossing was originally to be a complex hexagonal lantern surmounted by a flí¨che on the roof. The church has an ambo for both the Gospel and the Epistle; an arrangement based on early Christian exemplars in Italy. The paschal candlestick is particularly fine in golden marble with onyx banding and inlaid crosses of Egyptian porphyry  Adkins 1910. The pulpit was built in 1902 to the designs of Brooks after his death with the canopy being added in 1912 to the designs of Adkins. The stone screens built across the north and south aisles and chancel form a single iconographic programme illustrating "the spread of the Catholic Church throughout the World' and were constructed between 1894 and 1900, sculpture in Corsham stone by J.E. Taylerson. The rose window in the west end is by Percy Bacon & Bros and depicts the Virgin Mary with the Christ child surrounded by Biblical figures. It was paid for by a single benefaction. A window of this size and quality would cost of the order of a quarter of a million pounds today.