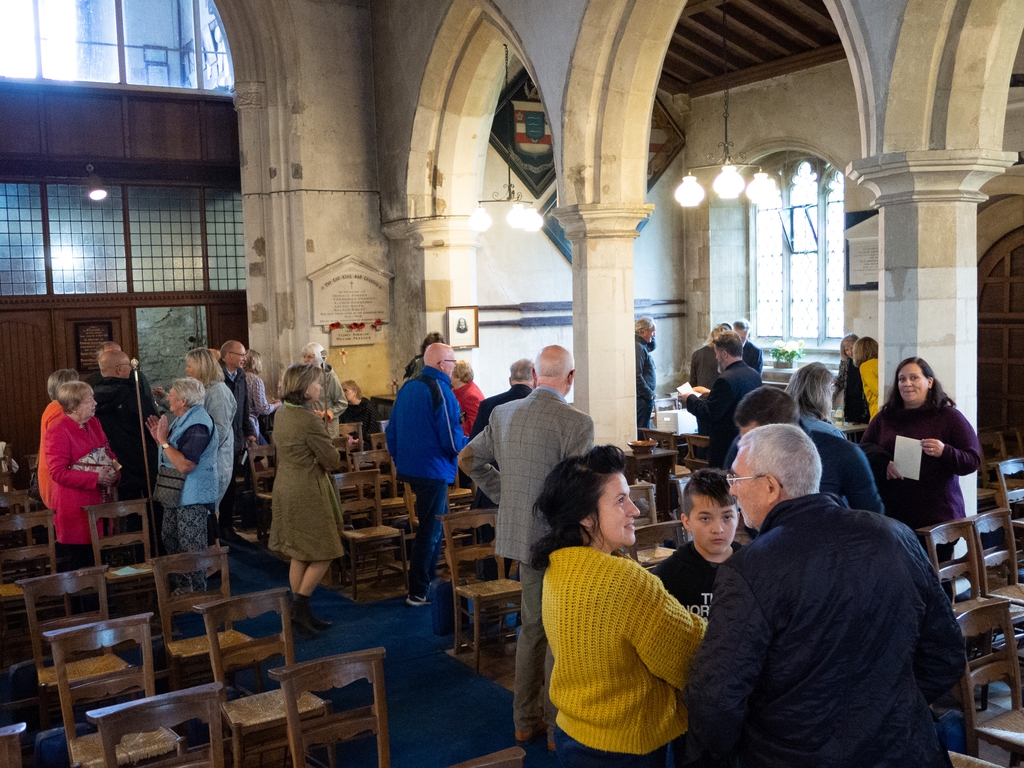 The parish church of ST. JAMES  consists of a chancel 29 ft. 4 in. by 18½ ft., a nave 34 ft. by 19 ft. 4 in., north aisle 10½ ft. wide, south aisle 9½ ft. wide, south porch, and west tower 12½ ft. by 14 ft. The south arcade of the nave is 13th-century work, and the aisle walls are perhaps of this date or rebuilt c. 1330; the chancel seems to be 14th-century work, though much altered; the north arcade and aisle seem entirely of the 15th century, as does the tower, and the south porch may be c. 1500. There are traces of a wooden north porch. The materials of the church are, in the tower and north aisle and in parts of the chancel, a dark brown stone mixed with a peculiar deep green stone, making a very effective and unusual combination. The south aisle is built of small thin stones. The exterior of the church has been mended up in Roman cement, which still covers most of the stonework details. The chancel walls have been thrust out of the perpendicular by the roof, which is of fairly steep pitch and covered with modern slates. The east window has a square head and three cinquefoiled lights of 15th-century work fitted to the jambs of a 14th-century window which had a pointed head, and near it on the south side is a two-light window with divisions of repaired tracery. At the south-west is a square-headed 15th-century window of two cinquefoiled lights, to the east of which is a blocked doorway, and opposite is an uncusped two-light window, probably of the 17th century. The piscina has a pointed trefoiled head, and east of it is a plain square recess. In the north-east corner of the chancel, against a blocked window, is an alabaster tomb with effigies of John Thompson and his wife Dorothy; he was an auditor of the Exchequer. The west wall of the chancel was probably destroyed when the rood loft was fitted up, and there is now a modern arch. The nave has a north arcade of three 16th-century bays with octagonal piers and responds with moulded capitals; to the east is a corbel which once supported the rood loft, and on one of the columns is a small bracket. The south arcade is of three bays with octagonal shafts and moulded capitals, which are perhaps not original, and to the east are the blocked doorways of the rood loft. The tower arch is in three orders, the inner resting on half-octagonal shafts with foliate capitals. The roof is flat, and has a plaster cornice cutting across the crown of the tower arch. The north aisle has an east window of three cinquefoiled lights and two three-light north windows, between which is a blocked doorway with the marks of a porch; at the west end is a squareheaded window of three cinquefoiled lights. In the east wall of the south aisle is a niche with 14th-century foliage in the spandrels, and near it in the south wall is a trefoiled piscina. There are two 16th-century windows of three cinquefoiled lights, and between them a moulded 14th-century doorway with an external holy water stone in its east jamb. The porch is large and lit on each side by a squareheaded 16th-century window of two cinquefoiled lights; the doorway is in two hollow-chamfered orders with a four-centred head. The tower is in three stages, with an embattled parapet, moulded plinth, and south-east stair turret, the angles being strengthened by diagonal buttresses in four stages. The west doorway has a square head with an inner order forming a four-centred arch, and the label has a carved figure stop on the north side, that on the south having disappeared. The window above it has three cinquefoiled lights and perpendicular tracery; the top story is lighted on all sides by twin windows of two trefoiled lights. Besides the monument already described there is a small mural tablet on the east wall of the south aisle to Robert Slingsby, who died 1634, and his wife Abija, and in the chancel are several of the 18th century to the Williamson family. In the tower is an old chest with a rounded top bound all over with iron, and having three locks and three hasps for padlocks; the south door is also old and probably of the 16th century. One part of the rood screen remains and is used in the reading desk. The font is a plain cylinder of stone set against one of the pillars of the south arcade; it is ancient, but there is nothing to fix its date.