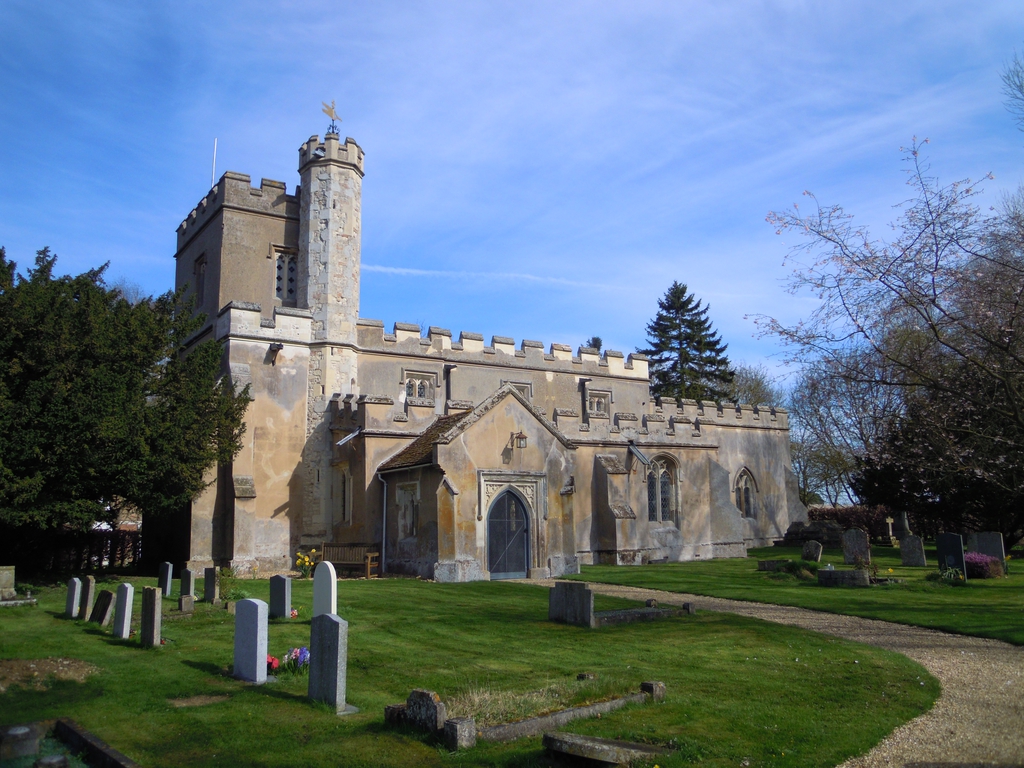 There has probably been a parish church at Newnham for over 1,000.  The earliest parts of the present north wall are thought to date from the 12th century, the chancel from the 13th, the tower and south aisle from the 14th and the clerestory windows and south porch from the 15th century.

The church, which is dedicated to St Vincent, serves a small village community of some 100 people. Since 1998 we have been part of the United Benefice of Ashwell, Hinxworth and Newnham – the Benefice includes the two redundant churches at the hamlets of St George, Edworth and St Mary Magdalene, Caldecote.

On the north wall of the nave fragments can be seen of medieval wall-paintings dating from the 14th and 15th centuries (some may be as early as the 13th century).  The best preserved of these shows the lower half of St Christopher - his feet, the base of his staff, cliffs and some lively looking fish in a turbulent stream.  Unfortunately, the upper half of the Saint with the infant Christ on his shoulders was unwittingly destroyed during the reconstruction of the nave roof in Victorian times. Other intriguing fragments await conservation; a mysterious circle with figures of strange beasts, and a human figure on the window edge close to the pulpit.  In fact there are traces of early colour beneath the limewash in many areas of the interior.

The use of Clunch, the soft local limestone, in the construction of the main walls has resulted in a variety of incised graffiti. These are noticeable particularly around the main entrance door and in the south porch, though many are now faded beyond legibility, as the stone weathers slowly away. Most interesting are the votive crosses, scratched by pilgrims and other travelers seeking the protection of St Vincent on their journeys, which can still be seen on the outside of the door arch. Other examples - a fish and a windmill - can be seen around the doorway to the belfry turret.

In the chancel there are two fine 15th century brasses and some handsomely lettered memorials of the 17th and 18th centuries on the walls and floor.  The 15th century font is also worthy of note.

There is only one bell in the tower, though there are “pits” for four. It has a seemingly meaningless inscription, but belongs to a group of three, the other two being in churches at Clothall and Norton, which are located in the immediate neighbourhood, and all are thought to be the work of the same hand. They probably date from the end of the sixteenth century. Rumour has it that three of the original bells may have been sold at some time in the distant past.

The somewhat dreary appearance of the badly weathered “Roman” cement render - part of the 19th century 'improvements' - belies the tranquil simplicity of the interior.  This cladding, which tends to encourage dampness by restricting the ability of the walls to breathe, is in the process of gradual removal as and when funds allow.  The most recent work can be seen on the east face of the tower and on the stair turret, where the stonework has, in recent years, been restored to its original glory.