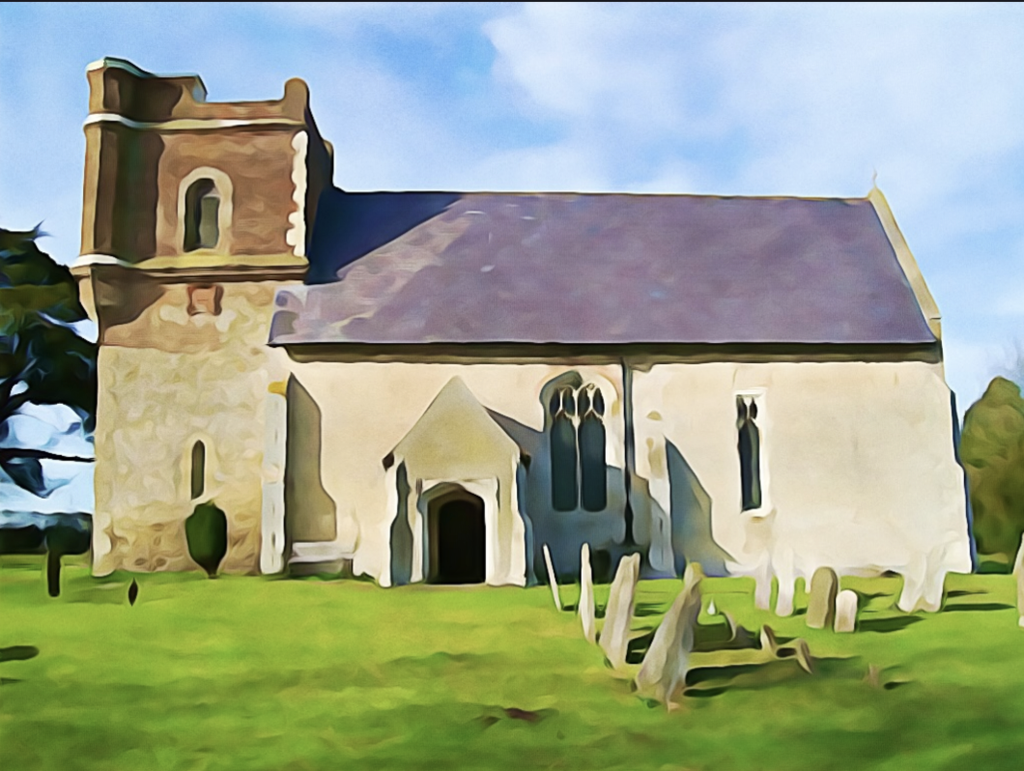 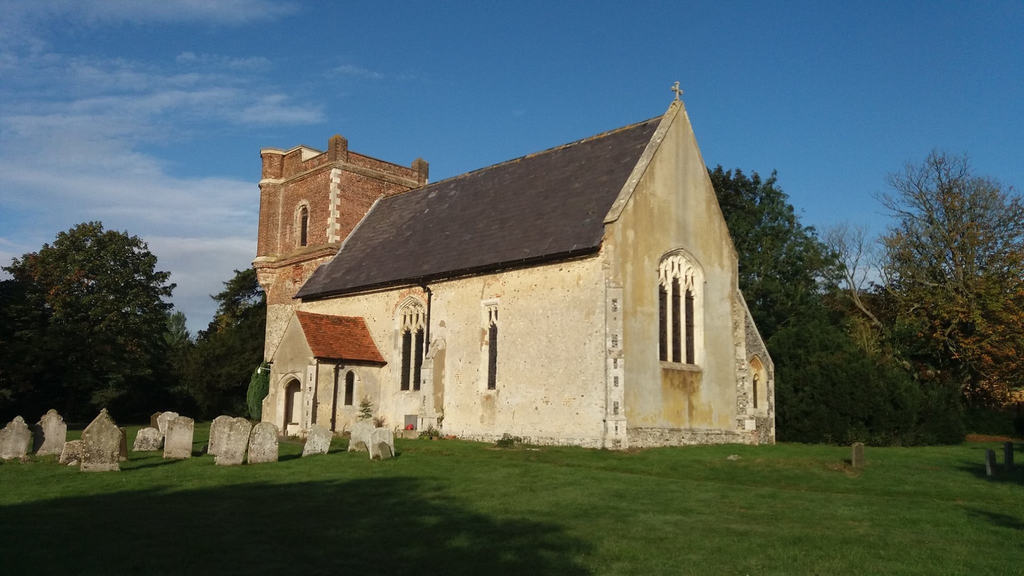 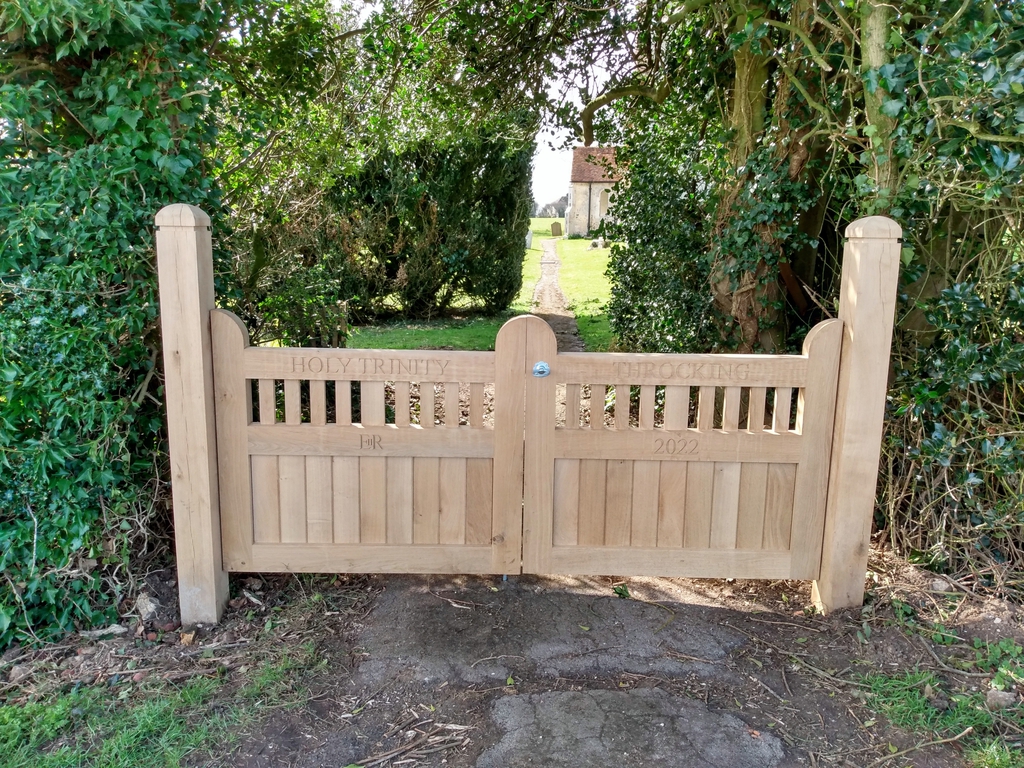 The tiny parish church of Throcking has a long history. People have worshipped here for at least 800 years, and our first known Rector was Richard de Cruce Roheis in 1216. Constructed mostly of local flint and cement, the building dates from Saxon times with the oldest part being the lowest section of the tower. This section dates back to the early 1200s, and still has its original Gothic lancet windows set in its four feet thick walls. In the early 1400s the chancel and nave were added, and the porch was added a few years later. During Victorian times the roof covering was lead, but after it was stolen twice the lead was replaced with slate in 1836 - lead theft from church roofs is apparently not only a modern problem!

Legend has it that Cromwell's army used Throcking's church tower for target practice during the English Civil War. There was a massive amount of damage, and you can still see marks where it was shelled. The top half of the tower was rebuilt in red brick, although not to its original height, which is why it looks rather squat and top-heavy and jars somewhat with the original 13th Century flint. The rebuilding work is commemorated with an ornate brick panel on the outer south wall of the tower that bears the date 1660. It was paid for by Sir Thomas Soame, who was patron and Lord of Throcking Manor at the time, and is buried along with his wife in a vault beneath the nave. Thomas was an MP who became Sheriff of London in 1635, and was imprisoned in the Tower of London in May 1640 for refusing to name those in his ward who could afford to contribute £50 or more to a loan for King Charles.

A key feature of our little church are the magnificent marble monuments, two of which were created by the most fashionable sculptors of their day, and scholars have visited us from around the world especially to study them. The monument on the south wall was carved in 1753 by the Flemish artist Michael Rysbrack,  one of the two most distinguished sculptors working in England in the mid 1700s. It is dedicated to Robert Elwes and his wife Martha, whose father was one of the governors of the Bank of England. The monument on the north wall is dedicated to Mrs Hester Elwes - Robert Elwes' daughter in law. It was sculpted by Rysbrack's great rival, the English sculptor Joseph Nollekens RA, who is generally considered to be the finest British sculptor of the late 18th century.

Around the walls are twelve painted crosses, known as stations of the cross, which mark the places which the bishop touched with holy oil when the newly extended church was consecrated over 500 years ago. Only one of the original three bells remains in the tower. It was cast in 1855 and is no longer rung. The font was made in the 15th century of clunch, a local stone, and has a octagonal panelled bowl and stem. The heavy oak pews and choir-stalls were added in the 17th century. They are somewhat narrow for todays more ample behinds, and rather uncomfortable to sit in for any length of time! One of the chancel pews has an interesting carving of three acrobats, with one figure supporting another upside down on their head and swinging the third by the leg!

Many of todays internal church fittings were the gift of the Rev William Adams. When he became Rector in 1841, he found the church in a deplorable state, with a leaking roof and the font lying in pieces. Adams was Rector here for 37 years, and he was a great benefactor. He reroofed the church at his own expense, and repaired the pews, and when he died in 1878 he left £500 expressly to "beautify and repair" the church. This money paid for the vestry to be added, as well as the tinted glass in the nave windows, the pulpit, the lectern, and even the organ. Friends of the late Rector installed the stained glass east window in his memory, and also contributed to the stone reredos.

Our parish registers date back to 1558, and you can research the registers dating from 1612 at the Hertfordshire Record Office. Another fascinating fact is that our church’s net income in 1848 was £252, which equates to almost £63,000 in today’s money (these days we are lucky to net 1/63rd of that sum in any one year!). Eventually Throcking could no longer afford its own rector, and the parish was amalgamated with Cottered in 1932.