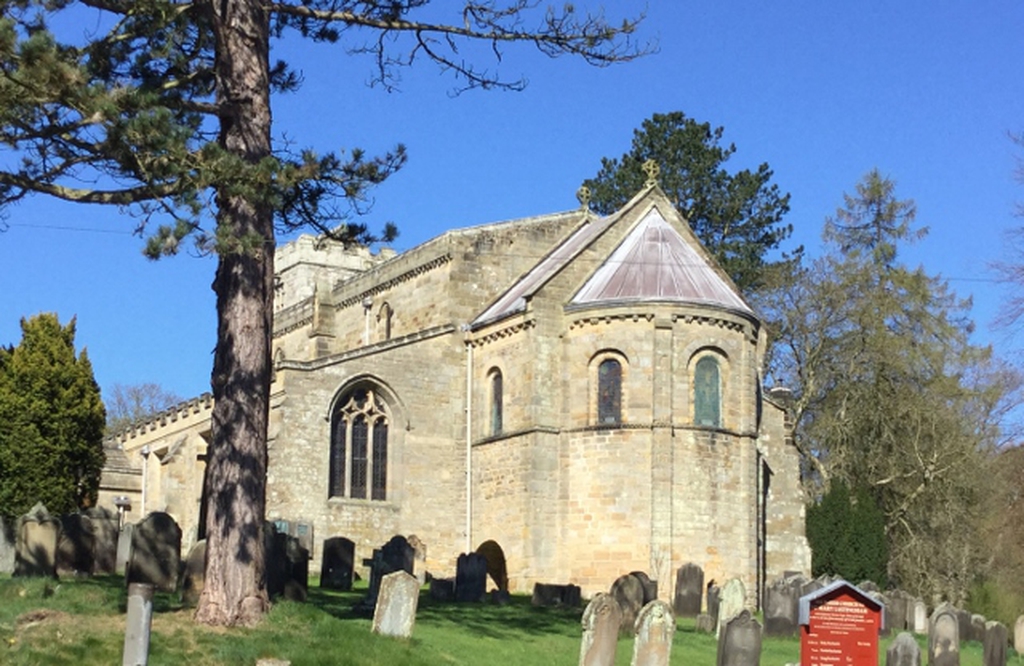 Open during the day, every day of the year.

ST MARY LASTINGHAM was founded c.654 as a Celtic monastery by St Cedd of Lindisfarne, a place of prayer and hospitality - which it still is.

Lastingham has been a centre of Worship and devotion since the 7th Century. As we welcome you to this ancient and beautiful church, we hope that you will share with us the joyous sense of peace and enjoy the heritage of centauries of Christianity in this church where, in the words of the hymn: "Brothers we are treading where the saints have trod".

Most of the early history of the church comes to us from the Venerable Bede who, in A.D. 731, completed his history of the English Church and People, when he was a monk at the monastery in Jarrow.

The Story of Ct. Cedd and St. Chad founding the Monastery in Lastingham.

"During his episcopate among the east Saxons, God's Servant Cedd often visited his own province of Northumbria to preach. Ethelwald, son of king Oswald, who ruled the province of Deira, Knowing Cedd to be a wise, holy and honourable man, asked him to accept a grant of Land to found a monastery, to which hr himself might often come to pray and hear the word of Go, and where he might be buried: for he firmly believed that the daily prayers of those who would serve God there would be great help to him. The Kings previous chaplain had been Cedd's brother, a priest named Caelin, a man equally devoted to God, who had ministered the word and sacraments to himself and his family, and it was thought of him that the King came to know and love the bishop. In accordance with the King's wishes, Cedd Chose a site for the monastery among some High and remote hills, which seemed more suitable for the dens of robbers and haunts of wild beasts than for human habitation. His purpose in this was to fulfil the prophecy of Isaiah: "in the haunts where dragons once dwelt shall be pasture, with reeds and rushes", and he wished the fruits of good works to spring up where formerly lived only wild beasts, or men who lived like beasts.

The Man of God wished first of all to purify the site of the monastery from the taint of earlier crimes by prayer and fasting, and make it acceptable to God before laying the foundations. He therefore asked the King's permission to remain there throughout the approaching season of Lent, and during this time he fasted until evening every day except Sunday according to custom. Even then he took no food but a morsel of bread, an egg and a little watered milk. he explained that it was the custom of those who had trained him in the rule of regular discipline to dedicate the site of any monastery to God with prayer and fasting. But then days before the end of Lent a messenger arrived to summon him to the King, so that the king's business should not interrupt the work of dedication, Cedd asked his brother Cynebil to complete this holy task. The latter readily consented, and when the period of prayer and fasting came to an end, he built the monastery now called Lastingham, and established there the observances of the usage of Lindisfarne where he had been trained.

When Cedd had been bishop of the province and administered the affairs of the monastery for many years through his chosen representatives, he happened to visit the monastery at the time of plague, and there he fell sick and died. He was first buried in the open, but in the course of time a stone church was built, dedicated to the blessed mother of God, and it is said that his body was re-interred in it on the right side of the altar, although this has never been proven.

The bishop bequeathed the abbacy of the monastery to his brother Chad, who subsequently became a bishop. The four brothers I have mentioned - Cedd, Cynebil, Caelin and Chad - all became famous priests of our Lord, and two became bishops, which is a rare occurrence in one family. When the brethren of Cedd's monastery in the province of the East Saxons heard that their founder had died in the province of Northumbria, about thirty of them came wishing, God willing, either to live near the body of their Father, or to die and be laid to rest at his side. They were welcomed by their brothers and fellow-soldiers of Christ, and all of them died there of the plague with the exception of one little boy who was preserved from death by the prayers of his father Chad.

We welcome all visitors to our church and can organise services along with some historical information about the building.