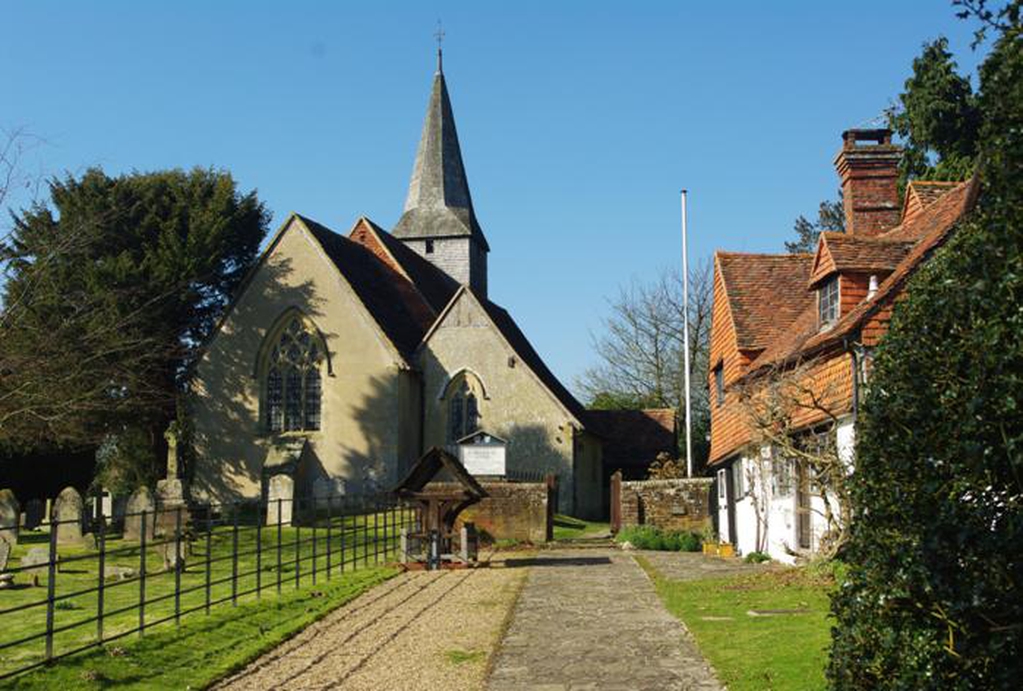 The construction of the first Norman church, consisting of nave and chancel, took place in approximately 1100. Our beautiful font dates back to around this time, probably about 1080, and is one of the finest and best preserved in Surrey. It is marked with a Maltese Cross on a long stem, defining it as unmistakably Norman.

The south aisle of the church was added in 1200 by the piercing of the walls and the insertion of the rounded Norman pillars.

The north aisle was then originally added about 1280.

The outline of the east window dates back to 1320, although the glasswork, imported from Normandy was constructed in 1850.

The pews are mostly of 14th and 15th century origin. The rood screen is 19th century, but it probably incorporates wood from the 15th century screen, which can still be found supporting one of the ancient churchyard yew trees believed to be over 2000 years old!

Outside the church stand the village stocks, one of only two complete sets of stocks in Surrey. Any boy who dared laugh in church was confined in these stocks, given a thrashing, and left to meditate on his sins until the next service of the day. As the current vicar, I'd like to say that we still practise this same discipline, but alas we do not - some of our All Age services now would've caused quite an uproar back then!

From the outside the timber bell-tower is also noticeable, standing on large oak posts worked into a series of hollow mouldings. The framework of the bell-chamber and spire is an elegant display of mediaeval carpentry dating from around 1500. Watching the bell ringers 'in church' at the western end of the nave provides quite a unique atmosphere.

Within the ancient graveyard there are grave markers dating from 1658. Although this graveyard is now closed for further burials, a more recent 'open' cemetery can be found just a short walk down Rosemary Lane.

Opposite the church can be found 'Alfold Church Room', the middle of a beautiful row of terracotta tiled terrace cottages. The Alfold Church Room houses our church office, choir vestry and church hall, which is used for children's groups, and can be hired out for non-church activities.

It's also worth mentioning our beautiful Jacobean pulpit and sounding box. Merely looking at it one gets a sense of pride in its workmanship and carving.

If visiting St Nicholas church building please do take one of our little booklets 'A History of Alfold Church', where you'll find a much more detailed history of the church.