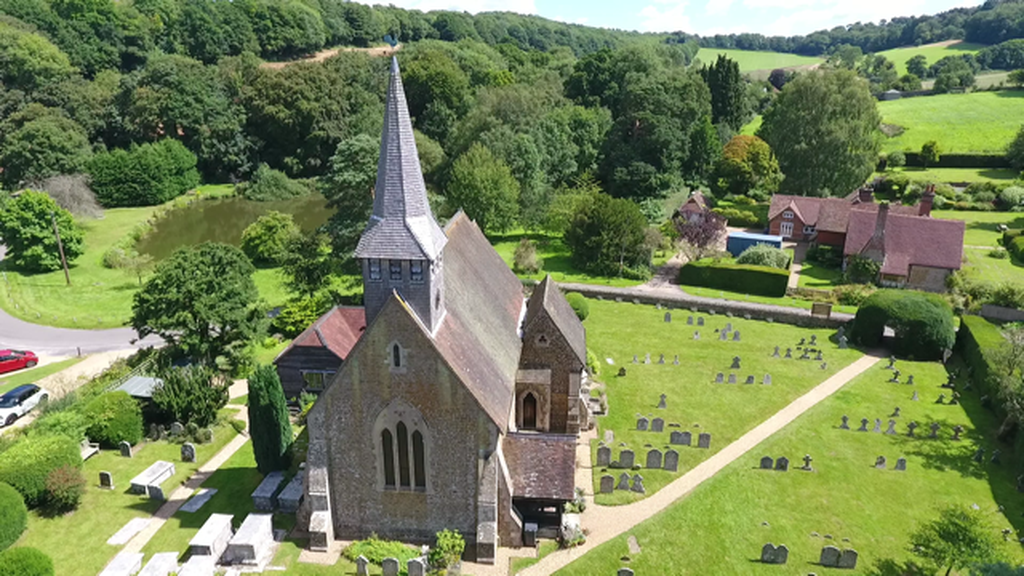 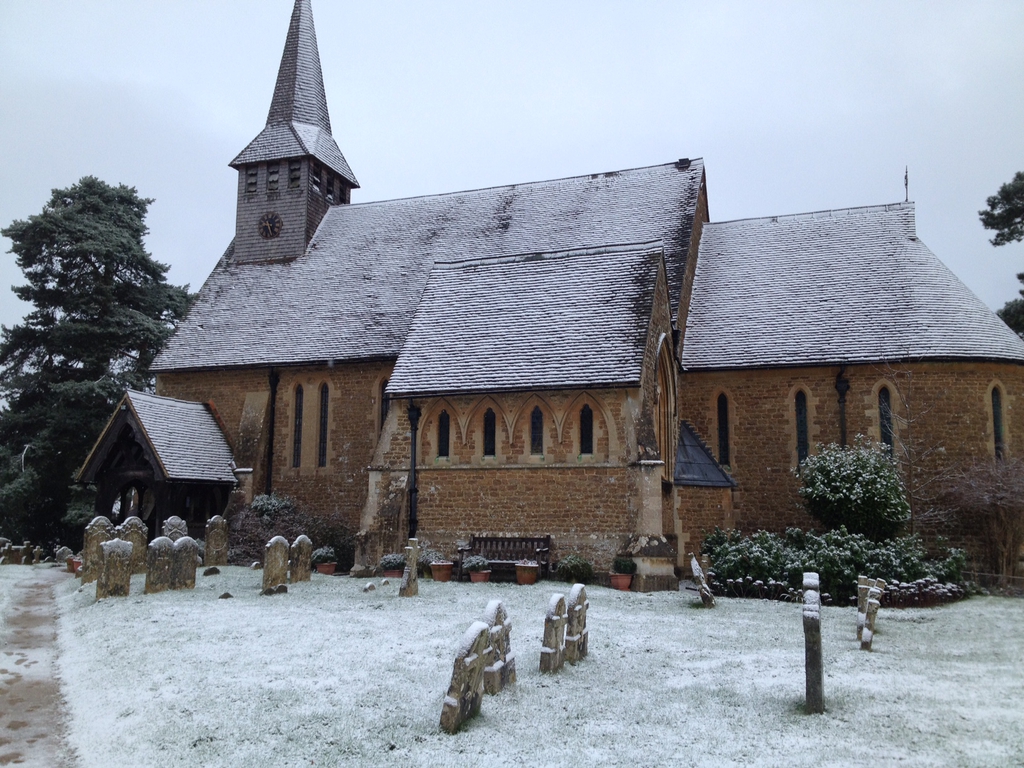 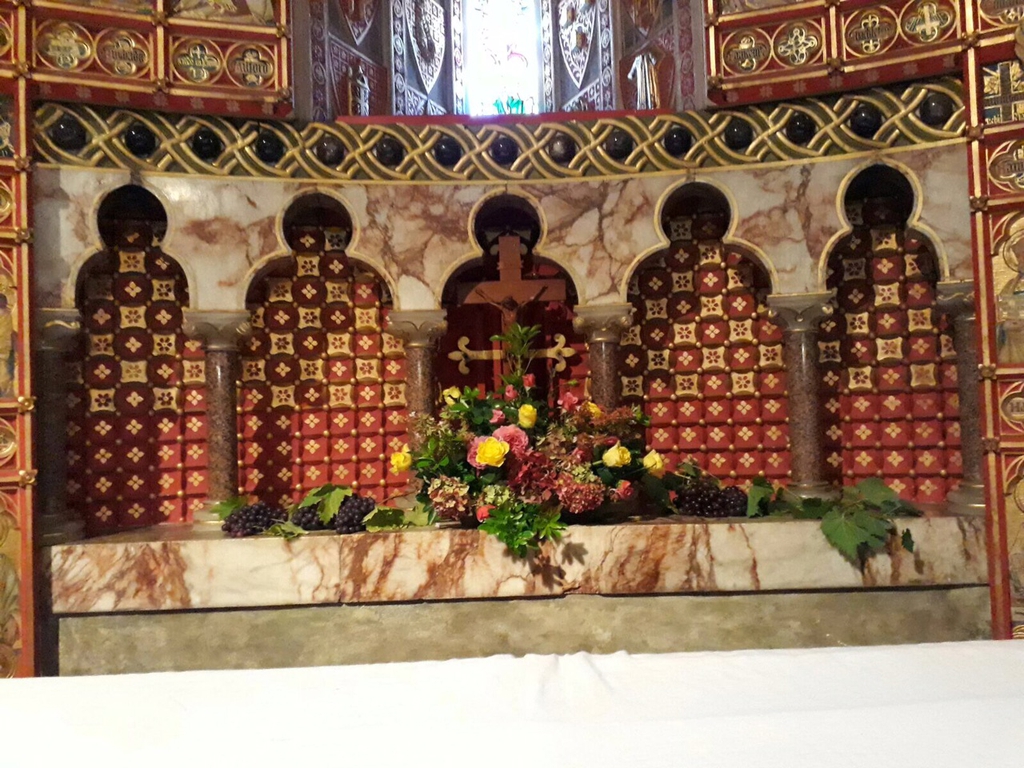 Sir John Betjeman, in his Guide to English Parish Churches, called it ‘a Tractarian Work of Art’. The authors of the Surrey volume in the Penguin ‘Buildings of England’ series wrote that it was ‘worth a very special look to see how good and how free from period associations a Victorian country church could be when the architect took pains over it’.

Formerly, Hascombe was in the Diocese of Winchester. The records of the See and of the Cathedral of Winchester were destroyed in the 16th Century, so that the early history of the Church is difficult to trace. It is believed that the old church was built around A.D. 1220; the first official mention occurs in a list of churches in the Deanery of Guildford, circa 1283, where it is described as ‘Ecclesia de Escumbe’. ‘John’, the first known Rector of Hascombe, died in 1316.

The church was built by Woodyer in the general style of the late 13th Century. It is of Bargate stone, quarried within the parish, with a shingled bellcote. The plan is simple; nave, chancel (or apse) and separately-roofed lady chapel. This simple plan sets off to best advantage the rich and intricate decoration on windows, walls and roof, the gilding and dark colours being further enhanced by the modern lighting.

Much of the oak timber in the present porch came from the old porch. The massive mid-Victorian lock on the door was made to fit the ancient key with which the Rectors of Hascombe have, for centuries, been inducted.

As you enter the Church, you see to your left the spiral staircase leading to the belfry which houses a peal of five bells. These bells are exceptionally light and have an excellent tone. They are rung mainy for weddings and the treble chimed each sunday. To your right is the font of Purbeck marble, given by a Rector of Hascombe in 1690. At the back of the nave is an interesting 18th Century stone tablet in memory of William Diddle fold.

The stained glass windows by Hardman Powell commemorate events in the life of our Patron Saint — St. Peter. Around the walls are the ‘one hundred and fifty and three’ fishes of the post-Resurrection miracle all caught in a net which is being dragged in by the 6 disciples — shown on the east wall — whilst St. Peter ‘girt in his fisher’s garment’ is seen casting himself into the sea (St. John 21).

The pulpit’s panels show our Lord and the two greatest preachers in scripture — Noah and St. John the Baptist — with St. Peter standing between them.

The east window of the Lady Chapel by Clayton and Bell, and the lancet window by Hardman Powell, commemorate members of the Godman family of Park Hatch, whose family pew this originally was. The conversion into a lady chapel, in memory of Joseph Godman, took place in 1936.

The beautiful oak screen is about 500 years old; it was restored and painted in 1864.

The stained glass windows, the splays giving into them and the spandrils above them portray biblical scenes involving angels. In the windows and splays they are scenes in the life of our Lord. The lovely central window shows our Lord on the cross with St. Mary and St. John standing by. In the spandrils, the episodes start on the north side with the expulsion of Adam and Eve from the Garden of Eden and continue with Old Testament stories until the last small spandril on the south side showing the Archangel Gabriel appearing to Zaccharias — the end of the Old Covenant and the beginning of the New.

The subject of the reredos comes from the Book of the Revelation — the Adoration of the Lamb. To connect Hascombe with the nineteen churches of the then Rural Deanery are the patron saints of their churches, who frame the reredos as in a picture.

The roof rafters are cusped and gilded to provide a continuous interplay of highlights.

The Victorian 2 Manual Organ, made by Messrs. Brindley of Sheffield, was installed in 1869.