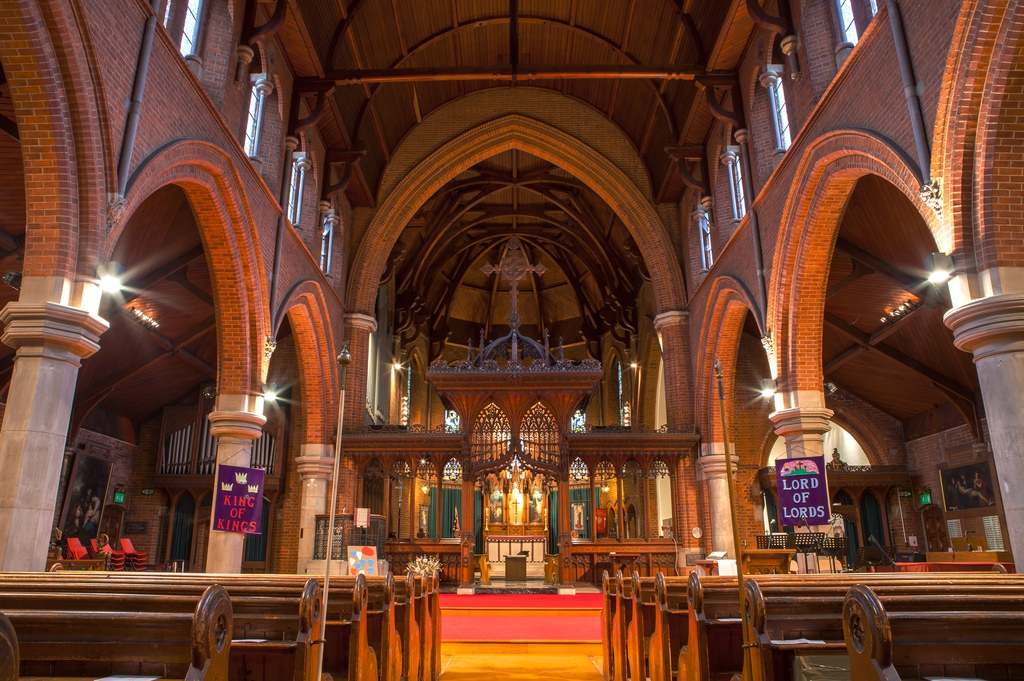 A History of Christ Church

An Iron Church was set up on land near the present Christ Church. The rector of St. Nicholas Rev. JA Giles, was licensed on the 31st March 1876, by the Bishop of Winchester, whose Diocese Sutton was in, to take services, the Rev. HW Turner became Curate-in-Charge.

In 1886 on the death of Mr. Giles, Mr. Turner was appointed Rector of St. Nicholas and the starting of a long career of James Courtney-Gale, which was to last over fifty years at Christ Church. In 1887 land was found among the lavender fields,to the east of the Brighton Road to build Christ Church. At this time Mr Gales' stipend was £400 per year.

The Architects were Messrs. Newman and Jacques, the builders Messrs. Gregory and Company of Clapham. The building would cost about £8000, without heating, Alter, Organ, or other furnishings. The Gales and their five children lived firstly near the Brighton Road and then at 3, Egmont Road, until the Vicarage had been built.

Rev.James Courtney-Gale had a long Ministry at Christ Church, he died in the Vicarage on 9th November 1937 aged 80. The next Incumbent was Crauford Murray, he was ordained in 1909. After the war Crauford was able to extend his visiting by a gift of a car from the Parish, he also became Rural Dean of Sutton. Crauford Murray was robed ready to take a funeral service on 29th October, 1955, the Verger came to the Vestry to get him and found him dead on the floor.

The next interregnum was very short. The Institution and Induction of the Rev. Frank Stanley Lewis MA, by Dr. Bertram Simpson, Bishop of Southwark, took place on 16th April 1956. At this time there were over 900 names on the Electoral Roll. Frank's outstanding feature was to regularly visit every member of the congregation. Frank Lewis retired in 1974 to Pershore.

The Rev. John Hackett MA was Instituted as Vicar at Christ Church on Tuesday 26th November 1974, by the Bishop of Southwark. John was ordained Priest in 1963. on July 19th 1975 John married Joy Hater. On Whit Sunday 1980 the B.B.C. programme Songs of Praise came from Christ Church, transmission was on 25th May to an audience of 5,000,000. John Hackett left Christ Church and was Inducted as Rector of Holy Trinity Clapham on 19th September 1985. Sadly John died a few years later from heart problems.

Alan Mathers was Inducted as Vicar at Christ Church by the Bishop of Croydon on the 22nd February 1986. Alan, his wife Muriel and their son Richard soon settled down in the Vicarage. The Church celebrated its Centenary on the 18th May 1988. Alan continued as Vicar at the Church until 1995, when he moved to the South of France to take up Ministry at the Holt Trinity Church in Cannes.

In September 1996 the Rev. Colin Gale was Inducted as Vicar of Christ Church by the Bishop of Croydon, Bishop Wilfred. The original Vicarage was sold, and the money used to build another one on the opposite side of the grounds.

Colin left in 2004 to become Vicar of Burstow and Horne. In 2006 the Sutton Team Ministry was created providing ministerial oversight to Christ Church, St Nicholas Church and St Barnabas Church in Sutton town centre.  Rev Dame Sarah Mullally was appointed Team Rector and she was soon joined by Rev P. Mark Pullinger as Team Vicar. Together they developed the Team Ministry and helped each of the three churches discover exciting ways of sharing together in worship and teaching whilst still maintaining their own unique characteristics and styles. Sarah left the team in 2012 when she was appointed Canon at Salisbury Cathedral. She has since been appointed Bishop of London. Mark moved on in 2015 to become Team Vicar at Merstham and Gatton Team Ministry. Rev Justine Middlemiss joined the team in 2013 as Team Rector. She was joined by Rev Phil Brooks in 2016. Justine moved to a new parish Kenley in 2018. Rev Phil Brooks continues to lead Christ Church into a new way of working as Christ Church, St Nicholas and St Barnabas work together as a group of churches in Sutton rather than a formal team.

If further information is required on the history of the Church, pleas contact us in writing, by telephone, or email. All old registers, minute books, and archival material are kept at Sutton Library.