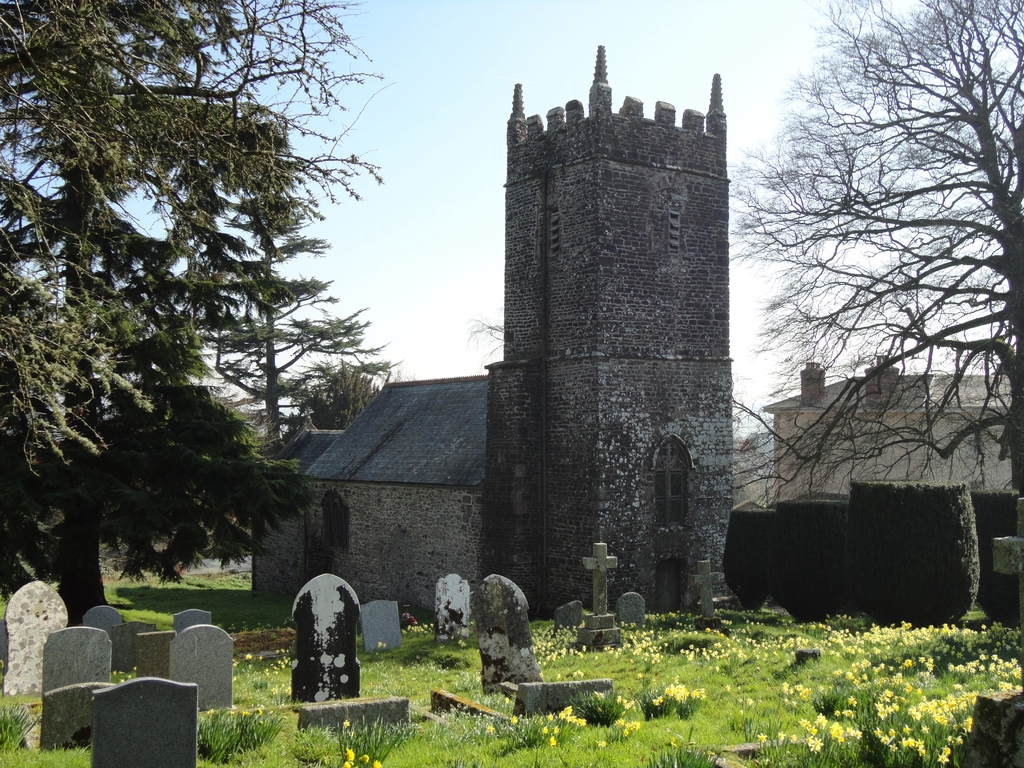 The village of Stockleigh English is mentioned way back in time. In 1086, in the Doomsday Book, an entry tells us that the village was known as STOCHELIE or ESTOCHELEIA. The under tenant was Reginald who held the land from Robert, Count of Mortain.

Robert, Count of Mortain was the half-brother of King William I and the younger brother of Odo of Bayeux. He married Earl Hugh of Chester's daughter. Robert was Lord of the Sussex rape of Pevensey and had a castle there. He was the virtual Earl of Cornwall where he was lord of many more manors than the king himself. His fief included Honour of Berkhampsted and included a castle there. Robert rebelled in 1088 and eventually received a pardon. He died in the year 1091. He was the largest landowner in the country after the king with holdings in nineteen counties. The family were dispossessed of all their lands in 1104 after a rebellion.

The church, which is Early Decorated, of dates 1300 - 1370, consists of a 14th century Nave and Chancel, and a tower dating from the late 15th century. The church was restored and much beautified between 1878 and 1883 chiefly through the exertions of the energetic incumbent, the Revd. George Dowty. The church roof was replaced in the early 20th century. The walls are of stone rubble, mostly mudstone with some volcanic trap. There are volcanic ashlar dressings and detail. The roof is of slate with crested ridge tiles. In 1896 a very fine lychgate was completed by Miss M A Bellow in memory of her mother.

The church is built in the perpendicular style. The tower is unbuttressed of two stages with chamfered volcanic plinth, plain dripmould and embattled parapet with crocketted pinnacles on each corner. Large two-light belfry windows are now partly blocked and there is a cinquefoil-headed window to the ringing floor on the south side. On the west of the tower a flat-arched volcanic doorway with chamfered surround has a relief cross in the keystone of the arch above. The window above the door is of perpendicular design. The stair turret projects from the north side of the tower.

The church porch was added in the 19th century and is gabled with a narrow two-centred outer arch. It has a wagon roof. The church door is a restored 15th century studded door with, on the inside, the original wrought iron strap hinge at the top and the original oak lock.

The altar is constructed of Nottingham Alabaster with a beautifully carved reredos in a similar gothic style behind. They bear the date 1885. The altar has an elaborately carved frontal, with paintings on the wooden panel compartments of the frontal after Fra Angelico. The altar rails, stalls, lectern pulpit (dated 1884) and the tower screen are all of the late 19th century and in the gothic style. The pews are contemporary apparently made from sections of 18th century pews. The font is probably medieval, made of granite, with a hollow-chamfered plinth, circular stem and octagonal bowl. Over the south door is a royal coat of arms which had been badly damaged by fire. Major restoration on it was completed in July 2001 revealing all its former glory. It is dated 1775 and inscribed George III R. After the earlier breakaway from Rome by Henry VIII people were encouraged to worship the king and many churches had coats of arms displayed.

The north side of the nave includes a group of marble mural memorials to the Bellew family of nearby Stockleigh Court, notably the William Bellew memorial of 1789. Others are to the memory of William Bellew, died 1772, and to another William Bellew who died in 1826.

On the south wall adjacent to the carved pulpit is a window depicting the crest of the Bellews - an arm enbowed, habited, grasping a chalice pouring out water ('belle eau') in reference to the name of Bellew. And the motto is in accordance, 'Tout d'en haut'.

The church used to be lit with bottled gas. The whole gas lighting system is still in place and thought to be in fairly good condition requiring minor work only to bring about full restoration.

In short, what was once a ruin is now a beautiful temple, in all respects worthy of the object to which it has been dedicated.

The tower contains four bells, the heaviest being 6.5 cwt. The second bell has the inscription ' Voce mea viva depello cunta nociva' (With my lively voice I drive away all hurtful things). The third bell is inscribed 'HENRY BELLOW GENT THOMAS WELLINGTON 1709'.

The Parish Church has the dedication St Mary the Virgin. According to the 1993 census the population of the parish was 56. It is a highly rural parish consisting of isolated dwellings. Adjacent to the Parish Church are a small cottage named St Mary's Cottage, the Old Rectory and Stockleigh Court. A small but dedicated congregation regularly meet for worship, social functions and to raise funds for the necessary ongoing maintenance that a building of this age requires.