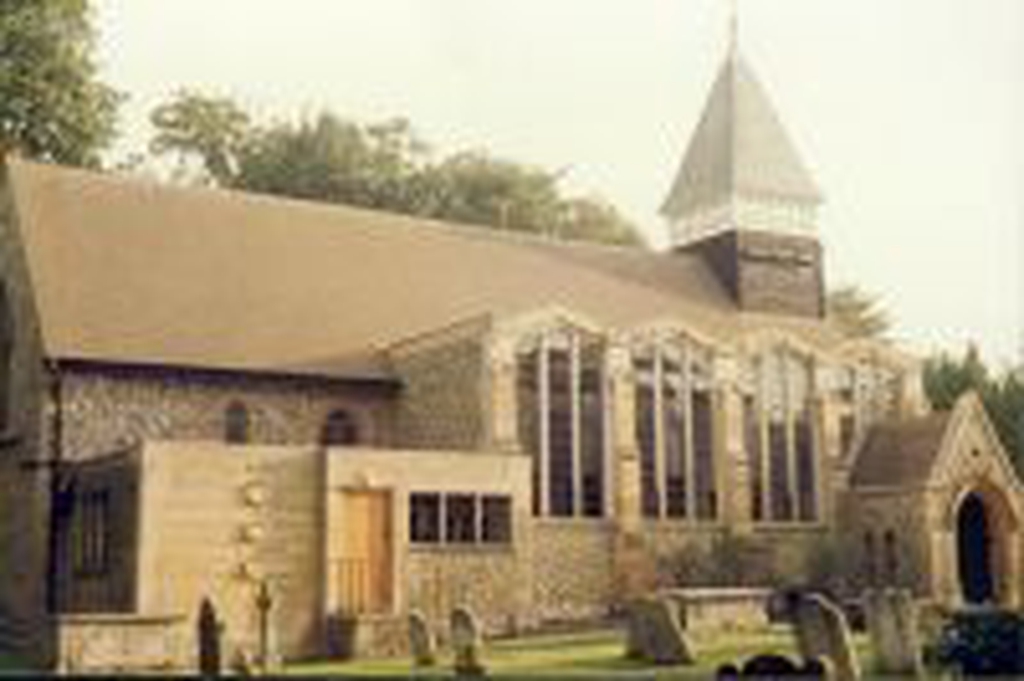 Woodmansterne, St Peter
Services and events
News and notices
About us
About the church
Find us
Rectory Lane Woodmansterne Banstead
Get in touch
(01737) 423892
Facilities
More information
Social
Edit this Church

It is probable that there was a church on the present site as early as the 9th century. Certainly Woodmansterne was mentioned in the Domesday Survey of 1086 under the name "Odemerestor", which derives from the Anglo-Saxon "Ode" = (W)ode = Wood, "mere" = pond, and "tor" = high ground. The names progressed through various spellings until the popular version of Woodmansterne became the standard description in about the 15th century.

The manor was owned at an early date by Richard de Tonbridge and was in the hundred of Wallington, passing later to the monastery at St Mary Ouverie in Southwark (the present cathedral) in 1539.

Until early in the 20th century the place was simply a small sheep-farming village, largely by-passed by travellers and staying an isolated community, unknown and unnoticed.

Since 1673 the Patronage has been in the hands of the Lord Chancellor.

The Church and its records

The mediaeval building was rebuilt in the 1870's and formally re-dedicated in 1877. Much of the existing fabric was used again, though the interior furniture was renewed. The parish boundaries stretch from How Green in Chipstead to the upper part of Coulsdon (the Mount area), around Oaks Park in Carshalton and almost into Banstead. In 1847 the population was 147; in 1900, 500. By 1960 it had grown to about 8,000 and the existing church became too small. Accordingly the North Aisle and the new vestries were added in 196l.

Registers of baptisms, marriages and burials are almost complete from 1566. Some interesting Churchwardens books also survive from 1713. The parochial Minute Book was started in 1875, nearly 50 years before the institution of a Parochial Church Council - a rather unusual effort for so small a parish. Some pictures of the church as it was in the 18th and 19th centuries are kept in the vestry together with the large Institution key of 1877.

The Lych Gate at the entrance to the churchyard in Rectory Lane was erected as a memorial to the men of the village who were killed in the 1914-18 War. Subsequently the list of names was enlarged with the addition of those who died in 1939-45. Just inside the gate may be seen an old horse-mounting block.

The porch is that of the 1877 church, having been moved outwards when the 1961 extension was built. Just inside the church, in the North Aisle, is a piece of stone from the old church.

The font was restored in the church in 1945. It was made in 1845 and stood in the old church until 1870. Some mystery attaches as to what happened to it then; it is believed that it was abandoned in the churchyard until its restoration. The cover is of fine carved 17th century woodwork, the keys of St Peter being added in 1945. There is also a small portable font, made of marble and dating from 1730. This can be seen on one of the south window sills.

On a pillar close to the font can be found a list of Rectors, together with their Patrons. This starts in 1293.

The organ was built and installed by Hill, Norman and Beard in 1891. Apart from minor repairs in 1933, virtually nothing was done to it until 1962, when plans were put in hand to rebuild it and so make it a more fitting instrument for the enlarged church. The original Victorian craftsmanship was obviously of a high standard. 1966 saw the completion of the rebuilding and enlarging by Corbett and Bielby of Epsom.

The history of this is obscure but it is known that it was given to St Peter's by the Rector of Beddington in 1877.

There are few old memorials but those of interest are in the north-west "gallery". The oldest is that of the Revd Joseph Casbard 1730. Some tomb-stones in the north churchyard date from 1771. The Lambert family lived in Woodmansteme from 1272 to 1786 at Oaks Park; from this residence, now demolished, derived the names of the famous races at Epsom, when the property belonged to the Earls of Derby.

Most of the glass is late Victorian. The plain glass on the north side does much to lighten the church, which must have been very dark with only the coloured lights which are now set in the plain glass, and the similar windows on the south side. A few fragments of 16th century Flemish glass, depicting St Paul, are preserved in the "gallery" window, itself containing 13th century stone work. A rather unusual window of German origin, showing Christ as the Way, can be seen over the door leading from the chancel to the vestries.

On the outside east wall is a bench mark which is the same height as the cross on St Paul's Cathedral - 365 feet. Near is a small piece of gilded stone from a bombed reredos in St Paul's.
×